KTM started our riding test with the standard 790 Adventure model on the twisty roads around Big Bear, California.

Sitting on the machine before the ride, I took a few minutes to fiddle with the electronics menu, controlled by the left handlebar. Although I left it in Street mode, it was easy to switch between the different options, much easier than previous KTMs I’ve ridden. I did not change the TFT display either, but that seemed easy enough to do.

I put the seat into the lowest setting, and left the windshield at its highest setting, and did not change positioning of any of the controls. If there was something I didn’t like, I could change it during one of the photo stops, I figured.

I needn’t have worried, as once we got rolling, I bonded with the bike very quickly, in some sort of man-machine meld that felt almost futuristic. I didn’t turn into an InstaHoon©, but I felt more comfortable than I’ve ever felt on a new-to-me motorcycle. Everything fit: the seat, the handlebars, the controls, the windshield, everything was exactly where I wanted it to be. 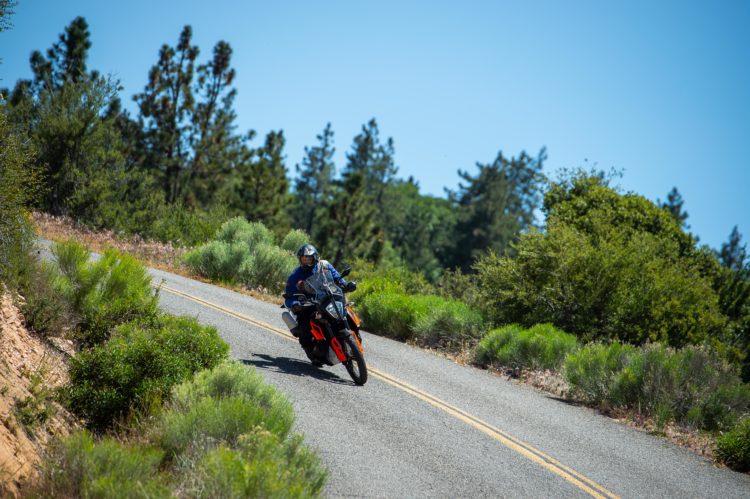 Since people come in different shapes and sizes, I doubt this would be the case for every other rider, but I will note this is one advantage to buying KTMs: I’ve always found their bikes are ergonomically superior to Japanese machines, at least for my 6-foot, 220 lb self. Their test riders are North American-sized guys (with the exception of one humorless Spanish midget, but he’s got nothing to do with the adventure bikes).

As there was a bit of traffic on the streets, we held a slightly slower pace than I’ve taken through the Big Bear-Lake Arrowhead route on other adventures. Still, when we could open it up, we did, and the 790 soon showed its street capabilities.

Although 94 hp might not sound like a lot to today’s jaded adventure bike buyer, it’s still a lot of jam, especially when matched to a lightweight motorcycle (roughly 450 lb, fuelled up), good suspension and good brakes. Remember, it’s not just how much power you have, it’s how you’re able to use it, and the 790 Adventure puts all that power to ground very well, thanks to well-tuned suspension. 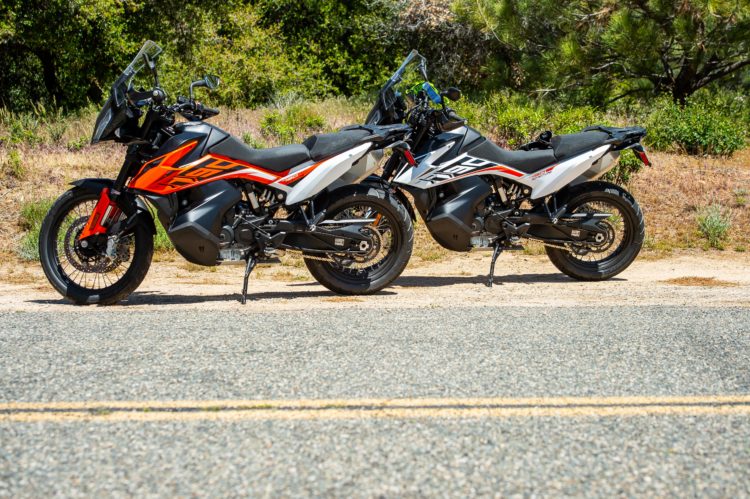 This version of the bike is available in orange or white.

KTM seems to be marketing this bike to the “set it and forget it” crowd, with its non-adjustable suspension, but I must say it worked for me. At silly speeds, yes, I could see some complaining it might be a bit soft (the fastest rider in the street sections was suggesting this), and it would certainly be unsuitable for a fast pace off-road. But it’s not intended for those roles; it’s for motorcyclists who just want to ride without fiddling with micro-adjustments, and the compromises suited me very well.

I’d just wrapped up a trip on my ancient DR650 before flying to Cali, and the first time I hit the 790’s front brakes, I had to back off quickly and grimly remind myself: “Yes–that’s what that’s supposed to feel like.” The dual binders up front are sharp, and a big change from the wooden brakes I’m used to on 650-class Japanese machines.

But once I got used to them, I’ll say that I was impressed with the brakes’ smoothness, especially when I was easing off the lever. And of course, it’s always re-assuring to know that even if you do manage to screw up a bit, there’s leaning ABS, traction control and motor slip regulation all working together to keep you in line, although I thankfully didn’t need that. Still, when you’re on unfamiliar roads, it’s good to know that if things go pear-shaped, you’ve got electronic brains to help, if you need them. Unless you’re an idiot, you should be able to stop in time. 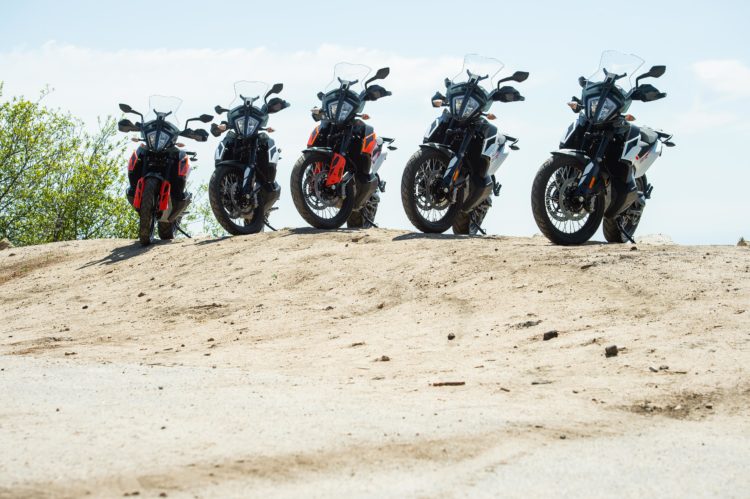 Not a hard-core offroad bike, but you can tootle around in the dirt a bit if you want.

The engine itself was a delight, far more enjoyable than any other parallel twin I’ve ridden. The exhaust note does sound a lot like KTM’s bigger V-twins (with a bit of parallel twin valve clatter only detectable if you’re wearing earplugs), and the power delivery feels the same. If the 1290 is a rocket ship powering out of the corners, and the 1090 is a jet fighter, you could maybe compare this bike to a P51 Mustang? Maybe not as much power as some of the other machines on the road, but a competent rider shouldn’t have too much difficulty keeping up to a sportbike’s pace in corners, especially on roads where you’re going to be spending a lot of time working through the rev range. Up top, the 790 might not have the peak horsepower, but it has very healthy torque output in the low-to-mid section of the rpm range.

All our bikes came equipped with KTM’s Quickshifter+, an up-down quickshifter that allows you to bang between gears without using the clutch. I’ve used it before on the 1290 Adventure S, and appreciated it on drag strip-style runs in the desert, but hadn’t used it much in the twisties.

On the 790, I found the Quickshifter+ to be a mixture of good and bad. At lower rpm, the quickshifter is notchy, not smooth. It’ll shift you from 1st to Neutral if you’re not careful, instead of 2nd, and the same goes from 2nd to 1st. I quickly learned to recognize the feeling of this, and was able to avoid it, but I didn’t like it. It may be an intentional feature, and maybe it’s just a matter of my shifting technique, but I wasn’t happy when this happened. 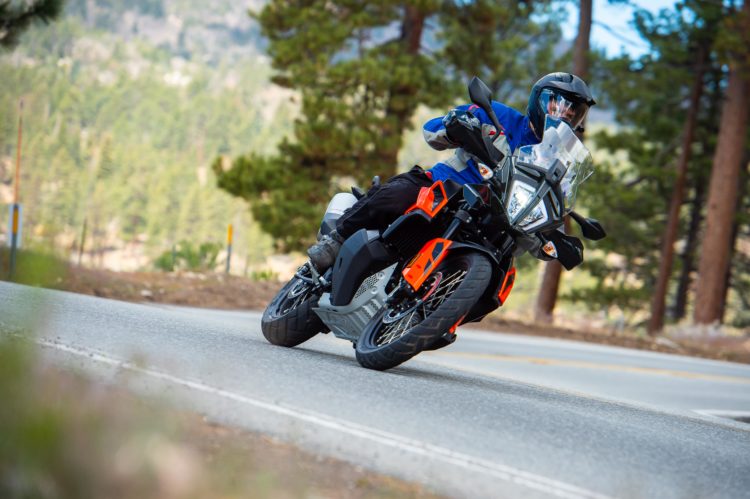 I even surprised myself by dragging a boot in a few corners, without even trying. It’s an easy bike to ride aggressively.

However, if you’re on the gas coming out of a corner, the quickshifter is delightful. If you’re at high rpm, click up a gear without using the clutch and the speed just keeps building—fast, faster, fastest!. Used correctly, it’s a delight in the twisties.

The fun is compounded by the bike’s low, centralized weight. We started the day with the gas tanks filled to the top, and the machines didn’t handle sluggishly, or drop sharply once the fuel in the tank started sloshing into turns. You know that relaxed feeling at the end of a day’s ride, when you’ve burned through most of a tank of fuel, and the bike starts handling a bit better? That’s what these machines felt like from the very start of the ride. Side-to-side transitions were easy-peasy. This bike just wants to go where it’s told. 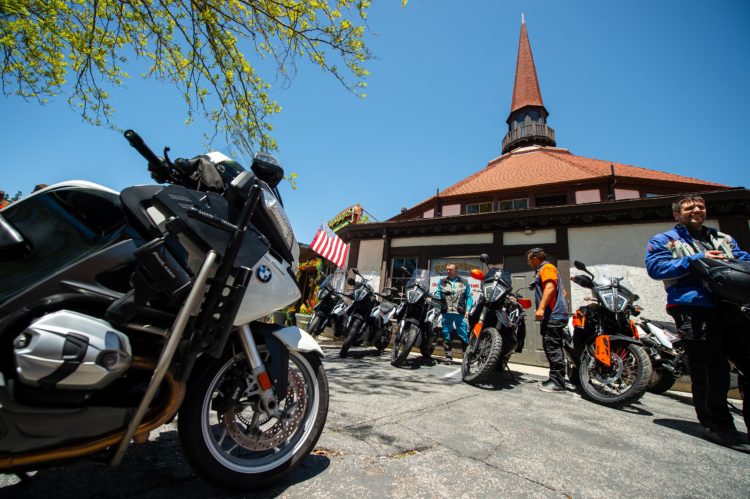 Guess who was waiting for us at the lunch stop? The parking lot was full of CHP motorcycles; the officers were interested in our bikes, but nobody offered to trade.

All of our riding was in the mountain twisties, with no extended highway mileage to see how the windscreen and bodywork would handle extended windblast. I was curious to see how the 790 would handle the long-haul slog, but without getting a chance to do so, I’ll just say the fuel tank placement should cut a lot of the wind, and the windshield’s shape and size seemed to be a good compromise that would work on tighter roads and on the highway. Although I was tired at the end of the day’s ride, it was mostly due to the heat and lack of sleep from flying across the country. The bike itself didn’t wear me out–there were no oppressive vibes in the handlebars, chassis or footpegs. The seat worked well for me, too–plenty of room to move around, and comfortable enough.

All in all, a bike that’s comfortable, easy to ride at a fast pace, and enough electronic gadgetry to bail you out, should you make some bad decisions. 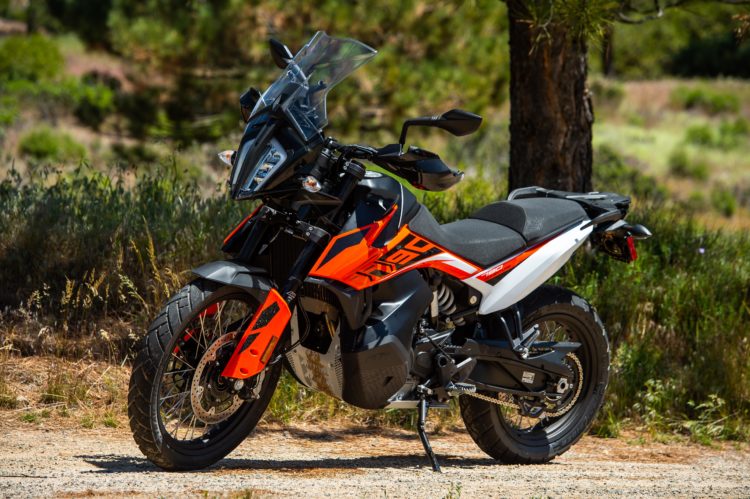 The fuel tank is so low, and so bulbous, that you almost feel like you’re riding an ADV bike with a big boxer engine.

If you’re looking for a middleweight adventure bike to stick mostly to asphalt, with some mild off-road exploring, then you need to at least consider the KTM 790 Adventure. Even if you have deeply-held reservations about Team Orange’s bikes, you’ve got to admit that having a machine come with such useful onboard tech and big weight savings is good news. It’s going to kick the rest of the industry in the butt, and move them forward.

For me personally, my day aboard the 790 Adventure might have been the best street ride I’ve ever had in California, and the only bummer was handing the keys back at the end of the day. I would have loved to spend another two or three days riding this in the twisties, exploring and expanding my own limits, because this bike was certainly capable of handling everything I threw at it, and then some.