I decided to approach the day realistically, and instead of trying to keep up with all the faster riders, I’d find out the answer to this question: How does the KTM 790 Adventure R work for a KLR/DR650 dual sport rider, who wants to move to the next level?

Thankfully, KTM didn’t throw anything at us that we couldn’t handle. The day’s ride was challenging in parts, but did a great job of showing off the machine’s strengths, mostly over Jeep-friendly trails from Big Bear down towards the plains near Pioneertown. 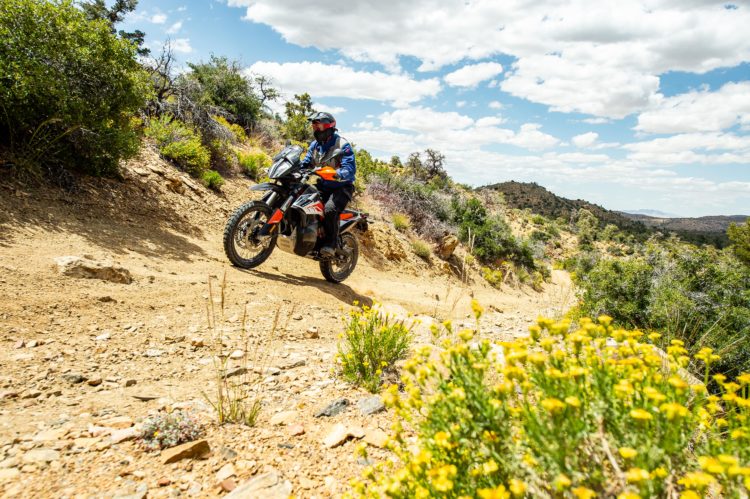 I was with a group of three other journos, with a couple of KTM handlers in back, and KTM test rider Quinn Cody up front. You should recognize that name—Cody’s got multiple Baja 1000 wins to his name as well as Dakar appearances, and some high profile hard enduro work as well.

As for the other journos, two had off-road racing experience, the other had plenty of seat time aboard ADV bikes in the 800-1200 cc range. They were all much more comfortable pushing the bikes harder in the dirt than I was, and I maintained my usual overly-cautious pace on the 790 (not ideal, for sure, but better than getting in over my head).

The main differences between the 790 Adventure R and the base model are tires (Metzeler Karoo 3), a higher seat, Rally riding mode fitted as standard, and the WP-sourced Xplor suspension.

Going down the list, I was extremely happy with the Karoo 3 tires considering the terrain we were in. If I was riding at a blistering pace off-road, maybe not, but for what I did, they worked fine. I never felt the tires held me back, and in the short street section at the end of the day, they impressed me on pavement as well.

The taller seat on the R model was definitely not to my liking, as it made things dicey sometimes when the bikes were stopped. Throwing a leg over would be difficult for shorter-inseam riders like myself if the bike had panniers.

The higher seat, I didn’t like so much, with my short 30-inch inseam. I’m a reasonably tall guy, but with short legs. I found the 790 Adventure R was fine if you were rolling, but thanks to the wide, tall seat, there were times when I had to park strategically to make sure I’d be able to throw my leg over the bike. Saddlebags would make this even more difficult.

Rally mode was extremely interesting, as it’s KTM’s way of giving back some control of the bike’s electro-brains to the rider. Offroad mode is fairly hands-off in its usage. You select the mode, and let the bike’s onboard gadgetry decide how much rear wheel slip you should have, and how sharp your throttle delivery should be.

Contrast that with Rally mode; once selected, the rider can choose between three different power output profiles, from mild (Offroad, Rain) to wild (Street). Then, once you’re underway, you can select one of nine levels of rear wheel slip, from minimal to max traction control. It’s quite easy to select on-the-fly, and if you really want to rip around in the dirt at speed, could be beneficial.

Zac to photographer: “Can you Photoshop me on to Quinn Cody’s bike in this picture?”

KTM’s Cody said he mostly leaves his around the mid-range settings, and I shifted through the various settings at different points in the day, finally settling on a bit more slip than that.

While we’re on the subject of engine modes and traction control: towards the end of the day, we were diverted down a slightly looser, more rocky trail with some hills, and given a chance to try out Offroad mode.

In the past, you’d have to use a fair bit of clutch to traverse this sort of terrain, especially on a big bike like the 790 series. However, putting it into Offroad mode lets the electric brains take care of your traction management, not your clutch hand. At least, that’s how it should work. I managed to take a bad approach to one of the hills and got stuck enough that I needed a push. If I’d just backed down a good distance, hopped on and pinned it, I probably would have been fine, but old habits – like trying to finesse the clutch – die hard. 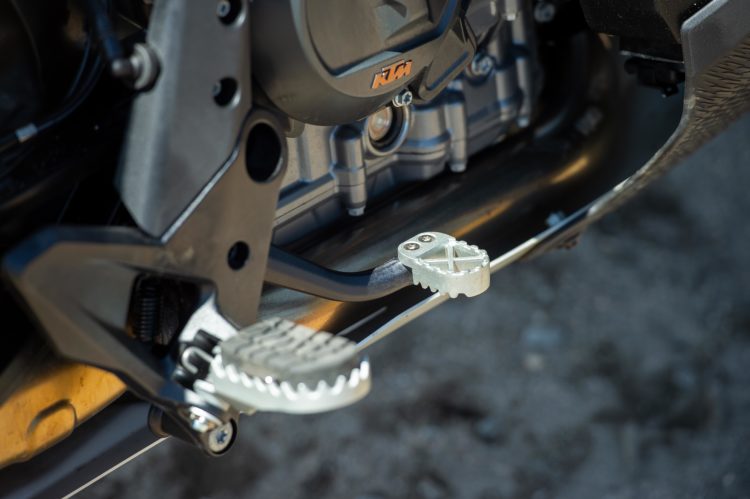 There are many trick little details on the 790 Adventure R, like this removable, reversible brake pedal tip. Want to raise it for offroad riding? Just undo the screws, and flip it over.

I was very impressed at other points, though, when going through fairly loose terrain. The bike’s Offroad mode gives it the same easily-manageable low-end grunt that I’m used to on big-bore singles, powering through power-sapping slag without needing clutch work.

The more I rode it, the more I could feel what the electronics were doing, and the more I appreciated it. I was still riding at a poky pace, but I felt far more comfortable on this machine offroad than I ever have on a mid- to large-sized adventure bike.

The electronics were a big part of that, but then so was the weight distribution. As I mentioned in the street riding section, having the fuel sitting so low in the bike made it much easier to handle, and it was even more of a benefit off-road than it was on pavement. While the sand sections were still uncomfortably unfamiliar to me, I was happy I didn’t have the weight of all that gas sloshing around over the engine. At 450 lb fully fuelled, the Adventure R is already a light middleweight, but it’s even better when you realize how much more efficiently that weight is distributed.

The WP Xplor suspension worked perfectly, without any front end wonkiness. The rear end never lost traction chunking its way up loose, bumpy hills. It wasn’t just my slow riding, as all the other journos on the test were saying the same thing.

But if I had to choose this bike’s biggest benefit off-road, I’d have a hard time picking between the electronics, the centralized weight, or the suspension. The Xplor suspension is the biggest difference between the standard machine and the R version, and it works well right out of the box. Although it’s fully adjustable in front and back, I didn’t tweak it at all, nor did I notice anyone else playing with their setup. Just the opposite–all I heard was talk about how well it worked.

It should work well, as it’s basically the same stuff KTM uses on its high-end enduros, just beefed up for the 790 and benefiting from lots of pre-production testing by Cody. I’ve ridden a wide variety of smaller dual sports over the years, many of them with pricey upgraded suspension components, and none of them felt as planted in the dirt as this big-bore machine did.

The Karoo 3 tires had plenty of grip on the street though, although I’d replace ’em if I was headed out on a transcontinental street ride.

At the end of the day, I was beat. It’d been years since I’d taken a bike of this size off-road, and as it’s just the beginning of our riding season in eastern Canada, I wasn’t in offroad-shape. Yet, I was impressed. Despite my horrible Mr. Roboto-style body positioning and hesitancy to really open it up and trust the suspension and tires, the bike had powered through everything we saw all day. I was the limiting factor, not the bike, and the longer I rode it, the more I could see that.

So how does it work for a KLR/DR650 rider who wants to move up to the next level? Once you get used to its size, I think the KTM 790 Adventure R is just as easy to ride offroad as those bikes, maybe even easier in some scenarios. You probably won’t take it down trails that are quite as narrow due to its physical size. All the electronics in the world can’t make a full-sized motorcycle enjoyable on an enduro trail. But on the more open gravel roads and Jeep trails that most 650-class riders are tackling, the 790 Adventure R seems able to handle it. 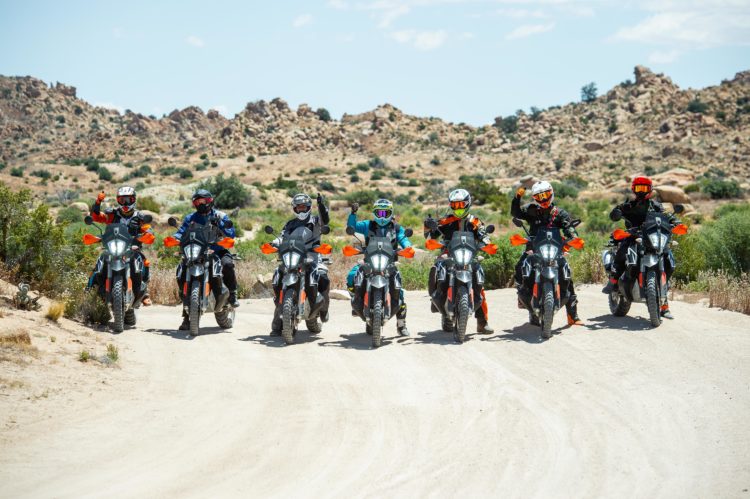 From mad talent, to Zac: everyone seemed to enjoy the 790 Adventure R immensely. I worried it might just be me getting excited, but the general consensus was that this is a machine that re-sets the goalposts for middleweight adventure bikes.

I think the user who’ll benefit most from a move to this bike is someone who’s already used to ripping around on big-bore adventure machines. If your 800-1200 class adventure bike is leaving you wanting a taste of life on the wild side, then this very well could be the machine for you. You’ll give up the raw horsepower on the street, but you’ll get far superior offroad performance in return. You’ll still have fun on the street, because you can use the horsepower that’s there to its full capability. What’s not to like?

Would I spring for the extra money for the 790 Adventure R, over the standard model? I think so, especially if I was financing it. In the long run, the bike will always be worth more to the next buyer, and in the short run, it’ll be much more fun,