I woke at 4:30 am with the best intentions to be on the road as early as possible. I remember Heather’s words last year rang in my ears, “No way do I want to try and exit Ulaanbaatar in morning rush hour”. Well I flunked that test. More on that later. I enjoyed my last free breakfast at the Zaluuchuud hotel. 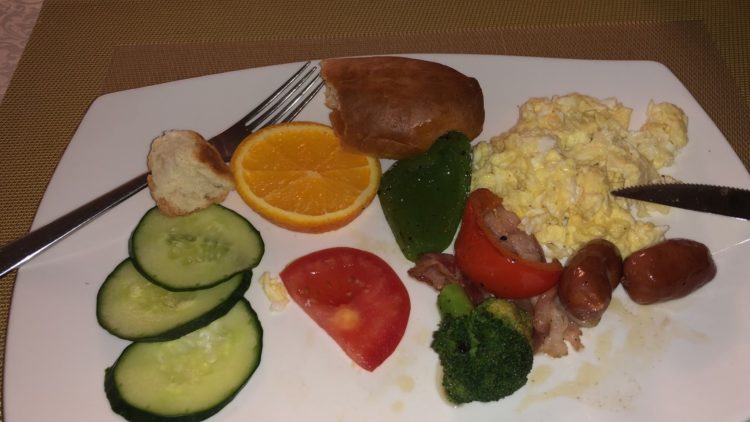 Final Breakfast at the Zaluuchuud Hotel in Ulaanbaatar

Loading the bike was slow. I wanted to be reasonably well balanced yet that was at odds with how I packed, keeping tools, and food in one pannier with all personal stuff in the other: cloths, electronics etc. With the duffel filled with camping and “on the road needs”: water, quick repair stuff, riding layers. 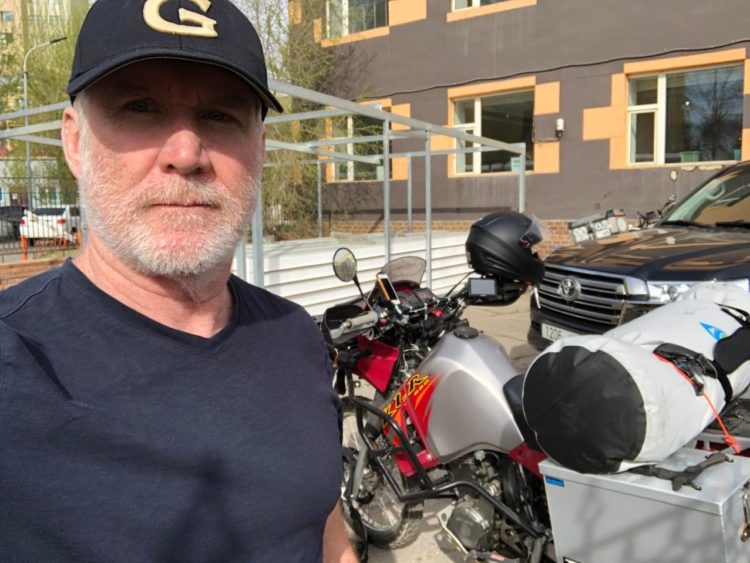 However the tool side was way too heavy so I re-balanced. Boring stuff! Meanwhile the day before the hotel parking lot filled up with four BMW R1200 GS. These are the adventure touring superbike. I wonder who’s rolling on these bad boys. At breakfast a big guy walked in and I asked him if one of the bikes was his – the short answer was yes. He was French and his English was better than my French and we worked our way through telling our particular stories.

BMW’s With The Frenchmen

These guys are doing work for BMW whether marketing or engineering test – not clear – but the machines were tricked out to the hilt. They are headed to Western Mongolia the holy grail of pure off-road adventure. In 2018 I got as far as Lake Khovsgal. My heros, Heather and Andrew, went all the way west through some of the toughest riding left on the planet – respect. 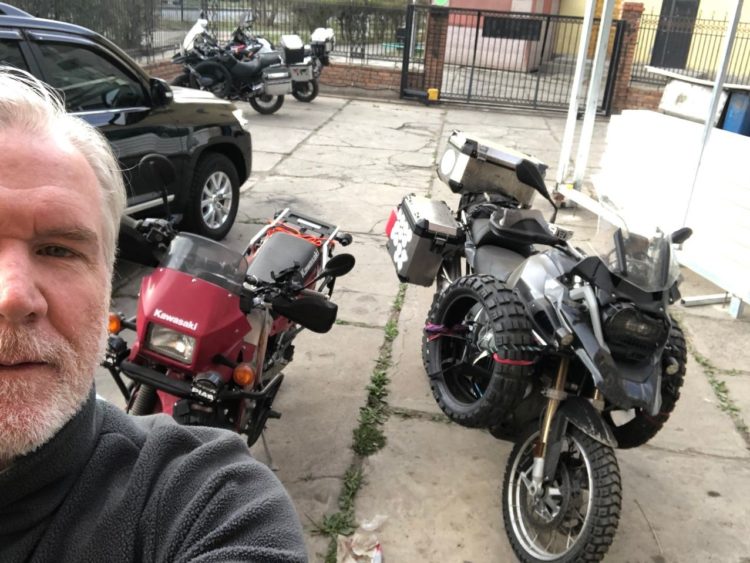 The French and their BMWs were headed to Western Mongolia

Everybody seems to arrive in Mongolia in a slightly different way. The Frenchmen had their machines trucked in while they arrived by train. When I told the big Frenchman I plan to work my way to Lake Baikal he got frustrated and from what I could gather his ability to see the lake from his Trans-Siberian rail-car was hampered by endless forest. Foiled by nature again! Seriously I sensed his preference was for 2 wheels rather than steel.

In my final preparations to leave I wondered what to do with my “second backpack” a great piece of Cobham Sea Tel schwag. This was on of several cool moral boosters that my friend and colleague Carolyn Grimes would get for next to nothing and distribute to the team marking a milestone or success. Unfortunately this pack served its purpose as a gear mule from California but now had to go – so the front desk clerk had been friendly and helpful and was thrilled to inherit this “Sea Tel” embroidered carry all. Carolyn, I suspect some Mongolian school kid will wear this proudly in the coming days. 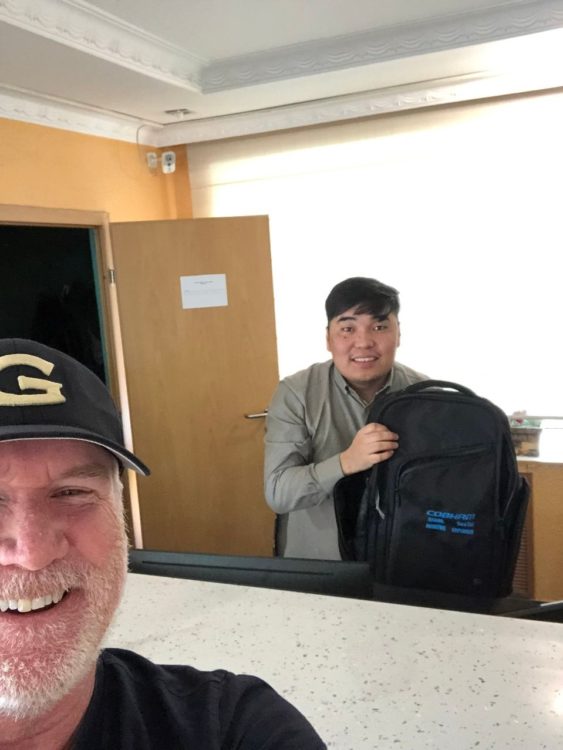 So back to “Escpe from Ulaanbaatar”. It took 3 hours to go 12 miles! Full gear, fully loaded, >80F – a hell of a way to start. The snarled traffic is like many other things old world – dealt with through manual labor. At all the major intersections during rush hour (most of the daylight hours) a policeman stands in the center and directs traffic. Make no mistake, the signal lights are fully functional but when that officer is out there (often on a little pedestal – and at major intersections with six or more tributaries he stands inside a little one man gazebo) his gestures are absolute. Dozens of cars are effectively at the head of the line and his signals governs who goes where and who stops – including the throngs of unruly pedestrians. And incidentally I have yet to see a police officer wearing a gun – old world.

Once out of the city I kept my speed under 50 MPH but the machine was running strong. The front end felt light in the slow city traffic and that worried me but at speed and bumping through potholes the control was good. I was back on the road again.

The locals speed, that is just a fact so I turned on “private pilot scan” from my Cessna days a lifetime ago and checked ahead far,medium, short then left and right rear, then controls and GPS – repeat. If they wanted to pass and it was clear ahead I’d signal. If it wasn’t and they still pulled out I’d move over and lane share. No sense proving right of way with my life!

I only had one real scare. Going over an elevated pass a land cruiser chose to go for a blind pass, as we crested, just over the summit lay a bull carcass – fresh looking – 18″ horns and all. I stayed right, land cruiser left – bull in the middle – horns facing me. For a split second I wondered what if passing the animal might bring one last leap! But today the good lord decided to bring only one of his creatures home – not two, so I rode on.

Water, food and breath are fuel for the body and I have to constantly remind myself to take all three so as I approached a small town I searched out a place to find food. Mini markets and gas station are obvious but a place where food is prepared for sale – less so. These little towns are right out of Mad Max. Flat dirt strips, no trees, no shade whatsoever, a row of ramshackle structures with signage bright in color all in the Mongolian script – completely incomprehensible to me unfortunately. Common are horse hitching rails for the herders though more and more cheap Chinese motorcycles are replacing the herders horse. I walked into one building, left was mini-mart: Lays chips, Coke, Beer, Vodka but no real food, right I saw women making sandwiches behind a closed glass door – in I went – to their surprize! They chased me out – now obvious that food was not for sale. So I gave the mini-mart clerk the universal “hand to mouth” food symbol and she said “ahh numnum” and pointed across and up the highway a few hundred yards. 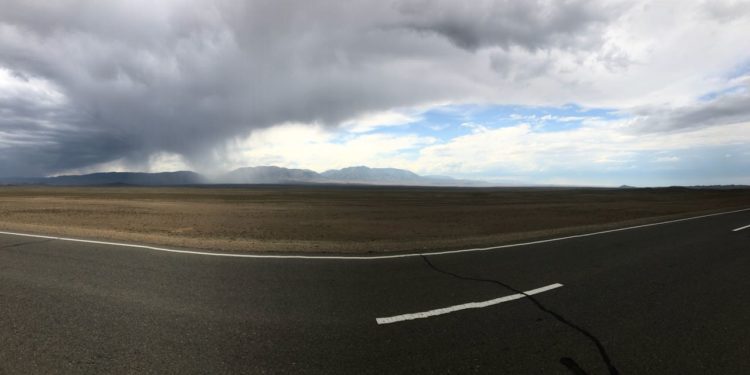 Off I went and found a delightful pastry wrapped hot dog thing with sweet tea and I was fueled for the final leg of the day into Darkhan. 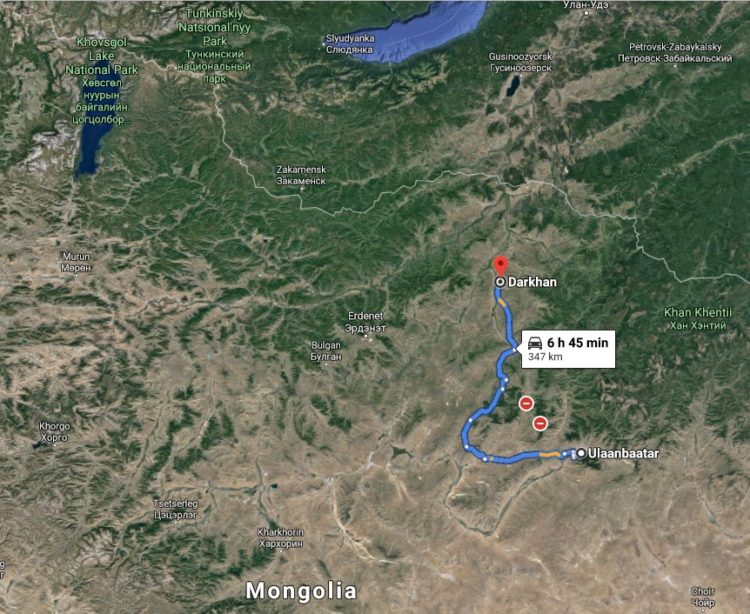 The final leg was uneventful and I arrived late afternoon to a welcome shower and dinner.

Arrival in Darkan – On My Way to the Russian Border