A while ago we told you about the St. Paul, Minnesota police department’s decision to disband their motorcycle and equestrian units.  According to a police spokesman, the major reason for disbanding the unit was officer safety.  They said that 23 officers had been injured on motorcycles in the last 4 years.  One of those officers lost his career due to his injuries.  The PD also said that disbanding the units would save the city $70,000 annually. 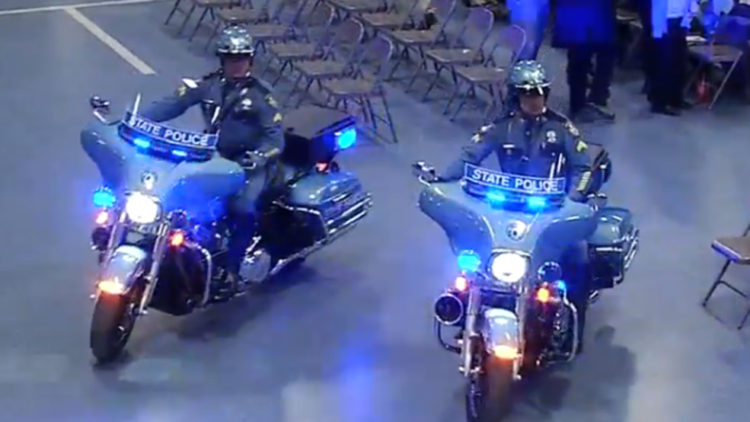 Two of the Maine State Police’s motorcycles lead the procession at the commencement of Maine’s newest police officers.

But apparently the State of Maine and Maine State Police have a different theory and they have chosen to start a motorcycle unit.  The unit consists of six motorcycles.  Colonel John Cote, the head of the Maine State Police said that the motorcycles won’t be used every day.  He believes that bikes can be a valuable tool in handling events like parades and funerals.

Troopers may also use the bikes operationally at times.  Motorcycle mounted troopers will use the motorcycles to patrol large events that cover a wide area.

“For events like this, parades, funerals, certain operational use in some big events like the Dempsey Challenge that cover a wide area, motorcycles really are actually better suited to assist with those.”

So while some jurisdictions have or are thinking about disbanding their motorcycle units, the Maine State Police see value in having them, though not in a daily operational role.  The state’s motorcycle officers have already trained with the Connecticut state police for motorcycle policing.