The Trans-Labrador Highway doesn’t really start until you hit Route 500, just past Fermont, Quebec—but the adventure starts much earlier.

Quebec’s Route 389, headed north out of Baie Comeau, is fun from the start, as long as a logging truck doesn’t run you over. It’s paved to the Manic 5 dam and in surprisingly good shape, with good corners. But as soon as you get into the dam’s shadow, the gravel begins, and so does the real ADV work. You’re going to be on unpaved forestry roads for the next 64 miles (just over 100 kilometers), and this will likely be the busiest unpaved stretch of the whole trip.

As you head north towards the outpost of Relais-Gabriel, you’ll see lots of rocks and trees on the side of the road—not much for scenery here. The road is wide, and it needs to be, because this section is used by heavy machinery and logging traffic. Be very aware of oncoming traffic as you ride here; the escort vehicles leading a convoy of heavy equipment may signal you to pull over. If so, follow their instructions. You don’t want to be taken out by a transport truck that’s running wide in a corner. 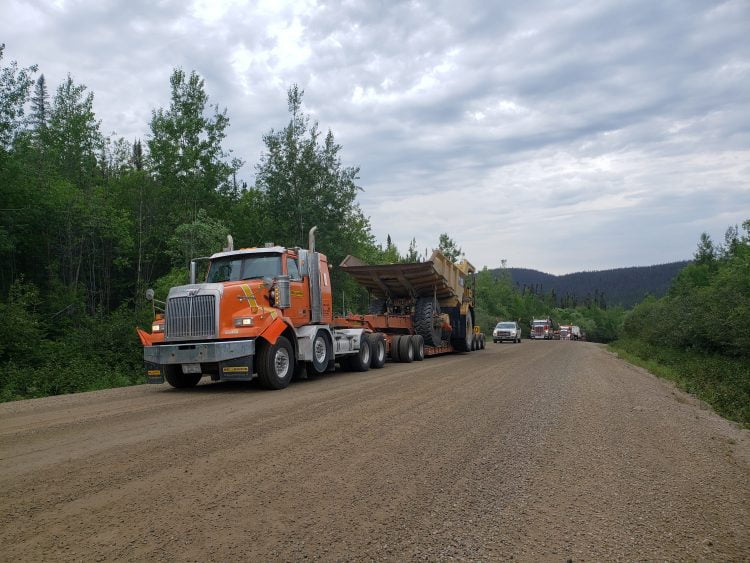 Whoa Nelly! When you see an escort truck telling you to get out of the way because there’s a wide load coming, you should listen. These big trucks don’t leave much room in the corners, and they can come in long cavalcades. Photo: Zac Kurylyk

The unpaved road can be rutted and bumpy, but it’s nothing to worry about. Like all of this route, it’s used so regularly that the government doesn’t allow it to degrade badly. Dust can be a problem, though; if there’s a long dry spell, so much dust settles on the road that it eventually builds up into a fine sand that can make for some pucker moments. To combat this, the government will sometimes spread calcium chloride on the roads, which keeps dust down but can instead be miserably slippery when it rains. It’s sort of a lose-lose situation, but not too bad if you have good tires.

Most of this section is fairly hilly, and eventually you’ll see the frontier town of Relais-Gabriel ahead, with pavement starting just before town limits. There are accommodations in this area, as well as fuel and a restaurant. It’s really just a survival stop for travelers, a set of gas pumps and a few shacks. It looks like the post-apocalyptic towns of the outback in the Mad Max films. You won’t want to spend any more time than necessary here, unless it’s raining or you want to try fishing in the nearby lakes. 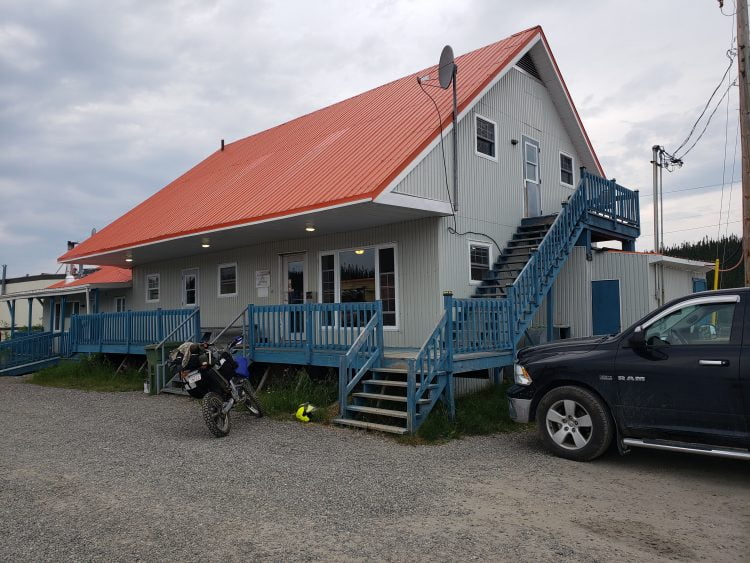 Relais-Gabriel: An outpost with a Mad Max feel. The food is supposed to be hearty, but don’t expect service in English. Photo: Zac Kurylyk

From here, you’ve got about 100 miles (160 km) of easy pavement, still rolling through hills, but with some lakes replacing the aforementioned rocks and trees. You’ll hit the abandoned town of Gagnon about 40 miles (65 km) in. It’s a weird spot, with storm drains and other obvious signs of a town’s infrastructure remaining, but no buildings. There’s plenty of safe room to camp here. Just before you get into town, you can take a detour into the old, abandoned strip mine that was the reason for Gagnon’s existence to start with. Look it up on a satellite map to figure out how to get in there—it’s not hard.

Once you get to Fire Lake, you’ll see mining camp infrastructure rising out of nowhere, almost like the orc weapon foundries from Peter Jackson’s Lord of the Rings films. If you’re in desperate need of some sort of help, you might be able to get some assistance here, but otherwise, these people are here to work, not chat, so don’t expect to mosey into camp and hang out. There are some heated guard shacks right off the side of the road, though, if you need a few minutes to warm up. . . . 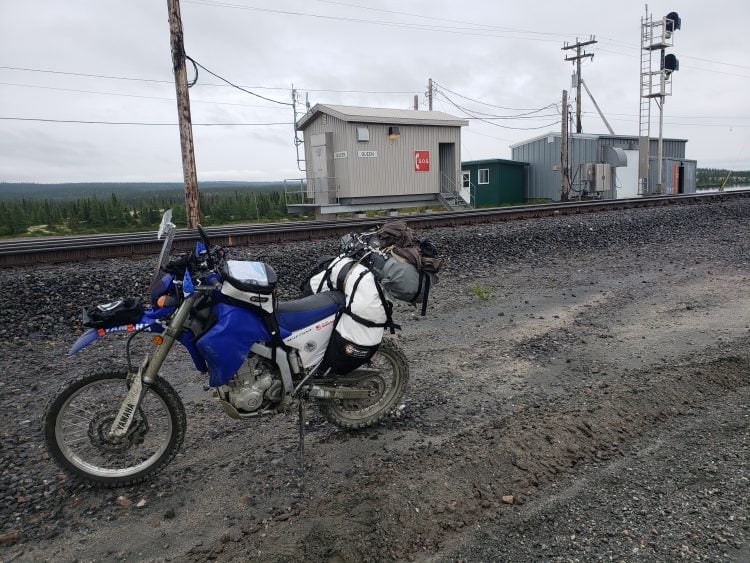 On the ride through the infrastructure that supports the Fire Lake mine, you’ll see people and buildings, but these people are working, not waiting for you to chat them up. But if you’re truly in a desperate spot, there’s a couple of places here where you can warm up. Photo: Zac Kurylyk

The road turns to gravel again once you hit Fire Lake, and you’re got about 60 miles to go before you reach pavement again. You’ll follow the railroad for much of this stretch, and the rocks and trees are replaced by open wastelands through much of it. Eventually, you’ll see the massive mining infrastructure of Fermont, where you take a left-hand turn towards Labrador City (or right to the town of Fermont). You’ll cross the border, out of Quebec and into Labrador. Make sure to take a photo with the Big Land sign! In just a few more minutes, you can get fuel, food, accommodations and other necessities in Labrador City.

Although Labrador City isn’t much in the way of a metropolis, it’s got that cool frontier-town vibe that runs through this whole trip. Sit in a fast food restaurant, and you can hear people speaking French, English and local indigenous languages, all roughly in equal proportions. It’s a very cool collision of cultures, something you just don’t hear/see in the towns to the south. 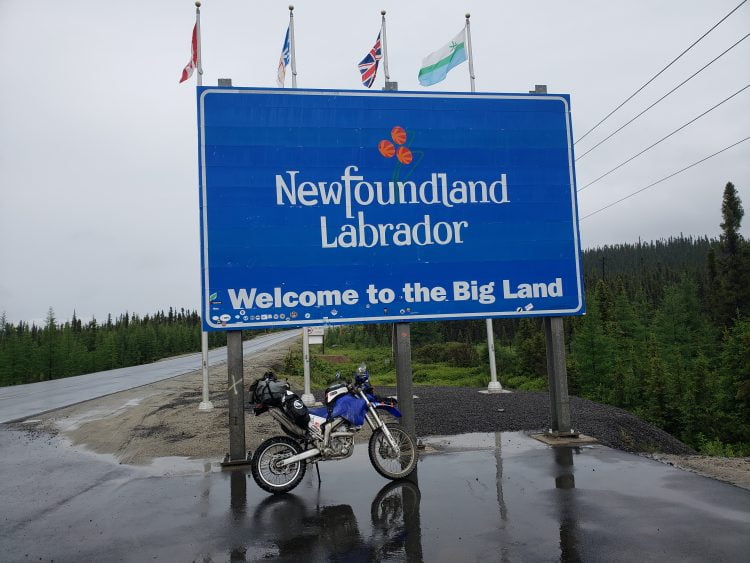 You can not, shall not, must not forget to take a photo with the Big Land sign, no matter how yucky you’re feeling, or how crappy the weather is. Take heart: Food, gas and warmth are just down the road. Photo: Zac Kurylyk

When you’re gassing up in Lab City, don’t forget to get a fishing licence, if you brought a fishing rod. You did bring a fishing rod, didn’t you? Labrador has world-famous brook trout and landlocked salmon fishing, and non-residents can purchase a licence for about $20 that allows fishing without a guide, as long as you stay close to the highway (more details here). And if you forgot to bring a bug hat and insect repellent, you’d better stock up now.

For the next 150 miles (240 km), you’ll travel a fairly tame paved road to Churchill Falls. There are, of course, many trails leading into the bush that you can explore, but there aren’t really any other towns or anything else along the way to stop at. Just sit on your bike, enjoy the 90 km/h speed limit (55 mph) if you’re on a small duallie, or chafe at it if you’re on a big adventure bike. You will pass plenty of lakes, allowing you to put that fishing rod to good use. But otherwise, this stretch can actually feel a bit anticlimactic; it’s nowhere near as adventurous as Quebec’s Route 389, and doesn’t feel any more remote.

Riding over the bridge right before Churchill Falls. Even though this is the region’s major highways, bridges tend to be small. As there’s only one road, it’s a bad thing if a bridge washes out, and just before my 2019 trip, that’s what happened to one of the major crossings on this route. Photo: Zac Kurylyk

Happily, I didn’t hit a caribou when I was in Labrador. Sadly, I didn’t see any, either. They’re fallen on hard times, thanks to the hydro projects and other environmental factors. Photo: Zac Kurylyk

You’ll encounter other travelers recharging their batteries and grabbing some cell phone signal and wifi access at the hotel in Churchill Falls. Photo: Zac Kurylyk

By the time you get to Churchill Falls, you’ll need to gas up. The next fuel stop is in Happy Valley-Goose Bay, roughly 180 miles (290 km) further down the road. If you want accommodations in Churchill Falls, there’s really only one option: there’s one hotel, and it’s owned by the hydroelectric company that runs the massive dam just outside town. There is, however, an excellent camping spot near the hydroelectric dam’s outlet gates, right on the river, with a little gazebo that will let you dry out some gear in a pinch. Any local should be able to point you in the right direction.

If you’ve got time, you can also get a tour of the hydro dam operation, and while I have never had the time to do this, others who have say it’s highly recommended. 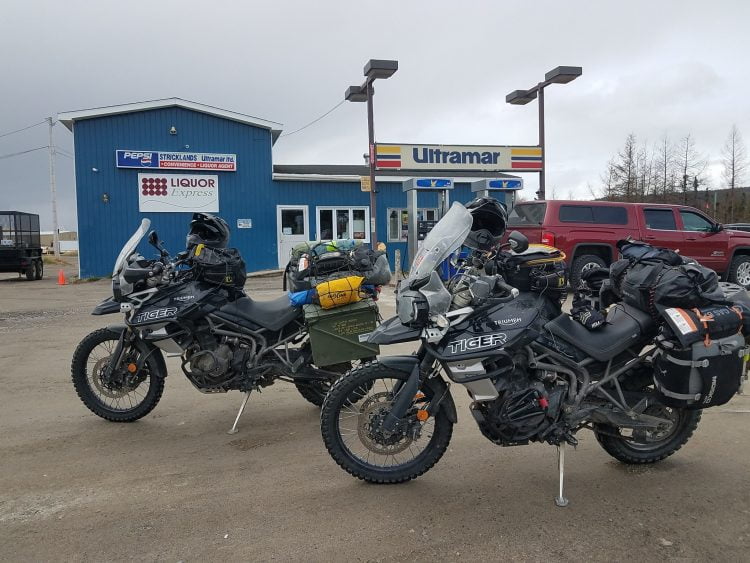 Hanging out at the only business that isn’t owned by the hydro company in Churchill Falls. Photo: Eric Foster

Otherwise, stock up on food at the grocery store, fuel up at the Ultramar (basically the only thing in town that’s not owned by the hydroelectric company), and go for a tour at the hydro facility if you can make time for it. There’s not a lot to do here, but marvel at the oddities of a company town.

There are two decent side trips you can tack on during this leg, both heading north off the main highway. The run to Schefferville starts shortly before you get to Churchill Falls; it’s 182 miles in and another 182 miles (about 290 km) out, a combination of unpaved road and train tracks. Word on the street is that this railroad has anti-bike measures installed, to keep trespassers off the railbed, as well as patrols—but you can put your bike on a train to complete the trip. This can be a tough haul, but at least there’s gas available at Schefferville, and it’s a cool area to explore if you’ve got the time.

You’ll meet plenty of other interesting travellers along the Trans Lab, if you stop to talk. Photo: Terry Burt

This gazebo is not mosquito-proof, but at least it’s a dry roof over your head, and the locals don’t seem to mind a weary adventure rider using it. You’ll find it at the mini-park near the Churchill Falls’ hydro dam outflow gates. Photo: Zac Kurylyk

From here on, the hydro lines will be your constant companion on the Trans-Labrador Highway. Photo: Zac Kurylyk

Then, at Churchill Falls, you can also head north up the Orma Lake Road. This is also a tough unpaved road, at least when it gets rutted, and is a 212-mile (340 km) return trip, with no gas at the end. Be prepared for bridge outages and other challenges, and remember that while most of Labrador is wilderness, you’ll still see traffic on the main highway. In these remote areas, help could be days away.