ADVRider.com will be covering the American International Motorcycle Exposition (AIMExpo) in late September.  We’ll bring you lots of news about products and bikes as it becomes available from the show floor.

This year’s Columbus, OH show has been “updated” with new neighborhoods that break the motorcycle world into genres.  It will be interesting to see if this new layout works and how it is accepted.

AIMExpo will once again have an outdoor area set up for demos.

But there is some other news for this year’s AIMExpo that may help boost attendance.  Last year a few brands offered test rides on their machines.  Better still, this year three new manufactures will make their appearance for the first time.

Lots of manufacturers at AIMExpo

There will be no shortage of bikes available for demo as the following manufacturers have already committed to providing demos on their machines.  Here’s the list of manufacturers so far (in alphabetical order): 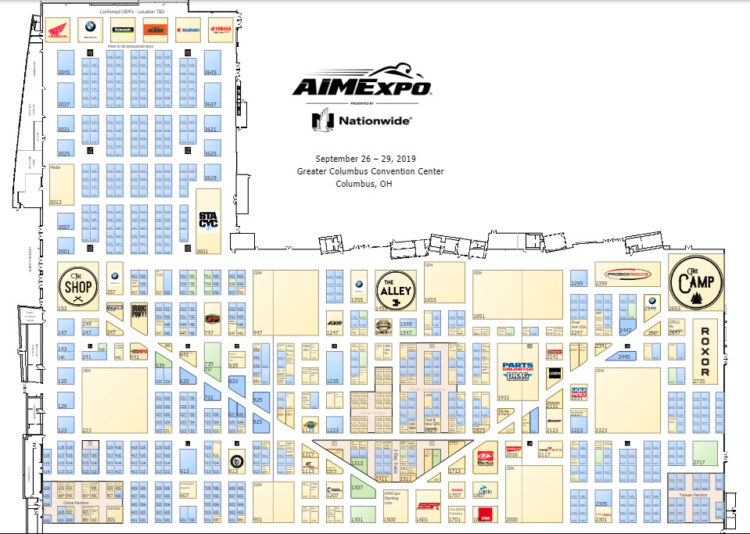 The tentative floorplan for the 2019 Aim Expo.

And it appears that the manufacturers are really serious with a very significant lineup of bikes available for demo.  Kawasaki Motors Corp., U.S.A. has confirmed it will bring a number of Ninja and Z motorcycles, as well as the new Versys® 1000 SE LT+ and the new W800 CAFÉ.

Lastly, the AIM Expo Outdoors will be open to the public for all four days of the event.  So you now have the ability to demo bikes on the following schedule:

To demo a bike, riders must have the following:

It looks like the manufacturers are stepping up their game to get people on their machines and that can only help grow new riders.