Euro brand Mash is back with another military-themed bike. This time, it’s called the Desert Force.

Mash is sold in plenty of countries, but not in the US. Its bikes are built in China, and over the years, many of them have born similarities to classic Yamaha and Honda designs, but with updates like fuel injection. Some people say this is a violation of intellectual property. Others say, if Japan won’t build the thumpers they’re asking for, why not buy them elsewhere? 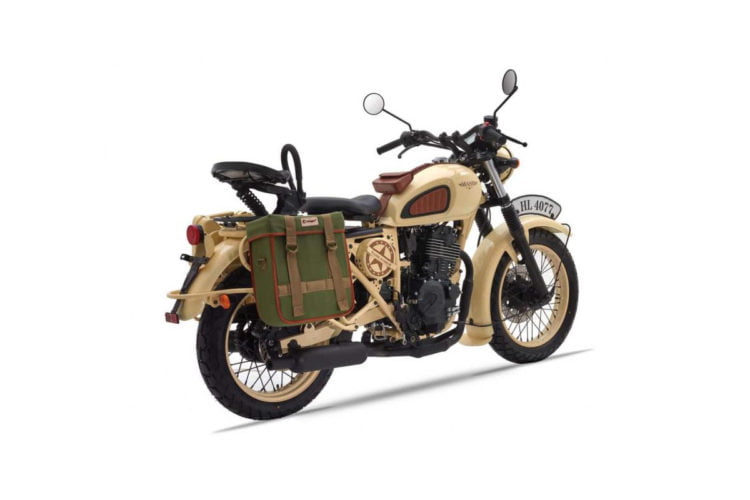 An intriguing choice for an ADV bike, perhaps? Photo: mash

Whatever your call on that is, there’s no denying the Desert Force 400 is going to stand out from the crowd with its dispatch bike looks. This thing would not look out of place at El Alamein, with a Lee Enfield in a scabbard on the front forks. It’s got the sprung saddles, the fender numberplate, and matte khaki paint. Funny, there’s no blackout cover for the headlight, although Mash did include a jerry can bracket that doesn’t look out of place. It doesn’t look exactly period-correct either, but at least the 10-liter can will improve range. There’s a haversack on the other side for luggage capacity, and that’s also included with every bike in this series.

Despite the dual-exhaust setup, this machine is powered by an air-cooled 400 cc single, with output around 27 hp. Switchable ABS is standard. Dry weight is 151 kg.

Mash won’t make many Desert Force models; production is limited to 103 units. It will have a €4,995 price tag in the EU, and comes with a two-year warranty with unlimited mileage.