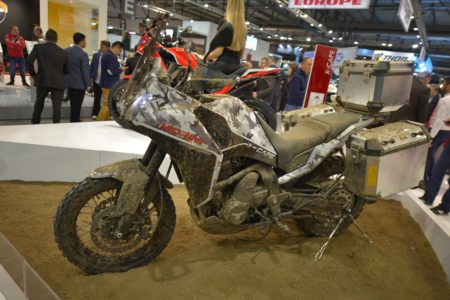 Morini stepped into the adventure riding game with its new model the X-Cape; It certainly wanted to “play dirty” against its competitors, showcasing one of the dirtiest motorcycles at the show. Literally there’s mud and dirt everywhere on this poor bike.

This mid-size engine powered machine seems to have all the characteristics that people approaching the adventure segment, would want on a bike. It has a decent size LCD color display, simple controls, nice modern lines, light in weight, a low seat position (83 cm from the ground) and adjustable pre-load on the rear suspension.

This is a 649cc parallel Chinese built engine (not officially declared yet by Morini) capable to excite even the more experienced riders apparently, for its maneuverability.

Equipped with bluetooth connectivity and a “BMWesque” look, this motorcycle stands dangerously next to its competitors, the Suzuki Vstrom 650 and the Kawasaki Versys 650. In the front, there is a short inverted 50mm fork, two nice looking floating braking rotors, with double pistons system (but no floating disk at the back).
We also have a 19″ Spoked rim in front and 17″ at the back, typical of the more street-oriented adventure bikes.

The captivating look, of this new Morini motorcycle, left many people at EICMA surprised and definitely stole the show, especially to the neighboring Sukuzi stand, where instead the new V-strom left the new look for the old.

We now have to wait now for the first release of this new exciting model from the historic Italian brand.