“This is my Coleman stove. There are many like it, but this one is mine.

Here are some thoughts on my Coleman dual-fuel, single-burner stove. Like the lines above suggest (borrowed from the Rifleman’s Creed), there are many like it, because Coleman has sold several different versions of this stove over the years, but they’re all pretty much the same unit. They’ll run on either Coleman fuel (or similar camp stove fuel), or gasoline. They’re roughly the same size, and operate the same way. 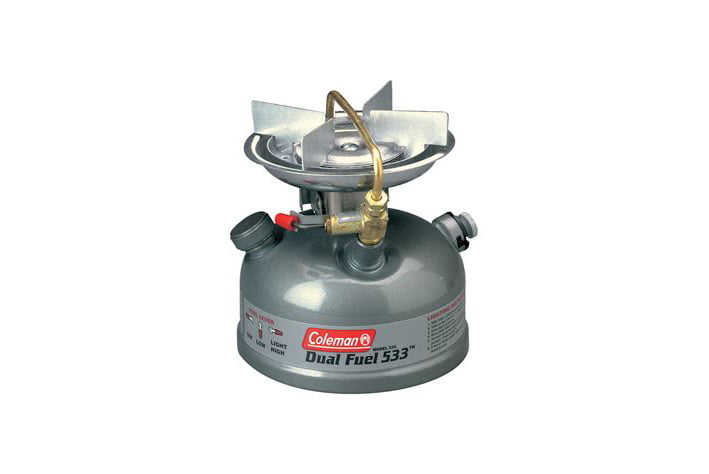 These days, this stove is sold as the 533, but it has been available under several different names in the past. Photo: eBay

You know the drill, if you went on a camping trip in a station wagon with your family in the ’70s or ’80s.  To use the stove, you first pressurize the fuel tank with a tiny pump that’s built into the fuel tank’s cap. Then, you turn the fuel on and light it. Quick, grab the pump again, and keep pressurizing the fuel tank until the stove’s heat creates its own pressure in the fuel line. From there, you can cook, until you run out of gas.

It’s sort of a clumsy operation, and probably wouldn’t pass the lawyers if you came up with it today. But Colemans and similar stoves have been around for long enough that most people can remember watching their dad fire one up for a camping trip, and use that memory to avoid incinerating themselves. For the rest of us, well, there’s the instruction sheet.

These stoves were originally designed to run on Coleman’s proprietary fuel (naptha gas, basically, also called white gas), but as that’s not always available, the dual fuel models had some slight configuration tweaks to also work with unleaded gasoline, and that’s what makes them attractive to the adventure riding community. 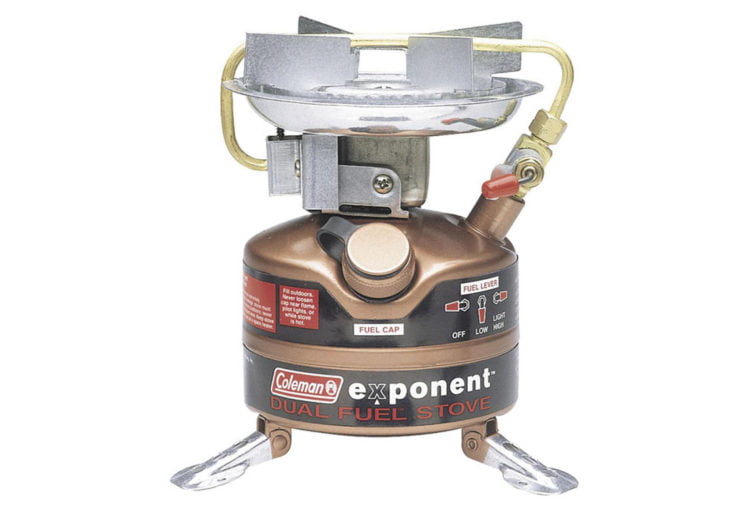 Although Coleman marketed these as backpacking stoves, they’d be poo-poo’d by the ultralight camping crowd today. Photo: Sportsman’s Guide

While compact systems like the Jetboil have their place and are certainly convenient to use, fuel availability can be an issue once you leave civilization. You might not be able to find a proprietary fuel canister in a village atop the Andes. Some sort of naphtha is a lot more likely, and gasoline is pretty much a guarantee. This means that, no matter where you go, you should be able to make your breakfast and coffee.

Ideally, you don’t want to use gasoline as a fuel if you can help it, as it tends to clog up some of the stove’s internal bits, but if you keep things clean, this isn’t really a huge problem. If something gets truly buggered up inside the stove, chances are you can order replacement parts, too. Even if your dual fuel stove is a discontinued model, many vintage parts are still available online, as Coleman collectors keep stashes of this stuff around.

In my personal experience, it’s pretty hard to break these stoves anyway, unless you let them get so rusty inside that it’s too expensive to fix. I did purchase one vie eBay that came in this condition and was unable to fix it, but otherwise, I’ve never heard of any big problems with these stoves. 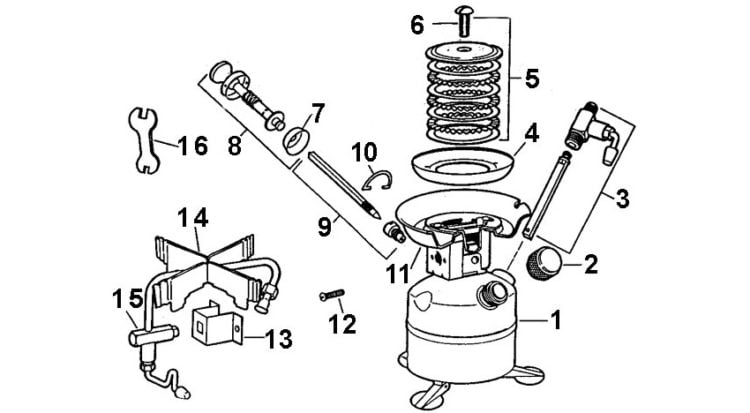 Most, if not all, of these parts are available for all these stoves, as long as you know where to look. Photo: Coleman

On the other hand, I most certainly have noticed other budget-minded adventure riders and RTW travelers using them over the years, with plenty of good things to say about them. My own stove has traveled over a good bit of eastern Canada in the panniers and packs of a wide range of bikes, and no amount of offroad vibration or dust or water or anything else has gummed it up. I usually store it in a full-sized coffee can, which protects it and also prevents the naphtha from making a mess if the fuel tank cap comes off. Alas, the one thing the stove couldn’t survive was a forgetful owner; I left it at camp during a hunting trip last season, and haven’t seen it since. I may have to start questioning my hunting buddies as to its whereabouts …

Over the years, Coleman has sold these things as the Dual Fuel, Sportster, 533, and other names. Currently, it’s listed as the 533 on the Coleman website. Except for the size of the fuel tank, and the 533’s lack of stabilizer legs, it seems to be the exact same stove that I have. It appears to be available for $64.99 at Wal-Mart in the US, and a bit more money at Bass Pro Shops, but generally seems to be harder to find than it used to be. Maybe Coleman is trying to focus on newer butane/propane stoves, as that’s much of what the market wants.

However, the good news is you can find it much cheaper than that on eBay, if you keep an eye out, or on your local Craigslist or Kijiji or Facebook Marketplace. Keep an eye on the ADVrider Flea Market, and you’ll likely find one there as well, especially if you post a Want To Buy ad. Why? Because while there are some great things about this stove, there are also some drawbacks, and people sell them as a result.

I wasn’t able to get this old Coleman going, and if I was buying another one, I’d probably buy a new one to avoid hassle. Photo: Zac Kurylyk

They’re sort of heavy and bulky (6.44” x 7.25” x 7” and 1.95 lb weight for the latest model 533), especially when compared to newer butane/propane burners, and they can take longer to warm a pot of water. The Coleman stoves also have a reputation, perhaps unfair, for being finicky to operate. If you screw up while using your Coleman, there’s the potential you could inadvertently turn it into an IED or Molotov cocktail. But then, if you’re that much of a klutz, should you even be riding a motorcycle in the first place?

So I say this: I don’t think the Coleman dual-fuel stoves are better than every other stove on the market, but they do some things very well. They’ve been getting the job done for decades, and they can do it for you. If you’re wondering what stove to buy for your next camping trip, eye up the dimensions, and if you can find a deal on one, go for it. Just try not to lose it on a hunting trip, like I did.