The new Mini Cup series will feature four classes of racing for racers aged six to 14. Racers 14 and younger will race in the 110cc, 160cc, and 190cc classes. There is also a separate “adult” class for racers 15 and older on the 190cc machines.

Mini Cup to use Ohvale Motorcycles

The Mini Cup series will use Ohvale GP-0 motorcycles, which are designed for track use. You can find out more about the Ohvale motorcycles at Risemoto. 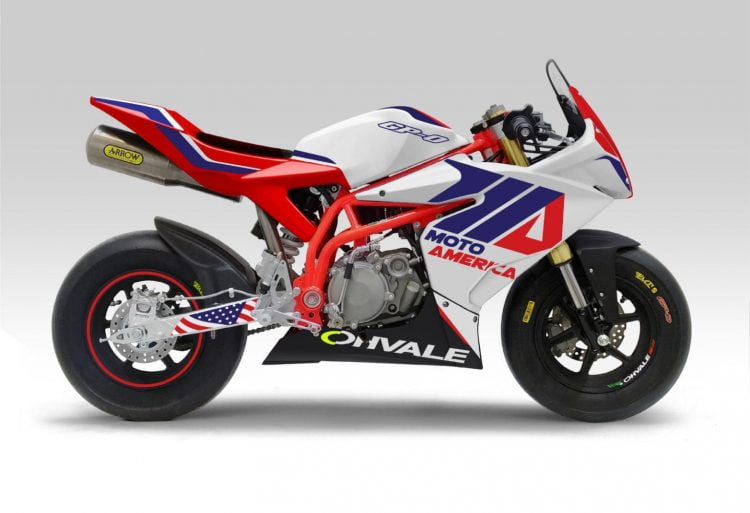 The Ohvale GP-0. It will be the machine competing in the new MotoAmerica Mini Cup series.

The move to get younger riders into racing is one of the Mini Cup’s key concepts. According to MotoAmerica President and former World Champion Wayne Rainey:

The bike [the Ohvale GP-0] is basically a miniature GP racer and serves as an ideal platform to get kids and their families on track and racing. We saw the need to provide an avenue for kids who are too young to race in our Liqui Moly Junior Cup to get started and work on their skills before moving up to bigger bikes. We’re excited about this and can’t wait for it to get rolling at Road America at the end of May.”

“This is an exciting time for road racing in the U.S. There have been few paths to lead American youth riders to start training for a full-time U.S. or international road racing career. MotoAmerica will now promote a youth feeder system to ensure that more young racers can follow in the footsteps of the Kenny Roberts, the Wayne Raineys and the Cameron Beaubiers of the world.”

It’s an exciting time for young racers and MotoAmerica is helping to pave the way to help families in developing high-level motorcycle road racers. Interesting times, these.