It’s funny what sort of things go through your head during a motorcycle crash. Everything happens in a split second, yet somehow, you manage to consider so many things while it’s happening.

Traveling a paved road in the Peruvian Andes, I came out of a bend and saw a little dip in the road. Nothing unusual. I had ridden through hundreds of these drainage dips, sometimes filled with water or mud, and nothing ever happened. 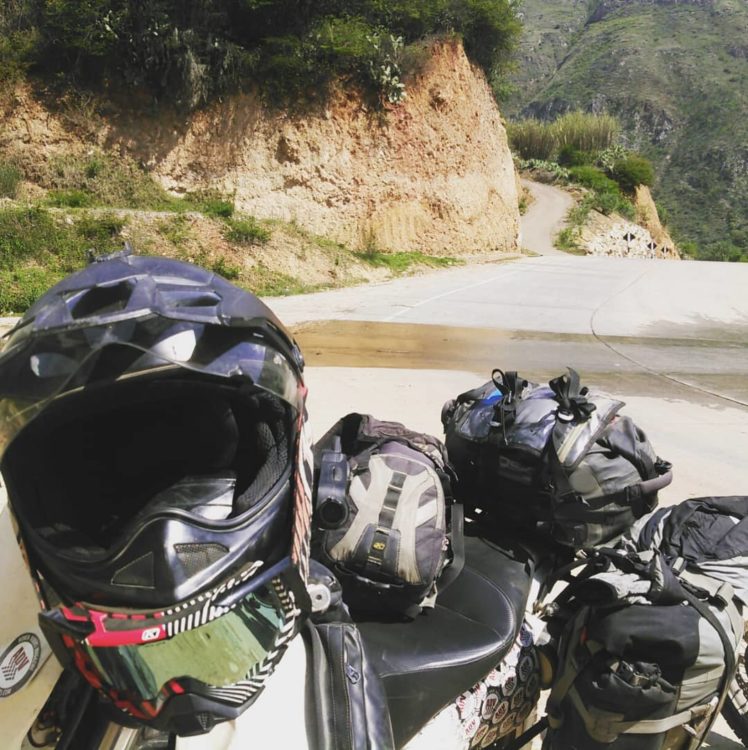 This time, the dip was filled with water and mud. When I suddenly felt my rear wheel slip, I knew I was going down, and there was nothing I could have done to save it.

When I hit the ground at about 35 miles per hour and began sliding under my motorcycle, I remember being annoyed. Not scared or in pain, but annoyed. “I probably broke my forearm, which means I’ll have to go to the hospital. I really don’t have the time for that now. My jacket sleeve is probably in ribbons. Great. I’m sliding uphill. That is so weird,” I thought to myself as I skid, fallen on the left side, my loyal Lucy on top of me.

When I finally stopped, clutching my forearm – the pain was searing now – I knew I had to get myself and the bike off the road, pronto. I had just passed a truck, and Peruvian truck drivers aren’t exactly famous for their sensible driving techniques.

Once off the road, it was time to assess the damage.

Lucy had a few scratches on the tank, and the left handguard got a little bent out of shape. Other than that, my bike was unscathed. I’d never gone down on a paved road with this motorcycle before, so I was glad nothing happened, and I could carry on as usual.

Trying to tuck and roll as I fell, I landed squarely on my left forearm and it got most of the impact. At first, I thought it was broken or fractured but it turned out my bones aren’t that easy to break – especially when protected by D30 armor. I got a painful bruise, but that was all.

I was certain my gear was done, but to my astonishment, there wasn’t even a scuff mark on my Artemis jacket. Nothing whatsoever! I couldn’t believe my eyes at first: my forearm took most of the impact, then slid on pavement for some eleven feet, and I expected the sleeve to be in pieces. Instead, it didn’t even have a mark. 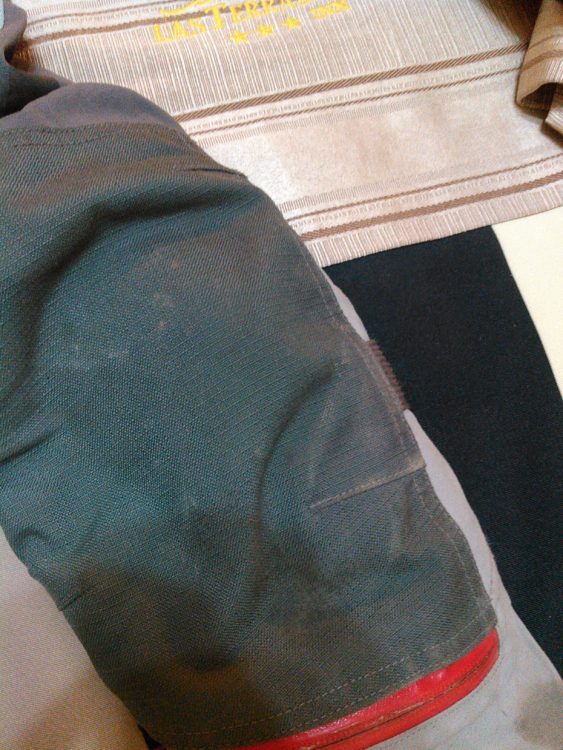 Companies may sometimes exaggerate to make things more appealing, but Klim’s tagline “this is hardware, not apparel” proved to be 100% true to me that day.

The Artemis pants fared a little less fortunately. I had all my vents open and my pocket was full of stuff like lip balm and coins, and all of that probably contributed to the left thigh ripping up a little. The damage was minimal however and with a GoreTex patch kit, I should be able to stay dry in the rain regardless. 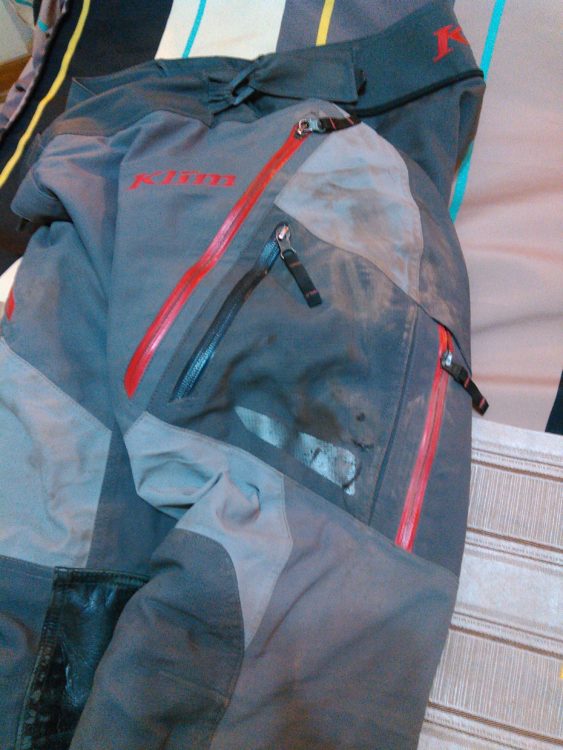 All in all, I was gob smacked how well Artemis worked. And how important it is to have gear that fits. if I was wearing gear that was too loose or big (I used to buy men’s, since not much was available for women), my forearm might have been a lot worse off. 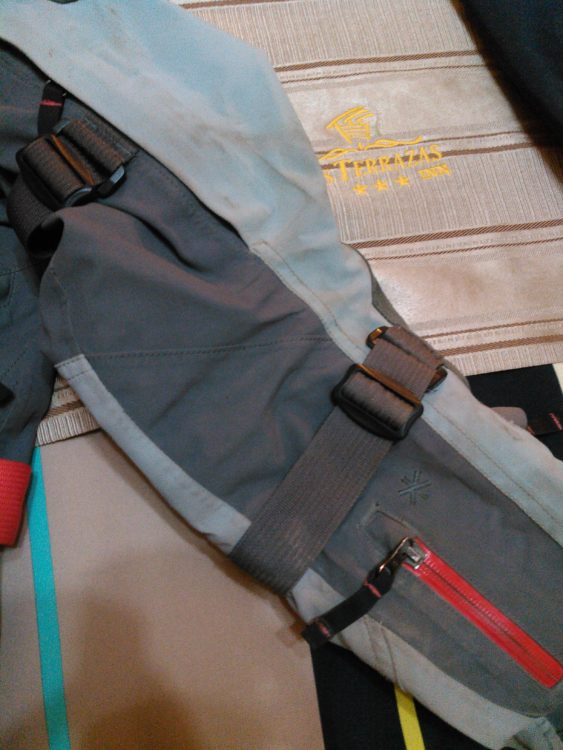 Just as I was sure the Artemis was done, I feared my left Mosko Moto pannier would be badly damaged, too. After all, isn’t it what most riders fear about soft luggage – that, during a crash, it just wouldn’t hold?

Mosko Moto held. Not only the bag is still intact – it is still waterproof, too. There are a few small scuff marks on the bottom where the impact was the biggest, but the fabric held, and there aren’t any holes in the bag. 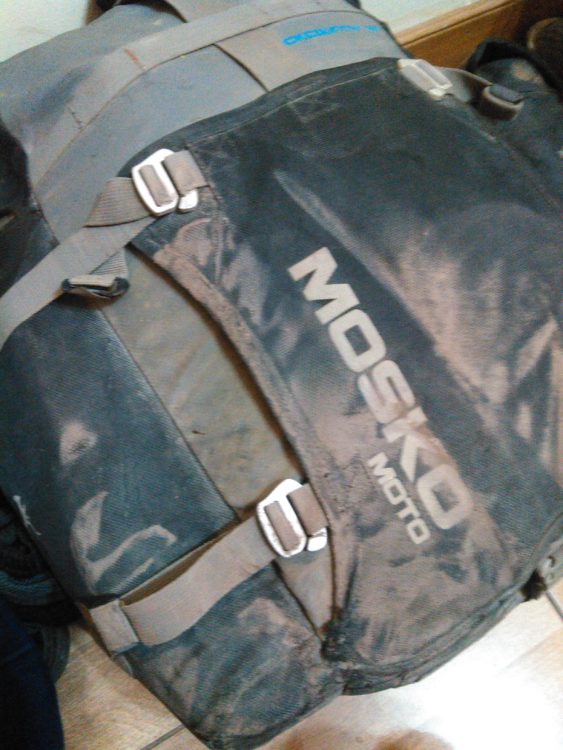 Crashing is no fun, whenever it happens and in whatever circumstances. My crash, all in all, wasn’t that bad. The speed was fairly slow, I avoided the oncoming truck, and nothing was broken.

Still, I felt a little shaken right afterwards. At the same time, I knew I needed to get right back into the saddle because left unchecked, the fear grows.

For the rest of the day, I felt a little nervous whenever I approached one of those drainage dips in the road and slowed down a lot more each time when I had to cross some water, gravel, or sand patch. Other than that, however, I didn’t let the crash affect me too much and by now, my confidence is fully restored.

So what’s the bottom line here? ATGATT (all the gear, all the time), of course – but it also matters what gear. It doesn’t have to be the most expensive, high end stuff, but do make sure your gear has high safety standards and the best armor there is, because in a split second, it can make all the difference.

More on Mosko Moto and Klim