The NICB also published data about which states and cities had the highest incidence of thefts.  The state of California led the way with 7,035, followed by Florida, Texas, New York and South Carolina.  Unfortunately, the NICB didn’t adjust the figures for total registrations, so it’s difficult to determine the actual theft rate each state has. 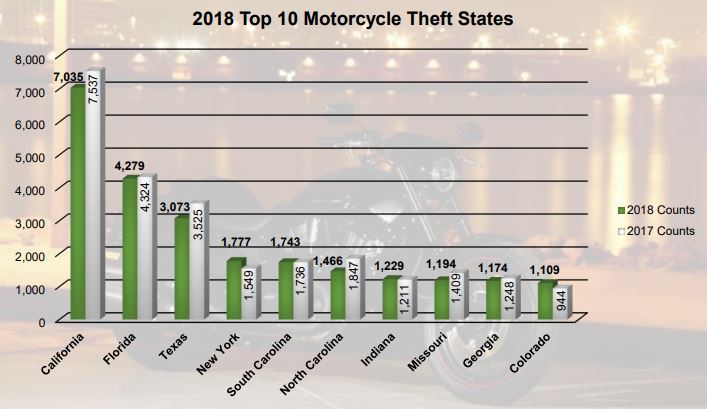 The cities that had the highest theft rate are, as you might expect, larger urban areas.  New York City had the most, followed by Los Angeles, Miami, Las Vegas and, San Diego.  Once again, the NICB only provided the total number of thefts so we can’t tell what the theft rate is.  New York City with the most thefts saw thefts increase by 34%.  But the next highest theft city, Los Angeles, actually saw thefts decrease by 25%. 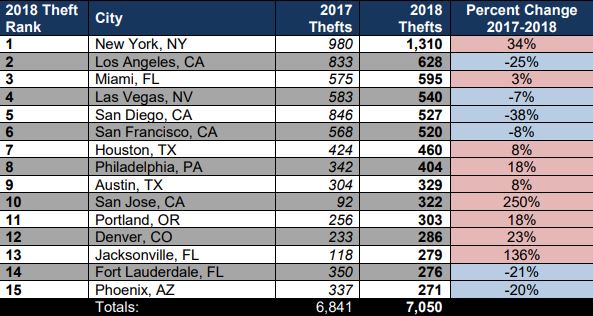 If you are wondering what types of bikes were stolen most, the NICB identified the most stolen bikes by their make.  Unfortunately, they didn’t break out their stats by model.  The most stolen make of motorcycle was Honda, followed by Yamaha, Suzuki, Kawasaki, and Harley-Davidson. 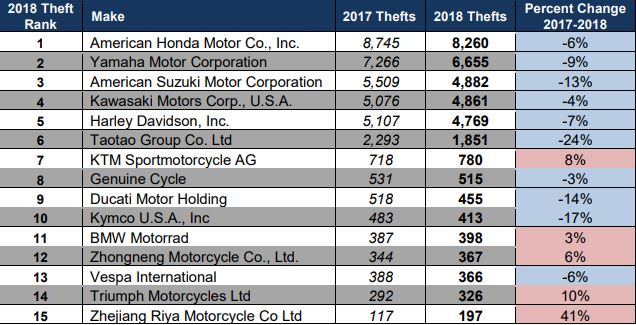 Motorcycle theft by their make.

Recovery of stolen motorcycles was down in 2018.  The NICB used an 18-month window from January 1, 2018, to June 13, 2019, and determined that 44% of stolen motorcycles had been recovered during that period.  California had the most recoveries of all, followed by Florida, Texas South Carolina, and Colorado.

So while the NICB’s stats may not have the detail that we might like, the takeaway is that thefts are down and that is good news.

Yamaha Working On Another Leaning Trike