You’re a young guy and of course, you want to impress the women.  So you go to all the best parties and you throw a few yourself.  You think that women will be highly impressed, especially your current girlfriend.

But it just so happens one day that your girlfriend tells you she’s not all that impressed with you.  In fact, she teases you that you don’t have a motorcycle.

That’s what happened to a New Dehli man named Lalit.  His girlfriend’s words really hurt and he had to do something about them.  How could he impress her without a motorcycle?  It didn’t take long for him to hatch a plan and shortly thereafter he and a friend put the plan into motion.

Lalit decided that he would get not just one moto, but several motos.  That would prove his worth to his girlfriend.  Wanting to get into his girlfriend’s good graces, it didn’t take long for Lalit and his friend Shaheed to commence stealing motorcycles and scooters. 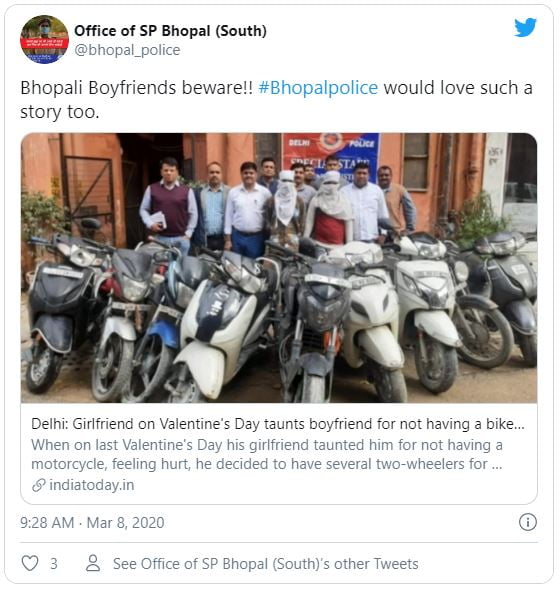 In the beginning, everything went smoothly and the duo was able to steal bikes.  Later, police received a tip that the two potential thieves were in the area.  The Bhopal police set up “filters” at key points and spotted the pair riding a motorcycle without a license plate.  Once stopped, Police were able to determine that the bike had been reported stolen.  They had their thieves.

During questioning, Lalit and Shaheed confessed to stealing the bike they were riding.  They also confessed that they had stolen eight other bikes.  Lalit told the police that all the thefts were done to impress his girlfriend after she teased him about not having his own bike.

For all his trouble, it doesn’t seem that Lalit was able to impress his girlfriend.  His ultimate reward became a jail cell and no girlfriend.