This article was kindly contributed by Janelle Kaz who originally published the article here.

If you don’t like the climate or landscape while riding in Colombia, just keep riding. It is bound to change drastically, and very quickly.

As the nation with the most geographical diversity on the planet, Colombia has an astounding 314 types of ecosystems, including Amazon rainforests, dry forests, high alpine Andean ecosystems called el páramo, tropical coastlines, and arid deserts. In the north, you can stand with your feet in the Caribbean and gaze upon snowcapped mountains, the Sierra Nevada de Santa Marta, within them the highest mountain closest to the sea in the world, a pyramid of granite and quartz, containing all the ecosystems within itself.

Of the nearly 10,000 kilometers of roads I traveled in Colombia, those of the Sierra Nevada de Santa Marta were the most gnarly. Depending on the season, it can be a full on mud slog. I highly recommend it, though I would have stashed some of my luggage in Santa Marta had I known what was coming. 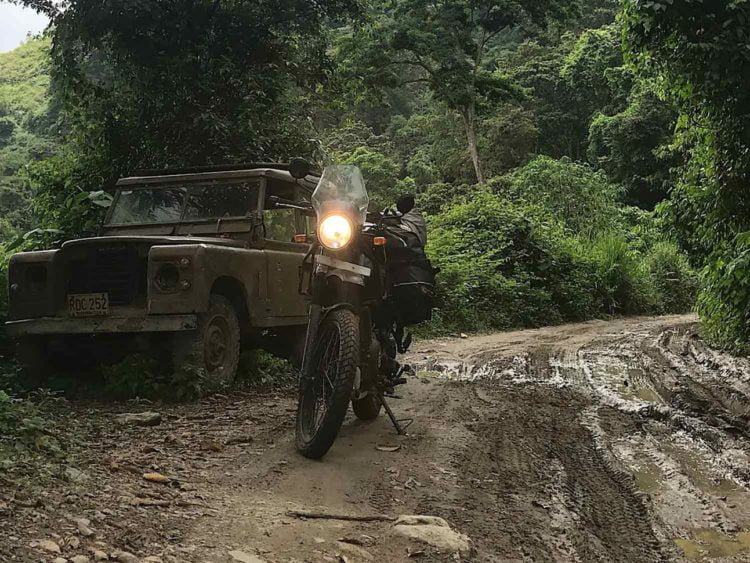 These rugged mountains are home to four tribes, descendants of the Tairona civilization, a people never fully conquered by the Spanish. They believe they exist to protect the Earth, that our planet is a living being, and humanity its children. As caretakers, to keep the natural order in balance, they make payments of cotton from the high mountains, imbued with their thoughts of gratitude for services rendered from the earth. 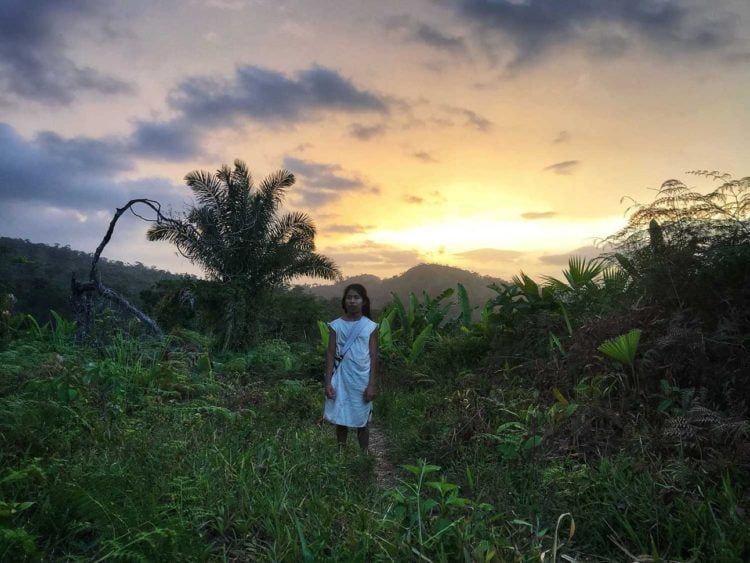 Camilo, a young Kogi boy who is our liaison, translator, and guide of Kogi language, landscape, and culture. -Janelle Kaz

Their spiritual leaders, the Mamos, are somewhat like shamans; they are “divinely chosen,” but raised separate from the others, in darkness. For years they live in dug-out huts or caves, only coming out at night. They develop an ability to listen to the Earth, to know deeply the celestial bodies, to read messages from observing the movement of water. They have felt the changes of the Great Mother and say that the destruction, exploitation, and extraction of resources will lead to our own demise.

The Kogi, one of the four tribes, reject our “progress and modern comforts,” and are not welcoming to outsiders. I was therefore extremely fortunate to be allowed into their territory, to spend time navigating their lands, the Sierra Nevada de Santa Marta. 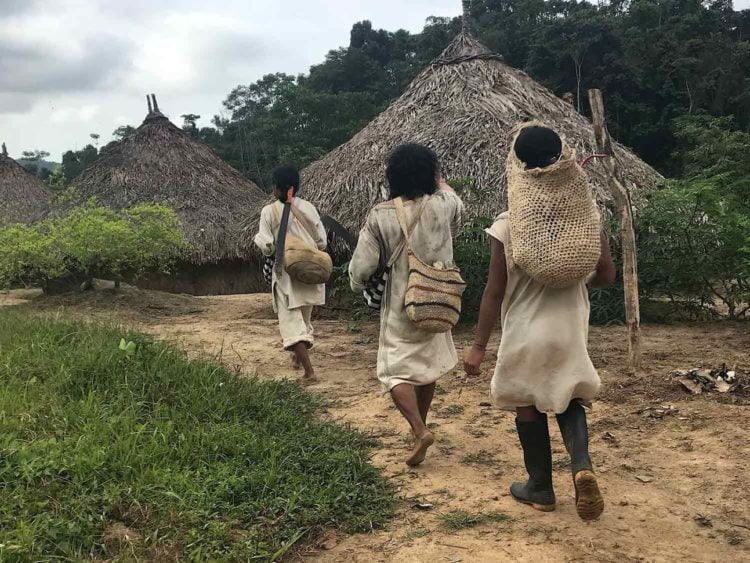 With the Nativa Foundation, our objective was to set up camera traps to document the elusive tapir, an ancient mammal related to the rhinoceros and horse, and prime prey for the jaguar. We set up our camera near a small stream, where we found tracks of both animals. I removed my shoes and let the Kogi lead me through the mountains, bathing and drinking from their rivers, sleeping in their traditional huts. They have an easy strength about them, perhaps one that comes from living in such harmony with nature, traversing the rugged mountain slopes of the Sierras, and tending the land in a way that it continues to provide for generations to come. 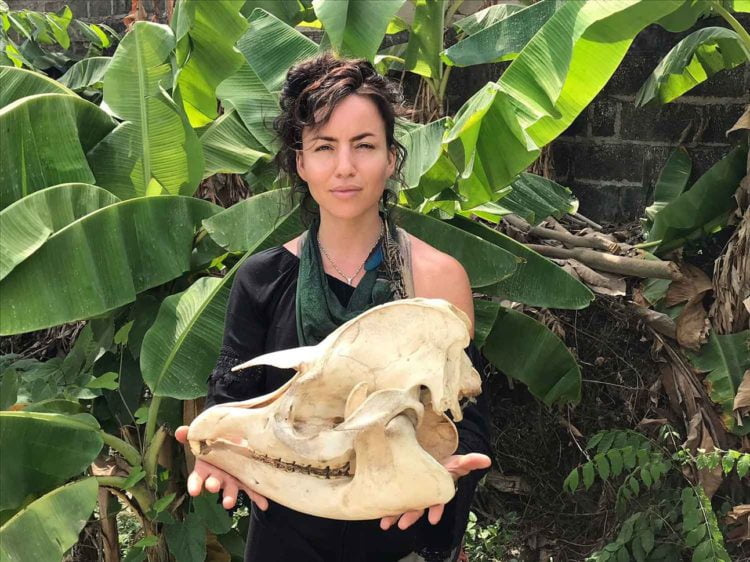 Author holding the skull of a tapir hunted in the Palomino river basin by the Arhuaco tribe. Since then, both the Arhuaco community and the Kogi have committed to not killing any more tapirs for 15 years. -Janelle Kaz

Like the Amazon, the Sierra Nevada de Santa Marta is a region celebrated for its biodiversity. It has been referred to as one of the world’s most irreplaceable nature reserves, with much of its wildlife found nowhere else on Earth. Recent discoveries, such as frogs that secrete antibiotics and a vaccine for yellow fever, are being documented as reason to extend the protective boundaries of the national parks and indigenous lands. 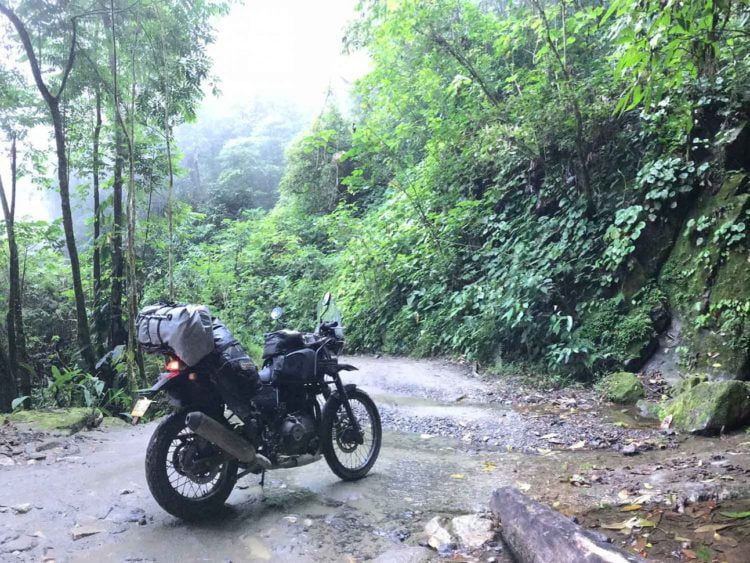 The work with Nativa was to help show that the borders of the Sierra Nevada National Park must be extended at least to the Palomino river basin. Significant biodiversity exists within this area, including what remains of the critically endangered population of tapir (Tapirus terrestris colombianus) and currently not protected. 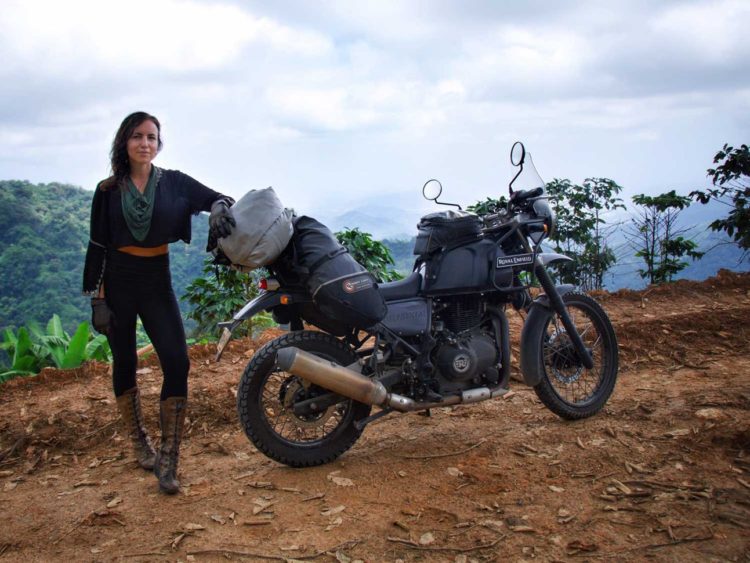 A Motogypsy and her fully packed Himalayan above La Victoria Coffee plantation on roads toward El Dorado. -Janelle Kaz

In order to safeguard the riches of one of Earth’s most biodiverse regions, it is clear that governments should continue recognizing and protecting the land rights of indigenous peoples, time-tested stewards of the forest. 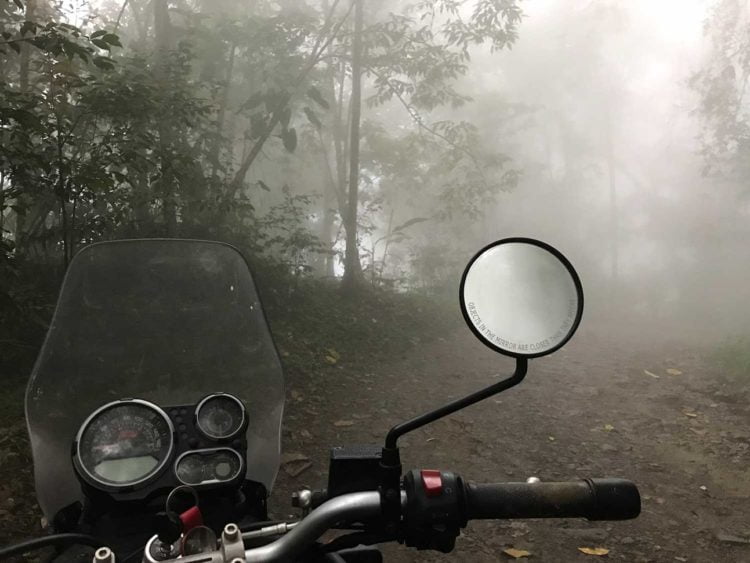 To further discover these mountains, a road of adventures will lead you from zero to 2,300 meters above sea level, reaching El Dorado. Legendary for its treasures beyond our wildest imagination, it is not gold that awaits but a multitude of precious gem-toned hummingbirds, enormous butterflies, and night monkeys with eyes that glitter. 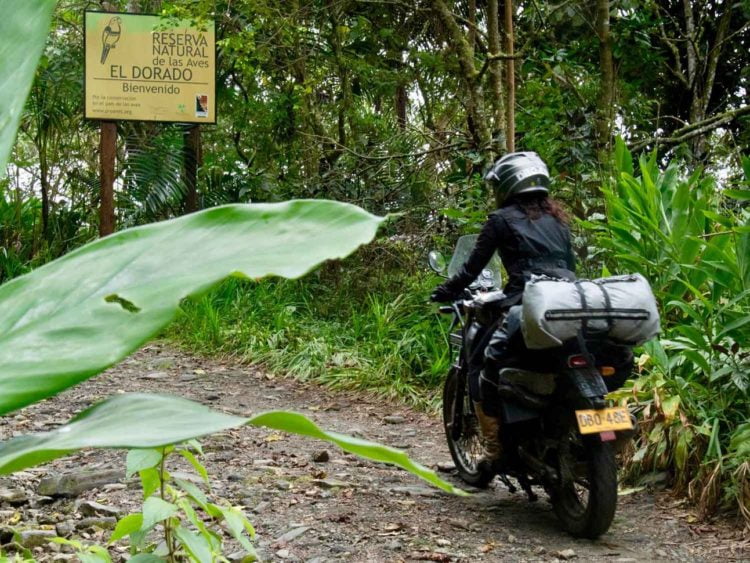 The entrance of the El Dorado Bird Reserve, covering nearly 2,000 acres, ranging in altitude from 900 to 2,600 meters and with a high number of endemic species of flora and fauna which are threatened with extinction. -Janelle Kaz

El Dorado is no longer only a legend thanks to the incredible conservation work done by ProAves to protect habitat for the tremendous biodiversity that exists in the Sierra Nevada de Santa Marta mountains. Among the flora and fauna of this forested reserve is a large number of endemic species which are threatened with extinction. Truly a birding paradise, the inventory of what you can see sits at up to 374 species of birds, some of which cannot be found anywhere else on Earth. 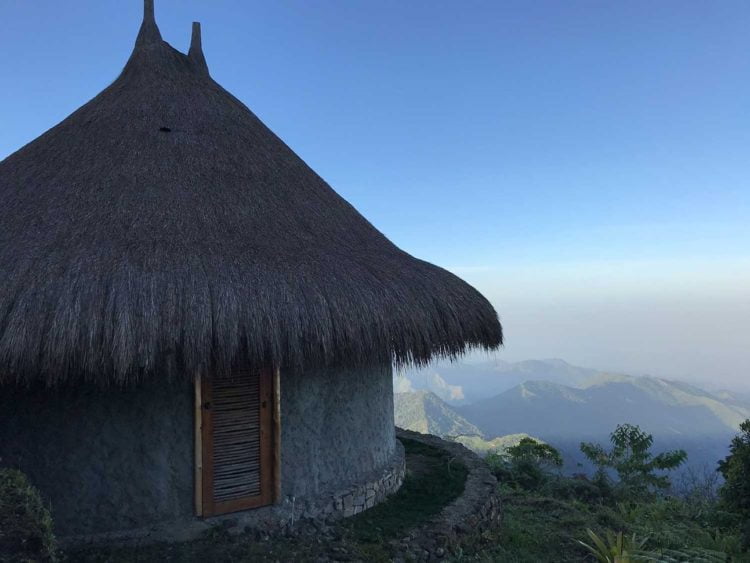 The Kogi-inspired habitats with views of the Sierras and the Caribbean Sea. -Janelle Kaz

Colombia has more species of birds than any other country. In the US, we have less than a dozen species of hummingbird in the middle of the summer, with only a few sticking around through the winter. In Colombia, 147 known species of hummingbirds kiss the flowers. You can see a feisty show of dominance among these flying jewels on the large deck of El Dorado’s comfortable lodge, with a backdrop of Santa Marta and the Caribbean Sea. 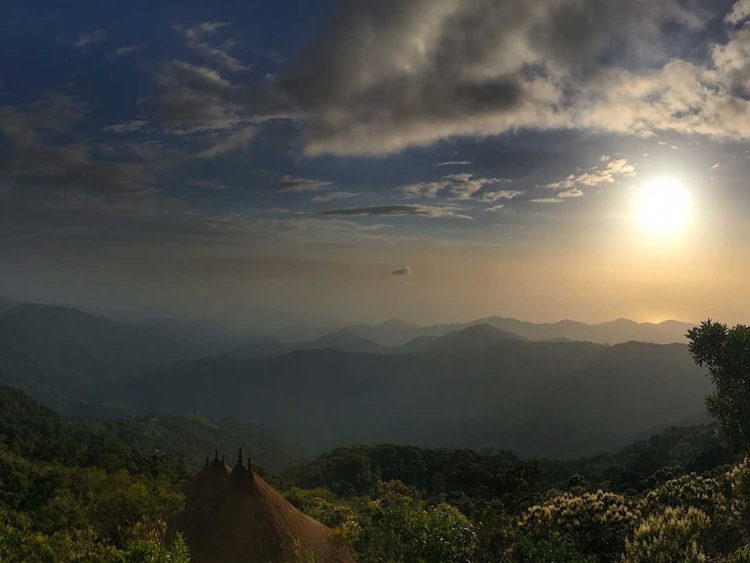 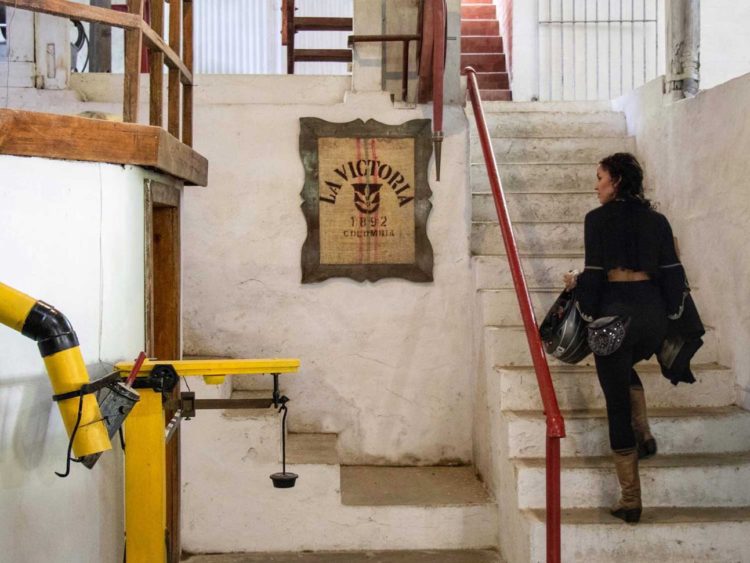 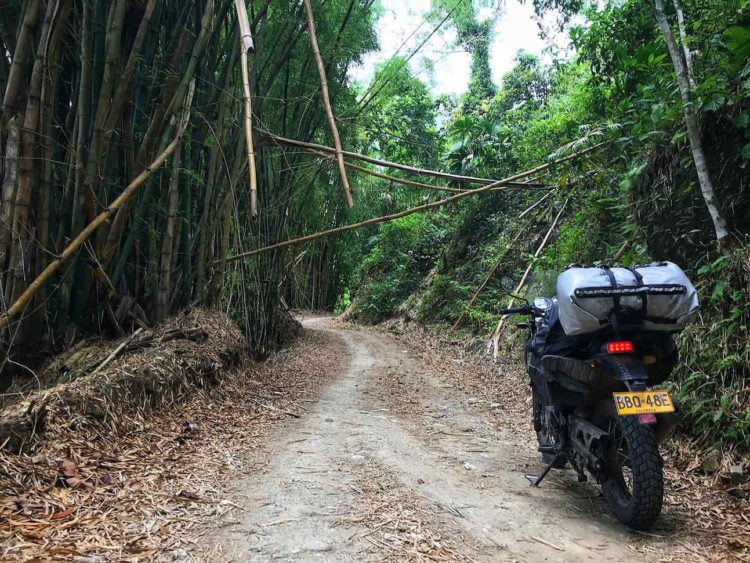 The mountain roads to reach this bird reserve are advanced and lead to incredible views. Beyond Minca, one way takes you through the main coffee processing building of La Victoria, with the road continuing straight through its warehouse to a bamboo-lined dirt corridor. You will eventually reach a small shop that houses a pool table with a stunning view. Further up you’ll find El Dorado and, past that, the top—Cerro Kennedy, at 3,100 meters above sea level. 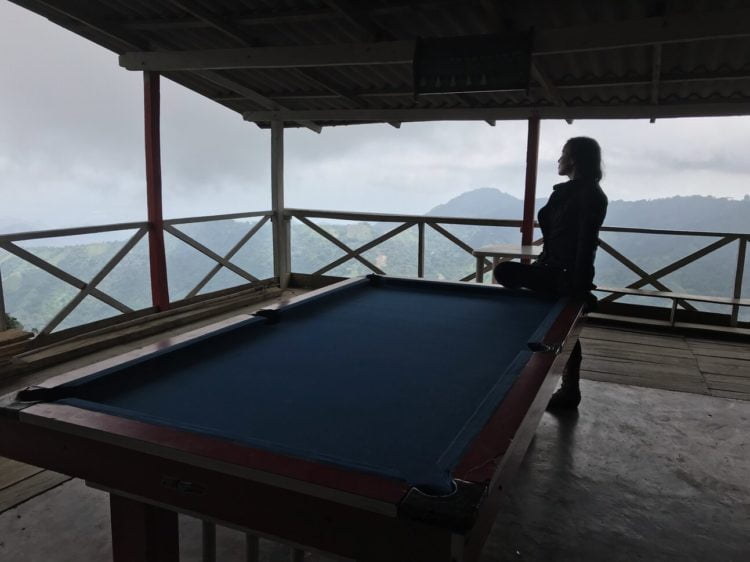 Snooker with a view. -Janelle Kaz 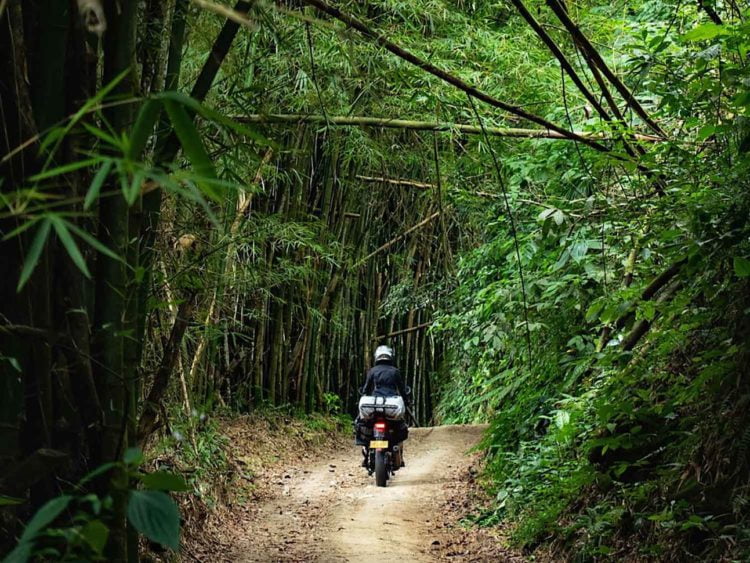 Bamboo tunnels beyond Minca, known as the heart of the world. -Janelle Kaz 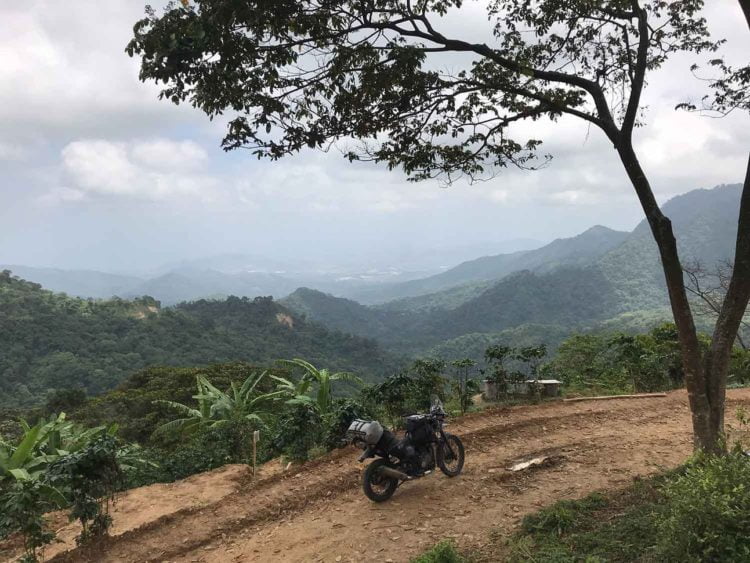 Bananas, coffee, and dirt—necessary ingredients for a mountain motorcycle ride in the north of Colombia. -Janelle Kaz

Enjoy the views; you’ve earned it.