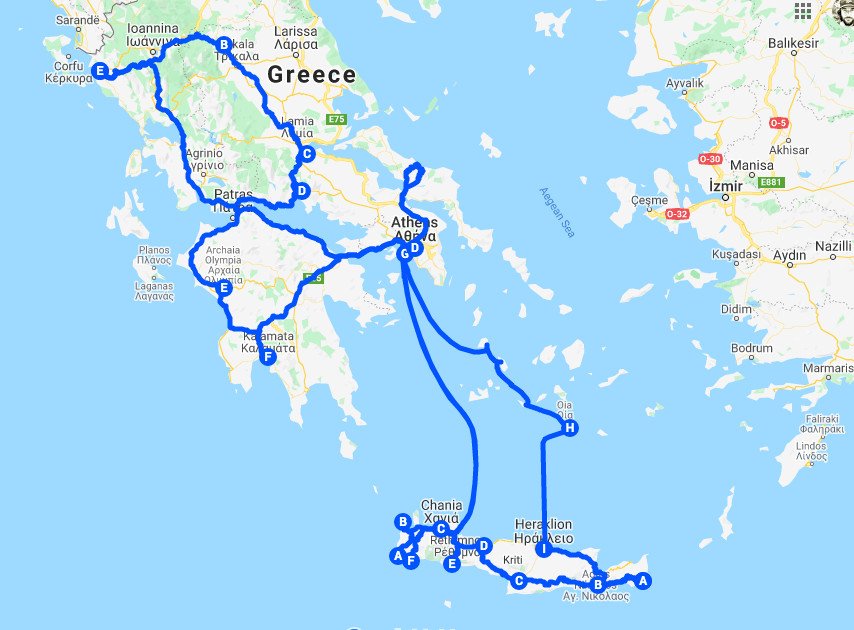 My ride through Greece

Greece is one of those countries that has it all. History, great food, amazing coastlines, beautiful beaches, snowy mountains, and an outstanding motorcycling community.

Everybody knows this country for its ancient history. Aristotle, Plato and all the other illustrious inhabitants of those lands thousands of years ago allowed Greece to be known all over the world.

What is less known about the country is that for centuries it has been the bridge between the Eastern and Western worlds, sometimes not without conflicts. Hence the unfortunate economic situation in which its inhabitants have been finding themselves for the past decades.

Regardless of its economic struggle, the Greek economy managed to survive, mostly with tourism and produce exports. 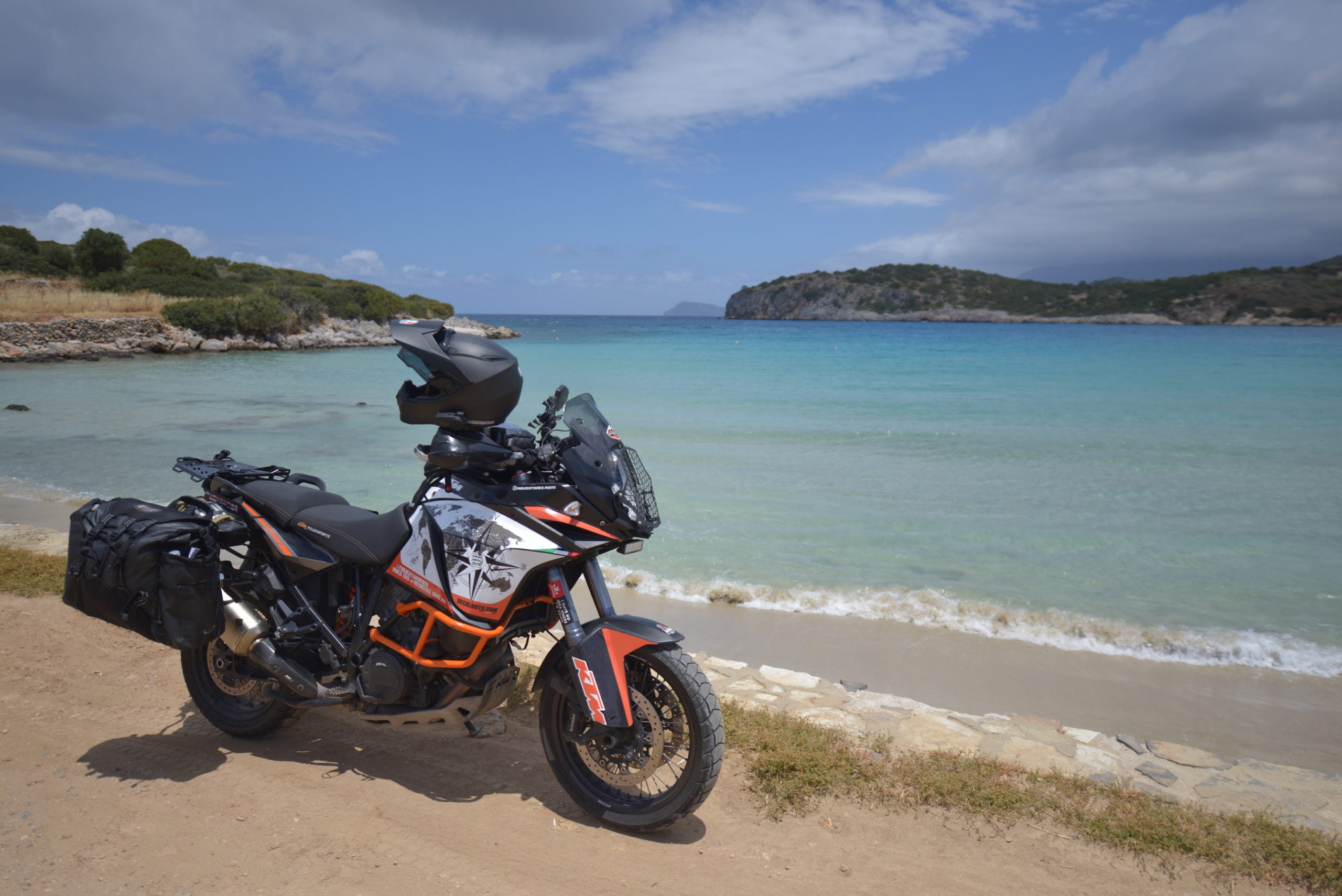 Greeks are, for this reason, generally very welcoming towards tourists. Food and family are two of the main pillars on which Greek society is based. It’s common to find yourself invited to some random private dinner party or being greeted with some delicious homemade food by neighbors.

Most of Greece is full of small and old villages, where locals don’t speak any English at all; a common sight is to see a bunch of old men gathered outside of the local bar, sipping cold coffee or even Raki, one of the local spirits.

Geographically, the country is split in 3: the north, sharing borders and culture with the Balkans and the Turks, the center and the south, which comprise the Peloponnese and all the Aegean islands.

Technically there’s an extra part of Greece, which is geographically separated and quite unique within itself for customs and history: Crete. The island of Crete in fact was an autonomous country, included into the Greek territory only 100 years ago.

Greece is certainly one of the most incredible countries for riding I’ve been in my life. One of its highlights is the town of Meteora. Located in the north part of the country, it used to be a sacred land and subsequently a religious site for Eastern Orthodox monks. 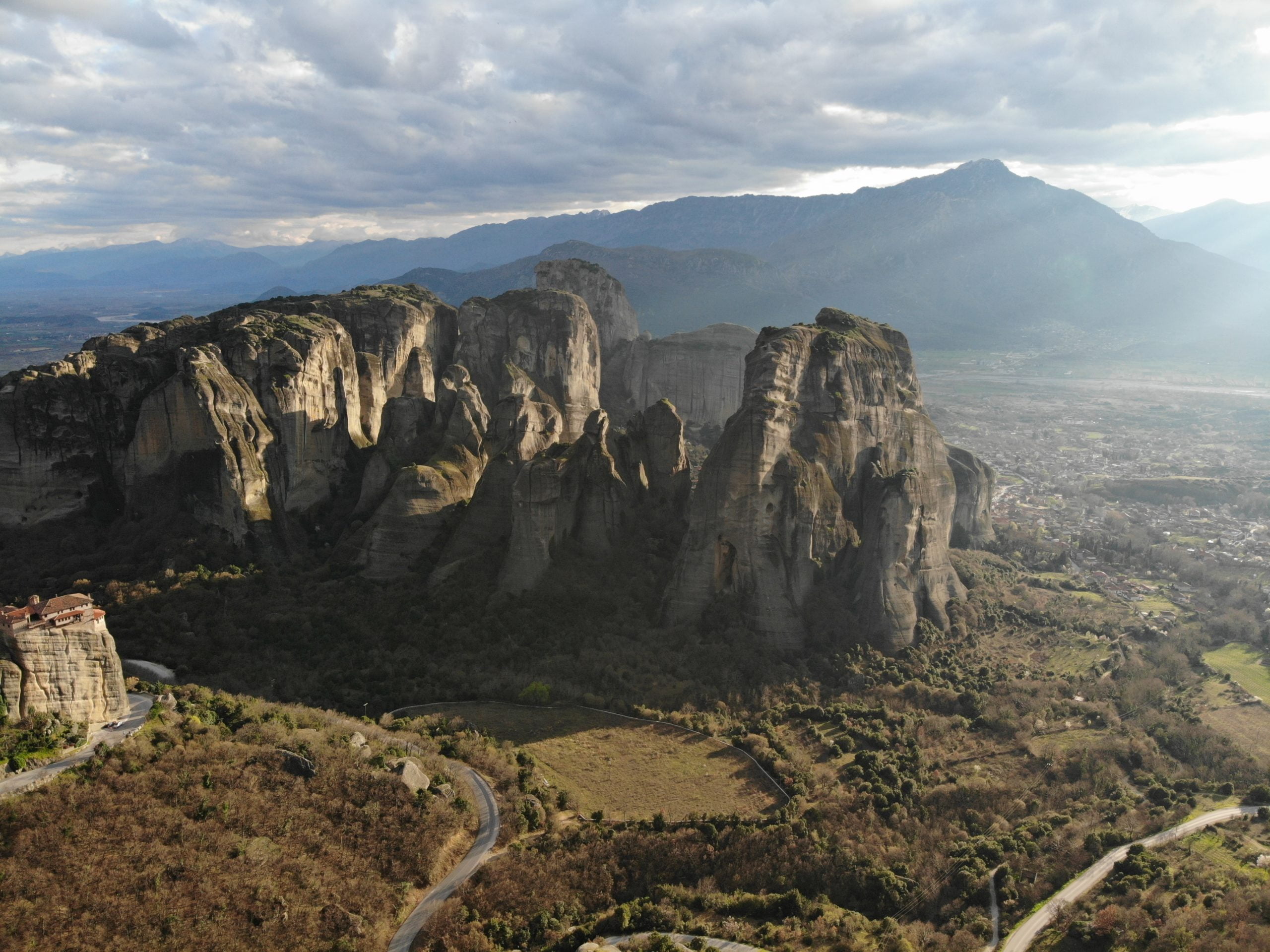 The unique rock formations that stand in the middle of this valley are a true eye pleaser. Ancient mythology said that Zeus, the god of gods, created those unique mountains, striking thunders from the sky. A more scientific and plausible approach confirmed that the area used to be a lake instead and, after millions of years of erosion, this unique landscape appeared. 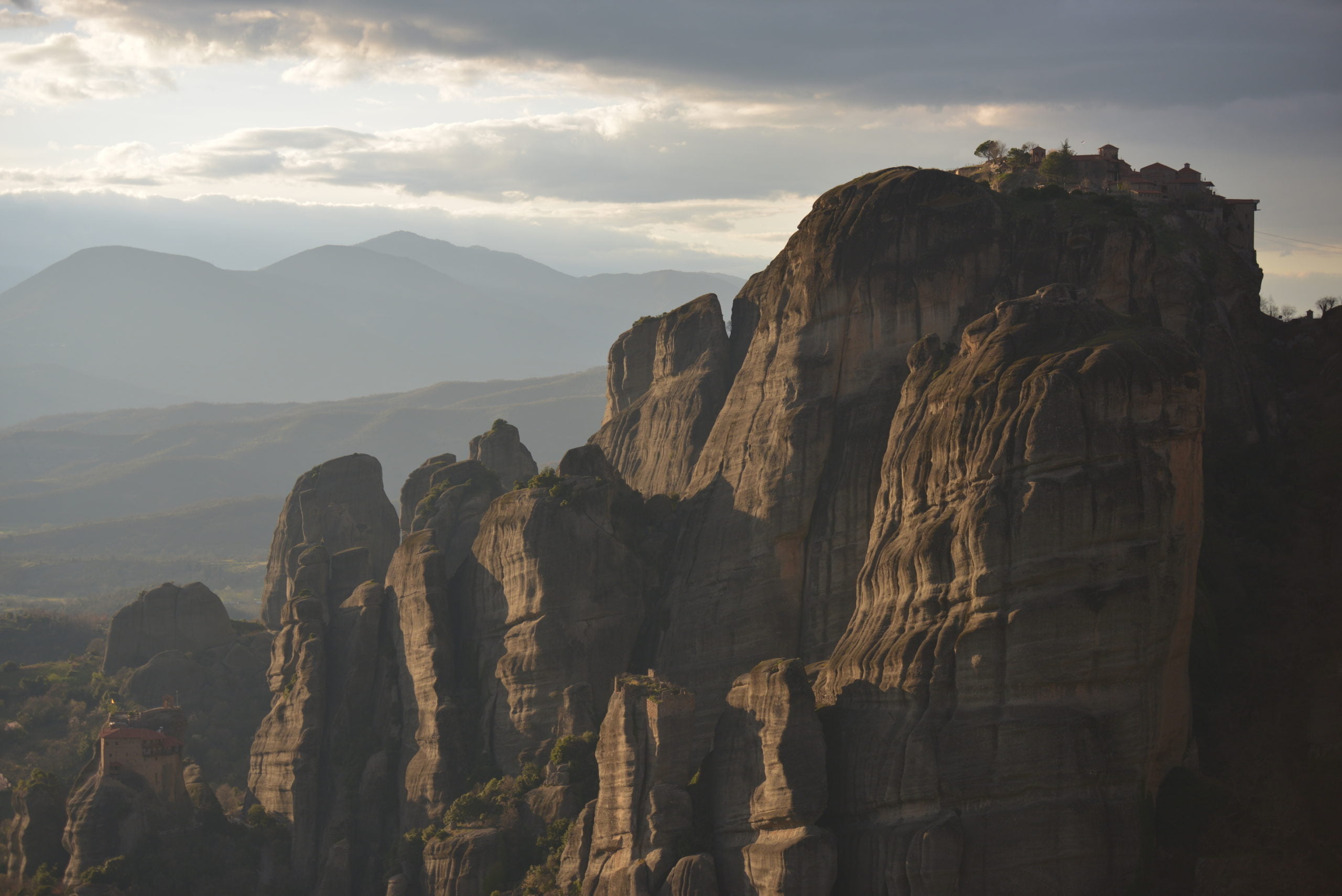 Waiting for the sun to set behind the nearby mountains, listening to the wind blowing, on top of one of these peaks overlooking the monasteries, was a mind-blowing experience.

The north and central part of Greece is rich in tall mountains; this gives unprecedented opportunities for motorcycle riding. One of the great sites to visit is certainly Thermopolis, where the famous battle between the Spartans and the Persians happened. Hollywood took care of narrating this memorable moment in Greek history with the movie 300.
The history behind that battle was slightly different from the movie itself, since the Spartans weren’t really 300; the number was more likely around 4,000, but the battle took place in the exact place described.

The nearby mountain passage was used as a funnel to concentrate the Spartans’ striking force against the Persian invaders. All this area is actually rideable and visible from the nearby roads, with a great view of the surroundings.

Approaching the south area of the country from here, we can find two of the most iconic sites in Greece: Delphi and ancient Olympia. The first one is a sacred valley, overlooking the ocean, home of one of the most important archeological sites of the country. The famous local oracle, Phytia, was often consulted for the most crucial decisions of its time; Greeks considered Delphi the center of the world, during the classical Greek era. 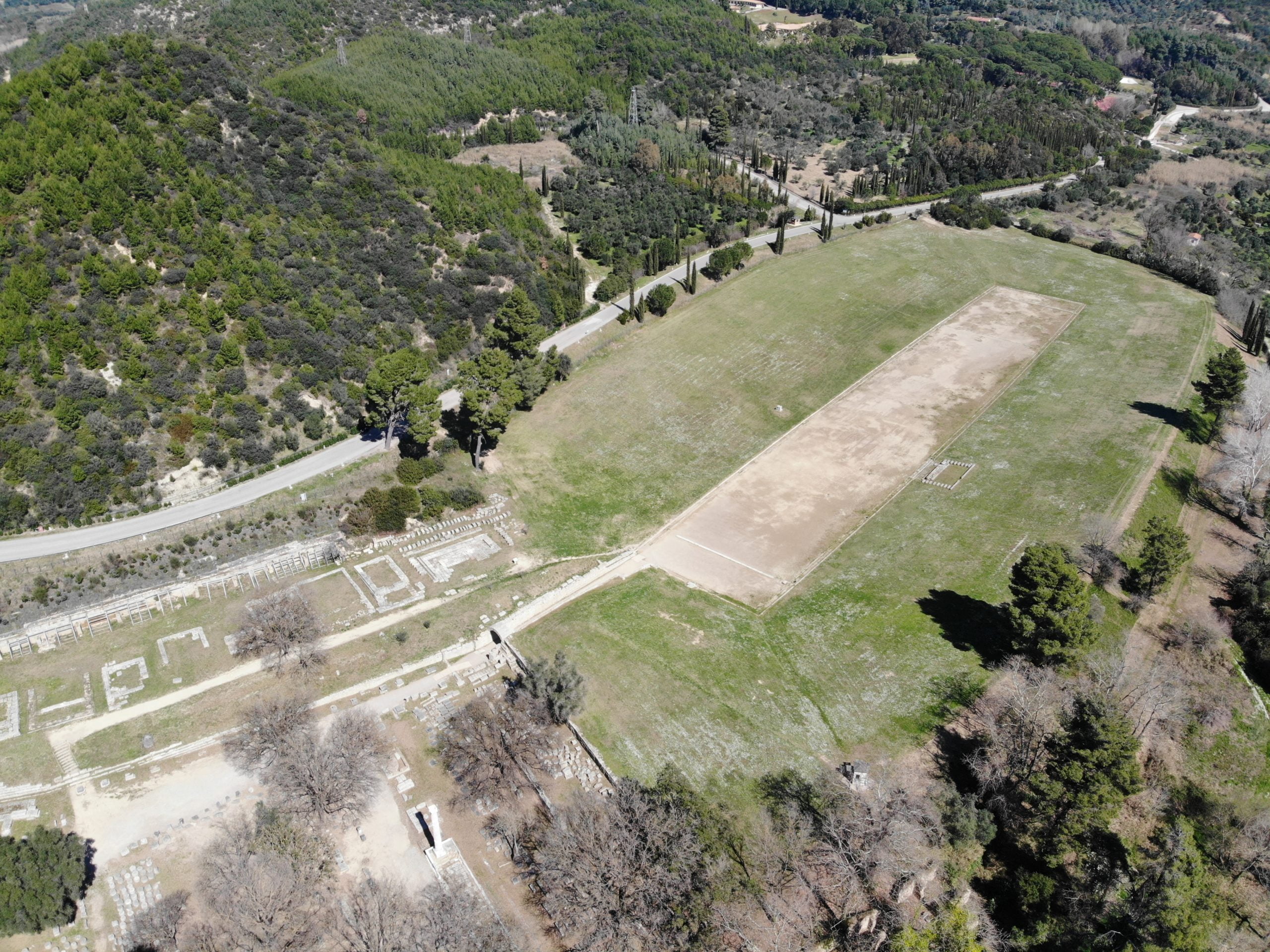 Ancient Olympia needs no presentation; this is the place where the first Olympic games were held, in 776 BC.
It’s easy to take a glance at the site and get taken away by the imagination, thinking of ancient warriors and athletes competing in front of the crowds.

Riding south from there, we can’t help but notice the impressive amounts of olive trees in cultivation. The whole Peloponnese area is one gigantic olive garden. Riding in spring, all olive fields are surrounded by immense “forests” of yellow flowers. This area is home to the delicious Kalamata olives, exported all over the world, carrying the name of the region’s capital city. 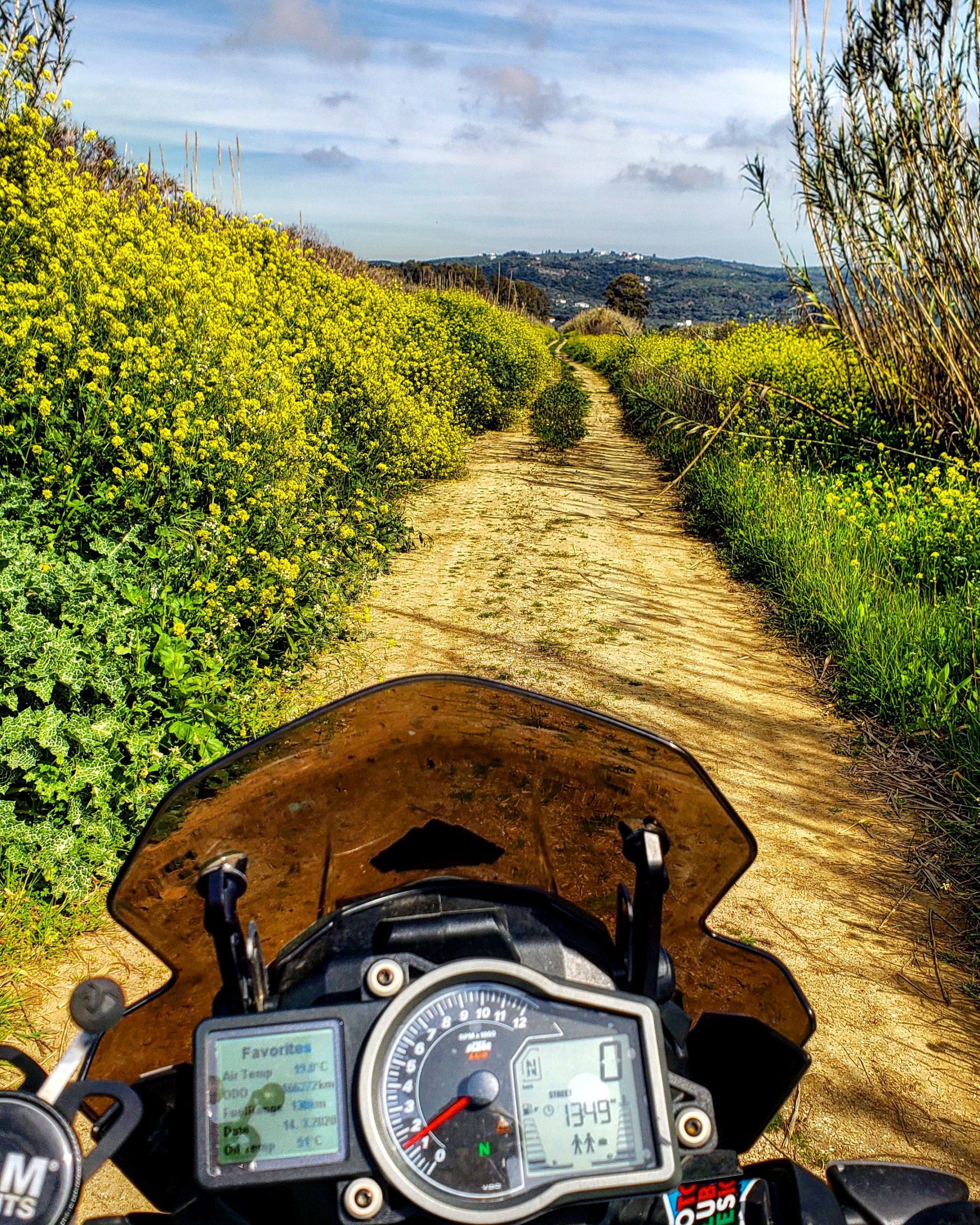 The coastline is full of towns with old Venetian forts and castles, remains of the late Venetian Republic colonization. It’s quite an experience to spend the day riding from 3,000-year-old Greek ruins to 500-year-old fortresses overlooking the sea.

The world nowadays knows Greece mostly for its islands and beautiful sea. One island above all caught the spotlight along the years: Santorini. This incredible location has been immortalized thousands of times for its uniqueness. 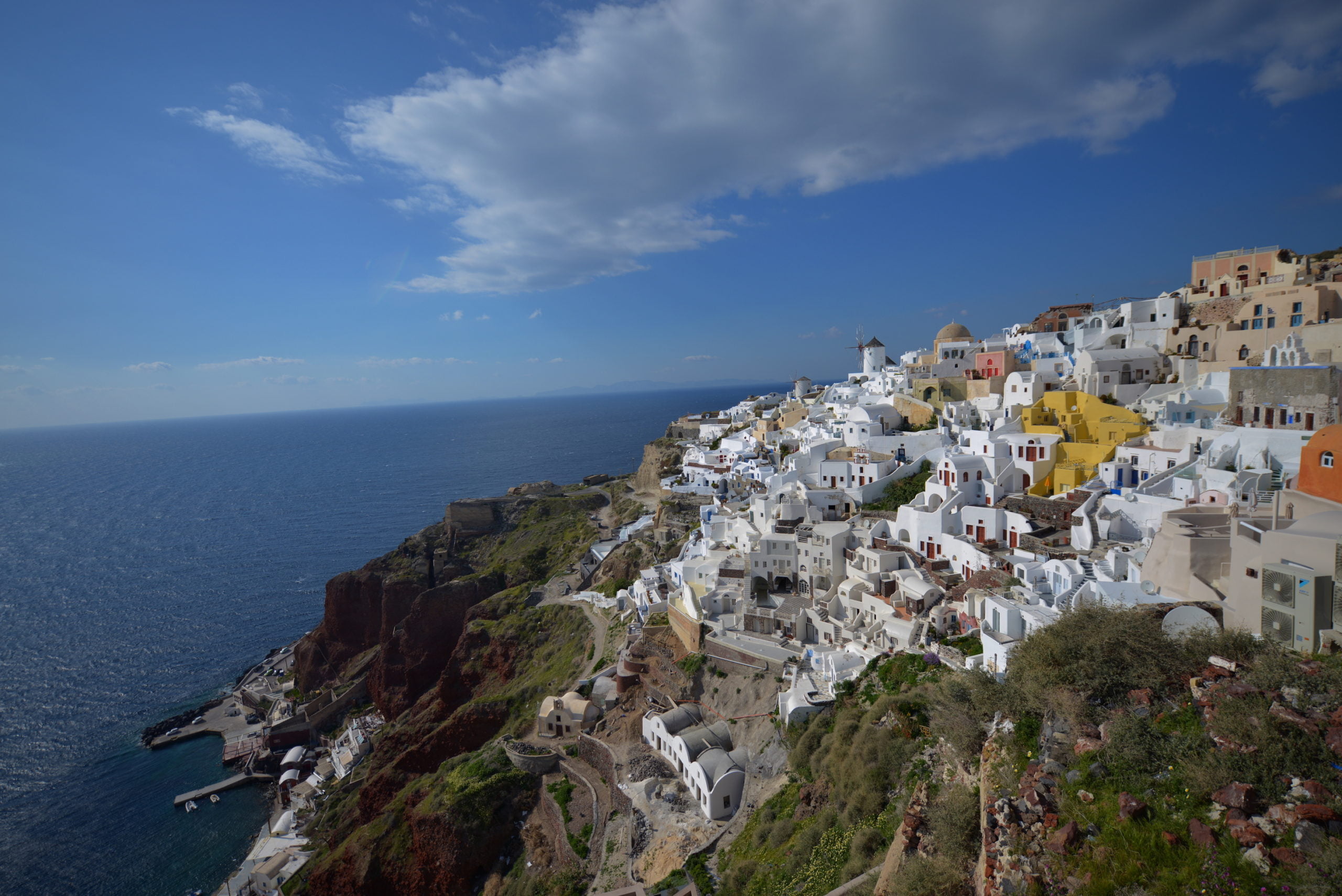 The small island sits in front of an active sunken volcano, which for the past 3,000 years has been serving us incredible photo opportunities. Because of its popularity, Santorini often gets flocked by mass tourism, cruise ships and honeymooners. I travelled to the island during the recent lockdown. 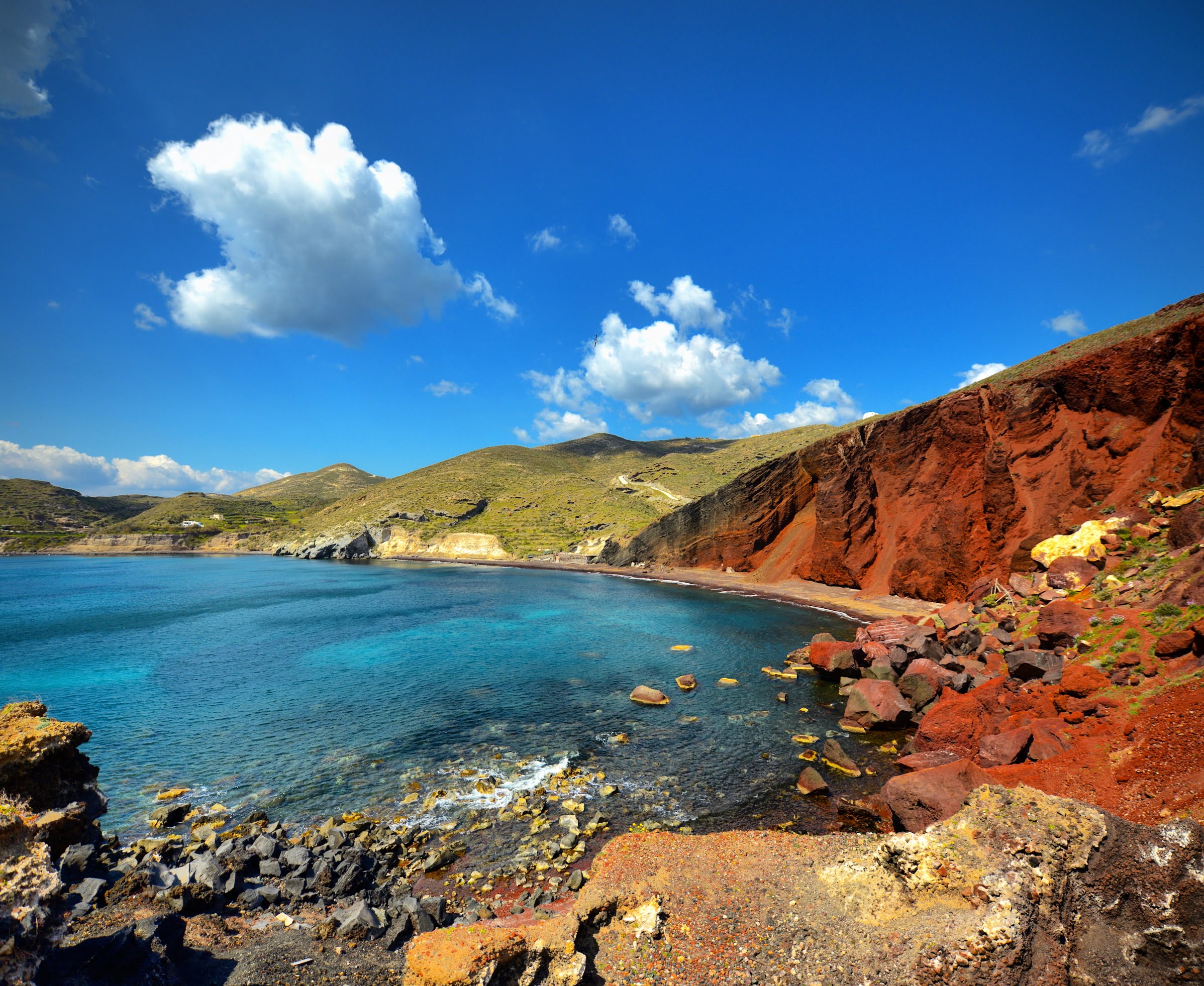 In this sense, the pandemic was an ideal time to explore these extremely touristy places. Travelling within the island was still allowed so I ended up exploring Santorini in probably the quietest time of the past 30 years. 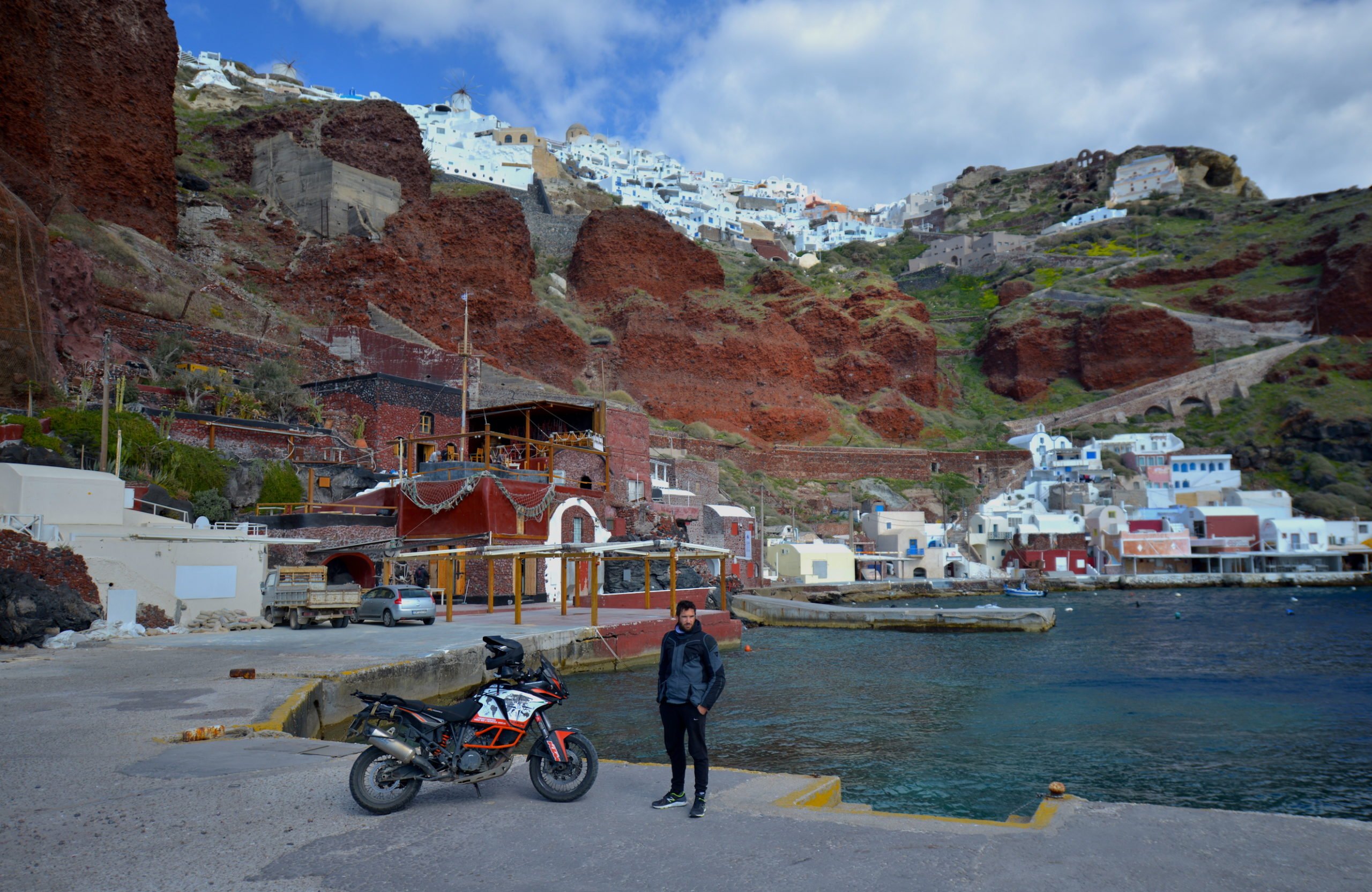 All shops and restaurants were closed and the only people on the island were the few locals and construction workers; this allowed me to ride through places where people usually weren’t supposed to (Riding through the tiny roads in Thira) and to enjoy the sunset over the caldera with nobody around. 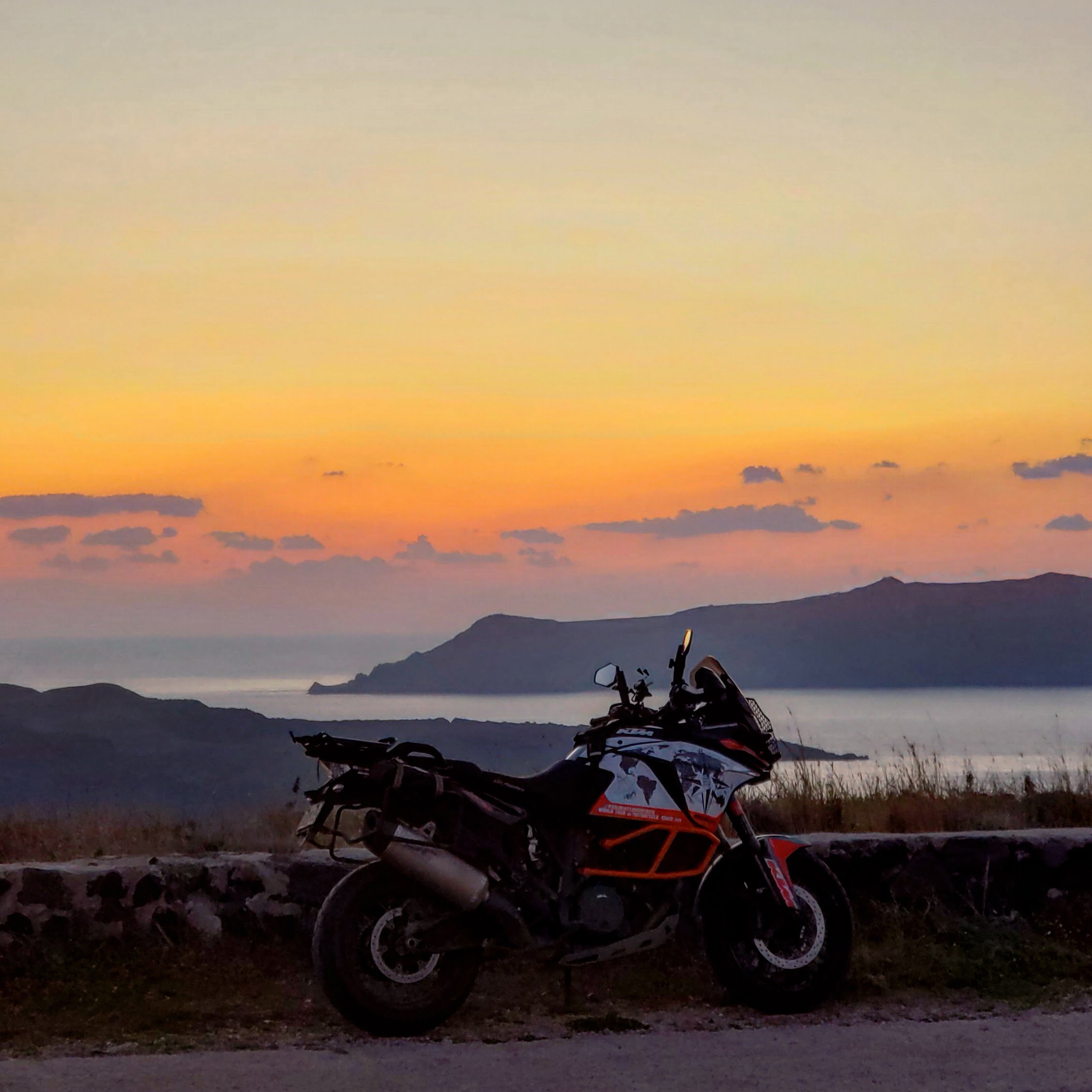 From Santorini I took a ferry south to Crete, the biggest and southernmost island in Greece. Crete was an ideal destination for motorcycling, since it allowed me to enjoy mostly day trips, without the stress of carrying all my belongings on my motorcycle. The island is quite long (almost 300 miles) but very narrow (50 miles) with a massive mountain range in the middle; there are 3 major peaks, which usually have snow on their tops, during most of the year.

This creates unbelievable photo opportunities and countless riding combinations through the island. I am confident to say that Crete really has it all: mountains, lakes, waterfalls, gorges, islands, beaches and amazing roads. 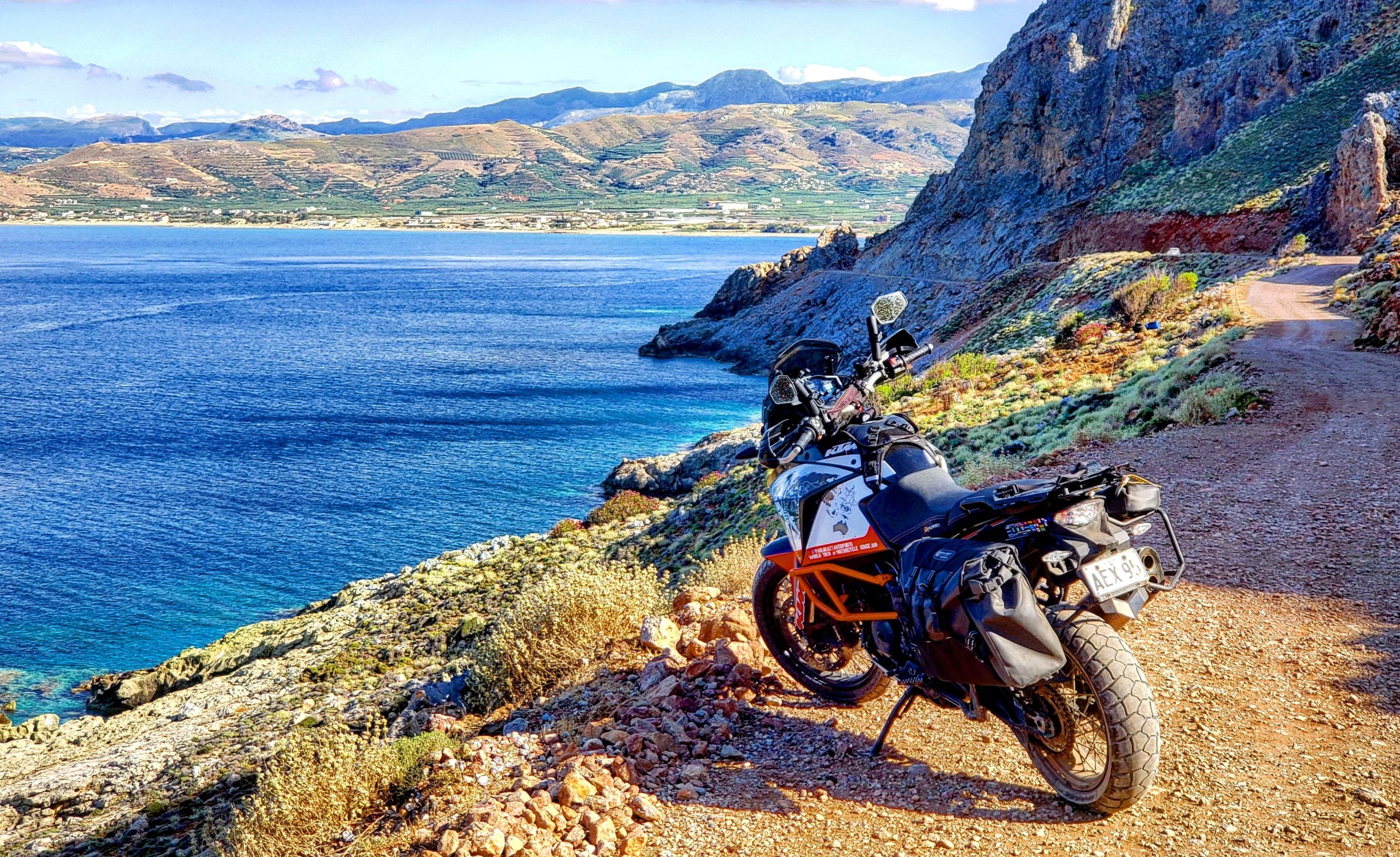 Foodwise, Crete is a paradise; the abundance of local tradition (the ancient civilization of Minoans dates back to 2,700 BC), fused with African, Turkish and Italian culture, created a blend of culinary flavours that is unique. Crete is also big enough to be self sufficient and autonomous in terms of local produce; the south coast facing Libya offers warm temperatures all year long. The mountains and the plateaus right beneath them, create the perfect environment for farming, growing olive trees and harvesting wine. 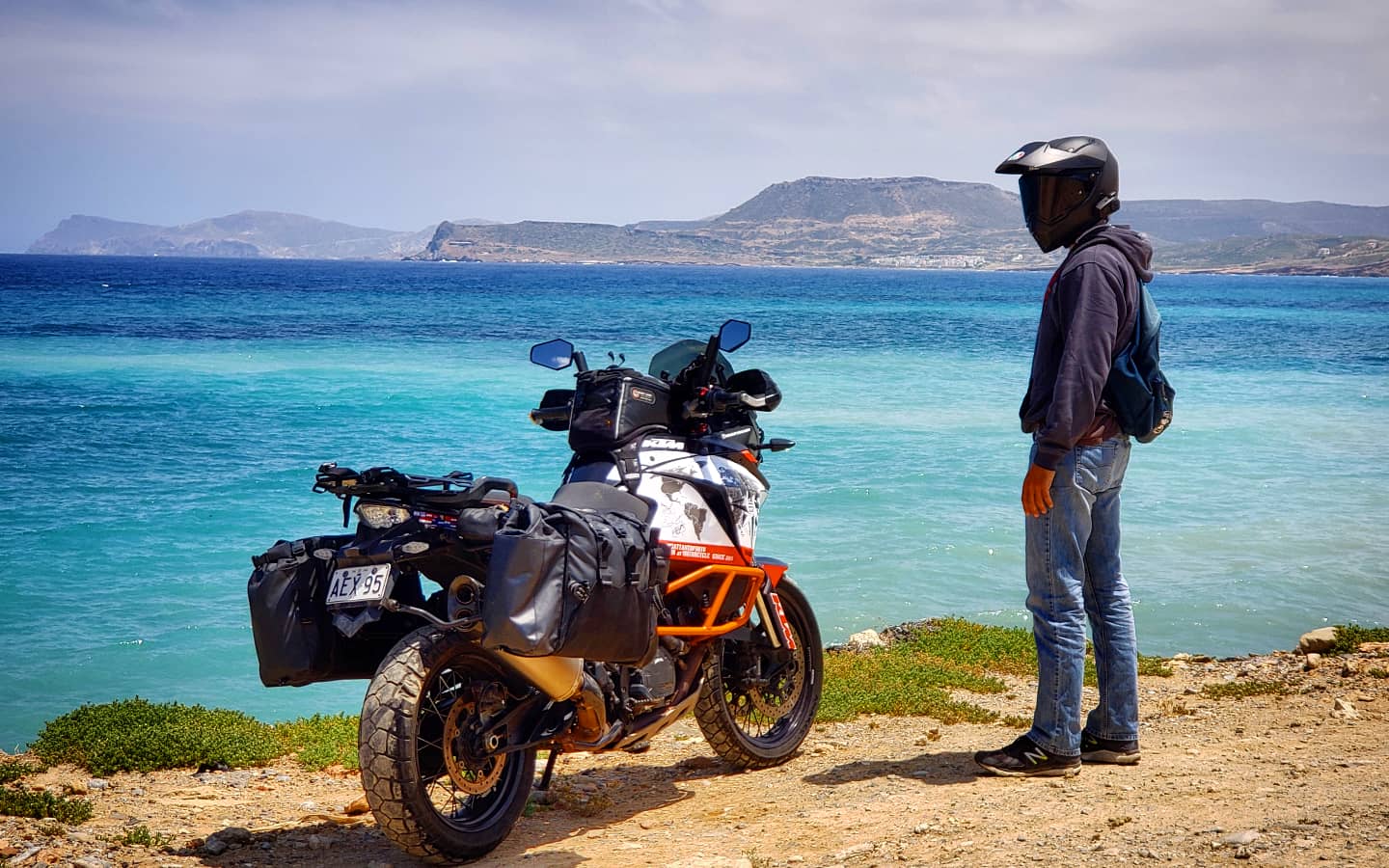 The best feeling is to ride from one side to the other of the island; starting from the European side, one could ride the twisty roads across the mountains, get on a dusty off-road track and end up on the African facing beaches, with its enchanted and pristine waters. The best way to end the day is in a traditional taverna. Portions are usually for two people and prices are usually really affordable. 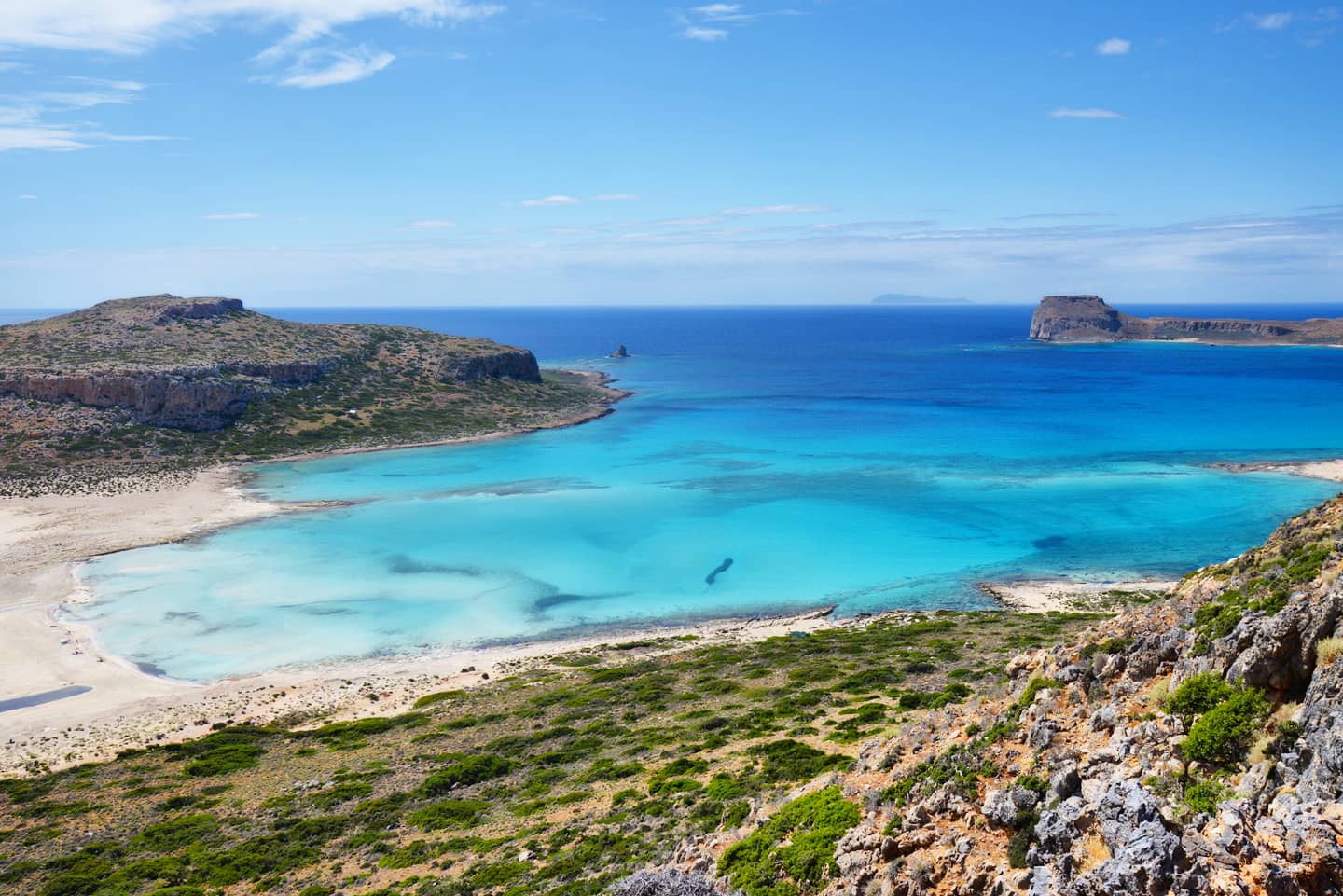 Greek hospitality is second to none and because their economy mostly relies on tourism, it is almost certain that you will be treated as a welcome guest wherever you go.

If you like beaches, mountain roads and great food, Greece is certainly the country for you. All at probably the lowest prices you can find in Europe.

Basic Bike Upgrades: What Would You Change?