Motorcyclists are under attack.  Again.  The Oxfordshire County Council recently released a paper outlining the county’s transport and connectivity vision through the year 2050.  The Council represents over 600,000 people.

To start the conversation, here are two startling tidbits from their paper:

The document entitled “Local Transport and Connectivity Plan” provides 28 different papers addressing the topic.  One of those papers is called “Connectivity: Motorcycles”.  In it, the use of motorcycles is slammed.

In its opening paragraph the Oxfordshire City Council says motorcycles:

[They] suffer from a reputation for being dangerous, some of which is born out in the data, which shows motorbikes as having the highest number of fatalities per million miles travelled compared to any other mode.

Well, that’s interesting.   The Council is drawing its conclusion that motorcycles are dangerous based upon inadequate data?  By their own admission, the county’s report says, “…some of which is born out in data…”.  So what they are really saying is that they don’t have enough supporting data to draw an informed opinion.

Hmm…  So uninformed “reputations” are a basis for the Council’s transportation plan.  That’s not so reassuring.  How about having the Council review and analyze complete data before drawing its conclusions?

Might it be smart to investigate why they have more fatalities?   Cherry-picking from inflammatory statistics to draw conclusions is reprehensible and indefensible.  This is especially true when trying to convince the public that motorcycles shouldn’t be a part of the transportation framework in the future. 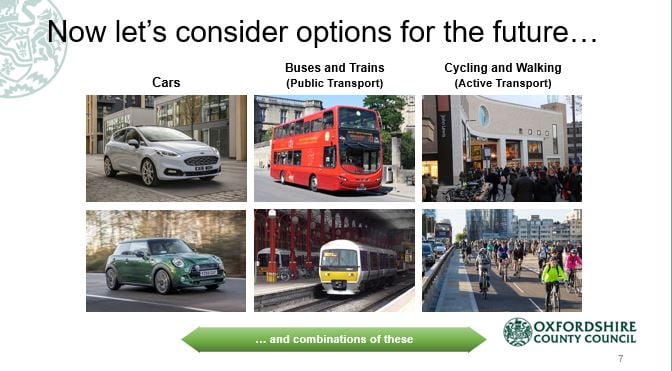 Unfortunately, motorcycles are not to be found anywhere in Oxfordshire’s plans.

Then, the paper examines the “arguments” for and against the use of motorcycles as transport.  Below is their “word for word” argument.

These “arguments” are so filled with cherry-picked, exaggerated and, inflammatory statements that it’s difficult to take them seriously.  So let’s take a look at the Council’s Pros and Cons.  Right off the bat, the Council’s assessment has more Against than For.  Is there a reason for that?

As much as the Council may want them to be, at this time, electric vehicles do not provide the same capabilities as an internal combustion engine vehicle and have not been widely adopted.

The next part states that motorcycles use less fuel than most cars.  That sounds pretty good.  But then the Council has to throw in, “although not all, cars”.  Why was that statement made?  Was it made just to vilify motorcycles?

Well, at least the Council admits that bikes take up less space on the highway than cars, reducing congestion and take up less parking space.  That sounds wonderful.

We all know, motorcycles take up less space when parked.  But for some reason, the Council fails to indicate how much space is saved.  If four bikes can fit in the area of one car, Isn’t that worthy of mention?  They represent one-quarter of the parking space that a car, ICE, or electric would occupy.  That’s a massive saving that the Council apparently refuses to address. 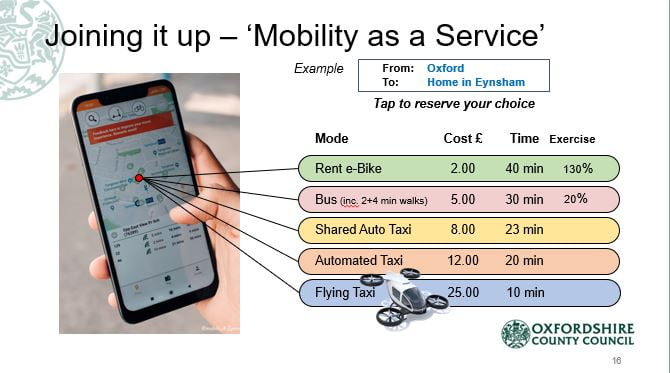 Nowhere are motorcycles mentioned for mobility. Interestingly, the Council is considering “flying taxis”.  However, they do not note how the flying taxis will be powered or regulated.

The fact that motorcycles are faster than bicycles is quite clear.  Motorcycles can also be faster than cars and busses in congested areas.  Why isn’t that mentioned?

A thirty-minute commute on a motorcycle that averages 30 miles per hour will deliver its rider to a destination 15 miles away.  The same commute on a bicycle averaging 10 miles an hour will only cover 5 miles meaning that the bicycle rider will need 1.5 hours to make the journey to their destination.  There’s no “perhaps.”

So that’s it for the “For” points, according to the Council.  And of course, there are more “Against” points in the Council’s paper.  Let’s look at them, as well.

Motorbikes are mostly still using fossil fuels to run, meaning they are environmentally unsound, not sustainable, and contribute to air pollution

Yes, it’s true.  Today’s motorcycles mostly use fossil fuels to run.  But the use of electric motorcycles continues to rise.  With time, there’s no reason to think that bikes will not make a similar conversion to electric power.  So the rest of the Council’s objection to motorcycles is moot.

Precisely what is the definition of “substantial”?  Somehow, the Council has conveniently forgotten that the other modes of transportation they espouse make noise as well.  Busses, trains, and cars (ICE and Electric), all have a noise footprint.    Without comparison, the Council’s premise is merely an unsupported statement.

Statistical evidence suggests motorcyclists are a danger to themselves, and there are recorded activities in other places showing drops in collisions once motorised two wheelers have been banned from specific lanes other than roads.

The Council’s statement that motorcyclists “are a danger to themselves” is staggering.  If this were true, the only motorcyclists injured or killed would be those that fell off for no other reason than being 100% at fault.

Dangers to motorcyclist safety includes their behavior.  But the dangers also include other vehicles, poorly maintained roads, and road hazards.   Motorcyclists aren’t a danger to “themselves” they incur danger from other road users and poor conditions that the Council is responsible for. 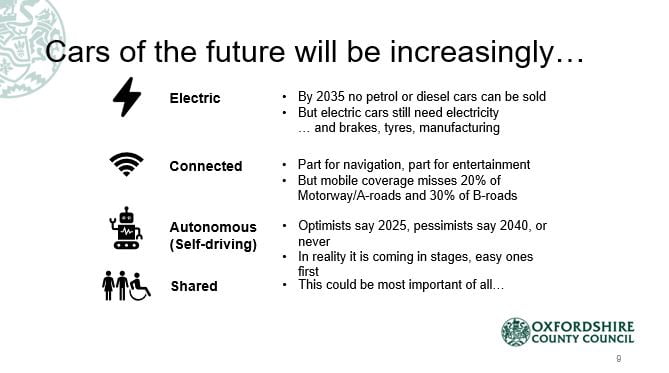 The Oxfordshire County Council thinks cars will be electric but don’t mention other types of power presently under development like hydrogen or LP, which may have less environmental impact than electricity.

Motorbikes are substantially larger than bicycles, so they take more land space to park in busy urban environments.

Yes, motorcycles are larger and take up more space than bicycles.  But they also take up far less space than the other forms of transportation that the Council approves.  Cars, busses, and trains also take up more space than bicycles.  This assertion is so clear that it seems like the Council just wanted to have another “Against” point so that there would be more “Against” than “For” points in its paper.

What this all boils down to is that motorcycles are not being carefully considered when it comes to road use and planning.  Cities, states, and federal governments are planning now, and if you want to continue to be able to ride, you have to pay attention to what’s being planned for the future.

The Oxfordshire County Council example is only one of many and soon to be more attempts to regulate riding.  What’s really frightening about this is that the planning is being done now, based on today’s vehicles.

These plans, for some reason, don’t consider how motorcycles will operate in the future.  It’s clear that there are more electric motorcycle offerings than ever.  Those offerings will continue to grow.  But if we let governmental entities prohibit them based on today’s scenario, we’ll lose the ability to ride altogether.  If you want to be able to continue to ride, make your voice heard now.

If you would like to read the Council’s papers in their entirety, they have set up a website with all their documentation.