In racing, the saying is “Always thank your sponsors”. Why should it be otherwise in travel?

The recent exposition about sponsorship by @EvergreenE seems to have found fertile ground, attracting quite a few responses from inmates. Some of them, predictably, were a little self-righteous. As someone who has been successful with sponsorship, let me both argue against that and show you how to score sponsorship support yourself.

Before I do that, though, let me comment on the idea that the only ‘honest’ reviews “are written by someone who bought their gear at retail.” Consider that the person concerned may not ever have sampled other, similar, gear and therefore has no basis for comparison. Then consider that anyone who lays out good money for something becomes invested in it and finds it hard to criticise it. When was the last time someone showed up at the pub on a bike or in riding gear that he or she had just bought, and made negative comments about it?

So rather than relying on someone who has no relevant experience and is potentially prejudiced, it might be better to rely on an ‘expert’.

Okay, got that off my chest. Before I try to disperse the mystery of sponsorship, let me just give a little background. There are essentially two kinds of sponsors: the ones who like you, and the ones who can see a benefit in supporting you. The former (think your Mum and Dad) might well give you money; the latter will want to trade for products – the value of the goods they give you as against the value of the exposure you will give them.

Sensible sponsors do not look for “positive reviews”. They look for exposure, for their products being seen to be doing their job while being used by someone who is respected. How can you offer them exposure? By doing stuff that potential customers will be interested in, and will have access to in print or on the interwebs. 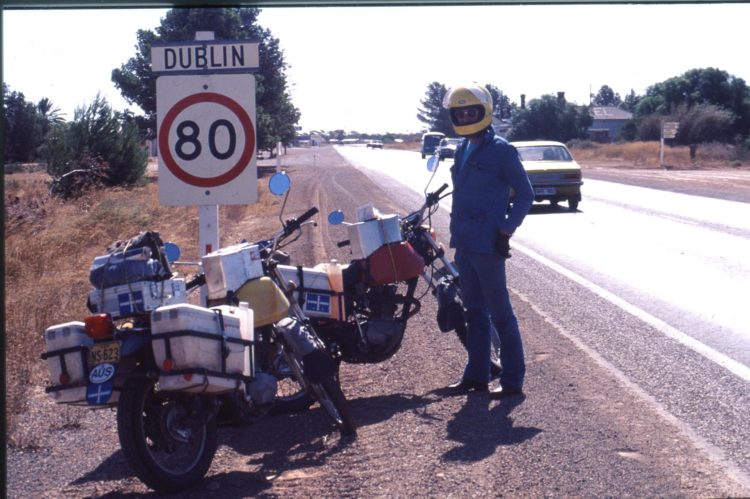 No sponsorship on this RTW ride, but then we had only reached Dublin… South Australia from Sydney. A ways to go yet!

Consider two sponsorship efforts in point, both of them mine. When I set out on my RTW ride I only sought sponsorship from the Australian distributors of my bike, Honda. They came good with a few spares when I convinced them that the ride was well planned. I didn’t even try for other sponsorship because I knew I wouldn’t get any. Why would anyone support a nobody? When I approached what was then Australia’s leading motorcycle magazine, Two Wheels, the predictable response was “write a few stories from the road and we’ll see”. I must have been reasonably good because after those few stories, the magazine committed to running a monthly feature called “Charlie & The Bear go Troppo” and paid me for it. So did a radio station to whom I sent cassettes.

Jump forward a couple of years to England, where Mrs Bear-to-be and I decided we’d had enough of cold winters and began planning a ride to the south, with a couple of friends. By now, I had something to offer potential sponsors: coverage in Two Wheels, the British Motorcyclists Federation magazine, MOTORRAD in Germany and the monthly British magazine Motorcycle Sport & Leisure. I also had a contract with a reputable publisher to co-author a book about motorcycle touring.

I wrote careful sponsorship proposals for all the people I could think of, outlining not only what we intended to do but the exposure to relevant markets that they could expect. I did not ask for money, only product. 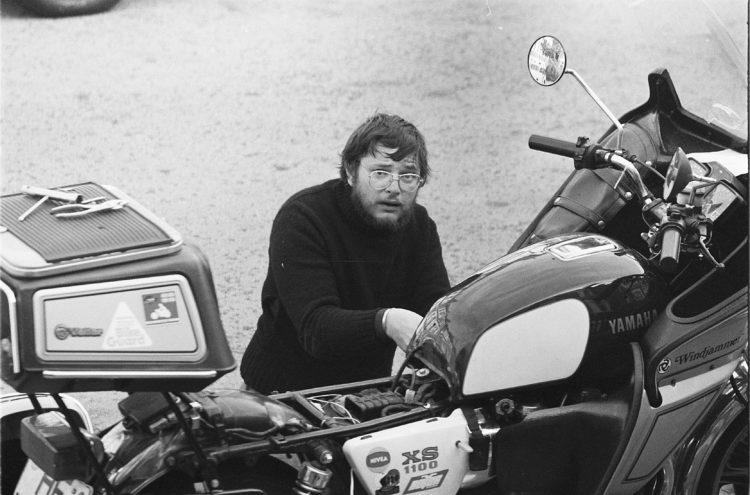 Wiring in the heated hand grips from Oxford; very welcome in falling snow.

The response was overwhelmingly positive. From Nivea skin cream to Duckham’s Oils, Oxford Fairings for, er, a fairing as well as heated grips and heated inner gloves (among other things), Britax for riding suits and Boyer Bransden ignition for our friends’ Suzuki GS750 – we received most of what we asked for. Yamaha Europe lent us an XS1100 (mainly due to my contacts at MOTORRAD magazine), which was fitted with the full Vetter Windjammer fairing and luggage kit; the Suzuki got a sidecar courtesy of Squire and full luggage from Craven. Everyone received Derri Boots. The good folk at Binley’s Camping Supplies provided complete high-quality camping equipment for all of us.

Please note that I had asked specifically for the products we were offered. This was not about a test ride; we wanted the best available equipment for a seven- or eight-month tour which had the potential to be tough in places – and was. As a result, I had no trouble crediting the gear with doing the job I had selected it for. None of it failed or disappointed along the way.

See? I’m doing it again – supporting my sponsors, even though that was forty years ago. 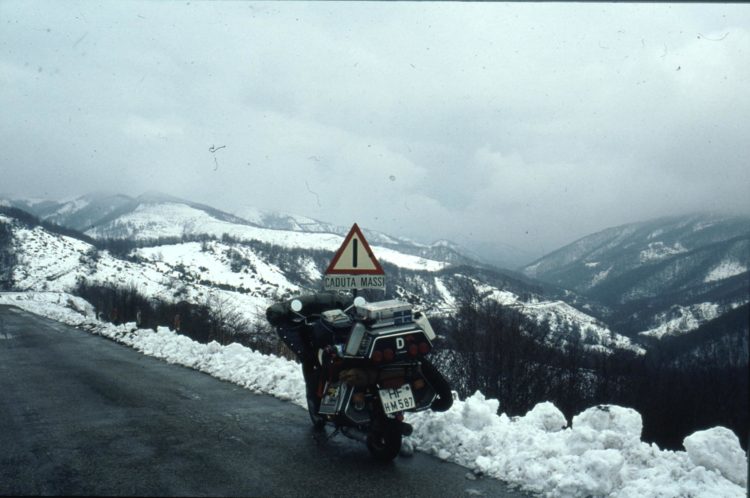 Remind me that we’re doing this for fun.

Want to ask for sponsorship? Get credibility first, any way you can. Write for your club website or newsletter, as well as your local newspaper. You’d be amazed how happy local papers are to run cheerful stories about their readers’ ventures. Submit material to national publications. Above all, set up an internet presence. There are many web publications that accept free submissions; once you’ve been published you can quite honestly claim their readership as yours.

That should get you started. I’ll write a little more about costs on the road, later.