Editor’s note: Read Part 1 of John’s epic ride from Ulaanbaatar, Mongolia to his home in California, USA here. Part 15 can be read here.

The ride from Izhevsh to Naberezhnye Chelny was short, less than 200km.  Exiting Izhevsh I was stopped by a police officer.

Police in Russia, Mongolia and Viet Nam all use the same protocol  to stop vehicles.  A police officer stands on the shoulder in the transition between town and highway with a small baton in hand.  If he waves that stick, you are obliged to pull over.  He waved me over exiting Izhevsh.  We each lacked the others language but both knew it all starts with documents.  Offering my drivers licence and import document I received at the border, he reviewed, smiled, and waved me away. I wasted no time mounting the bike. As I did my shoulder check to enter the road he was smiling and snapping pictures with his phone of me, and presumably my California licence plate.

With this sample size of one, the men I met in Ulan-Ude were absolutely right – a police officer simply doing his job. Not a bribe in sight.  Life is good.

In this post I’m going back in time to July of 2018 when “the kids”, Andrew and Heather, passed through Naberezhnye Chelny.  This is their experience from my perspective one year later at the same location. 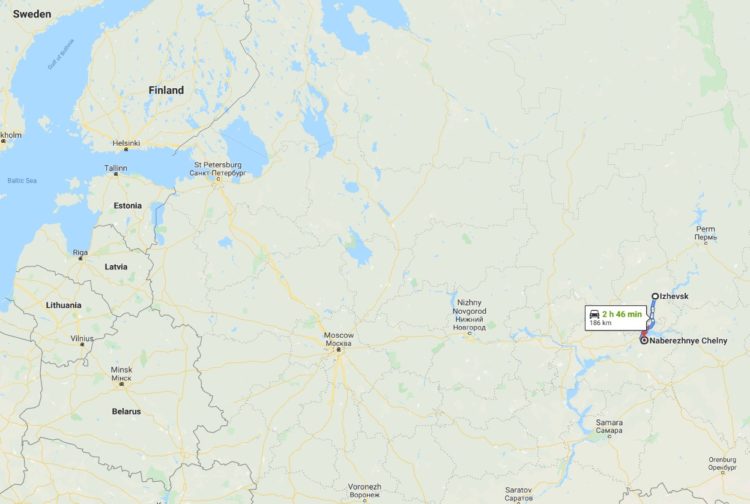 In July 2018 on the highway just northeast of Naberezhnye Chelny Heather experienced a speed wobble while passing a truck at roughly 80MPH. She came off her KLR650, slid to a stop, while the bike came to rest in a field ahead. 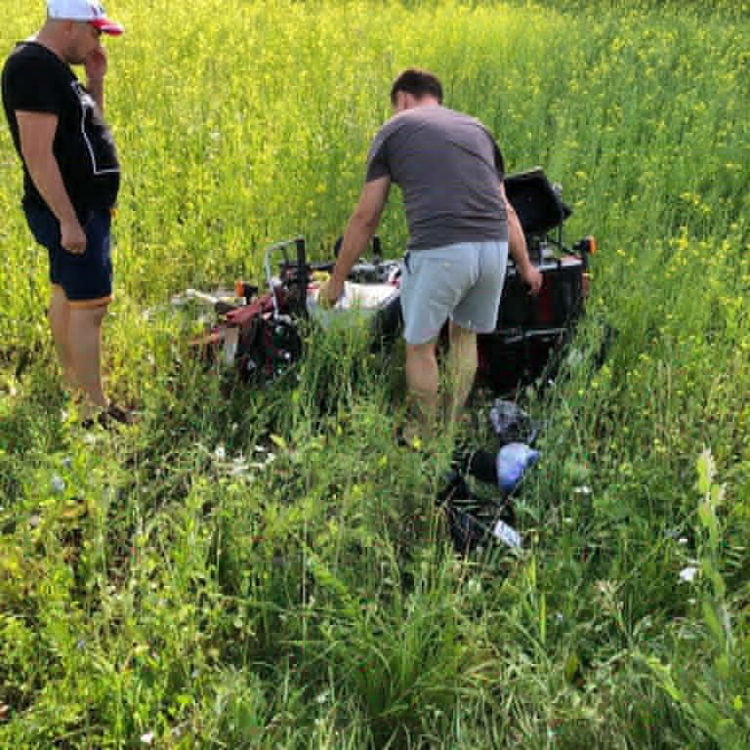 Heather’s Bike in the Field Where it Came to Rest

Miraculously, Heather sustained no serious injuries.  Riding in front, Andrew lost visual and knew something was wrong, pulled over, dropped his machine and started running toward the scene. His intercom came to life carrying Heather’s voice, “I’m alright”, she repeated.

After reflecting that speeds exceeding 75MPH  on a heavily loaded KLR can lead to near tragedy, these two intrepid adventurers went into problem solving mode.  A Doctor stopped and checked Heather for injuries. With help from stopped motorcyclists, Andrew cleared the highway of personal belongings from Heather’s broken pannier.

The bike was damaged but it’s a KLR, down but not out. 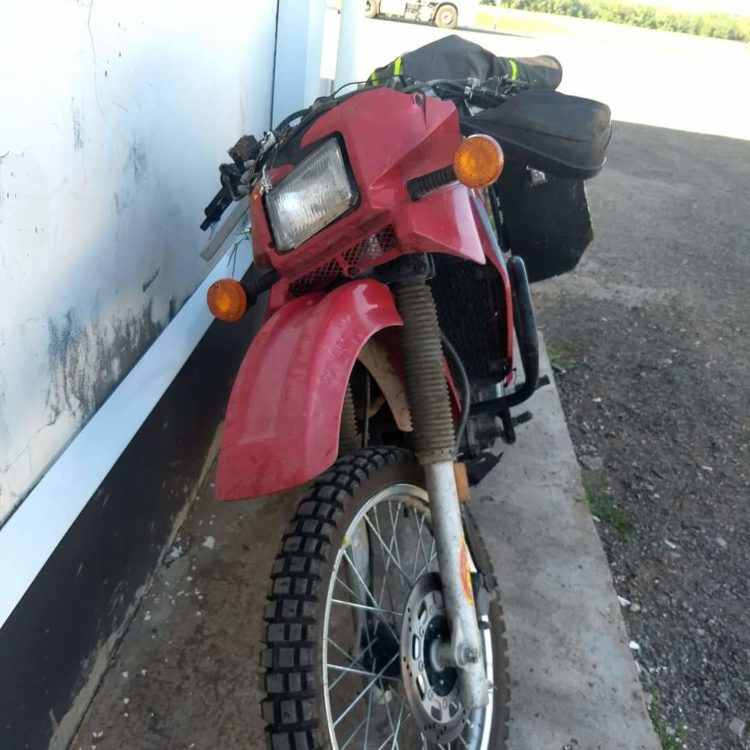 Heather’s Bike After the Speed Wobble

At home in California I heard the news from Andrew roughly 8 hours later. I stressed to him that ending the journey was a reasonable and expected outcome.  He didn’t protest – nor did he concur.  They were assessing the bikes condition.  A local mechanic was already fitting new handlebars and controls.  Working out of a storage unit until midnight on the day of the crash this man was a master of mechanical improvisation (at midnight power to the containers gets cut). 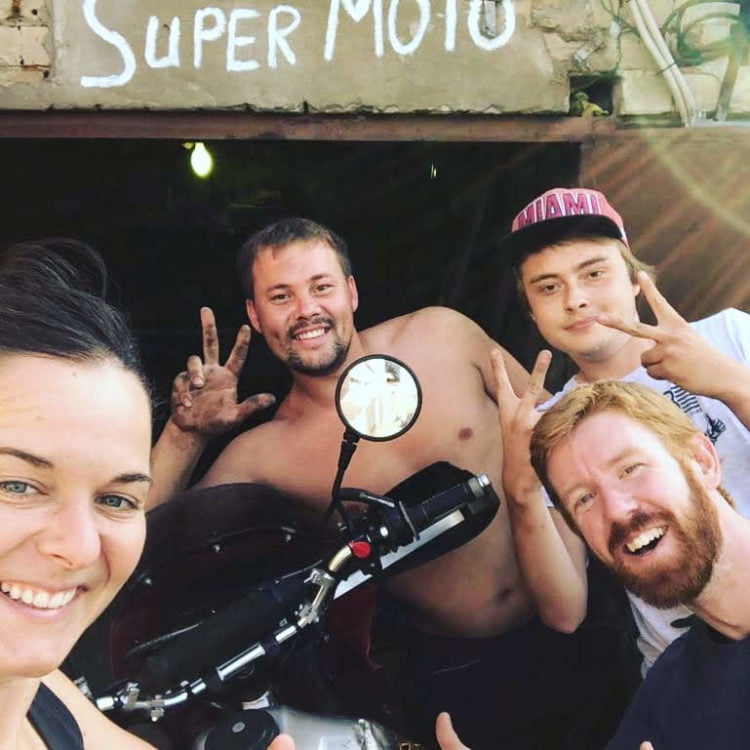 This Russian mechanic (with his wife by his side), works out of a storage unit. He brought Heather’s bike back to life.

But what of Heather’s physical and mental state?  Fine – was the answer.

Heather and her parents had similar conversations.

Now in 2019 as I ride these roads I think, “if that happened to me – would I continue?”.  Thankfully, that question remains unanswered.  I do know this;  out here things are simpler.  Each day you travel from point A to point B.  You eat, drink, ride, sleep and service the machine.  Some days you meet new people and share the experience which is good.  When you have a problem, you solve it locally in real time often with unselfish help from strangers.  It’s a simple way to live.

There is one more dimension to this story of Heather’s brush with destiny.  Weeks earlier while still in Mongolia Heather and Andrew met a group of Russian bikers briefly at roadside.  Andrew exchanged Instagram addresses with one of the young guys while Heather took a photo with the elder of the group, Michail Grek. 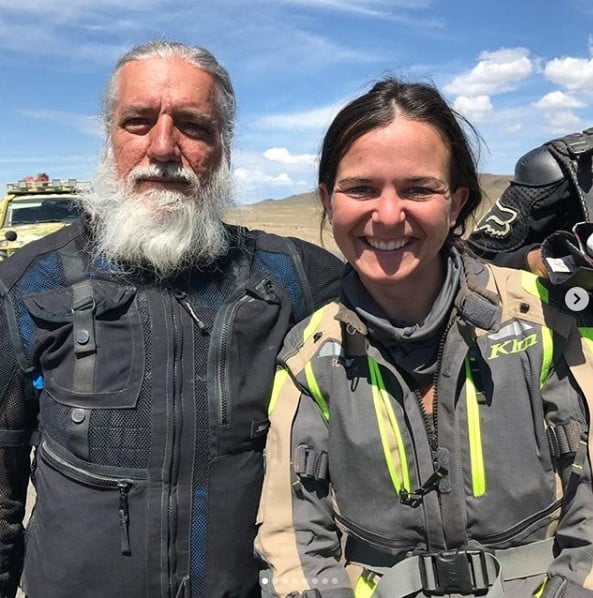 With the bike repaired they received a message from Michail Grek, their roadside Mongolia acquaintance. Coincidentally, Michail lives in Naberezhnye Chelny.

Welcoming some local knowledge, the kids arranged for Michail to take them around the city to do errands. After getting a replacement helmet and duffel bag, Michail then offered tea which took the trio to the Church of St. Seraphim of Sarov in Naberezhnye Chelny.

Michail showed them around the church, including his carrier pigeons, a small vegetable garden, and a beautiful chapel. As Michail walked them through the church it became apparent that his flock included more than old world messenger birds.  The staff in the church greeted Michail with deference that gave Heather and Andrew pause. Little did they know that this very unassuming man, to them a fellow adventure biker, was a significant figure in the Russian Orthodox Church.

It was only as they were ushered into his office did they realize Michail Grek is The Archbishop of the Russian Orthodox Church of St. Seraphim of Sarov in Naberezhnye Chelny.  He blessed the couple and gave them a book on the history of the church to keep for the journey ahead.  Heather and Andrew were deeply moved and ready to continue the journey.

Naberezhnye Chelny Russian Orthadox Church of St. Seraphim of Sarov  – “Acquire a peaceful spirit, and thousands around you will be saved.”

In closing here is some raw video of Heather right after and on the evening of the crash.  The audio is poor but if you get past that, the human spirit here is strong and visceral. It took courage to get back on that machine and complete the journey.