I’m in Narva, an Estonian border town with Russia. The border crossing was long, hot, and challenging. The bike starting issue has gone from intermittent to only “bump starting” works. “Bump starting” essentially means you push the bike in gear with clutch pulled in, release the clutch and hope she fires – complete with 100+ pounds of gear. I was drenched in sweat after the first border stage.

My documents are not 100% so the guards sat me outside while they ran searches – same drill as entering Russia. In the end, I was warned, admonished but eventually released to push my bike into Estonia.

I roll into Narva finding the apartment inside a well-architected building and haul the gear upstairs. I open the door into a clean entrance with fridge, microwave, and lots of hooks and hangers. Further inside, beds, table, chairs, and balcony. The shower is large and bright. Good, I’ll be comfortable here to get the bike sorted. Once settled I meet Aleksei. Literally a bear of a man, 40 something, former Russian military officer, boxer and owner of this building. He’s heard I have some bike troubles and helps me extend the stay for a couple days. As quick as that Alex is gone for the evening. 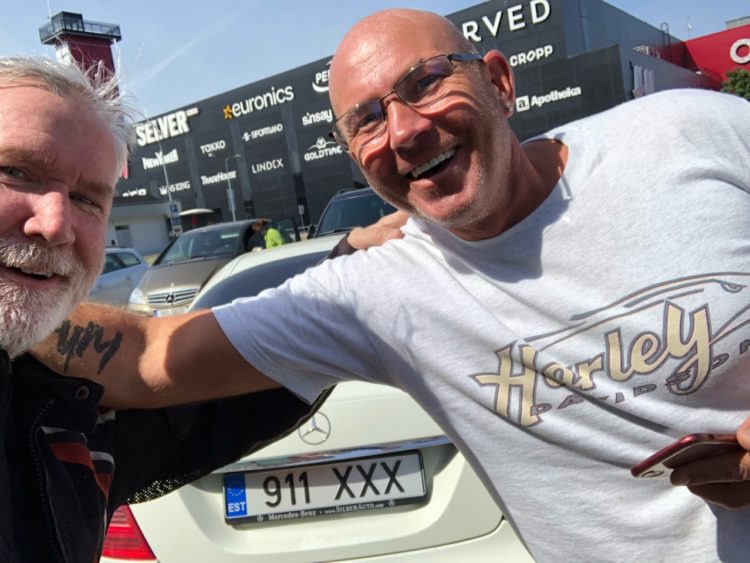 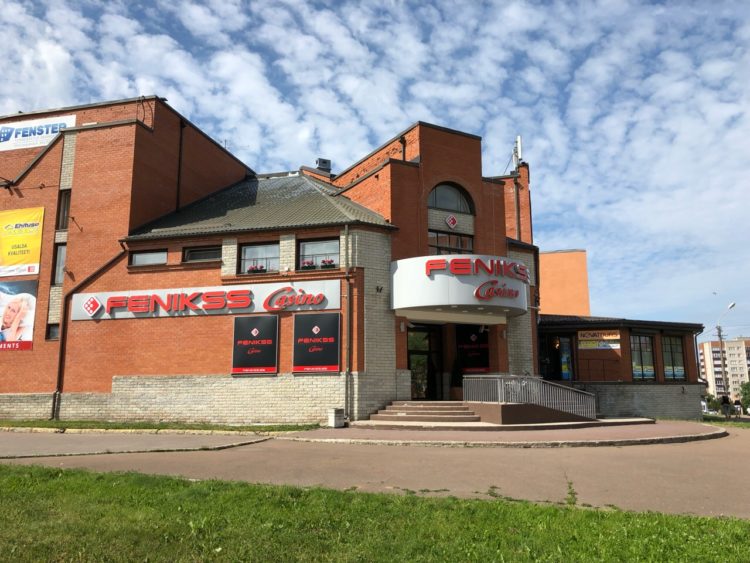 I spent the rest of the night reading the bike manual and studying the wiring diagram (plus WhatsApp calls to Vicki and Marnie for moral support). I bought a volt-ohm meter in Saint Petersburg and so begins the search for short, open or something else. The load test on the battery shows it as marginal. Not surprising, I’ve got high-intensity headlights, secondary LED foglights, heated gloves, and iPhone power all add to the little KLR’s original electrical load. Plus, I tortured that battery in Mongolia last year then let it sit for the winter. I plan to search for a battery in the morning.

As I start the day with the bike in the parking lot tracing wires a big Harley with an equally big rider pulls up. Aleksei, his limited English completely eclipsed by his nonverbal bravado, parks, and dismounts. He’s on the phone and in seconds points at my helmet, the back of the Harley and we were off. The ink on his arms, equally bold, declares in Latin: Speak/Act, and in English: Freedom Forever – interesting – former Soviet Military.

Two parts stores and a mechanics shop later, the recovery plan is coming together. At each business and points between Alex knows not only the staff but pretty much every person that comes and goes. He greets each with the sincerity of family – it’s classic small-town culture. Pretty lucky for me, the guy who just happened to need some help. I’ve probably gone on a bit more than I should but indulge me. The mechanic not only changed the battery but located a harness short. I’m good to go. Meanwhile, Alex and I cruised around in his snow-white AMG Mercedes Coupe. Entering the Merc I did double-take when I saw the license plate: “911 XXX”, then as we drove around the corner to his building I saw the front for the first time complete with marquee carrying a single word “Casino”, I pointed, “Legal in Estonia?”, “100%” from Alex. I smiled and said, “Alex, you’re a bit of a gangster”, Alex grinned “noooo, only a little, maybe”.

The mechanic did take a while to find the short and I asked Alex how far we were from the Baltic Sea. That’s all it took and we were back on the Harley, with me wrapped in the Barcalounger back seat – what luxury – I can swing my head side to side with no regard for traffic- Nirvana!

The narrow blacktop snakes through dense pine woods that are maybe 50-75 years old – reforestation – no branches on any trunks below 50 feet, pine needle floor with shafts of evening sunlight breaking through. A river runs on my right, we pull over, Alex explains that the Narva river, flowing out to the Baltic, separates Estonia and Russia, as evidenced by the military patrol boats every kilometer or so. We’re next to a monument of the Narva tank, a WWII amphibious vehicle used to battle and defend these shores. As we ride further, I see, on the riverside, cemeteries that are old and overgrown but nevertheless heavily wreathed – this goes on for several kilometers. I ask Alex, “Etonians?”, “No Deutsche and Russian”. I’m not spiritual but the power of so much life spent in one small beautiful area as this touched me. 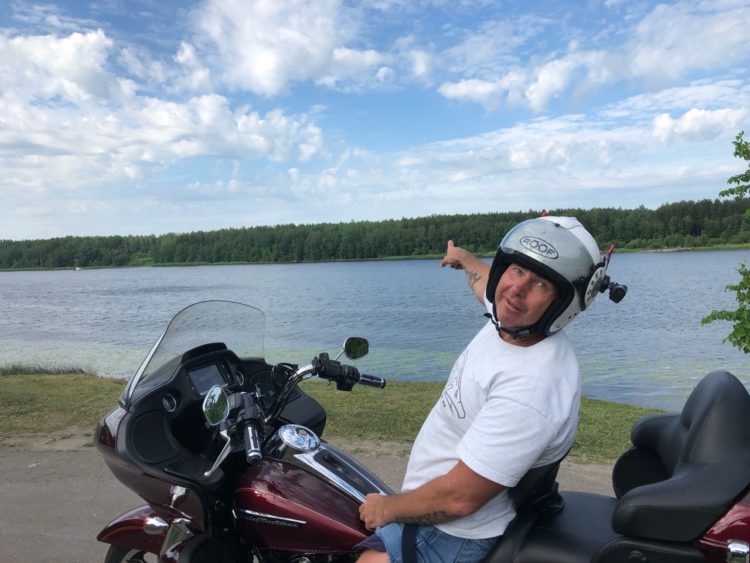 Narva Estonia Aleksei Points at Russia Across the Narva River 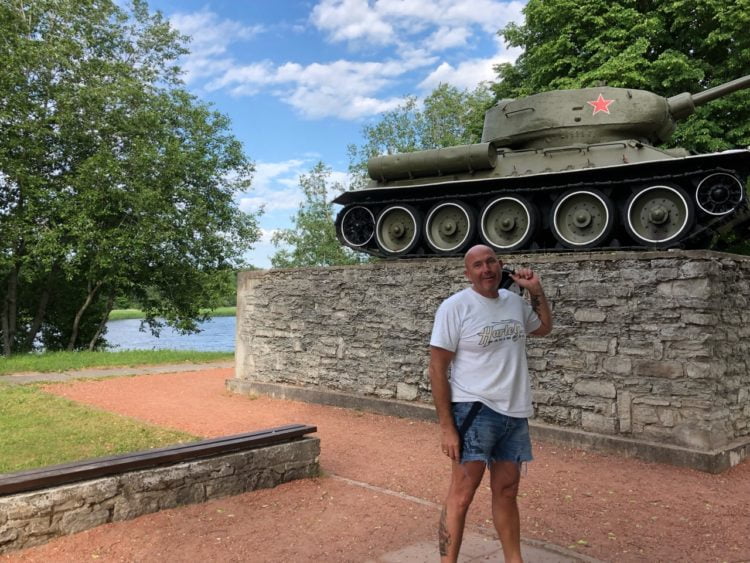 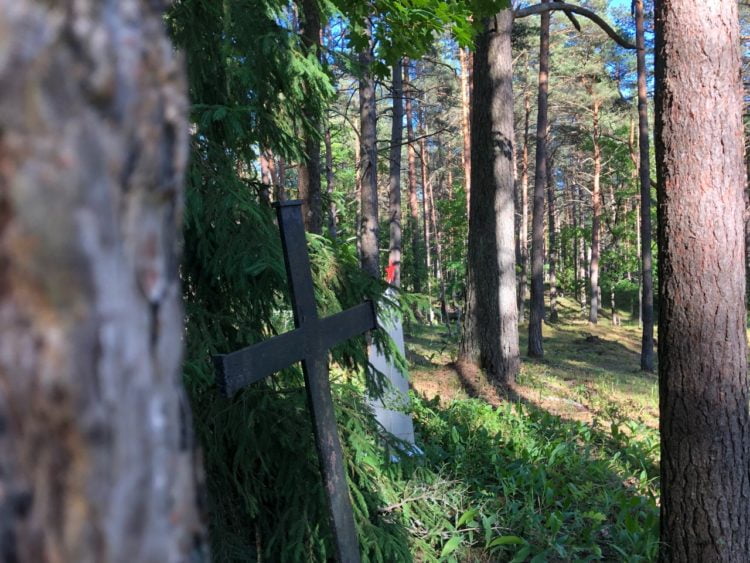 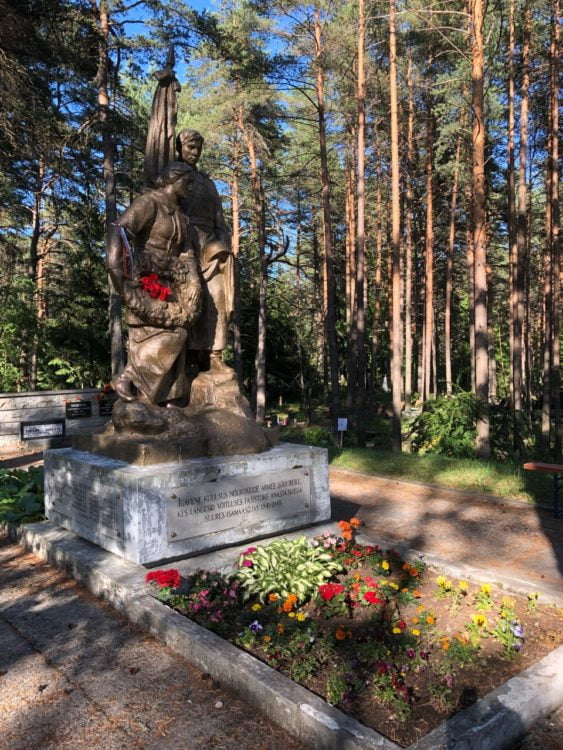 Narva Estonia Memorial in Reforested Area Along the Narva River

We emerged from the tall pine canopy to a fine sand beach that stretches for miles. The Gulf of Finland off the Baltic Sea. 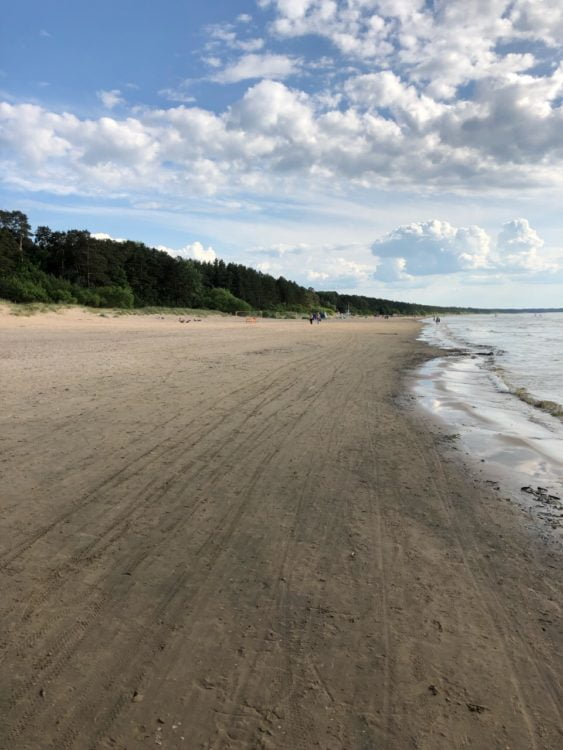 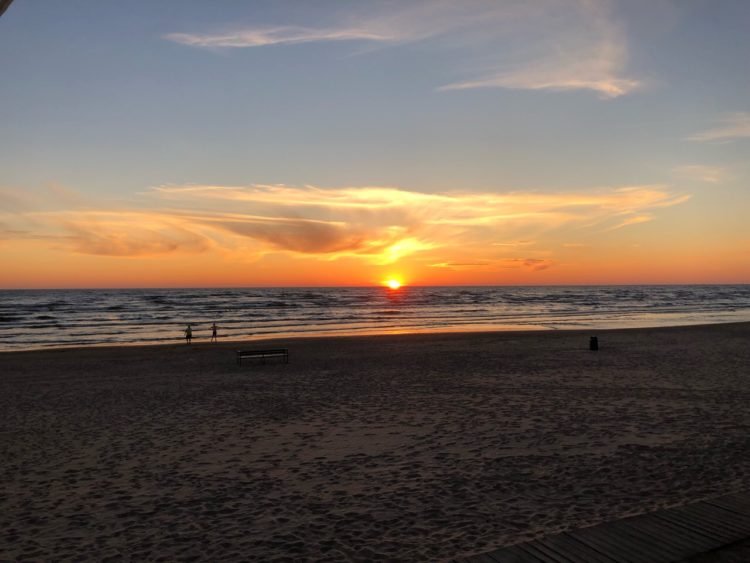 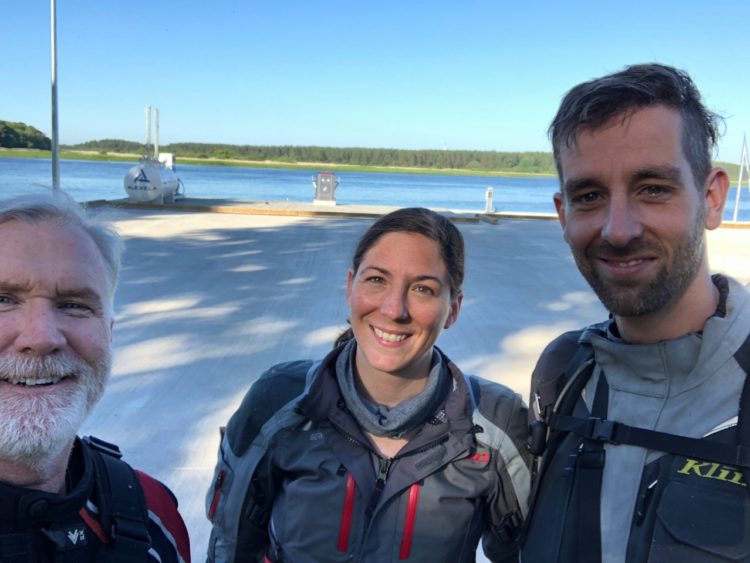