Today was a good day. I left Kemerovo around 9am. Perfect riding conditions, 20C with light winds. I had a short ride today to Novosibirsk – roughly 300km. 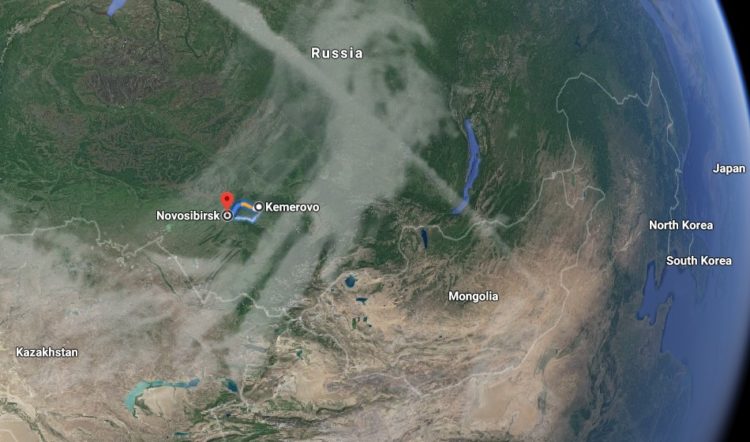 I’m getting some routines dialed in, simple, good things, like a truck-stop breakfast. I also now have Google Translate loaded with phrases before I lose 4G connectivity. Little things like that are making life flow smoothly. This particular restaurant was very homey. Best of all, I had a fresh brewed cup of coffee that was so strong yet smooth – I had a second. 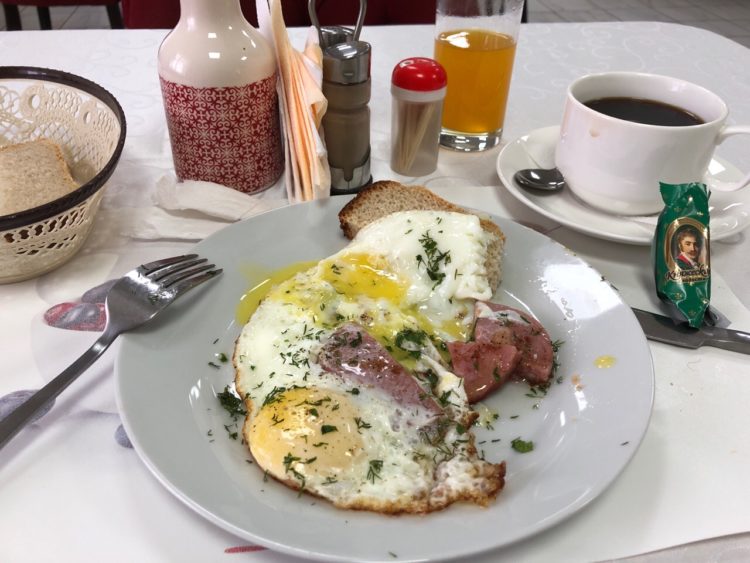 Delicious Breakfast on the Road in Siberia

I got out of my cold weather suit and into mesh armor just after breakfast. 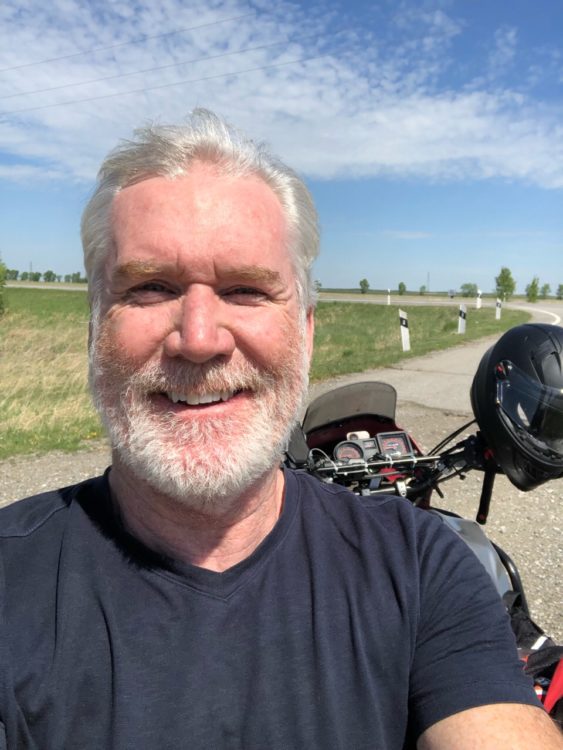 A warm day on the road in Siberia

I pulled over at a nice lake took pictures and changed. 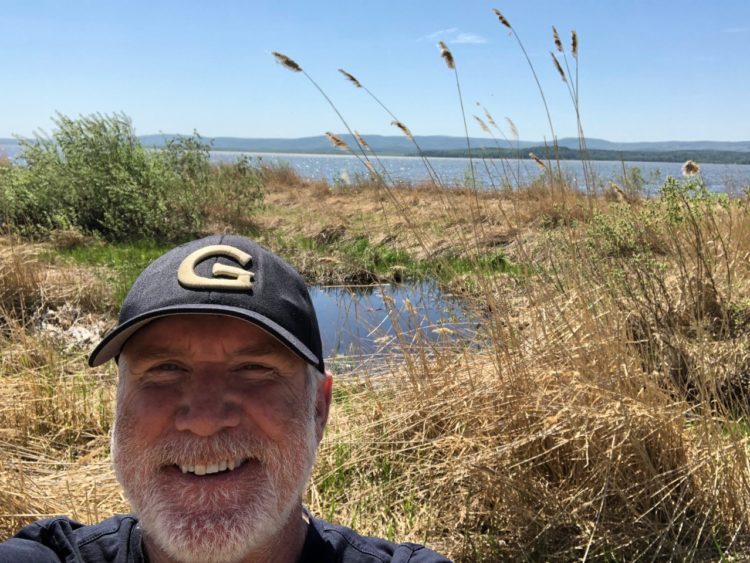 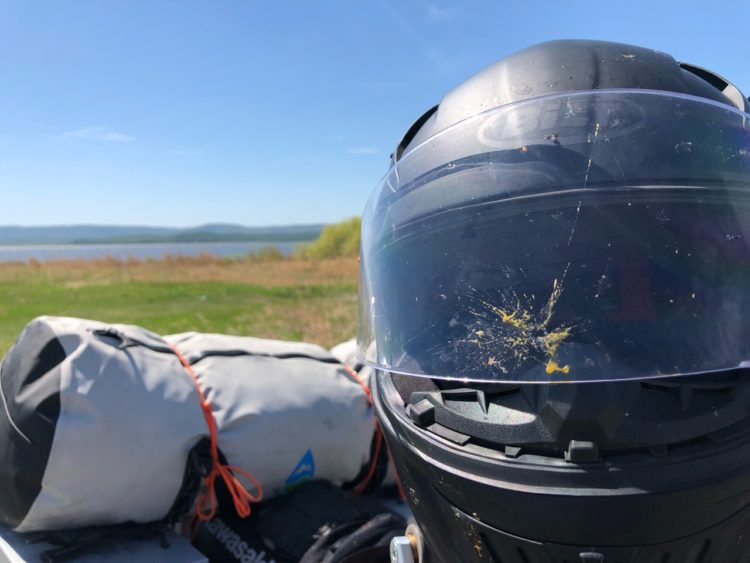 I thought about nerve today. What it takes to have it, how I lose it, and what it takes to get it back. It’s funny, in business I was never the natural. I was the “safe pair of hands.” The naturals are people that flow effortlessly in words and action– whether it’s BS or not, it just flows and people around usually catch the wave. The naturals are a special minority – we all know and love one or more of them. The rest of us are stay at home defensemen in hockey, outfielders in baseball, linemen in football, and so on. These critically important (while admittedly dull) roles see the individuals who fulfill them having to constantly build up the nerve to engage, participate, and perform. And so it is with the rest of us in daily life.

Riding out here is no different. Each day I have to summon the courage to suit up and ride. Today was easy, but it took nerve a couple days ago near Lake Baikal and West of Tulun with high winds and cold rain. When I lose it, getting the nerve back is tough. In a Doors song, Jim Morrison called it the fragile egg shell mind of a child – at least that’s how I remember it. So how do you get the nerve back? On the bike, and generally when it’s one against nature it isn’t easy but the options are usually clear.  You either suck it up and roll on, or you pull over into a world of shit. In real life it’s not so obvious, and that’s where I think it all comes unraveled.

But wait, beyond the naturals, are the “super naturals.”  I’m going to give you one real, larger than life, example.

At the turn of the century the company that brought me to California was bought by a pair of Silicon Valley Rock Stars: Mory Ejabat and Jeanette Symons had just sold their company, Ascend Communications, to Lucent for over 20 Billion USD. They were flush. This dynamic duo immediately turned around and got 500M USD VC funding to, “do it again.” Next they bought Premisys for 250M USD, did a reverse IPO and milked us for voice over IP technology! These two were so competitive that they each had a private jet. Mory hired an ex-Vietnam pilot named Chuck. Jeanette, DIY to the core, flew her own Cessna Citation – the largest single pilot jet of the time. Mory and Jeanette are what I call “super naturals.”

I was with those two for 7 years. Jeanette was my boss for the last few. We started off professionally at each others throats but in the last few years, Jeanette and I developed a good friendship. Imagine any elite Silicon Valley technologist and magnify all the stereotypes. That’s Jeanette: brash, brilliant, defiant, and always a risk taker. Late in 2007 we were climbing at Ironworks gym in Berkeley and the conversation got around to challenges of strength and endurance versus intellect and business strategy. I said hands down I prefer challenges born of nature and the outdoors as opposed to purely cerebral tests. I could see this piqued her curiosity since I knew she biased toward boardroom showdowns – or at least was more comfortable than I given the same situation. A few weeks later I learned that Jeanette had crashed on a cold rainy night in Maine and with that the world lost a super natural. I liked when Mory spoke at her service and he stared right into the crowd and said, “Hey, Jeanette made a lot of you guys rich… Thank her for that.” Straight talk defined that pair of super-naturals – always.

Pilot in deadly crash did not de-ice plane

Sorry folks that was a very dark tangent and there’s only one thing I find pulls me out of a funk that deep – good food.

So now I really want to tell you about dinner. I was looking for a Sushi place and happened into Yurk. “Happened” is too loose a word. I was more accurately corralled. 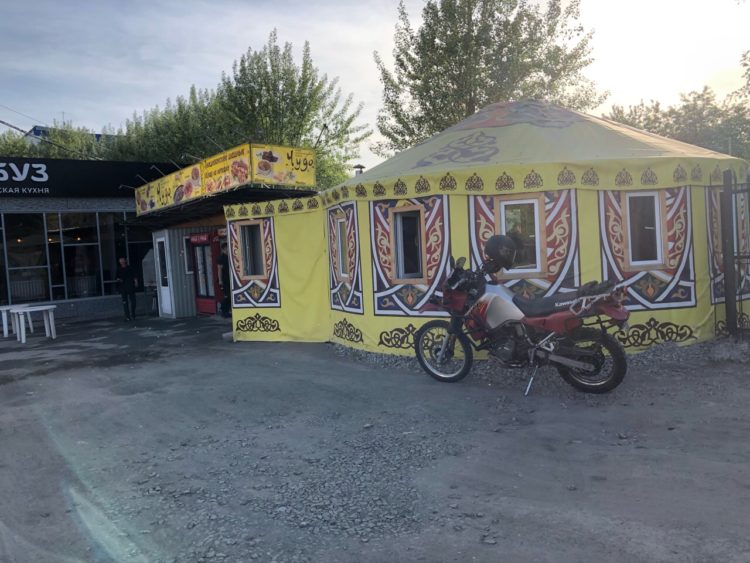 Yurk Resturant in Novosibrisk Run by People from Uzbekistan

But wait, a bit of background. Novosibirsk is the most cosmopolitan Russian city thus far. I even found a few English speakers, and in terms of restaurants – diverse. So I’m in this Yurt. My host has no English so we go for Google translate. 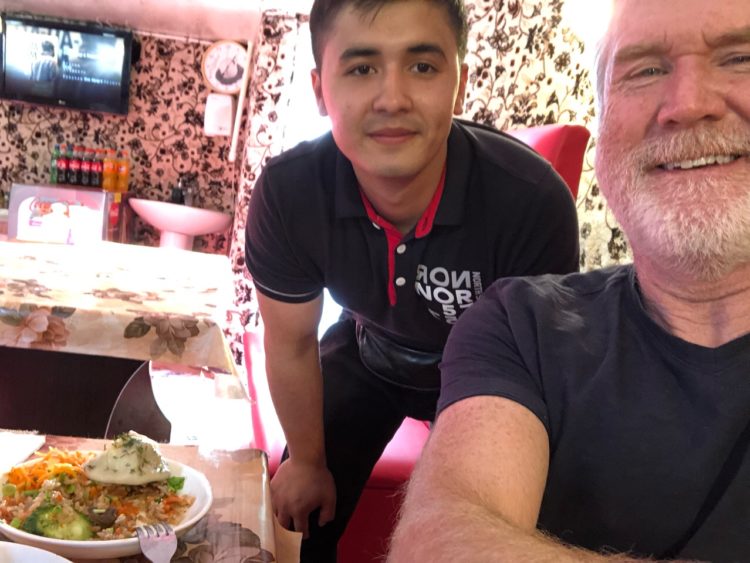 My Host Insisted Dinner was his Gift to Me

Turns out these guys are from Uzbekistan. Check your map but it’s east of the Caspian Sea (that sea horse shaped body of water marking all of the “stans”). 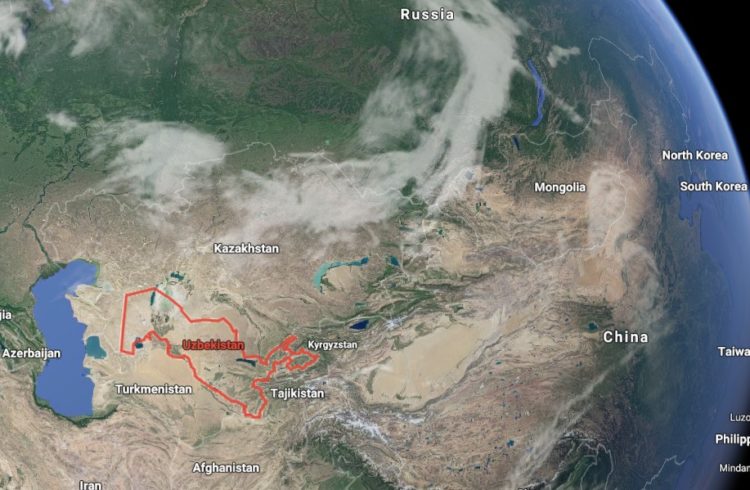 Well, my host through visuals and translate sold me on a shisk-kabob of sorts. But it was better than any I’ve ever tasted. Lightly seasoned with dill, flamed to perfection, literally mouthwatering. 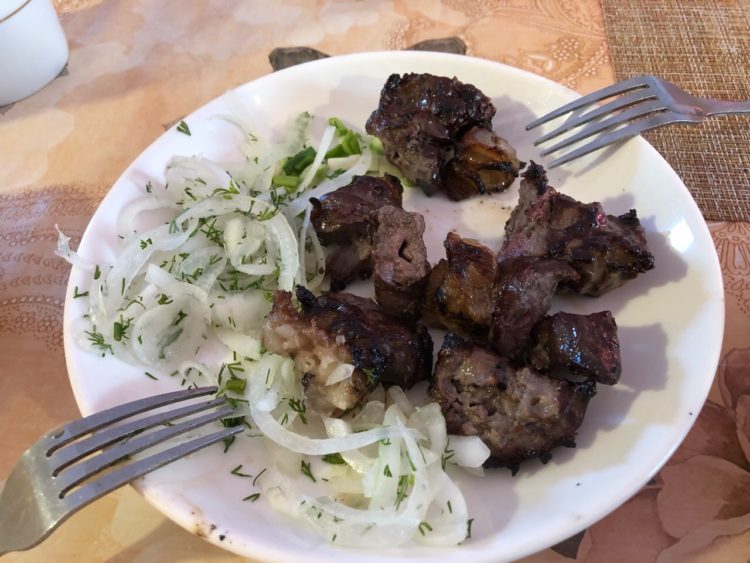 And before the lamb he brought out an oven fresh round bread with a warm dipping sauce. 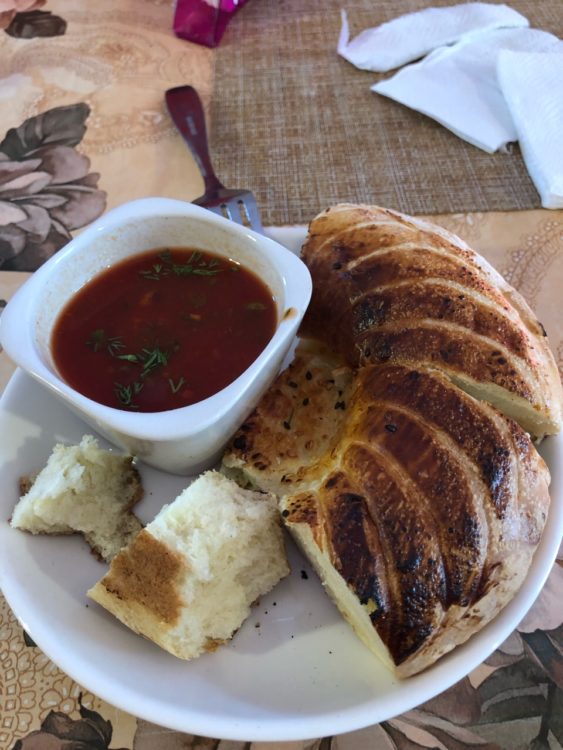 To accompany the meat he produced a plate of warm vegetables seasoned perfectly. 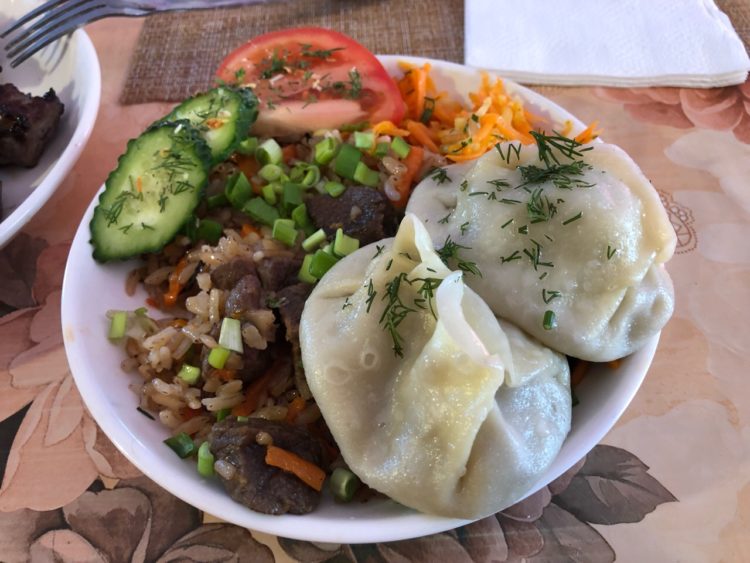 I was in heaven – by far the best meal so far. As I got up to ask for the bill – he simply waved me out of the Yurk indicating that tonight l was his guest. Amazing.

And Bourdain got bored with all that – dammit… Another “super natural” 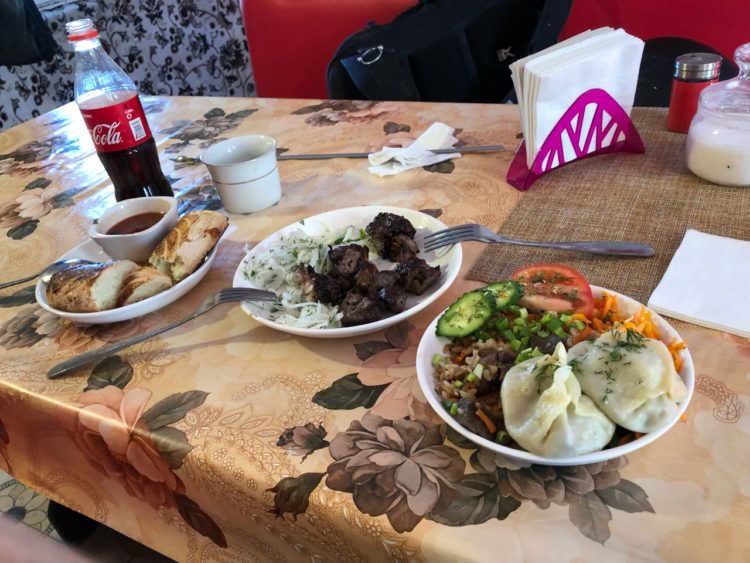 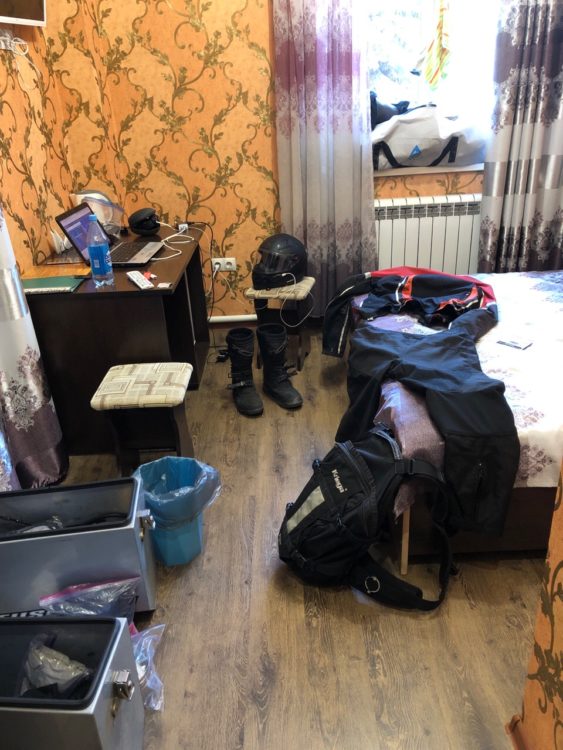 Finally, a clean bathroom with soap and towels – life is good. 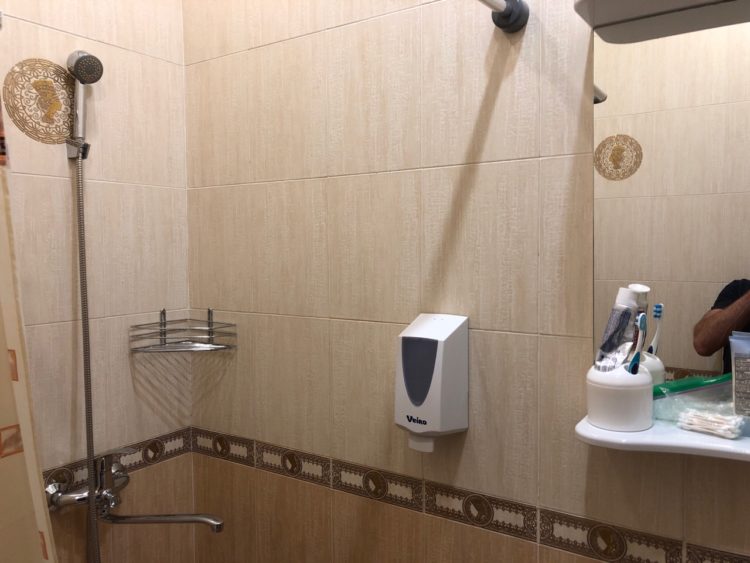 Another final piece of Red Green wisdom: “Keep your stick on the ice..” Ps. I’m almost 1/2 way to Moscow. Life is good.