My touring mate Charlie and I had recovered our bikes from the good ship Kota Singapura which had carried them, and us, over the seas from Fremantle in Western Australia to Singapore. That recovery wasn’t easy. Firstly, the ship had retreated to the roads (off-shore) after dropping its passengers. It took a couple of days before it returned with its main cargo – sheep – and our XL250s were unloaded. It did give us time to buy insurance from the Motor Club of Singapore. Then we couldn’t get them started until Charlie drained the carburettors, which had become clogged as all the rubbish in the fuel settled out due to the ship’s engine vibrations.

We rolled up to the Malaysian border ready for anything, or so we thought. Immigration and Customs went well at the northern end of the Causeway, but we didn’t seem to be able to locate anyone to take the initial section of the triptyque or Carnet de Passage. The idea of this is that a border official stamps and tears off that section, the next is stamped and detached when you exit the country leaving you with the final lavishly stamped one, and somehow the first and second meet up in the bureaucracy to demonstrate that you have both imported and exported the same vehicle.

In this case no-one was interested. One chap in civvies told us to get moving and clear the way; I made the mistake of asking him to help me find a Customs officer. He drew himself up to his full, not especially remarkable, height and thundered: “I am a Customs officer! Go!”

We went. This was to prove to be Mistake Number 1, the result of which will emerge later.

The east coast of peninsular Malaysia was, and I think still is, a pleasant ride. We stayed the night in Mersing, where we discovered that the museum was dedicated to the possessions of the local rajah, including his toothbrushes and underwear. Different strokes for different folks.

Back on the road next morning I ran up the back of Charlie’s bike because I was reading my map when he slowed for a pothole. The result was not pretty, and I will be eternally grateful for the locals who not only loaded us into a convenient car to deliver us to hospital but also took care of the bikes.

As I was being rolled into Kuantan hospital on a gurney, I suggested to the doctor hovering over me that I had broken my left scapula. I’d broken the other one some time previously, so I thought I knew what I was talking about. She, however, an American on some kind of Third World placement (possibly punishment for arrogance), replied that “I’ll tell you what you’ve broken.” Ah. Mistake Number 2. Never self-diagnose. 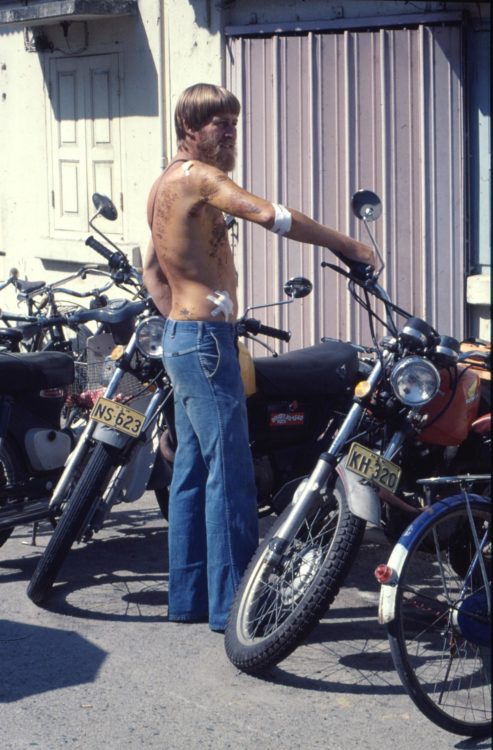 Charlie didn’t break anything, but he lost a lot of skin. Waiter, more Guinness!

Once we’d been treated we moved into a cheap hotel in town while we recovered and Charlie sorted out our bikes. Every evening we would sit outside the downstairs restaurant and drink copious amounts of Guinness. In Malaysia, Guinness is promoted as a health drink, so we attracted a regular audience admiring these amazingly health-conscious Australians.

Time came to move on. I couldn’t lift my left hand to the handlebar and had to use the other hand to put it there, but despite the accompanying pain I could ride as long as I didn’t use the clutch too often. That pain didn’t show any sign of going away, so at our next major stop, in Georgetown on Penang island, I went to the hospital.

“No wonder you are in pain,” said the Tamil X-ray technician. “You have a crack as wide as my thumb in your left scapula.”

With careful pressure bandaging, the crack eventually healed; I have nothing but praise for the Malaysian medical system, possibly apart from seconded American doctors. 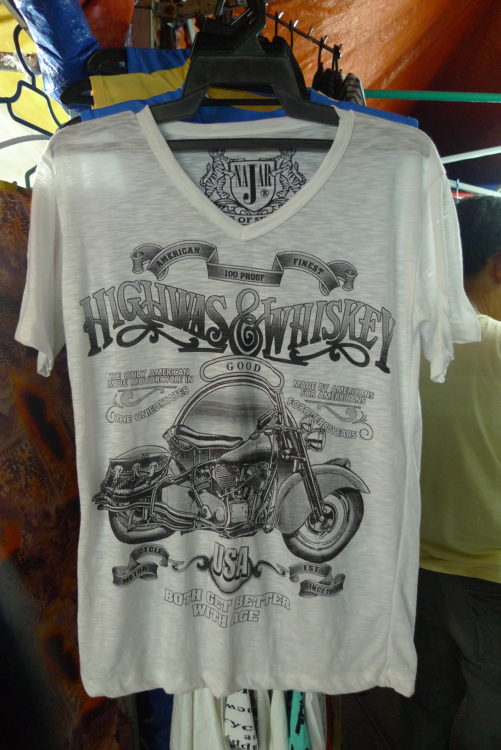 There are so many things wrong with this t-shirt that I won’t even try to list them. Wish I’d bought it!

At the Thai border our first mistake caught up with us.

“Your Carnets have not been detached,” said the fierce-looking Sikh Customs officer. “How did you get these motorcycles into Malaysia?” I told him about the officer on the Causeway. “He was a fool! It is your responsibility to ensure that the Carnet is properly handled!” he growled. “It is not good enough!”

For a moment I thought he might make us ride all the way back to the Singaporean border, which he was perfectly entitled to do. Some years before, one of his colleagues had almost refused me entry from Thailand because I was riding a bicycle. But eventually he decided to overlook ‘our’ negligence and ignore the Carnets entirely. After all, he didn’t want to insert a piece of paper into the system that had no counterpart. We breathed a sigh of relief and headed for the Thai border, which would prove to be an entirely new kind of tribulation…