Two versions of the revised 2020 Honda Africa Twin have broken cover.  Both variants have significant updates.

It’s been known for quite some time that the Africa Twin would be receiving a larger engine.  But the details behind it were not clear.   Now, the Africa Twins sport a 1084cc engine courtesy of a 5 mm stroke increase.  Its cylinder head has been revised and Honda has fitted a larger throttle body to provide a more direct shot into the combustion chamber. 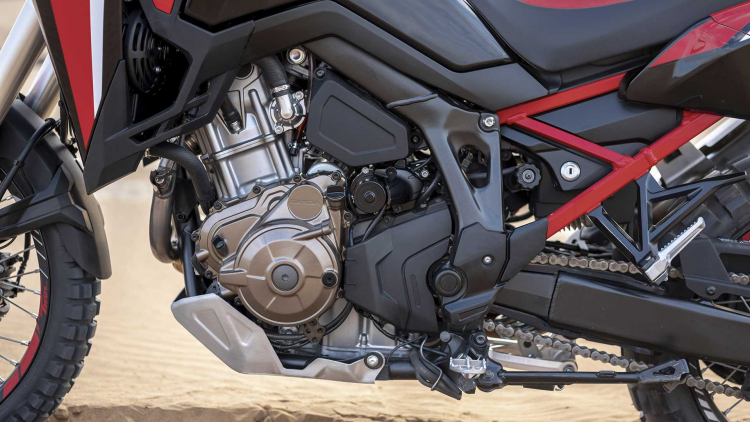 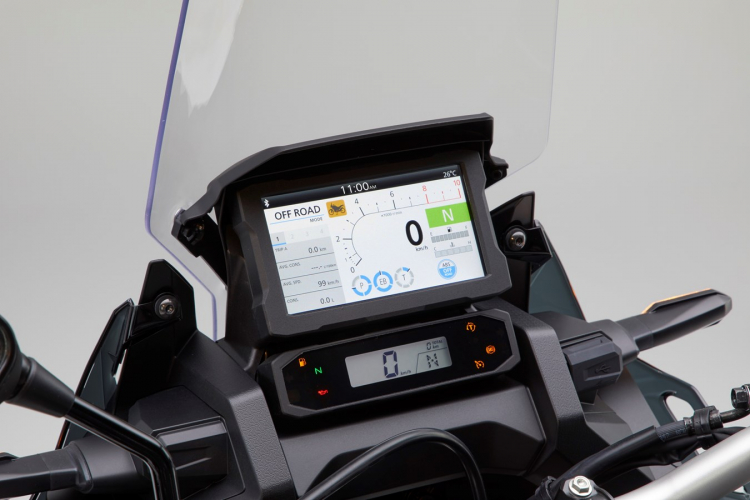 The bike also has a new full color 6.5 inch TFT display.  Honda calls it the Multi-Information Display (MID).  Interestingly, it is claimed to be touch-sensitive.  If you are too busy riding to deal with its touch display capability, it can also be controlled via a set of controls on the left side handlebar switchgear. 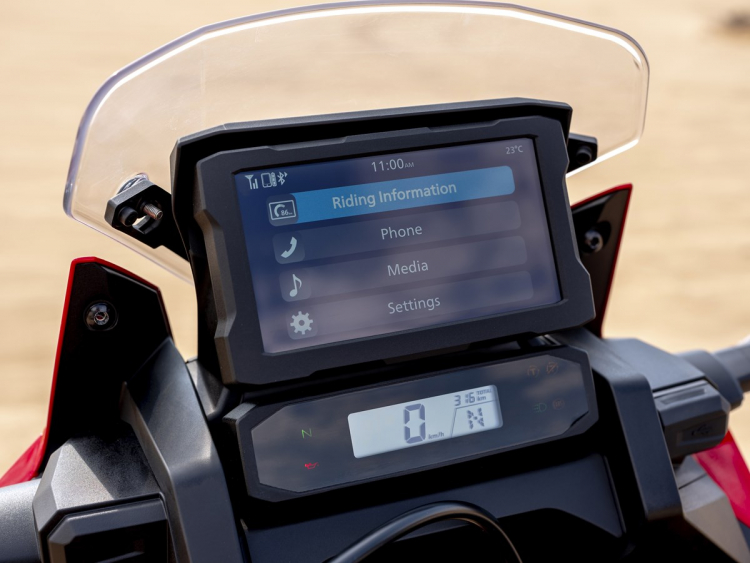 The new display is Apple CarPlay compatible.   It also supports navigation and music apps via Bluetooth for both Apple and Android products.  There is also a second “mini-dash” which displays speed and gear for those times when the MID is used for other functions such as mapping etc. 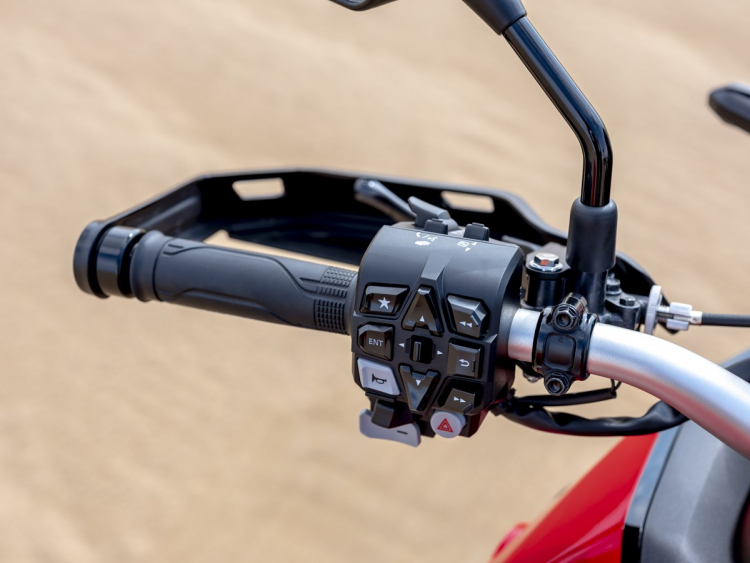 Although the Africa Twin has a touch screen, settings can also be adjusted from the left side handlebar.

An increase in engine size often results in increased weight.  To combat this, Honda made some changes to deliver the new Africa Twin with a weight that is less than the 2019 version.  Honda claims that the Africa Twin (sans DCT) tips the scales at 500 pounds wet.

To reduce weight, the chassis was revised and lightened.  According to Honda, rigidity around the steering head has been “optimized” for front end feel and grip.  The main spars are also slimmer and straighter.  This setup has allowed Honda to remove the front cross pipe.  These changes shave 1.8 kilograms from the frame. 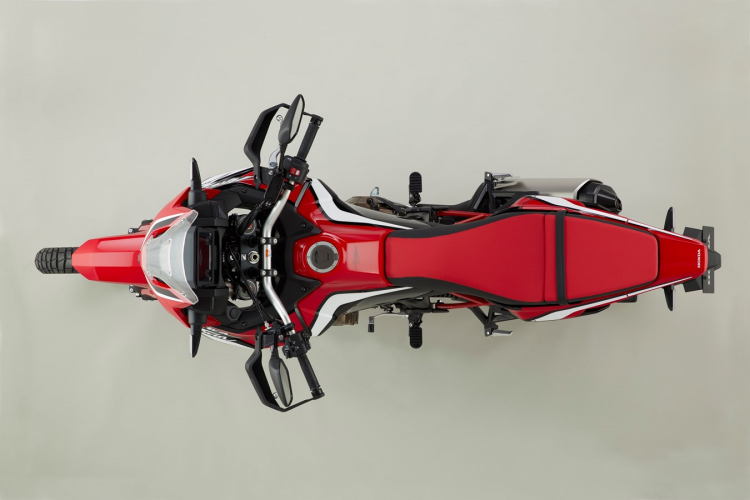 As seen from above, the Africa Twin appears narrower than some of its competitors.

The subframe is now an aluminum bolt-on item and is 40 mm narrower.  The narrower subframe makes the reach to the ground shorter and reduces weight a further 500g.  According to Honda, the new Africa Twin lost a total of 5 kilos during its transformation from 2019 to 2020 model.

Seat height is also revised.  The new machine can now be set up with a seat height as low as 33.4 inches instead of the standard 34.3 inches.  If you add Honda’s low seat option, your reach to the ground falls to 32.5 inches.  If you’re long of inseam, Honda also offers a high seat option which raises seat height to 35.2 inches.

Suspension remains nearly the same with a Showa 45mm inverted fork offering 9.1 inches of travel.  At the rear, a Showa shock is mated to at Pro-Link swingarm that provides 8.7 inches of travel. 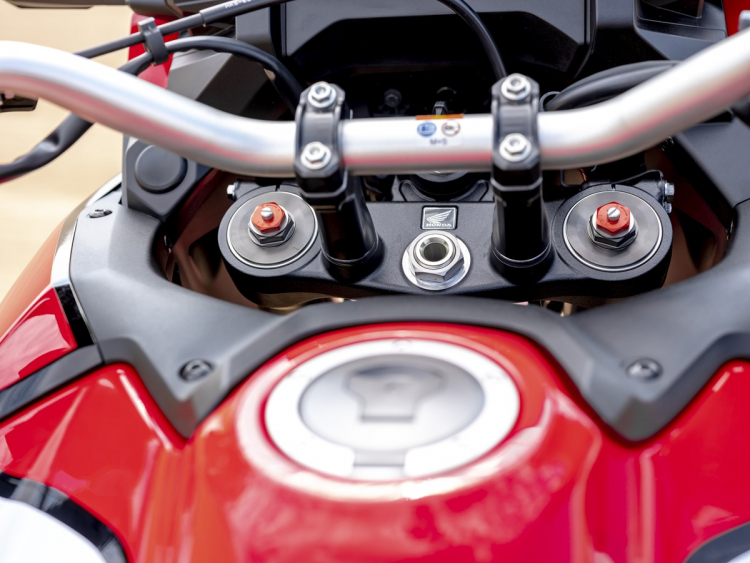 Braking power at the front is courtesy of a pair of four-piston calipers grabbing twin 310mm discs.  At the rear, a single-piston caliper clamping on a single 256mm disc helps to bring things to a halt.

Wheel sizes are unchanged.  A spoked 21-inch spoked wheel remains at the front with an 18-inch spoked one in the rear.

Styling and other features

Styling changes are subtle.  The front fairing is redesigned.  The headlight shape has been changed with a revised LED setup. 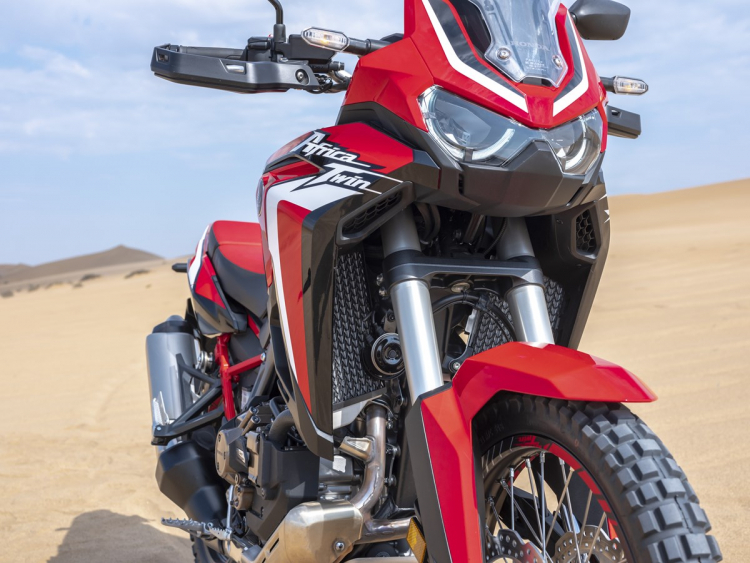 A more aggressive look for the revised Africa Twin.

Honda also developed and incorporated an “Emergency  Stop Signal” function.  When braking suddenly from at speeds over 50 KPH (31 MPH), the bike’s hazard lights will flash to warn other road users that a hard stop is in process.

Turn signals are now auto canceling but do not use a timer.  Now, “the system compares front and rear wheel speed differences and calculates when to cancel the indication relative to the situation.”

The Africa Twin Adventure Sports (ATAS) comes with all things the Africa Twin comes with.  But it now has taken a more travel-oriented route.  Honda says this model is made to allow you to cross continents in comfort.

A wider fairing and adjustable windscreen should reduce wind blast and fatigue.  To get you there, the ATAS has a larger fuel tank than its sibling.  With about 6.5 gallons of fuel at a claimed 50 MPG, you could get a range of 320 miles or so.  With that kind of range, you’ll likely want to stop before the fuel runs dry.

Heated grips are now standard.  Honda has also added an accessory socket for those must-have gadgets.

The ATAS boasts more technology.  New three-stage “cornering lights” have been added.  Honda claims that they create a wider beam of light as the bike is leaned.

In addition, Showa Electronically Equipped Ride Adjustment (EERA) is available as an option.  The Showa EERA is a semi-active suspension that adjusts damping relative to the setting chosen.  EERA electronically adjusts the suspension in accordance with the bike’s four pre-set modes (Soft, Mid, Hard and, Off-Road).  For those that want to customize the suspension settings, it also has two user-adjustable modes.

The Showa EERA system also has three rear preload pre-sets.  It utilizes the six-axis IMU and balance-free valve technology in the front forks to provide optimal suspension for the terrain.  As with the damping control, there is a User mode which offers 24 clicks of preload adjustment to suit rider preference.

In light of its travel orientation, the ATAS now comes with spoked wheels and tubeless tires.  That should make on the road changes faster and easier.

Expect the new Africa Twins to start showing up in dealerships by March 2020.

Note that the above specs are for European models as Honda has yet to release the US version specs in full.  By the time you read this, Honda may have provided full US specs.  Check Honda’s website for further details.