As the name implies, this is a bike built along the same lines as the Adventure R: An upgraded adventure machine, but instead of building for aggressive off-road use, KTM’s self-proclaimed design intention was to make “the machine that will easily cross continents in order to ride to the start line of a rally.” KTM calls it “the most travel capable rally bike.” The idea seems to be not just the proverbial race bike with lights, but a race bike with lights and a luggage rack.

You’d think that would be a pretty small market, and you’d be right. KTM is only making 500 units of the Adventure R Rally.

So how is this machine different from the 790 Adventure R? Suspension is the main difference; the Adventure R Rally gets the WP XPLOR PRO 7548 fork, which uses a new cone-style valve design. KTM says this allows “almost limitless damping performance,” while still resisting bottoming out and maintaining comfort, with less harshness. KTM also says the settings that were before only changeable by tinkering with the shim stack are now adjustable from the outside of the suspension. In other words, it works better, and is easier to tinker with.

The new XPLOR PRO 7548 forks also offer 30 mm more travel, as does the matching WP XPLOR PRO 6746 shock in rear. This suspension was originally brought to market as an optional add-on for the 790 Adventure R, but is now available as a pre-packaged unit.

Of course, the new fork and shock are fully adjustable. One potential downside of the new suspension is a taller seat, at 910 mm. 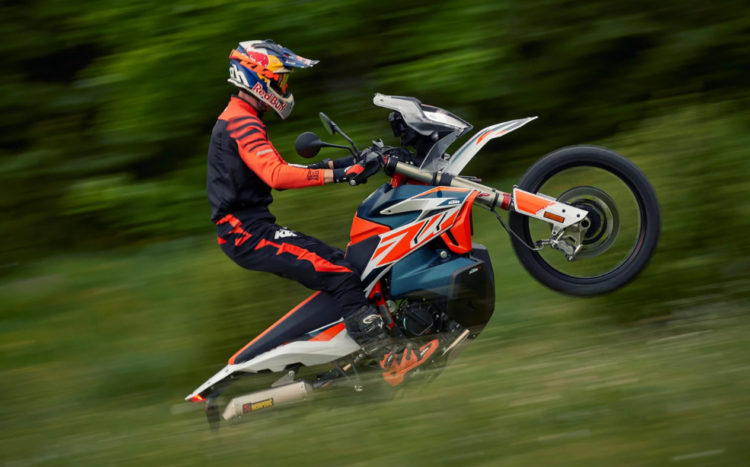 That bodywork is unique to the KTM 790 Adventure Rally R, as is the paint job. Photo: KTM

Along with the new suspension, KTM also includes an Akrapovic exhaust as standard on the 790 Adventure R Rally, as well as carbon-fiber tank guards and the Quickshifter+ (allowing up/down clutchless shifting). The 790 Adventure Rally R also has a different set of rims, which are more narrow for off-road performance, and run tubed tires instead of tubeless. The bike’s graphics and colours are unique as well. The seat is higher, and straight, and KTM also included rally-style footrests to improve the machine’s racing ergos.

KTM bigwig Hubert Trunkenpolz had this to say: “Quite simply, we’ve built the KTM 790 ADVENTURE R RALLY because we can! At KTM we continually try to push ourselves and the development of our products – this is the READY TO RACE way. We have the equipment at our disposal and we know how to make a truly special bike for our hardcore customers. With its Pro Components range, WP offers suspension close to the same level used by the Dakar-winning Red Bull KTM Factory Racing Rally team on the KTM 450 RALLY. The new KTM 790 ADVENTURE R RALLY is exactly as it says: A rally bike ready for any adventure.”

So there it is. No price tag yet, no availability yet, but if you want the hottest middleweight adventure bike in the world, KTM is claiming it’s built what you’re asking for.

Around the World on a Honda Monkey