Lightning is in fact the scariest thing on the road. It is even worse than a Toyota Corolla with a bowler’s hat on the rear parcel shelf. That’s in Australia and New Zealand – I’m afraid (sorry) that I don’t know the equivalent in other countries; but a bowler is quite different here down under than he, or more usually she, is in somewhere like the United States.

I was riding out bush once, far enough from the coast so that nothing interrupted the sweep of the great plain from horizon to flat horizon. But there was plenty going on in the sky, where an enormous thunderstorm was coming up from behind me. Out here you don’t usually have choices where to go – the road you’re on is it, so there was no way I could avoid the storm. And it was sweeping down on me so quickly that outrunning it wasn’t an option either.

As the purplish-black clouds flowed over the top of me and my BMW R 80 G/S (yes, the forward slash is correct), I was grateful that it was a dry thunderstorm. The dirt road I was on would quickly have become impassable if it had rained. But I wasn’t grateful for the solid-looking incandescent spears of lightning that were stabbing the dry pastureland all around. Out in flat country, lightning is unavoidable and inescapable – and possibly unsurvivable. Just remember, even if you’re not killed by a strike you will need CPR to re-start your heart.

Remember that lightning can reach 50,000 degrees Fahrenheit, which is hotter than the surface of the sun. But it is possible to survive a lightning strike – Roy Sullivan, a US Park Ranger was struck seven times – a world record – but eventually died from a self-administered bullet to the head.

I obviously did survive, and the heart starter in the pub in Hillston didn’t even touch the sides as I celebrated. I don’t know that I’ve ever been more scared.

When I got home I fired up the interwebs and started looking for advice that would be useful for a motorcyclist caught in such a storm. I found practically nothing. Lots of advice for you in you’re on foot, or in a car or even on a horse but as so often nobody had thought to specifically consider us riders.

“Being outside when lightning is present is not something to take lightly—ever,” says the US Centers for Disease Control and Prevention (CDC) website. “When thunder roars, go indoors [but stay away from concrete walls or floors, because lightning can travel through the rebar].” Which is all very well, but what if there is no indoors, outdoors? The CDC recommends crouching low with as little as possible of your body in contact with the ground, but that seems a little… passive to me. Isn’t there something a bit more… involving? 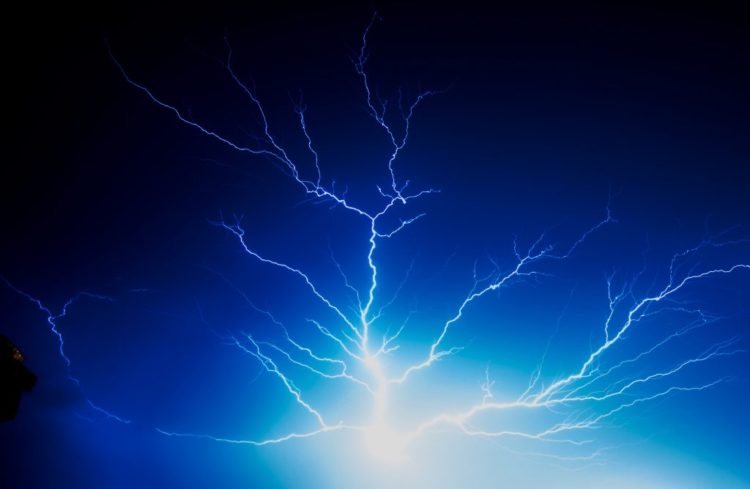 Well, from reading a variety of sources and extrapolating (from advice for bicyclist, for instance, who seem to be more important than motorcyclists) I’ve come up with a bit of an action plan.

When you encounter lightning while out riding, the first thing to do is to get away from your bike. It’s metal, and is therefore a target. The rubber tyres will not protect you. If you’re in really flat country lay it on its side, if possible in a ditch. The effect of a lightning strike on a motorcycle is exceeded in unpleasantness only by the effect of a strike on you.

Should there be shelter nearby, head for that for yourself – but not if it’s concrete, or if it’s next to a tall tree or pole. Stay away from anything tall or metal, even a wire fence. Find a ditch for yourself if you can and crouch down, but make it a dry ditch if you can. Water conducts electricity, and it’s worth remembering that most deaths from lightning are caused by electricity jumping from a struck object. Sheltering under a rock overhang or something similar, out of the rain, is a good idea.

Now here’s an interesting bit of advice. Keep your legs together; lightning can flash up one and down the other if they’re spread, and the effect on your reproductive equipment will probably not be welcome. I’d say keep your helmet on – lightning has a tendency to set your hair on fire – and if you’re wearing a long coat like a Drizabone, make sure it is in contact with the ground all around you. The lightning may flash along the line of the coat and its effect on you may be reduced. If you’re in a group, spread out but stay close enough so you can give anyone who is struck immediate CPR.

And finally, here’s another interesting one. Keep away from places where lightning has struck before. Contrary to the belief that lightning never strikes twice, it often does exactly that. Makes sense when you think about it.