“Twosies is funsies but nothing beats threes.” – Cabaret

Queenstown in New Zealand’s South Island is the perfect place to launch a motorcycle. There is not a single road out of the place that is not brilliant on a bike, with the Glenorchy road a contender for best motorcycle road anywhere on Earth.

So Yamaha had chosen well when it came to putting the company’s most recent daring departure from motorcycling’s norms in front of the assembled vipers of the motorcycling press. Keep in mind that the quality of the roads around Queenstown means that a poorly-handling motorcycle will show its failings very quickly; you need to be confident in the quality of your product before you let the press loose on it here. 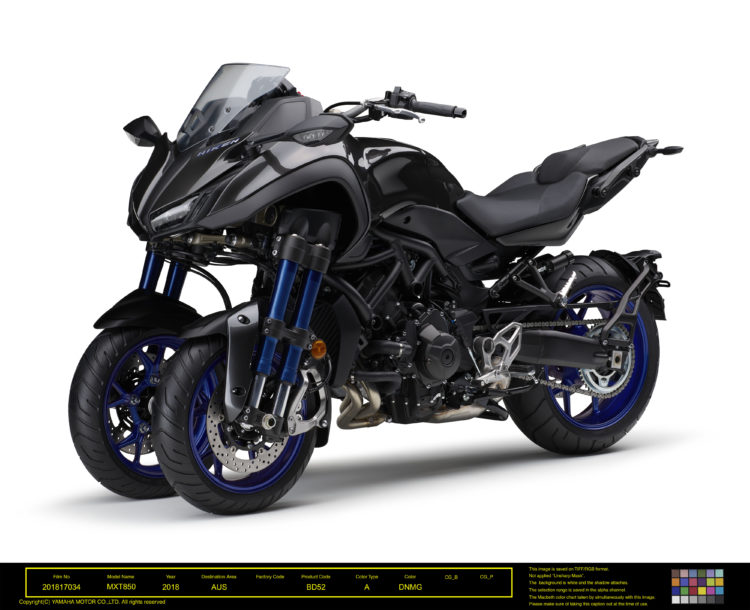 Somehow, the Niken looks hungry. For twisty roads, no doubt.

Let’s have a quick look at this three-wheeled prodigy before I start boasting about just how quick I was on the thing. I am not generally a member of the “the older I get the quicker I was” fraternity. In fact, while I’m still pretty slow I reckon I’m faster now than ever I was when in was younger; pain doesn’t matter so much to me now because I take medication for it every day… 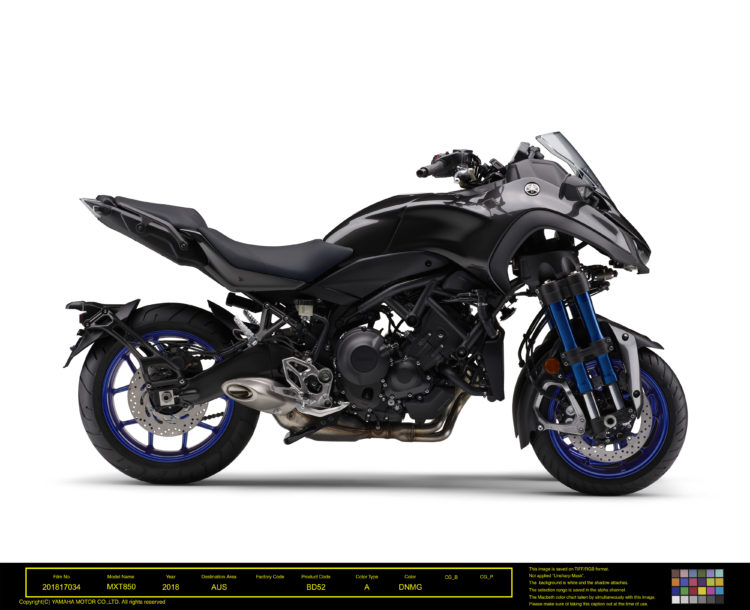 Seen from the side, the Niken could look just like any two-wheeled motorcycle.Yamaha’s engineers have put more than a decade of solid work into the complex but remarkably simple-looking LMW Ackerman Steering, which is the name for the arrangement of four fork tubes and the linkages connecting them. The 41mm front tubes add rigidity but are empty; the 43mm rear tubes contain springs as well as the damping mechanism.

The linkages and pivots ensure not only that the wheels lean individually but refines their movement to make sure that the pair of 15-inch radials with their single disc brake each maintain a maximum of contact patch. The Niken steers exactly like a traditional motorcycle, but offers significantly more grip at the front. It offers so much grip that I’m certain the rear would let go before the front if you really pushed the bike.

While the engine parts share dimensions, however, they are not identical. The gears, valves and some other parts are made of a more durable, high-strength steel alloy. This has intentionally made the crankshaft heavier to increase torque, which can lead to a very slight hesitation when the engine spins up. More torque, increased to 87.5Nm at 8500rpm, is also provided by refined fuel injection settings and a secondary gear ratio is increased from 45 to 47 teeth. That means the gears are taller, but ther responsiveness of the bike doesn’t seem to have suffered. 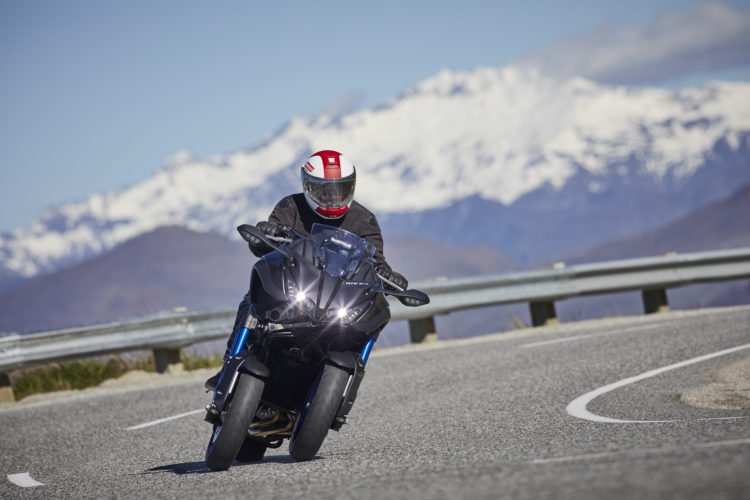 Cornering is outstanding, and you can lean a lot further than this.

Power is good, then, but not exceptional. The difference that the Niken offers is in grip and braking. Yamaha claims 40% more front-end grip “especially in corner-entry section… Braking is applied to both front wheels, even when leaning… [giving] freedom to brake later… [with] almost 20% extra stopping power” and the ability to open the throttle earlier. Trail braking is easy, the bike offers “higher stability on tip-in… [and] 50:50 weight distribution with rider… amazing ride quality… LMW Ackerman Steering brings natural cornering traceability.”

I’ve never missed traceability, but that may be because I don’t know what it is. I do know what front end grip is, and I’ve always wanted to have the nerve to delay my braking in corners so I understand what Yamaha is trying to do with the Niken. I’m also here to tell you that they have achieved it. The bike leans a little less than the two-wheelers to which it owes its power – it will tip over to 45 degrees – but that’s enough to get serious ‘hoo-wee’ moments as you power out of corners. 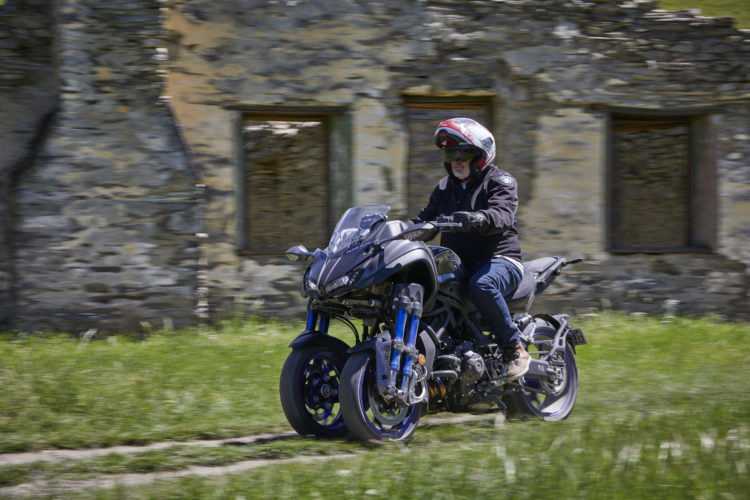 Gravel is no problem for the front end suspension; it eats it up.

On a Niken you will be able to out-corner your friends on sports bikes; I will just about guarantee it. But the platform has more potential than that. One obvious use, for which the 18.5 litre tank should be fine – Yamaha claims a 300km range – is as a touring bike. The comfort, stability and overall ease of use all point in that direction. Soon, Yamaha will be launching a GT version which will cater to travellers with panniers and a higher screen; the seat is already comfortable for rider and pillion alike. A large range of accessories will be available.

Will the Niken overcome its odd looks and find a home in your garage? You’ll never know unless you try one, especially in that corner you’ve never been game to tackle as fast as your friend on a Fireblade…