I’m moving across Russia at a reasonable pace.  My wife Vicki has rented a place by the sea in Scotland for the month of July.  My goal is to stay with her for a week – it’s good to have goals.

Today was epic riding. With temperatures in the seventies  I wore mesh armor all day – no polar suit – for the 630km ride.  The machine is running perfectly. Life is pretty great. 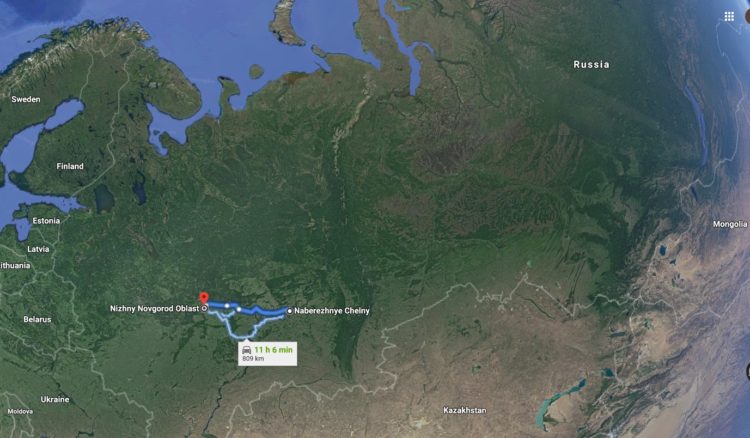 I booked two days at a brand new hotel for less than 20USD per night with breakfast included!  The hotel was indeed brand new albeit in a very run down district.  I’m telling myself,  “urban renewal” at its best and smiling ear to ear. 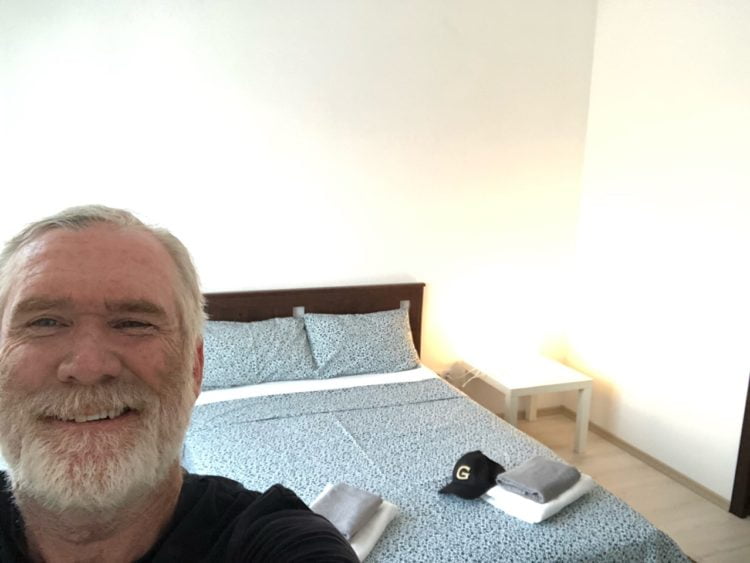 The White Room at my Nizhny Novgorod Hotel

Before dinner I explored the city atop the KLR.  There is a fort downtown – definitely a destination.

Dinner was a salad and spaghetti – delicious,  followed by a trip to a local bakery for some incredible dark chocolate rolls – sinfully rich. 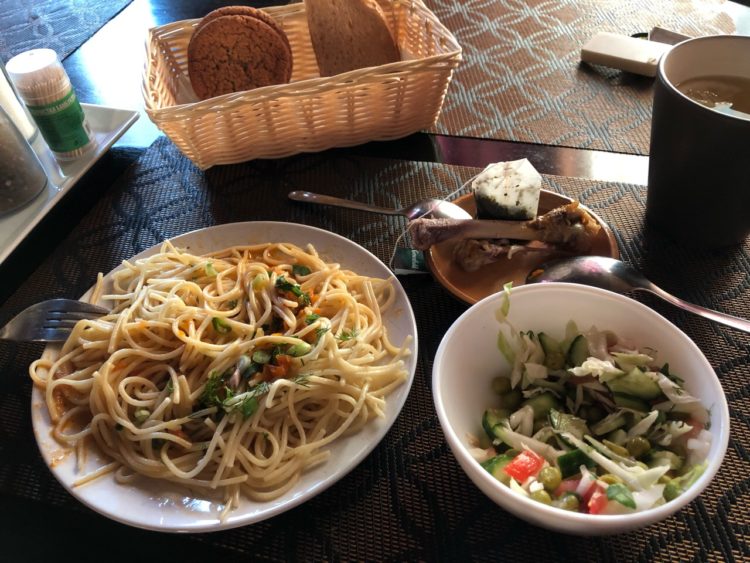 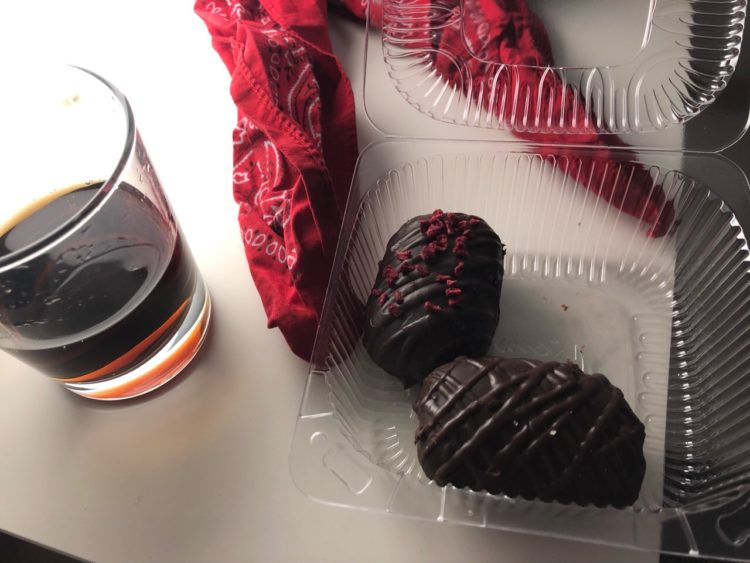 Back at the hotel I started daily bike maintenance which typically attracts attention. 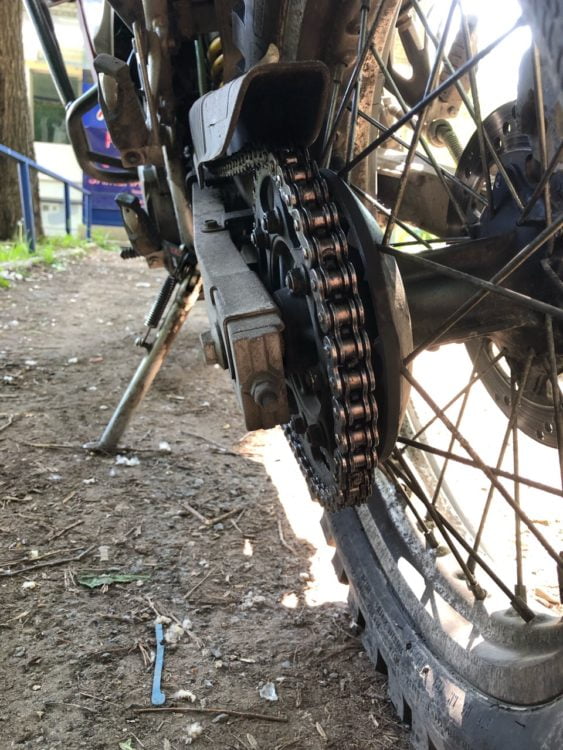 Let’s face it most riders like working on their machines.  Better still is watching someone else work.  Within 10 minutes I had a half dozen Russians gathered around watching me work.  Direct dialog wasn’t an option. These men were not google translate users.  Moreover, they’d definitely had several shots of Vodka throughout dinner.  They were remote from their homes working construction and staying in this hotel on a weekly basis.  Their project manager spoke English so he was busy translating for the rest. We had a nice visit with questions (through the bilingual project manager) ranging from, “Where is your wife?” and “Why does she let you do this?”, to “Why are you not riding a Harley Davidson?”. 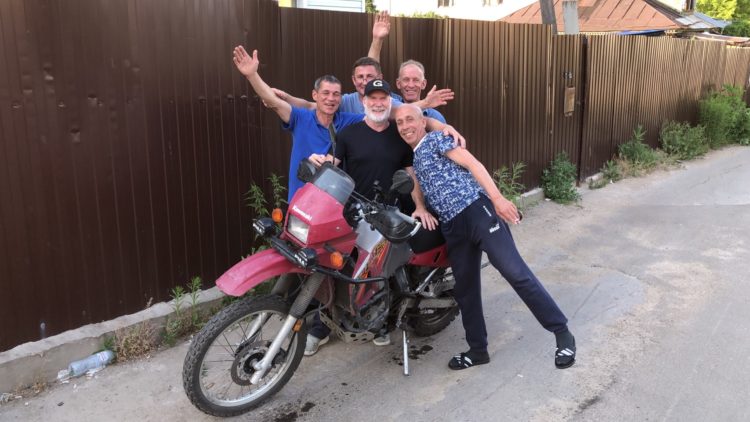 I showed them my “fork seal cleaning tool”, an amazing little thing that really works! 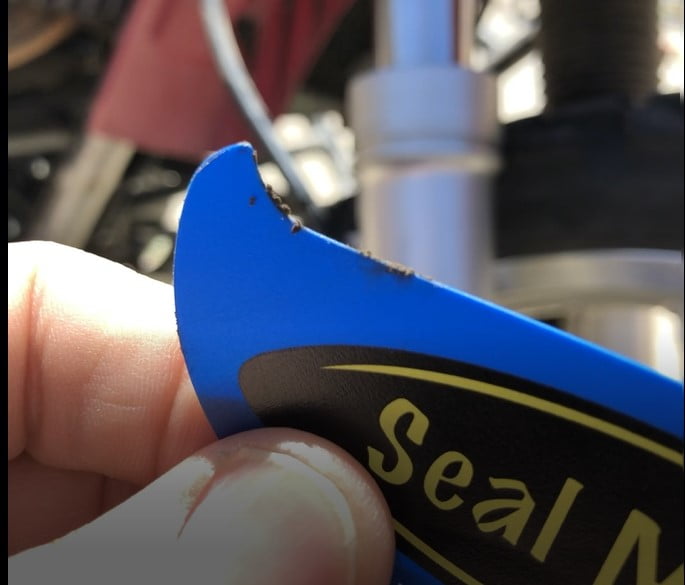 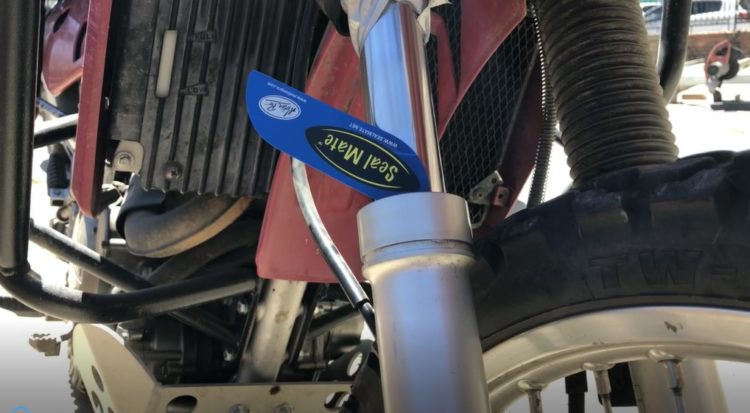 Next day I went to explore the Nizhny Novgorod Kremlin – a fort that stood guard against Kazan to the east in the 15th century.  The views from the fort were incredible.  The pictures are a distant second to reality but I hope these shots give you a taste for this beautifully restored/preserved historical place. 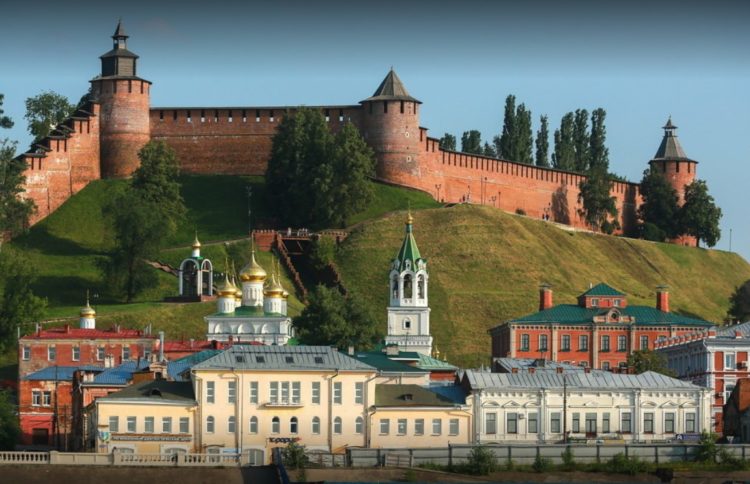 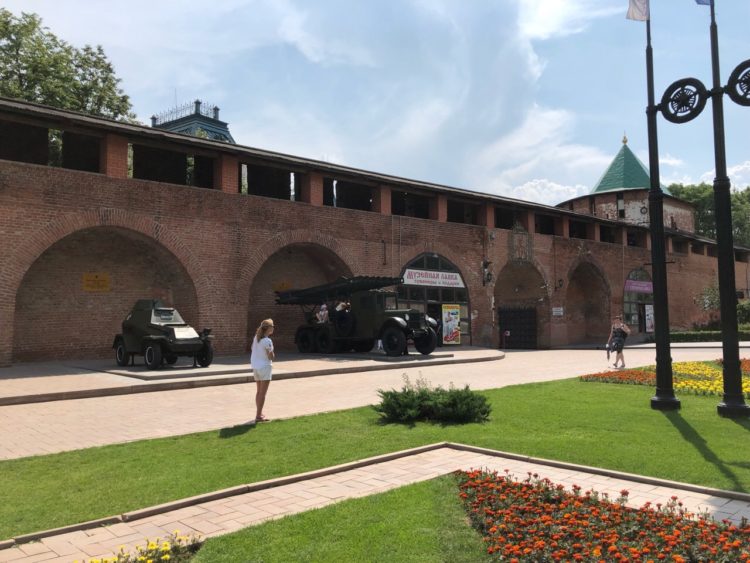 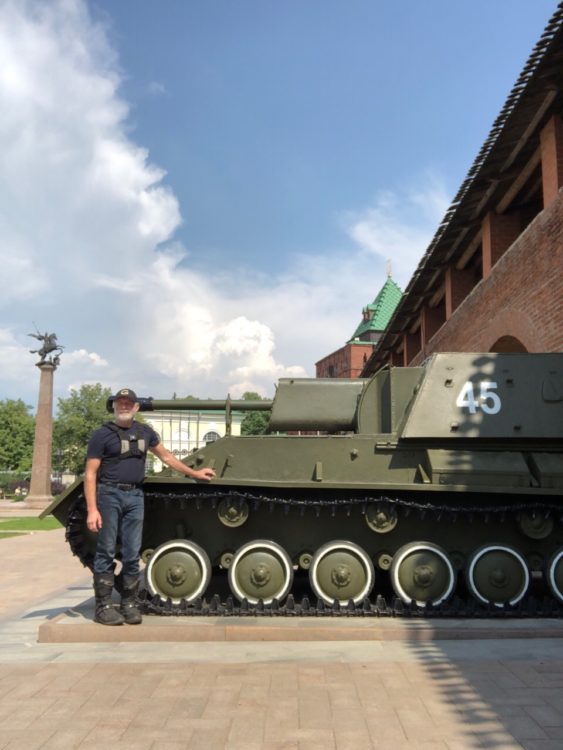 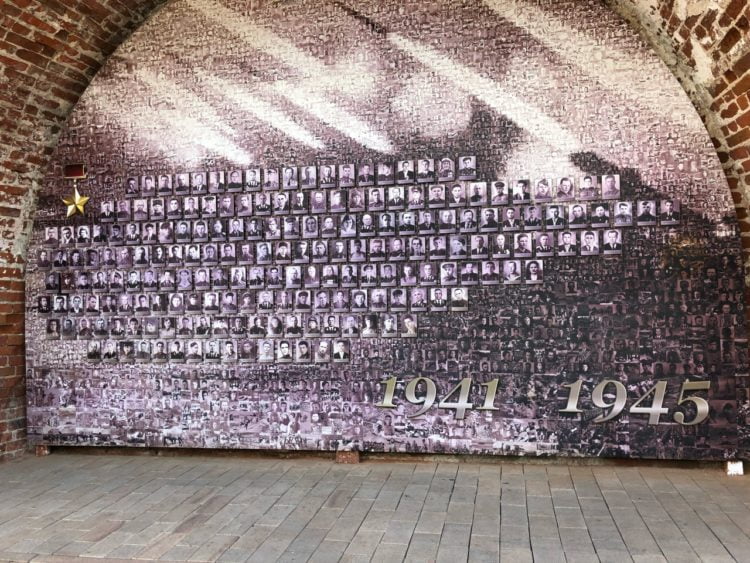 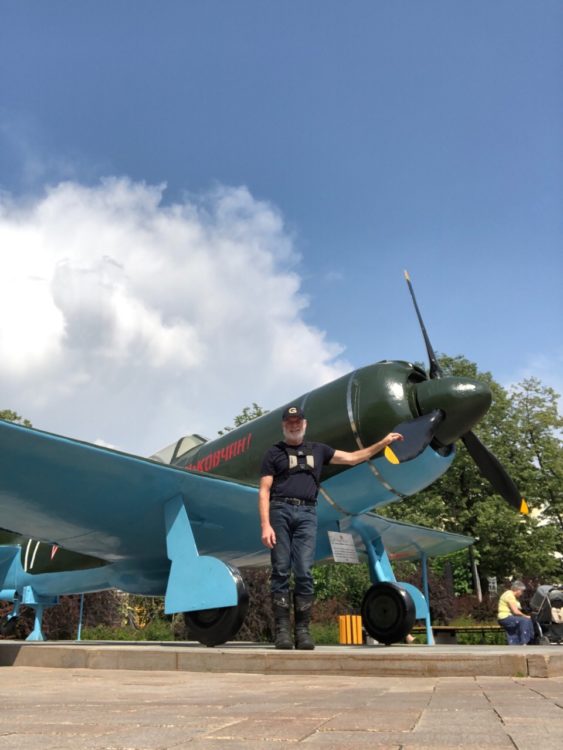 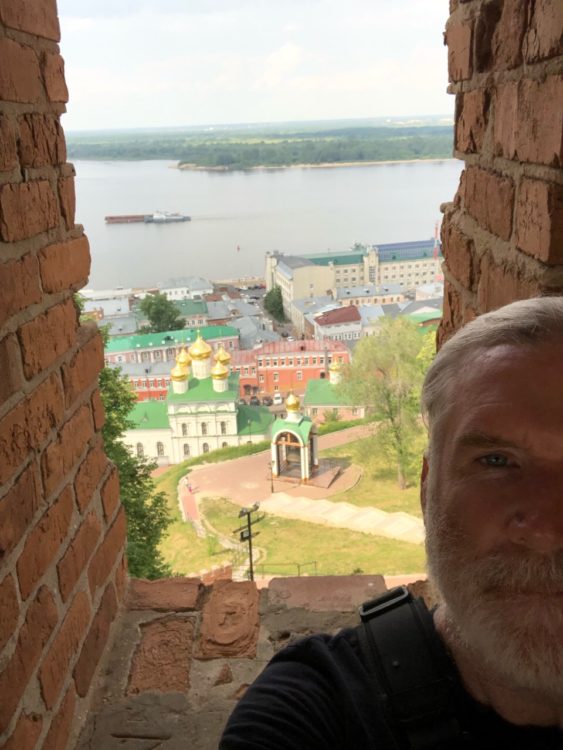 Stunning Views from the Kremlin 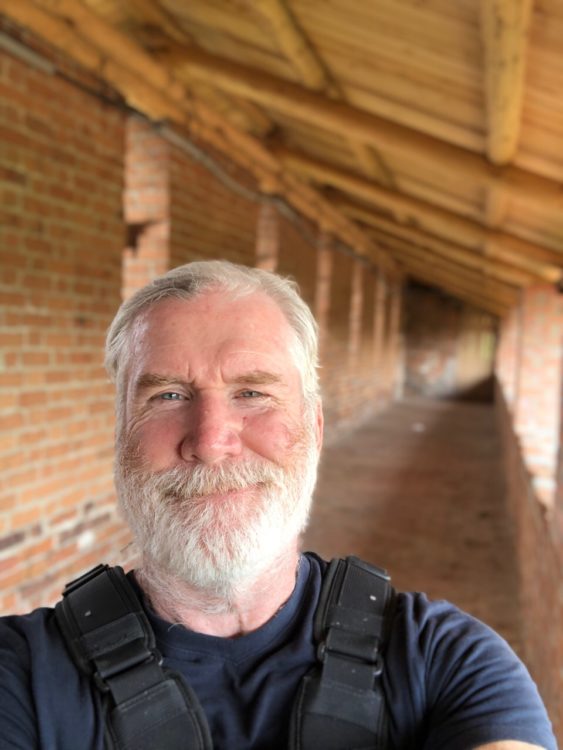 If these catwalks could talk…

A gently sloping walking mall funnels you down to the fort. 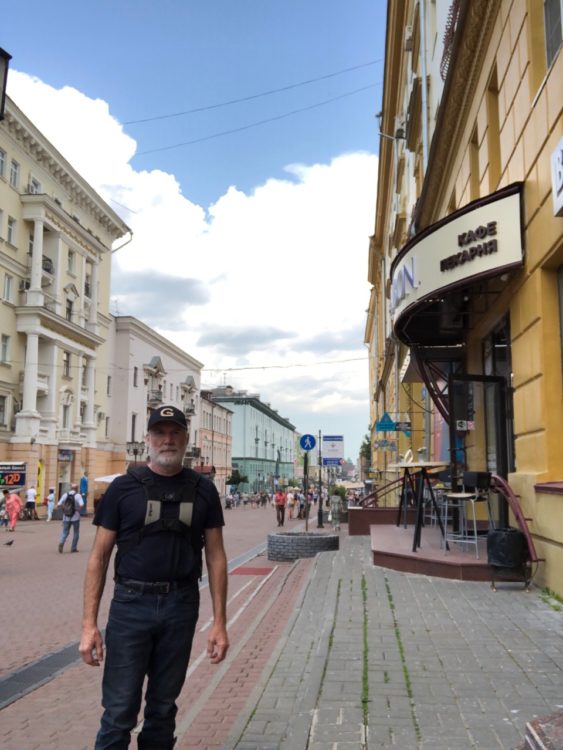 One of the best things about travelling on 2 wheels in cities is parking.  The industrial look of the KLR makes it invisible against most city scapes. 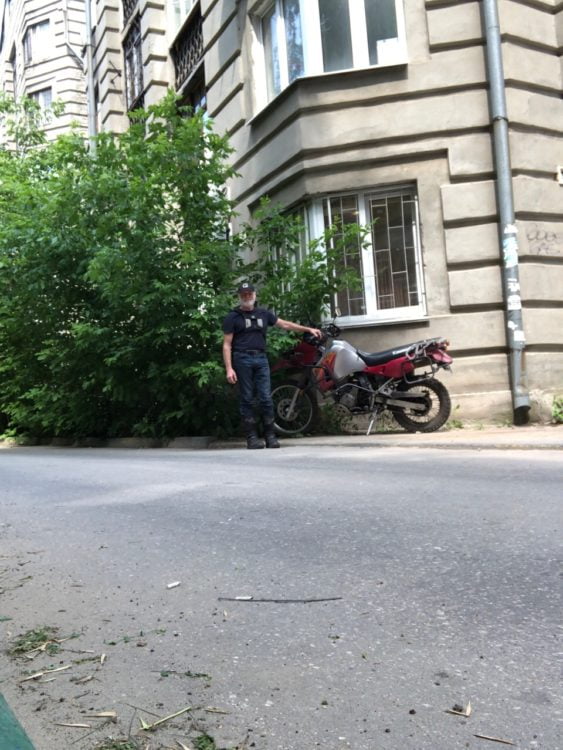 Parking the KLR – Narrow and Invisible 😉

After a long day of walking I sat next to one really good listener. 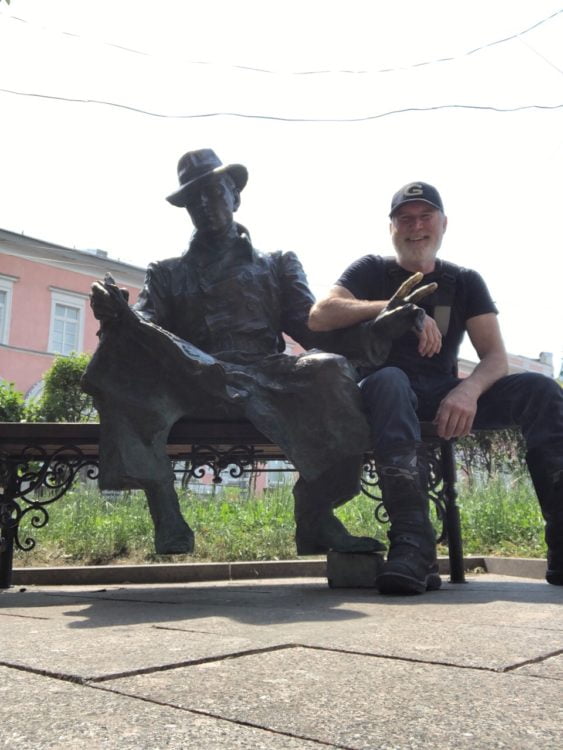 A cool guy and great listener…

One last clip of riding in the city and the Kremlin, then it’s on to Moscow.