Oregon Senator Peter Courtney (D-Salem) wants to close what he sees as a “loophole”.  Senate Bill 1503 addresses an Oregon Supreme Court decision handed down in November of 2019.

The bill and the case stem from the arrest of John Hedgpeth.  Mr. Hedgpeth was arrested in 2014 for suspicion of operating a motorcycle under the influence of alcohol.  He was initially stopped by police for operating a motorcycle without a helmet.  During the stop, police allegedly determined that Hedgpeth was also under the influence of alcohol.

At trial, prosecutors presented breathalyzer evidence.  It concluded that Hedgpeth’s blood alcohol content was 0.09 percent two hours after he was initially stopped.  He was then convicted.

Hedgpeth challenged his conviction arguing that the breathalyzer results weren’t proof that he was drunk at the time he was riding his motorcycle.  He claimed that the police’s test results weren’t obtained until two hours after he was stopped.  During that time, Hedgpeth claims that his body had time to absorb any alcohol he consumed and it was this delay that caused his blood alcohol content to exceed the legal limit.

Hedgpeth’s appeal resulted in his conviction being overturned.  The State of Oregon then filed a case with the Oregon Supreme court arguing that it’s “common knowledge” that blood alcohol levels dissipate over time.  Therefore, they argued that this common knowledge permits a factfinder (jury or judge) to reasonably infer that the defendant drove with a blood-alcohol level above the legal limit.  The factfinder merely had to consider the evidence that the defendant’s blood-alcohol level two hours later was still 0.09 percent, and there had been no consumption in the interim. 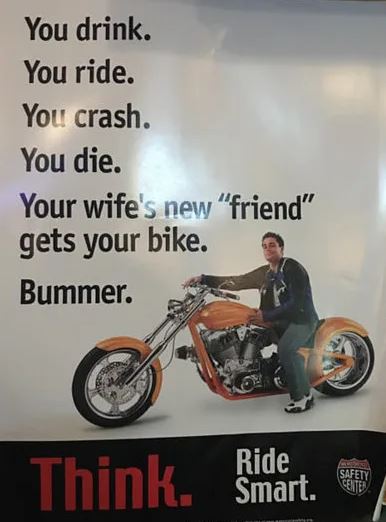 This “warning poster was seen in a Minnesota bar.  Photo credit: Pinterest

In its decision, the court noted that other states such as Colorado and Washington have laws that make it illegal to have a blood-alcohol level of 0.08 two hours after driving.   The court then noted that it was up to the legislature to establish a similar law in Oregon.

It’s this “loophole” that the Senate President, Peter Courtney is attempting to close.  His Bill makes it illegal to operate a vehicle with a blood-alcohol content of 0.08 or greater and for two hours thereafter.  Unfortunately or fortunately depending on your viewpoint, the Bill was sent to committee without a vote on March 8, 2020.

What do you think about this bill?  Should it be passed or not?  Let us know in the comments below.