The date is November 8th, 1929.  And, Clifford Amsbury on his Harley-Davidson is about to embark on a journey to save a man’s life with some needed serum.

On that date, a gold miner named Frank Sagar had been injured in a mine collapse, and his left leg was fractured.  Twelve hours later, Sagar made it to Ellensburg (Washington) General Hospital, but his condition was dire.

In those days, people with fractures often got an often deadly infection known as “gas gangrene.” Do yourself a favor and do not Google a picture of the condition unless you have a strong stomach.

Ultimately, Sagar’s broken leg became infected with gas gangrene.  His doctor, Dr. Willam A. Taylor, knew that Sagar would die if he did not receive a lifesaving treatment with a particular serum.  Sagar needed three tubes of “poly anaerobic anti-toxin” if he was to survive.

Unfortunately, there was none of the serum in Ellensburg.  The closest serum was located in a pharmacy in Seattle, more than 100 miles, and a mountain pass away. Rubenstein’s pharmacy had the serum and, even better, provided a motorcycle delivery service.  Rubenstein riders would pick up paper prescriptions and also deliver the actual medicine.  In fact, Rubenstein’s promoted the service in newspaper advertisements as early as 1912. 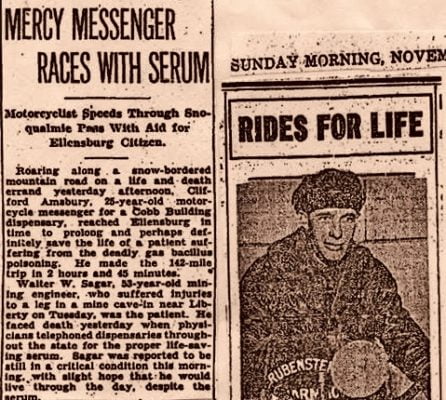 One of the few photos of Clifford Amsbury as shown in a local newspaper. Image credit: Kittitas County Historical Museum.

It is a good thing that Rubenstein’s had not only a motorcycle delivery service but also experienced riders, riders like Clifford Amsbury.  Because at the time, it was too stormy and too foggy to fly the lifesaving serum to Ellensburg.  So around 12:30 P.M. on November 8th, 1929, Cliff Amsbury jumped on his sidecar equipped Harley-Davidson and hit the road carrying those very dear tubes of serum.

Amsbury rides with the serum

The route that Amsbury took is not known.  But at the time, there was no interstate highway.  There was not yet a floating bridge across Lake Washington, which meant Amsbury likely went south to Dearborn, then east on Dearborn to Rainier, and then south on Rainier to Renton, or maybe south on Rainier to Empire Way and on to Renton. Interstate 90 did not yet exist, but there was the Sunset Highway, a precursor to what became U.S. Highway 10, and then I-90.

From Renton, the Sunset Highway would’ve been Amsbury’s likely route to Issaquah, and then up and over Snoqualmie Pass.  The Sunset Highway followed the same primary route as the current I-90, but it was a much cruder road 90 years ago.  Curvier, more narrow, and not even paved in some places, the Sunset Highway did not make for easy going.

But determined to make the trip quickly, Amsbury set off with some special permissions.  He was given a sheriff’s badge as a sort of free pass to speed and for permission to travel on any closed roads.  Law enforcement in Seattle phoned ahead to alert other officials that a rider on a critical lifesaving mission was coming.

Less than 3 hours later, sometime around 3:15 P.M., Amsbury’s Harley-Davidson could be heard approaching Ellensburg General Hospital.  Amsbury had made the 100+ mile trip over a curvy mountain pass in 2 hours and 45 minutes. 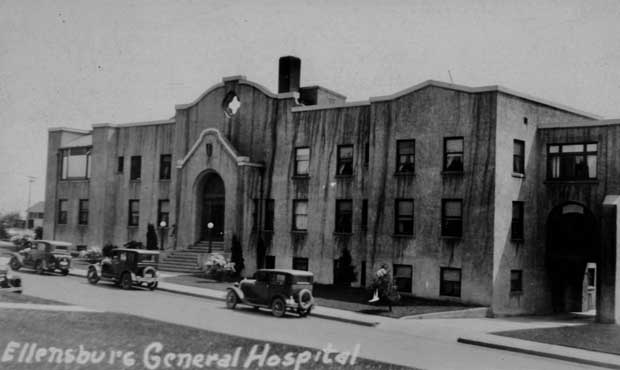 It is an astonishing accomplishment for a motorcycle and rider of the time.  Even today, that same journey takes only 45 minutes less on a modern interstate highway.

Tom Samuelsen, one of the founders of the Pacific Northwest Museum of Motorcycling, estimated that Amsbury might have been traveling between 50 and 70 MPH during his ride.

It was quite a journey and event, and to make it in that short a time was astounding.  A young guy in the prime of his life, to blast over there to save a dying miner. It’s really, really neat.”

After completing his mission, Amsbury didn’t dawdle around Ellensburg.  He saddled up and quickly returned to Seattle. There’s no record on how long it took him to return to his starting place.

Not so happy ending

Frank Sagar, the gas gangrene patient, initially responded to the serum.  But the infection took hold, and his leg had to be amputated.  Once again, Sagar’s condition improvided.  But unfortunately, Sagar, then 53 years old, took a turn for the worse.  Sager succumbed to his injury around 7:00 A.M. on Wednesday, November 20th.

He is buried in Holy Cross Cemetery, not far from the road that Amsbury had traveled to save Sagar’s life.  Unfortunately, Sagar’s attempted motorcycling rescuer, Cliff Amsbury, passed away just two years later.  He too died of an infection leaving behind a 21-year-old widow.

“It’s just a classic thing with a man, with humans, risking their life to save another, and then the tragedy of Clifford Amsbury dying such a short time later,” Samuelsen said. “I mean, everybody was hoping [for a better outcome], you know.”

Recently, Samuelsen and the Pacific Northwest Museum of Motorcycling partnered with the Kittitas County Historical Museum, and a group called the Vintage Motorcycle Enthusiasts to commemorate Cliff Amsbury and Frank Sagar.

Sagar’s grave is at Holy Cross Cemetery.  Up until recently, his grave had no marker.  Since neither man appears to have living relatives that anyone could track down, Samuelsen’s group has dedicated a brand new granite marker for Sagar. 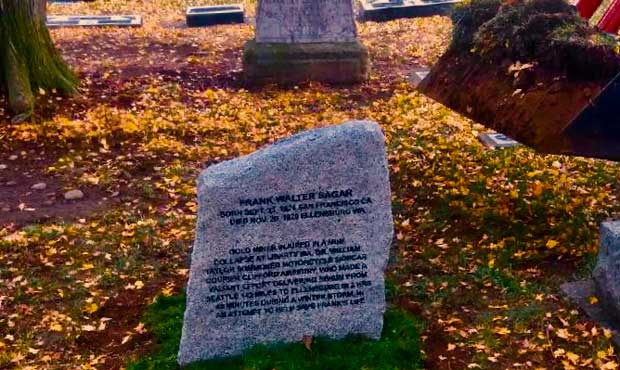 Thanks to the work of Samuelsen and his group, the world can remember the story of Frank Sagar and Cliff Amsbury’s attempt to save his life using a motorcycle over a lonely mountain pass.