There was a time when space and space travel occupied the minds of most Americans.  After all, it was a time when America was in a race with the Soviet Union.  Both countries scrambled to be the first to launch someone into space.

The Soviet Union won that race, but America was not far behind and did send its first person into space on May 5, 1961.  Alan B. Shepard was the astronaut aboard a Redstone rocket for that first flight.  Shepard was born in Derry, New Hampshire and his story is the genesis of this Oddities Uncovered.

It seems that a resident of the tiny town of Warren, NH (population 909) was stationed at Redstone Arsenal in Huntsville, Alabama.  The site was and still is a military garrison where the US Army Missile Command is located.

In 1969 an American landed on the moon, and America’s fascination with space was dwindling.  In 1970 Warren, New Hampshire resident Ted Asselin was stationed at Redstone Arsenal and noticed some Redstone rockets lying in a field.  He found out that the rockets were now obsolete and surplus.

Asselin thought of the children who were now not as interested in the space program.  He reasoned that if children could see the real thing, it might once again spark their interest.

Getting a Redstone Rocket

Checking with the Army at Redstone Arsenal, he was informed that he could have one of the Redstone rockets provided that the Army would not bear any cost for preparing or transporting it.

He decided to ask the Town of Warren if they would accept it, and if they did, he would bear the costs of getting it back to Warren.  In 1971 the town agreed and Asselin began the trek to Alabama to pick up the Redstone rocket. 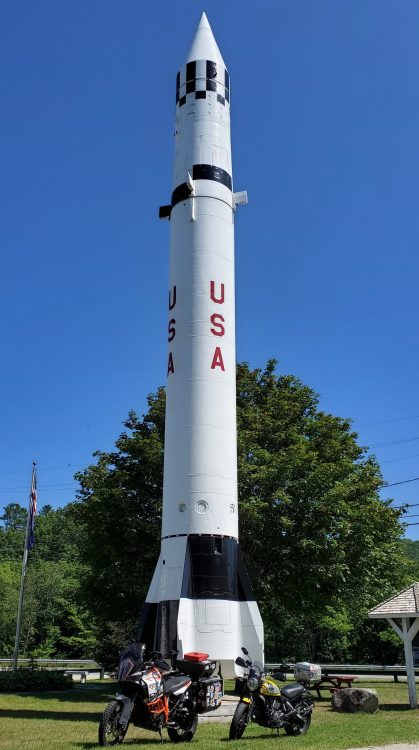 Our bikes in front of an actual Redstone rocket. The rocket is responsible for launching astronauts Alan B. Shepard and Virgil “Gus” Grissom into space. Photo credit: Kim Botan

The trek to New Hampshire

After borrowing a semi-tractor and a 60-foot trailer from a friend, Asselin arrived at the arsenal to pick up the rocket.  Handing the arsenal post engineers a check for loading the rocket, Asselin began the trek back to New Hampshire.

Things did not go as smoothly as planned, however.  The loaded rocket was an oversize load and Asselin did not know permits would be required.  In Ohio, he was stopped and had to pay a stiff fine to get the rocket moving once again.

The semi-tractor broke down on Main Street in Concord, New Hampshire, and the rocket had to be towed to the State House for its presentation to New Hampshire.

Underway again, the semi-tractor and trailer headed towards Warren.  A welcoming committee awaited the rocket’s arrival and a lookout had been placed to let the committee know of the rocket’s imminent arrival. 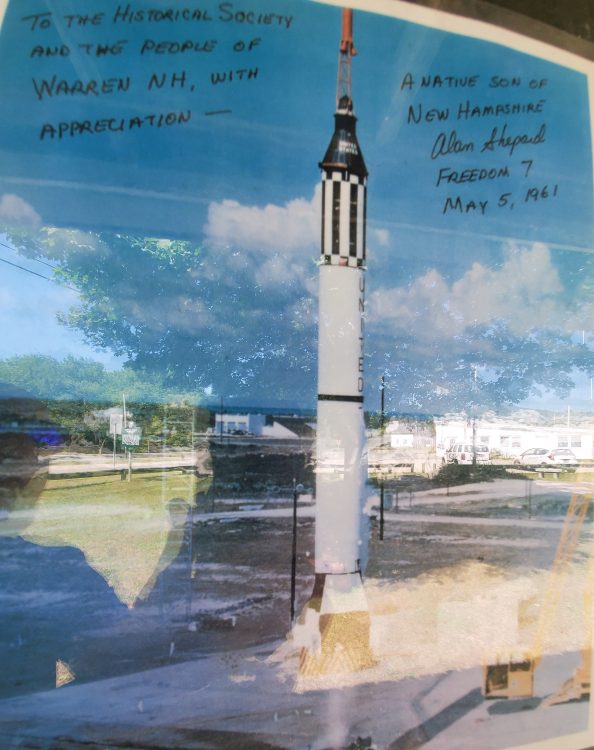 Astronaut Alan B. Shepard signed this photo of the Redstone Rocket located in Warren, New Hampshire. This picture is of the actual rocket that Shepard rode into space on May 5, 1961.  Photo credit: Mike Botan

The committee was informed that the rocket was nearby and the committee members jumped into their vehicles to greet the rocket.  They were highly surprised when they found out that the Redstone rocket sighting was not the rocket, but a local septic tank pumper.

Asselin knew at that point that he had made the right decision to bring the Redstone rocket to Warren.  If people didn’t know the difference between a septic truck and a Redstone rocket, he had indeed been right to bring it to Warren.

Ultimately, the 8-ton rocket was secured by placing it atop an eight-foot deep foundation buried into the ground.  The foundation contained five I-beams.  The rocket was then lifted upright and bolted to the I-beam pillars.

Finally, the rocket was dedicated on Old Home Day, July 4, 1971, by the then Governor, Walter Peterson.

To visit the Redstone rocket

The rocket now stands in a small park near the Warren Historical Society building.  You can visit the rocket for free and can find it at 112 Water Street, Warren, New Hampshire.

If you visit Warren, it is the only town in America with a real Redstone rocket.  There is a replica of the Redstone rocket with a Mercury capsule at the McAuliffe-Shepard Discovery Center in Concord, New Hampshire.  But that rocket and capsule are merely replicas.