Is there such a thing as perfect off-road motorcycles for women, and how do we get more gals to ride the trails?

Having gotten unexpectedly stuck back home for an undefined period of time due to the COVID-19 crisis, I’ve been trying to find ways to make myself useful somehow. One of them, it turns out, is helping other women connect and learn to ride off-road. Initially, I hadn’t expected there would be a lot of interest in off-road riding among Lithuanian women, simply because there are so few of us out here. However, when my friend Jurga invited me to help organize an off-road weekend for the gals back home last fall, I realized I was wrong. Dead wrong. Jurga and I expected some five or six women to turn up – after all, Lithuania is a tiny country with three million inhabitants, only a handful of people ride, and only a handful of them are women who want to get off the road.

We got over a hundred entries, and what was supposed to be just one off-road training weekend became several. 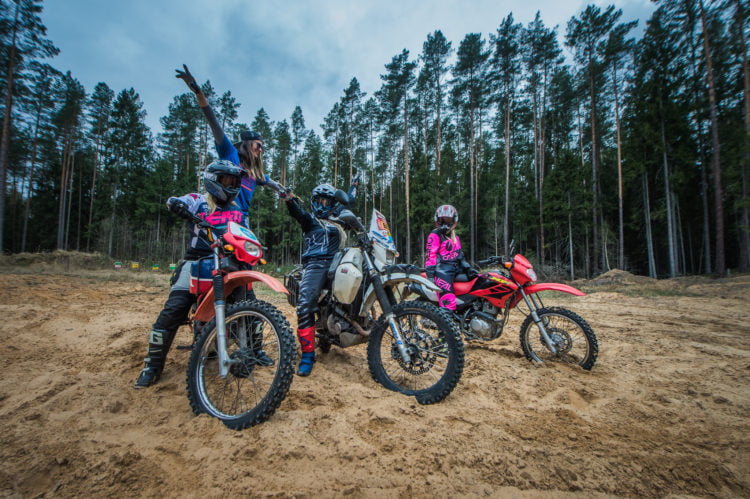 Over the winter, I traveled and lead tours in South America, while Jurga was busy taking the newly minted female off-road riders out on the trails, rain or snow. Now, as I got back home and got trapped due to lockdown, we revived the idea. Since large gatherings aren’t allowed, and we obviously wouldn’t want anyone to risk injury, we’re just doing short, half-day rides in a small sand quarry nearby. That way, the gals can try out Jurga’s little off-road bikes, and we can help them figure out sand. 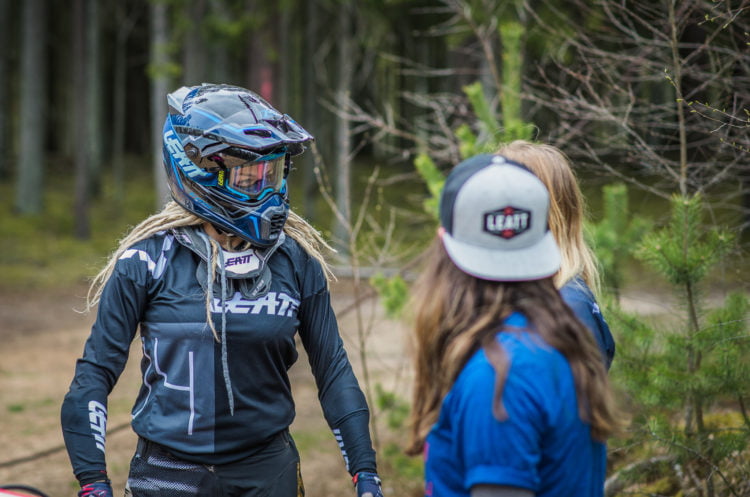 So, how do women get into riding off-road? It turns out, the recipe is very simple. Here’s what you’ll need to get your female riding buddy off the tarmac:

The thing is, learning is a lot more effective when it’s positive. I’ve seen my fair share of expert-y ADV and off-road guys who think yelling will make me go faster; it never has. Us gals like to feel safe, encouraged, and supported in our efforts to tackle mud or sand, so the more patient and kind the coach is, the more chances we’ll be flying across the TAT or TET trails in no time. 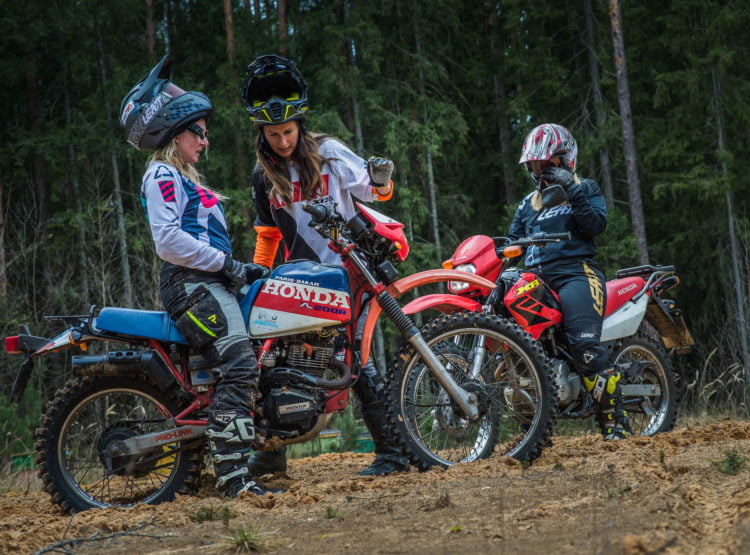 Learning to master a motorcycle off-road is stressful enough; there’s no need to add to that stress by being impatient or arrogant. Nobody was born knowing how to ride sand – except maybe Laia Sanz – so let’s just all stick together and help each other out. 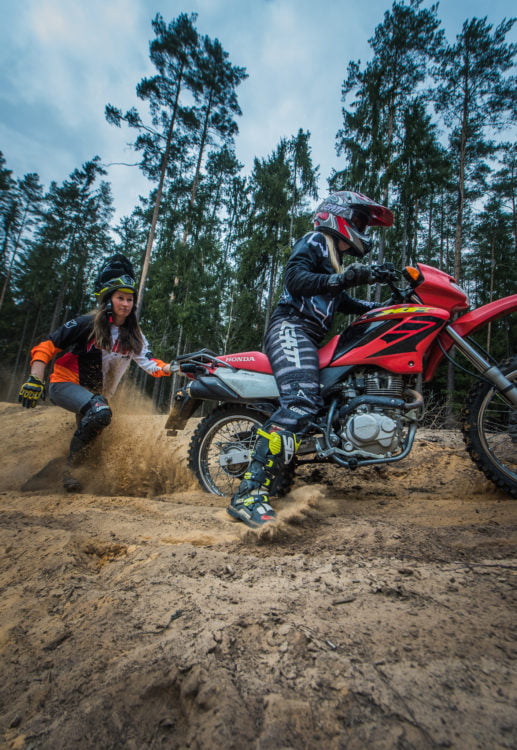 Women love to do fun things, but those fun things need to be achievable and somewhat manageable. As an example, plenty of people try things like surfing, paddleboarding, kayaking, hiking, ziplining, and so on simply because it’s fun and because it doesn’t seem like a huge deal to get started. Motorcycling, on the other hand, is still seen as something hard, difficult, and exclusive. The reality is, though, learning to ride a motorcycle, or learning to ride it off-road isn’t rocket science. You don’t need a special talent, a ton of muscles, or some natural ability to learn to ride trails. What you do need, however, is to see off-road riding as something attractive, something fun, something active and adventurous. Just like surfing or hiking, but better.

If motorcycle riding in general and off-road riding specifically stopped being seen as this tough, hard to master, dangerous, and exclusive thing, maybe we’d have a lot more new riders out there period, not just when it comes to the female market.

Not smaller capacity motorcycles, mind you, although when learning to ride off-road for the first time ever, you don’t really need anything above 250cc; but simply, smaller. Lower. More maneuvrable for women riders who are often shorter than their male counterparts. There’s absolutely no question whether women can or want to ride large ADV bikes; they do, just look at Jocelin Snow or Taye Perry. That’s not the point. The point is that when they’re first starting out, it’s simply much easier and a lot less intimidating to learn on a lower, smaller, lighter motorcycle. 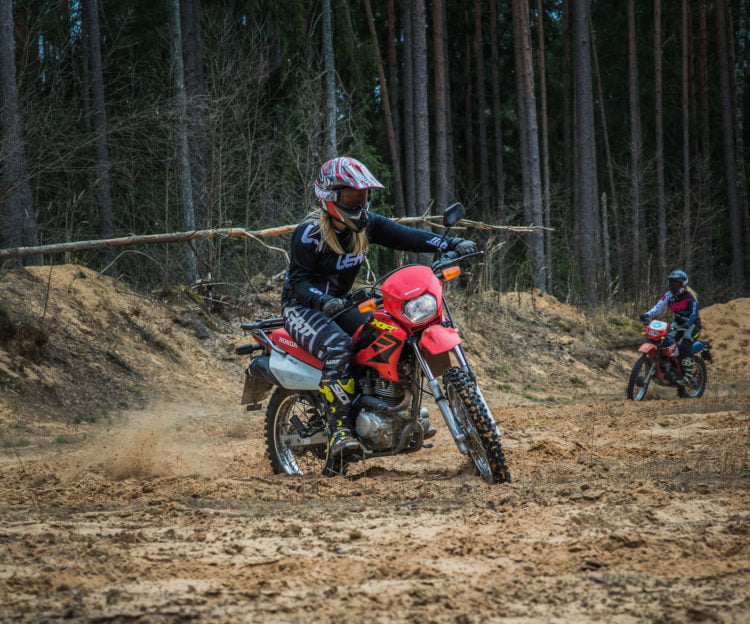 It’s not about having special “lady bikes”, it’s about the fact that on average, men happen to have longer legs. Remembering my own beginnings seven years ago, I learned to ride on a 150cc motorcycle and have covered thousands of miles, three continents, and several rally races since. However, if that first ride had been on a 1200cc beast? Chances are, I would be kayaking around the world instead.

When it comes to off-road motorcycles for women and getting female riders off the road, it’s not about special treatment, special bikes, or pink helmets. It’s about camaraderie, support, fun, and light, lowered bikes that can be thrown around easily even for complete beginners.