Four teens in Hampden, Massachusetts, were fined $750 each by the Massachusetts Environmental Police while riding on their own property. The teens were riding on land owned by the parents of one of the boys, with the parents’ permission, when the environmental police arrived and questioned them for two and a half hours. In the end, each teen received a $250 fine for operating an unregistered recreational vehicle, and a $500 fine for the operation of a recreational vehicle without a safety certification.

Speaking to 22News, Melanie Beck said her son and three friends were riding around her wooded yard, with her permission, when Massachusetts Environmental Police arrived and questioned the boys before handing out the fines. Beck wondered why the boys were not given a warning instead of a fine, considering the laws that they broke are apparently not well known in the area. She says other parents in the area have taken to social media to express their displeasure with the fines. 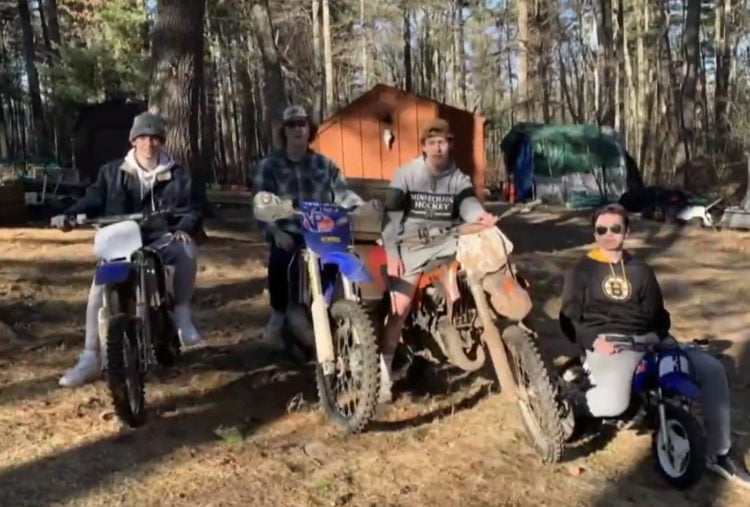 Hampden teens after being fined while riding on their own property. Credit: wwlp.com

One of the teens told 22News that they were just trying to have fun, in contrast to other teens “doing drugs and vaping” instead of participating in outdoor activities.

Earlier in February, 22News reported that ATV and dirt bike riders riding on city streets have been an ongoing issue in nearby Springfield, Massachusetts, saying that they had received multiple viewer complaints about the illegal activity. Police there have used undercover cars, motorcycles, and cameras to attempt to stop the problem, and have asked the public to keep an eye out for where the riders might be storing their vehicles.