Many of us have learned the hard way that having a good protective case for your phone is very, very important.  That group includes me.  I got my lesson carrying my phone in an “X” type mount while riding up to our dirt mountain road to our home.  The road is full of ruts, potholes, and debris capable of shaking a phone off of you and your bike.  And the road did its job.

Traveling up the road at a speed that may or may not have been legal, my phone and its “protective case” flew out of the X-mount.  Unfortunately, it wasn’t until I arrived home that I noticed that my phone had departed the X mount and my bike.  Heading back down the road, I found my phone in its death throes, its glass display a mangled mess.  Lesson learned. 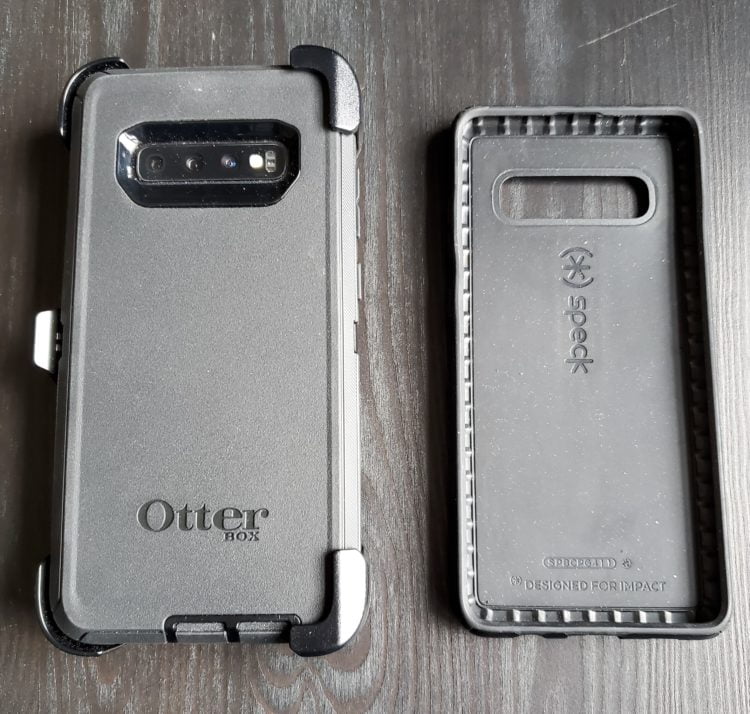 Now, a phone falling off a bike at speed certainly is an extreme test.  But it made me think that I needed a more secure way to mount my phone to the bike (now implemented) and a more rugged case.  Enter the OtterBox Defender Series Screenless Edition protective case for the Samsung S10+.  It’s a four-part protective case that is large, rugged, grippy, and secure.  And it’s those traits that give the OtterBox Defender both good and not so good characteristics. 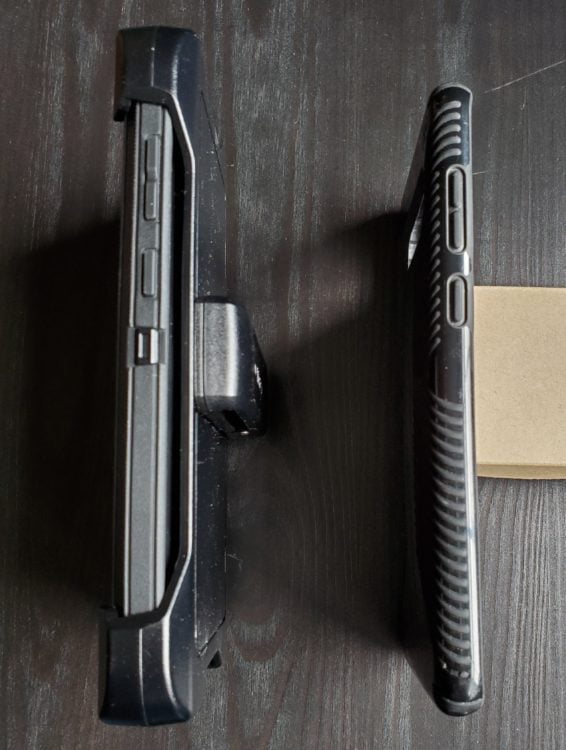 You can see that the OtterBox case is much larger and more robust than a “standard” one-piece phone case. Photo credit: Mike Botan

The rubber has a slightly spongy feel.  It feels like it would help attenuate shocks as intended.  It’s also very easy to grip.  If your hands are cold and/or wet, the case grips nicely.  You don’t get that slippery feel you may get with a solid “hard” cover.

There are also two synthetic rubber port covers, one for the USB 3 connector and one for the earphone port.  OtterBox says that the rubber covers keep dirt and dust out of the ports, which is a nice feature if you have the phone in the open and are in less than desirable conditions.  The ports are also accessible while in the holster.  That’s a nice touch.

That said, OtterBox makes no claims that the covers are waterproof.  They may provide some level of water protection, but if OtterBox is not claiming any waterproof protection levels,  I wouldn’t depend on it for keeping your phone’s ports water-free.

The case also includes a fourth part, which is a polycarbonate holster that has an attached belt clip.  It surrounds the phone and holds it securely with a clip that provides an audible “click” when the phone is securely inserted.  The holster’s belt clip also rotates and has 12 preset detents.   That allows you to position the phone in several different positions best suited for your preferences.  I found that the most comfortable position was horizontally due to the size of the phone and case.  It also put the insert/release clip right at the top of the holster and easy to access. 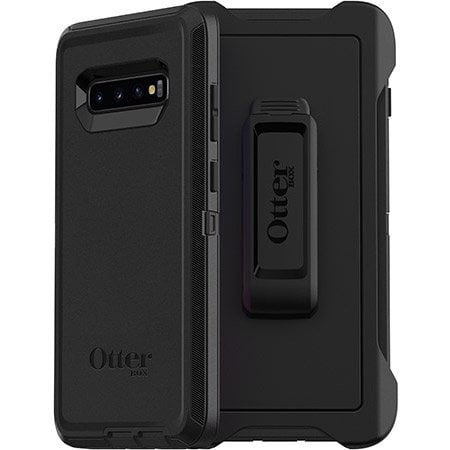 If the phone is correctly installed in the holster, the phone will stay where you put it, no matter the shaking/vibration from the road.  That gives you a secure feeling, especially with today’s more popular smartphones costing several hundred dollars.

As for the not so positive traits, there are only a couple, and they depend on your personal taste.  Most surround the size and configuration of the protective case.   As I said earlier, the OtterBox Defender is big and rugged.  While that is a positive trait in many ways, it’s also a negative one from the perspective of comfort and convenience.

When the phone is in the case, it has a substantial profile.  Even when not in the included holster, you will not want to put the phone into a pant pocket.  Its synthetic rubber surfaces that are so grippy while in your hand also grip the material in your pocket.  Getting the phone in and out is not as easy as with other hard cases.   But the case is designed to be used with the holster and so keeping the phone in your pocket may not be what you want to do anyway. 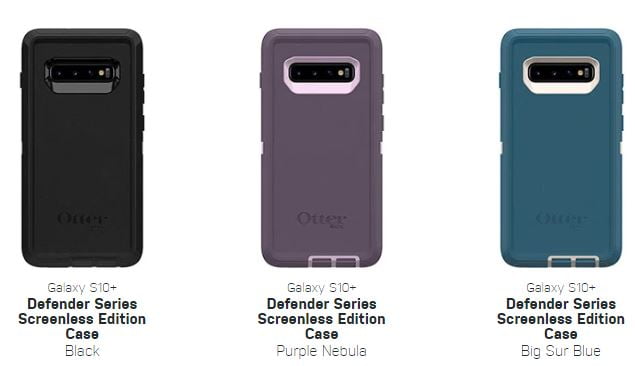 The second hiccup is its size overall.  It’s big, and you will feel it attached to you.  That can be a good thing or a bad thing, depending on your point of view.  Feeling it on, your person can lend a sense of security.  But because it makes itself known, it can also be a bit of a pain to have something on your person that is so bulky.

The final concern is the holster clip.  It works well, but it can interfere with mounting the phone to your bike.  You can always take the phone out of the holster and then mount it.  But if you do, you will have lost some of the protection the case provides.

If you plan to mount your phone to your bike, you will have to consider the case’s overall size and your ability to mount it to your ride of choice.  But if you hold protection above all else, the OtterBox Defender series of cases is an easy pick.  It can provide your phone with a level of protection that others don’t/can’t.

The OtterBox Defender Series Screenless Edition is available on Amazon for all the current and previous Samsung flagship phones and Apple iPhones in black, purple, and blue colors. It comes with a 1-year manufacturer’s warranty.