I am still reeling from the Lyndon Poskitt’s Team Races to Places Africa Eco Rally video (embedded below). Lyndon, who at the time was jockeying for a podium finish, and eventually finished third, realized a competitor was breaking the rules. Soon after Lyndon reported this to race organizers, his bike was tampered with. Incredibly, a hole was also drilled in the team van’s tire. This behavior crossed the line from bad sportsmanship to outright sabotage.

The video opens with Lyndon explaining that a competitor had been using tires that were not legal in the competition. Riders must use road legal tires.  Using motorcross or sand tires can give competitors a significant advantage in sandy stages when everyone else is riding with road legal tires.

The AFRICA ECO RACE Cross Country Rally is open to machines adapted to “Cross-Country” use and complying with the norms imposed by the French Highway Code and the FIM technical Regulations for Cross-Country Rallies.

So AER says that bikes must meet FIM Cross-Country Rallies World Championship regulations. Fédération Internationale de Motocyclisme (FIM) is the global governing body of motorcycle racing. According to FIM TECHNICAL RULES
CROSS-COUNTRY RALLIES 2019 (which I believe is the latest version of the technical regulations, emphasis added):

Only tyres normally available from commercial or retail sources are authorised. Modifying the tyre is not authorised. It is forbidden to treat tyres with chemicals, cut or groove them, use tyre warmers or any other means which may alter the shape, minimum Shore hardness, construction or other characteristics. The tyres shall appear on the tyre manufacturers range catalogue or tyre specification lists available to the general public.

They shall be approved according to UN Vehicle Regulation 75 Rev. 2 (2010) with the following specific features:

It is recommended that the tyres be used according to the European Tyre and Rim Technical Organisation (ETRTO) guidelines.

The E approval mark and number as defined by the UN Vehicle Regulation R75 must be present on both the front and rear tyre sidewalls. The DOT approval mark is also accepted. Any marking on the tyre reporting “FIM” approved or similar is forbidden for new production dates (from 2018).

All road-legal tires sold in Europe must contain an E mark. The DOT code is the US National Highway and Traffic Safety Administration’s equivalent.

Lyndon lodged a protest with the FIM which cost him 660 Euros. The FIM stewards agreed with his protest and he was refunded the money. He only has good things to say about the AER organizers and FIM stewards. 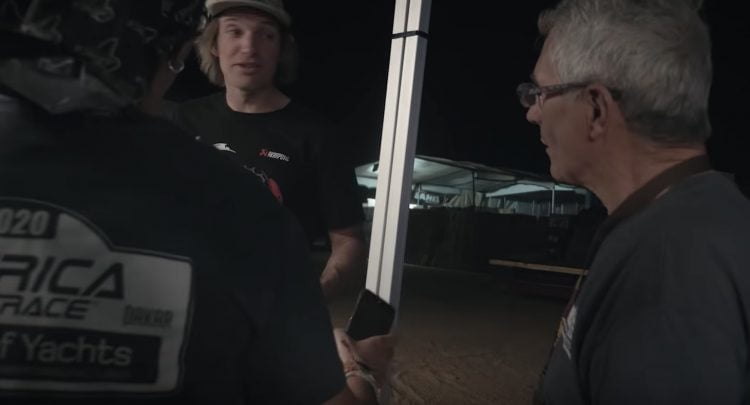 It was bad enough that a competitor had an unfair advantage, but things got much worse for  Lyndon. Someone tampered with his bike’s engine removing the sticker placed on it by race officials. This sticker confirms that the engine is race-legal. Lyndon’s engine was then reported to race officials. A non-stickered engine, ie not inspected or approved, would be a violation of race rules. This was a serious allegation and a penalty could have cost Lyndon his podium finish. The FIM officials inspected the bike and confirmed that its engine was legal and that there was evidence of sticker tampering. 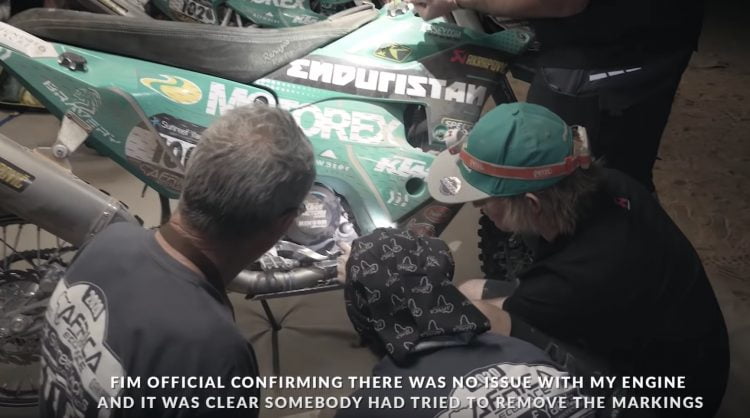 To make matters worse the team discovered their van had a hole drilled in the sidewall. The van was driven by Lyndon’s father Robin and he confirmed there was nothing wrong with the tire when they parked the van and drill marks were visible. 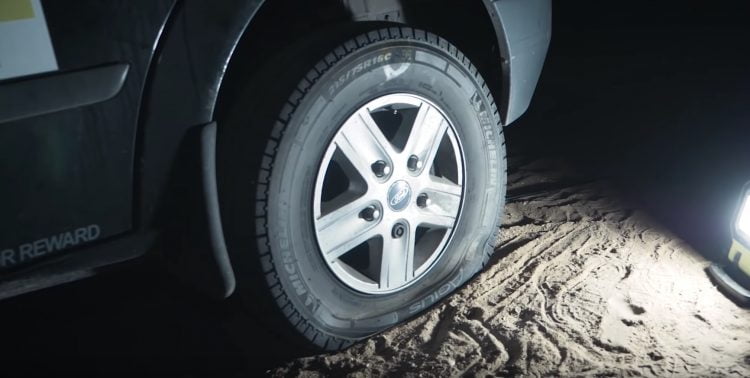 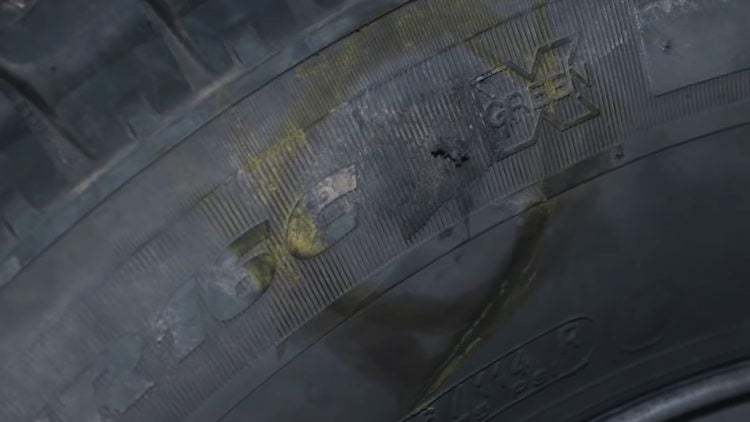 It is outrageous that one or more disgruntled competitors, or their support team, would repeatedly sabotage a competitor rather than win by being a better rider. Lyndon has nothing bad to say about the Africa Eco Race organizers or the FIM officials. They dealt with the issues fairly and they cannot police every corner of the bivouac 24/7. Walking around the bivouac with a drill is not suspicious and it would take maximum 20 seconds to drill through a sidewall, less time if you are an experienced saboteur. The good news is that Lyndon had a fantastic race and achieved his dream of reaching Dakar, Senegal and finished in third place.