Preparing to venture out into the brave new post-pandemic (or rather, controlled-pandemic?..) world this summer with plans to race Hellas Rally and Iberian Rally in the fall, I went over my gear to see what was still good, what needed fixing, and what needed discarding. And somewhere along the way, I realized I was deep into the rabbit hole called the Over-Optimization of Travel.

As I went through my tatty belongings, I realized my Garmin Montana was on its last legs, holding less and less data and frequently switching off at will, usually in the least desirable situations like city traffic or just before highway exits. I’d thrown the remnants of my camping gear away last year when racing gear took over my left pannier, and with plans to ride the TET and social distance as best as I could this year, I needed to get some new camping equipment. Apart from a broken buckle and a frayed strap here and there, all my Leatt racing and Klim riding gear, as well as the indestructible Mosko Moto luggage, still held well; the bags just needed a good wash, and I managed to replace a lost knee brace clasp with a rubber band.

Still, I needed to do a little shopping. Since The Rona has all but decimated more than 60% of my freelance work income, my budget had shrunk accordingly, so instead of looking into brands like Big Agnes and their $600 miracle tents, I headed straight for a Decathlon store and left with a $50 tent, $35 sleeping bag, and a $30 sleeping mattress (there was a discount for tiny inflatable pillows, so I managed to get one for $5, too). The stuff is as basic as can get, packs big, and weighs more than it should…but it works, I’ve got it packed away on my bike, it’s easy to unpack and set up, and it took zero minutes to research and about twenty minutes to purchase. Score. 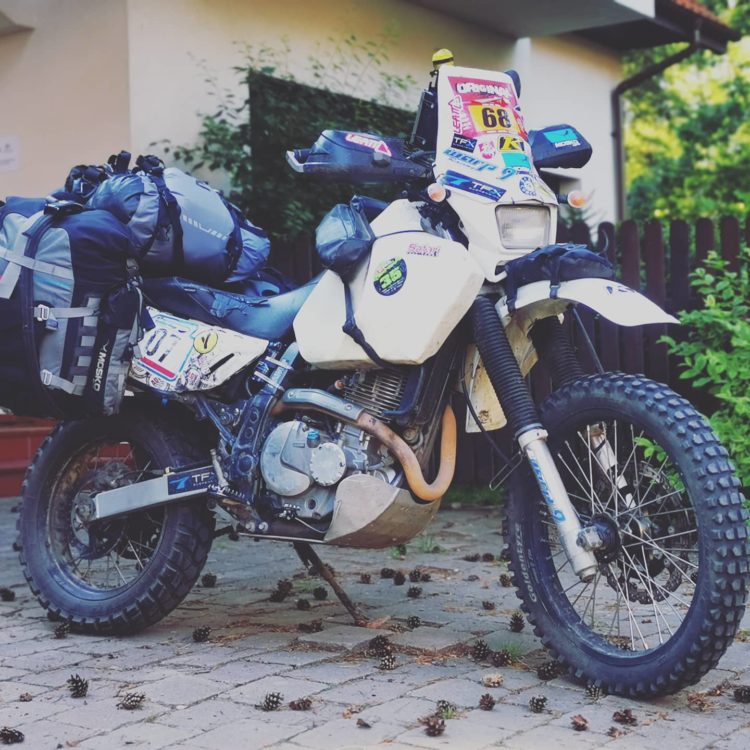 Motorcycle gadgets were a different story, however. Entering a motorcycle gear store in Warsaw, I had a simple mission of locating a waterproof bag for my newly acquired camping gear, 2.5 litres of motor oil, and a small can of chain lube. But alas, the store was full of shiny new things: a RAM phone mount and holder, which I could definitely use because the Montana might not last much longer; some more rok straps (who ever has too many rok straps? Who?); oh and look, a rugged waterproof phone case in case I do get the phone mount and actually use it – come to think of it, my DSRL camera would probably much prefer living in a bigger tank bag, too, wouldn’t it – and it’s probably time to get a SPOT if I’ll be riding dirt in the mountains alone… And just like that, a simple case of buying three items and walking out the store became a forty-minute exercise of overthinking, timewasting, and frustration.

While I managed to resist buying all the stuff that could potentially make my moto life easier but were not necessary to complete the European leg of my already directionless adventure, I realized that as riders, we tend to over-optimize travel as well. From route planning to strictly scheduling bike maintenance, from booking places in advance to obsessing over weather forecasts, we want to go on an adventure…and then try our best to avoid it with over-optimization. Designing your own GPX files and transferring them onto your GPS unit is a surer way to get places, but randomly stabbing a finger at some small regional road between A and B on the map works, too, as I found out trying to cross Poland and the Czech Republic on the less crowded backroads. Having pre-booked accommodation makes life easier, but camping at an empty campsite near a lake with a frog concert repertoire and unpolluted night skies reminds you why you’re living off the bike in the first place. Would a brand-new, tablet-size GPS unit that not only shows your route, ETA, distance, and speed, but also indicates altitude, predicts weather, plays your favourite tunes and wirelessly transmits positive affirmations straight into your helmet’s speakers as you ride trickier off-road sections (yes, I’ve just made that up, but you get the gist) be better than a half-dead Montana with the backup of scribbled notes? Yes, it would. Of course it would. It’s nice to have nice things. But not having them often makes for a more interesting ride. 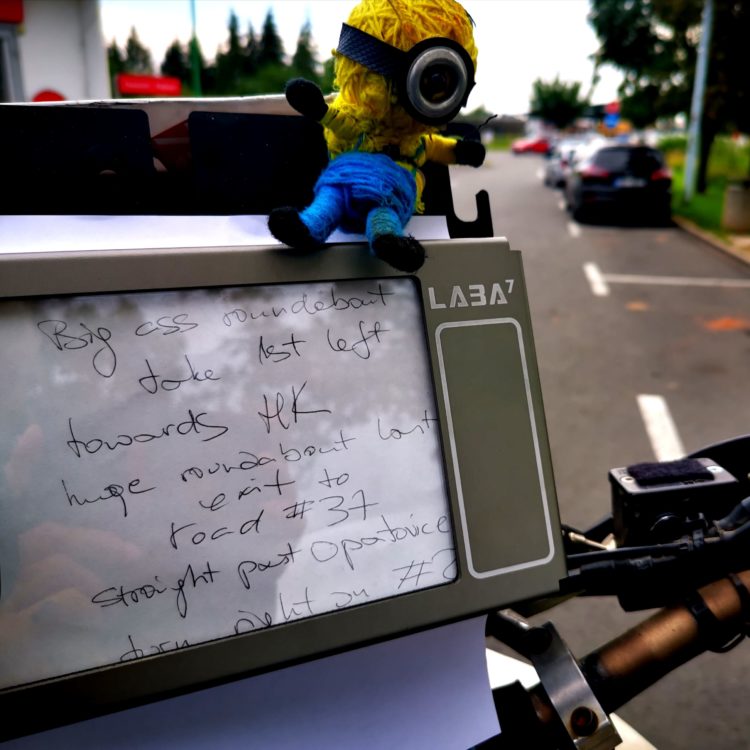 I’m by no means saying don’t buy the good stuff, especially if you can afford it. I am saying, however, that it’s good to stop obsessing over making the ride easier, more comfortable, more predictable; to be completely honest, my best experience riding Czech was exactly when aforementioned Montana unexpectedly went to sleep, and I needed to find my way to Kutna Hora, a small town in the middle of the country. There was no WiFi at the gas station available to check Google Maps on my phone, so I asked locals for help, wrote down some notes, and took off. Not only I found Kutna Hora, I also found I could still navigate using road signs, a general sense of direction, and a makeshift roadbook, and I took my surroundings in much better than when I simply follow a line on the GPS. 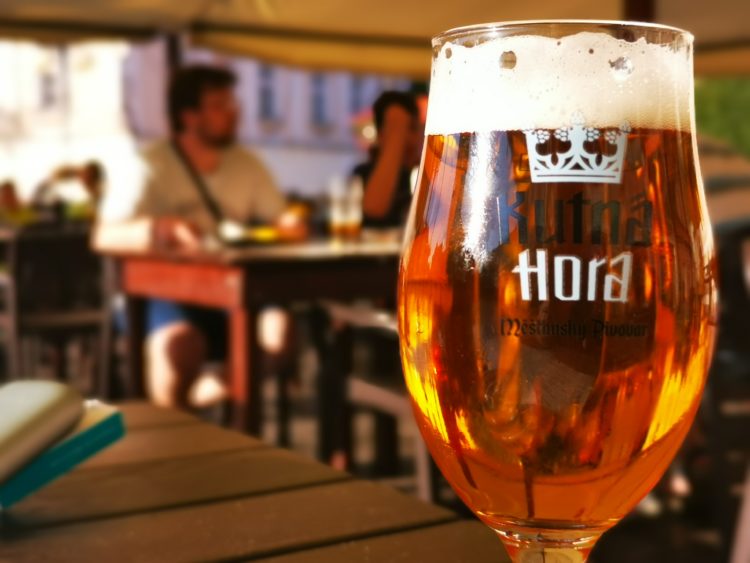 It was also a lot more joyful in a simple but true way, and now, when Garmin decides to check out for the day, I feel excited rather than anxious. And as for strictly scheduled moto service, I do try to maintain my bike as best as I can. But when I wanted to do a planned oil change, I found the oil tank bolt tread was stripped, which lead me to going into a local Polish workshop to get the thing re-treaded, chatting with the locals by way of hands and feet and tasting fresh blueberries from a farm market stand nearby while processing the fact that my bike was laying on its side on a pile of old car tires while a burly mechanic was trying to perform miracles with a helicoil and an angle grinder wearing zero safety equipment. 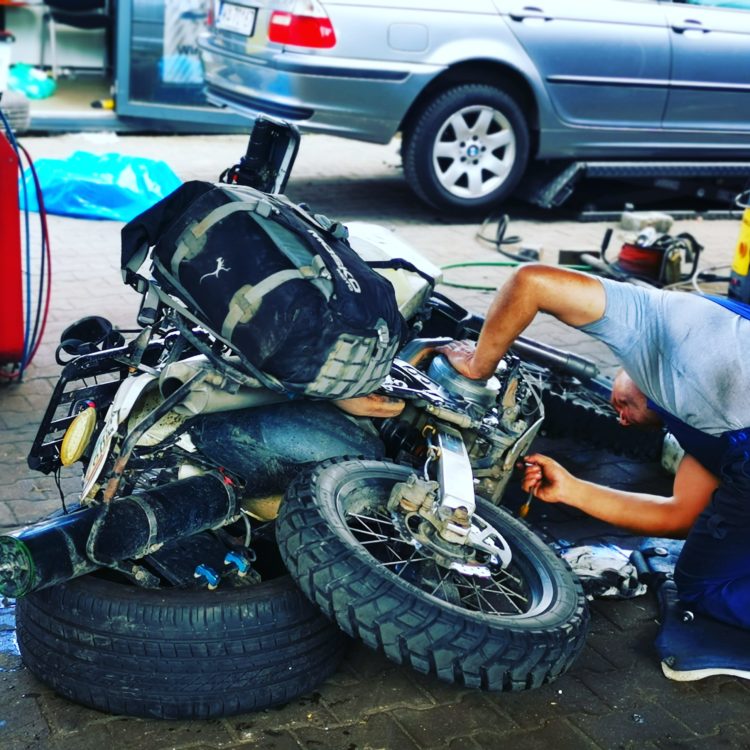 And life was good.

Do you ever try to over-optimize travel or do the opposite and keep things simple?