Editor’s Note: This post is kindly sponsored by Clint and the team from Motorcycle Shippers. Motorcycle Shippers can ship your motorcycle door-to-door around the United States with minimal hassle. If you want to start a ride away from home or ride further without looping back, these folks can help. Perfect for long trails like the Trans American.

However, if you simply want to do a long distance overland journey and aren’t too concerned whether it’s a RTW or not, you can do five long overland routes without shipping your bike across an ocean. Depending on your location, you can simply leave your home one day and travel for thousands of miles without touching an ocean.

The Alaska-Ushuaia ride is probably the most popular among North American riders. Spanning two continents and over 30,000 miles, the route begins in Deadhorse, Alaska, and ends in Ushuaia, Tierra del Fuego island, Argentina. Technically, you will need to ship your bike from Panama to Colombia to cross the Darien gap, but it’s a short trip costing anywhere from $600 to $1,000 and doable in three days, so we won’t count it as an ocean crossing. 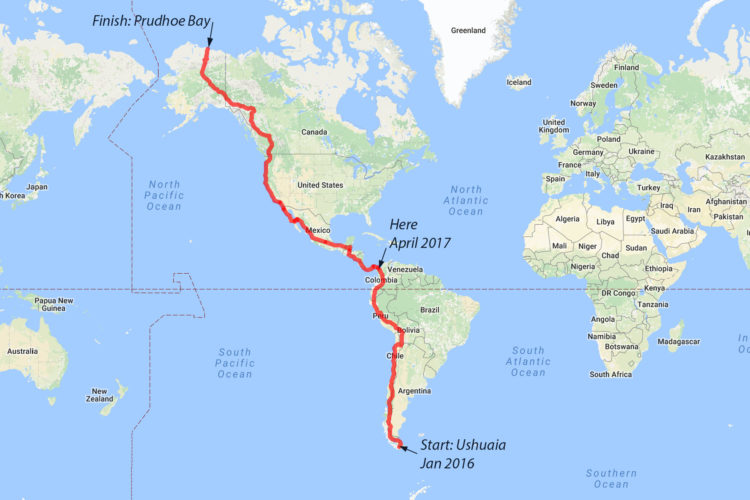 The Alaska-Ushuaia route encompasses breathtaking scenery from the Rockies to the Andes, from the Arctic to the Antarctic, and crosses the arid deserts, rainforests, boundless plains, high altitude mountain passes, glacier lakes, and beautiful coastal regions. The diversity of terrain, weather and seasons, cultures, and languages is mind-boggling, and it’s certainly one of the bucket list rides for any two-wheeled adventurer.

What makes the Alaska – Ushuaia route so attractive is that while it spans two continents and multiple countries, it’s fairly easy to travel because of the straightforward visa and bike paperwork processes along the way. It’s also relatively safe, and you only need to learn a little Spanish because that’s the language spoken in most countries in Central and South America as opposed to each country having their own languages like in Europe or Asia.

This is the longest unbroken overland route from Asia to Europe, stretching for over 9,000 miles from the port city of Vladivostok on the Sea of Japan in Russia to the Portuguese capital Lisbon on the shores of the Atlantic Ocean in Europe. The shortest way is via Russia, Belarus, Poland, Germany, France, and Spain, but you can also do a longer route and include China, Mongolia, Kazakhstan, Kyrgyzstan, Tajikistan, and Uzbekistan in your trip. There’s plenty of on and off-road riding, incredible scenery, wilderness, and different cultures along the way. The visa and bike import paperwork can get a little complicated in China, but for Russia, Mongolia, and Europe, the process is fairly straightforward and simple. When choosing this route, be mindful about the seasons and weather, especially in Central Asia, as some mountain passes might still be covered in snow even in May. 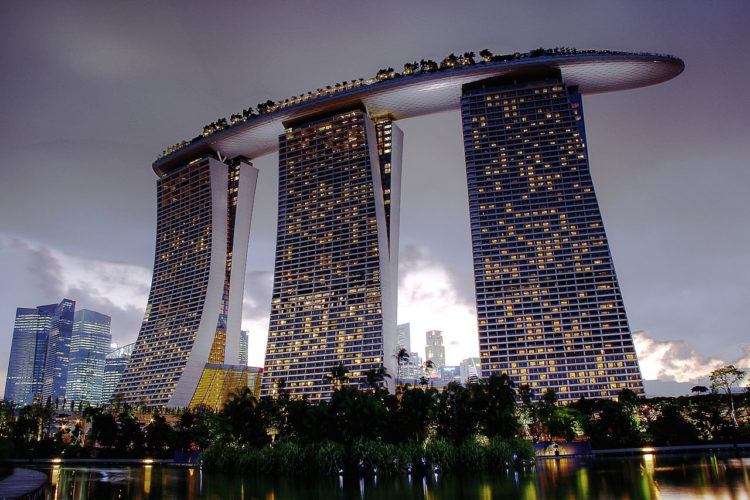 Another long overland route connecting Europe and Asia is UK-Singapore. Spanning over 10,000 miles via continental Europe, Turkey, Iran, Pakistan, India, and Southeast Asia, this is a popular route among European riders, especially as it includes Himalayan passes. Once you reach Singapore, if you don’t feel like going home just yet, you can island-hop all the way to Timor-Leste and ship your bike to Darwin, Australia, to include one more incredible continent on your trip.

A few countries on this route will require you to have a carnet de passage, and places like Iran and Myanmar seem to be constantly changing their policies towards large capacity motorcycles, so always double-check what the current situation is before going.

If you don’t feel like going overseas, North America has some of the greatest trails for adventure motorcycling in the whole world: the Trans America Trail and the Trans Canada Trail (aka. The Great Trail). You can do one of them or combine them both, connecting from the Trans America Trail in Oregon to Trans Canada Trail on Vancouver Island, then looping back via Newfoundland and New York. 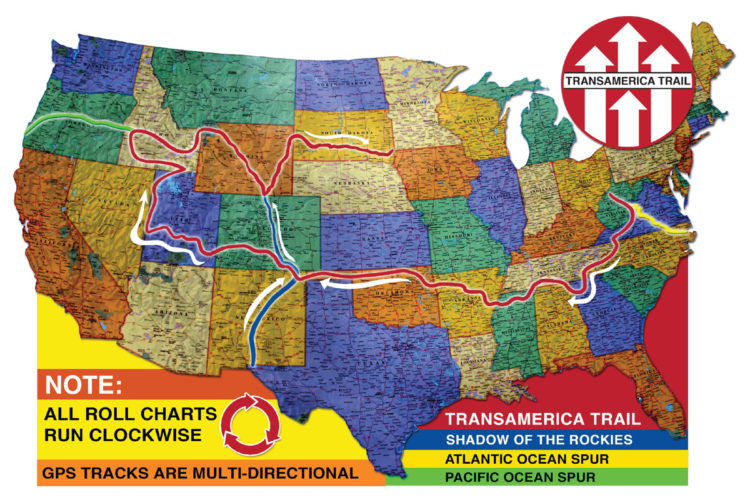 The Trans America Trail, a roughly 5,000-mile route connecting the East Coast with the West Coast via a network of paved and gravel roads, is easily one of the most scenic rides in North America. Trans Canada Trail is longer, stretching from Vancouver Island to Newfoundland Island for over 9,000 miles, but equally stunning and in parts, a little more demanding.  Both Trails hardly need an introduction among North American riders, but for everyone else, these routes offer the most interesting, scenic, and just breathtakingly beautiful landscapes of the US and Canada.

The great thing about doing these long overland routes without shipping your bike across an ocean is that they can easily be combined. For example, you can do the Trans America and Trans Canada Trail, then head to Alaska and start your journey to Argentina. Or, after getting to Lisbon from Vladivostok, you can turn East again and head for Singapore this time. The great thing about these routes is that they span a multitude of different terrain, time zones, seasons, countries, and cultures, making for an unforgettable adventure.