Some of its novel electric motorcycle approaches include a traditional foot-operated gear shift lever, and a thumb-activated energy recovery system.

But now, Kawasaki is thinking far outside the traditional electric bike box.  A patent application discloses their plan to have the final assembly of their electric machine take place, not at the factory, but the selling dealer’s facility.  The fact that Team Green is patenting its assembly process says that the company is thinking ahead to the actual production of electric motorcycles.

Typically, motorcycle manufacturers build their machines around the engine.  The engine and the frame are installed very early in the assembly process.  But electric motorcycles have different concerns and requirements.  The batteries that power electric vehicles are often “large” heavy components manufactured in a vendor’s factory.

If the battery must be installed at the motorcycle manufacturer’s facility, the vendor will have to ship the battery to the manufacturer.  Doing so adds a risk of damage to the battery and/or its electronics. That risk extends to both the shipment to the factory and the final delivery to the dealer.

But what is even more interesting is that the top of the motorcycle’s frame is easily removable.  Once removed, it would be relatively easy to slot the battery pack into the center of the bike.  This would allow Kawasaki to utilize a two factory approach to manufacture and deliver electric motorcycles to waiting customers. 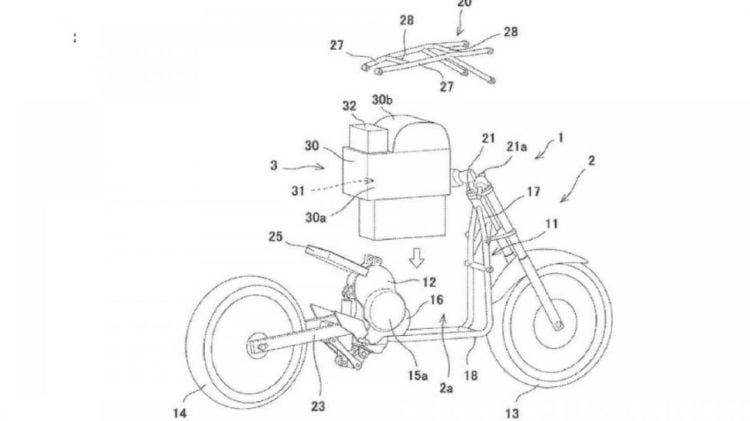 The patent application also describes how the bike would be manufactured and delivered.  The battery and the bike’s electronics will be made at a dedicated facility (likely a vendor’s facility).  While at the same time, the bike’s chassis, suspension, brakes, wheels, and bodywork are in assembly at Kawasaki’s own manufacturing facility.

Once complete, both separate assemblies are ready for shipment to their final destination; a dealer.  The dealer would then complete the final assembly process by mating the two complete assemblies.

If you think about Kawasaki’s electric motorcycle process, it could substantially simplify production.  The two factories manufacturing the complete assemblies could be located on different continents.  That would enable each manufacturer to be close to the necessary raw materials and also ensure that the battery and electronics do not have to be shipped twice.

The reduced shipping requirements could ultimately increase production yields.  The risk of shipping damage to sensitive components in electric batteries and electronics could be cut in half if they only require one shipment.  Kawasaki’s process could also reduce the risk associated with environmental hazards, dropping, shaking, mishandling, etc.

There is also another consideration.  The rules and regulations for shipping high powered electrical components such as motorcycle batteries can be quite complex.  Battery manufacturers have significant experience in packing and packaging their products.  This is something that the motorcycle manufacturers likely don’t have.  Not having to learn or to deal with these regulations, particularly in a fully completed bike, could result in significant cost savings.

Kawasaki patent application also shows us its final assembly process.  A simple drawing shows the entire process starting with each individual final assemblies.  In the case of the motorcycle itself, you see the bike in the factory heading to the dealer.  In the case of the battery and electronic components, you see the battery packs in storage.  When appropriate, Kawasaki will ask the vendor to shop the packs to the dealer. 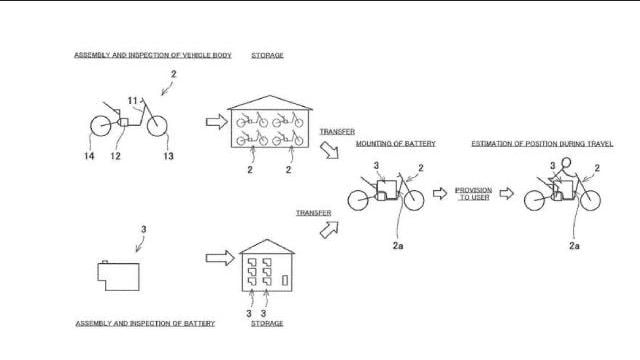 Once both assemblies reach the dealer, the final assembly of the electric motorcycle can begin.

Kawasaki’s patent application also explains that the battery and its control electronics are a single unit.  The unit’s accelerometers and tilt sensors for the machine’s ABS and traction control systems are permanently part of the battery.  But this also means that those components can have another purpose.

These components can monitor the battery and electronics package during both the production and shipping processes. The battery’s electronics will record any significant impacts, tilting, or jolts.  Upon arrival, the dealer can then plug in a diagnostic computer to check the health of the battery pack prior to installation into the motorcycle and reviews the results.

If all is in good standing, the dealer will proceed with the final assembly process.  And, once all assembly and testing are complete, the bike’s sensors and electronics take on their respective roles as part of the motorcycle’s control systems.

When will production begin?

Kawasaki has not said when they will start manufacturing electric motorcycles.  But considering the above, it’s clear that Kawasaki is serious about bringing them to market.

When any manufacturer spends ten years developing a product, you know they are spending a lot of money and will want a return on their investment.  So what’s holding Kawasaki up?

Whatever their plan is, Kawasaki is demonstrating its commitment and intent to produce electrically powered motorcycles.  When production will ultimately begin is up for discussion.