The Witchita Falls Texas police department (WFPD) recently announced some of its officers were changing uniforms.  It revealed that some of their officers would be transitioning from all-black uniforms to a different version.

So what’s unusual about a police department changing its uniform design?  WFPD has changed its motorcycle officers uniforms to increase their visibility.

WFPD spokesperson Harold McClure spoke to media to help make the public aware that the WFPD motorcycle section was wearing a new uniform.  The new uniform tops are light blue with significant reflective accents.  McClure said he wanted the public to know that “yes, that is a police officer in that blue uniform”.

Motorcycle traffic Sgt. Van Dotson chimed in with “We want the public to know, yes, we are police officers for the City of Witchita Falls”.  Dotson also said that WFPD has been looking at changing the uniform color.  “We’ve been looking for a little while to go with something away from the solid black that we’ve been wearing for the last several years.

Dotson went on to say that they wanted to look for something that is highly visible.  The new uniforms not only are a lighter color, but several reflective elements have been added into the gear.   Dotson said that both night and early morning visibility will be substantially increased by the new reflective material. 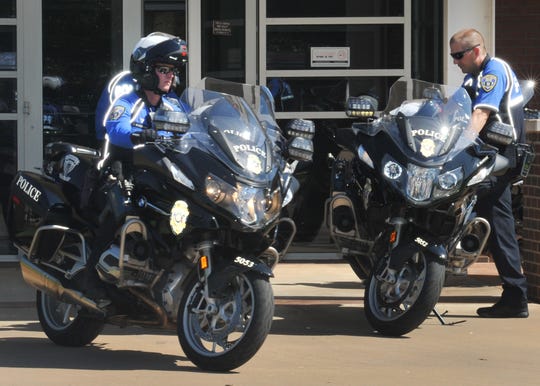 Another bonus of the new uniforms is its cooling ability in summertime weather.  Dotson added, “Just coming in this morning, we can already feel that it’s a little cooler, obviously than the dark black that we would wear.”

Do you think the new uniforms increase both day and night visibility substantially?  If the goal was to increase officer visibility/conspicuity has this uniform done its job or is a more “high-viz” color called for?

Tell us what you think in the comments below.