The residents of Corby, Northamptonshire, have had enough with illegally ridden dirtbikes.  Complaints have increased, likely in part due to the COVID-19 lockdown.

The Kettering and Corby Neighborhood Policing Team says they have to do something about it.  Now, when the police catch an illegal machine, they are often seizing it.  While that’s not so unusual, it’s the plan the cops have for the machine that is catching attention.

Apparently, some riders are still taking to the UK’s roads, parks, and public property with their machines.  The police say that this kind of operation is illegal and unsafe for the public at large.

So they plan to take further measures to deter this illegal practice.  They plan to crush the seized bikes at a public event as a warning to those who may be riding the unregistered/uninsured machines on public roads or property. 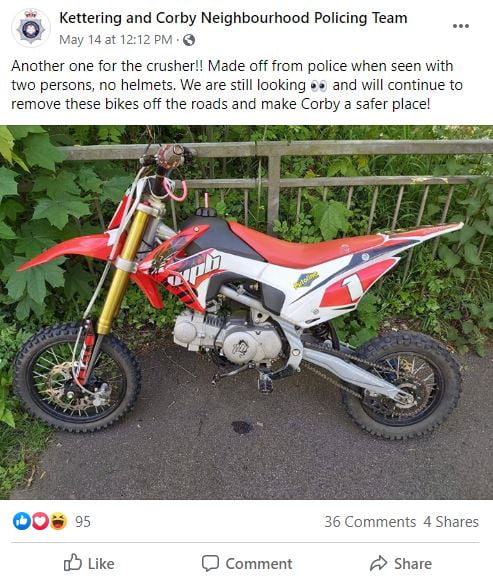 While police must take action to stop the practice, is sending the bikes to the crusher the answer?  Some people have commented on the Kettering and Corby Neighborhood Policing Team’s Facebook page suggesting other possible ways of dealing with the illegally ridden and sometimes stolen bikes.

Some suggest that the police auction the bikes for charity.  Other’s say that the bikes should be donated to charity.

There’s also the question as to whether crushing a stolen machine is unfair.  While it may be a fair punishment to the person riding the stolen bike, is it fair to the lawful owner of the machine?  Should police spend more time trying to find the owner than just crushing it?

Lest you think that the illegal dirt bike problem is only a UK phenomenon, it’s not.  This kind of riding is a problem in the US as well.  Many major US cities have similar issues like the one we previously told you about in Massachusetts.

So what do you think?  Should the bikes be seized and crushed, or should something else be done to eliminate the issue?  Let us know in the comments below.