Somehow, the people at Motorcycle.com have acquired slides from a presentation by Pierer Mobility, parent company of both KTM and Husqvarna. And, the details revealed are very interesting.

First up, details from the KTM slide: For starters, it confirms there’s a parallel twin series coming. The new 490 platform isn’t exactly a secret, but this is maybe the most information we’ve gotten about it yet, along with fairly concrete indicators that the 125, 250 and 390 series motorcycles are not going to be discontinued as rumors suggested (quite the opposite! the 390 line appears to be gaining an enduro model and a supermoto model …). 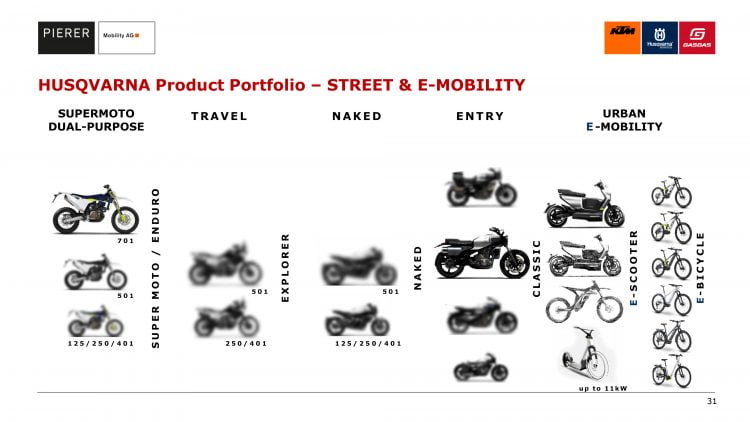 There’s also a slide for Husqvarna’s future product lineup, from the same presentation, ostensibly. Interestingly, it indicates a 501 platform is coming, which seems to be different from the current single-cylinder 501 platform. Presumably, this is a repackaging of KTM’s 490 platform, just as Husqvarna has 901 Norden based off the 890 KTM. The graphic indicates supermoto, adventure and neo-retro versions of the 501 will be coming, as well as similar models for the 125, 250 and 401 platforms (again, just repackaged KTM designs, all made in India).

As these aren’t official news releases by Pierer Mobility, we haven’t seen any timeline for these new bikes. It would seem likely that we’ll get our first look at the 490 platform sometime in 2020, with market availability in 2021. The Husqvarna 501 will most likely follow the year after. If KTM and Husky follow the same piecemeal model release as the 390 series, we’ll probably see a two-three bikes in each series released each year, starting with the Duke models. However, since the Indian production lines are most likely getting more streamlined, efficient and experienced now, perhaps those timelines will be moved up for 2020.