Then you engine brake with the best of them, just like a lot of us do. Sometimes brakes on a motorcycle seem rarely necessary if you ride on the street or sport tour because of engine braking. They’re just there for the final stop!

That’s great, but that person in the car behind you might not be aware of what engine braking is and how quick you can slow your bike down without using your brakes.

The possible outcome is being rear-ended by an inattentive driver. In 2015 I got a product called Vololights. It’s a license plate surround with a built-in intelligence to activate a light to let the driver behind you know you are slowing down

Vololights is a revolutionary new technology that enhances a motorcycle’s visibility and has the potential to reduce the risk of a rear end collision. Using embedded intelligence, it measures the deceleration of your motorcycle regardless of how you are slowing down. With a variable flash rate, deceleration is also perceptible to the driver behind you

Right now I’m riding around the US and seeing lots of other riders, and watching traffic and amazed how close some riders I’ve seen in the lane next to me nearly getting rear-ended.

I had honestly forgotten it was on my bike, but in traffic, I started noticing drivers behind me giving me the extra room as I engine braked, that was the reminder it was on the bike.

To me, a good product is one that you rarely think about because it just works, Vololights is one of these products.

So if you are primarily a street rider and have had a few close calls then this might be a safety item that is worth looking for.

You might have seen other products on the market that flash the rider’s brake lights to draw the eye’s attention.  Two major deficiencies of these systems are as follows:

1) Current systems are tied to the foot and handbrake signal only.  They do not account for slowing from engine braking and downshifting.  Even though you may be decelerating, drivers behind you might not realize this until it’s too late.  Vololights overcomes this by physically measuring any type of deceleration.

2) Today’s brake lights are not perceptible. What that means is a driver behind you might see your brakes solid or flashing but they cannot tell whether you are ‘tapping’ on the brakes or slamming on the brakes. Vololights solves this problem by varying it’s rate of flashing with the urgency with which you are slowing. 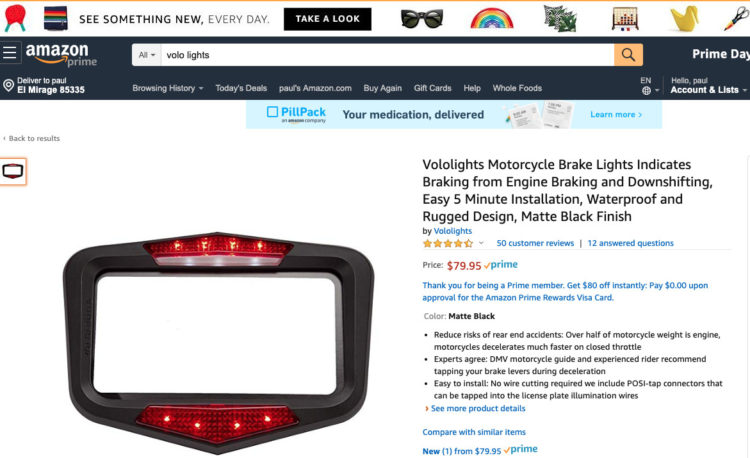