Multiple outlets are saying that Ducati has a new project in the works called Project 1708.  And, they claim that Project 1708 is a new 234hp  Panigale V4 Superleggera.

Some Ducati customers have reportedly received an e-mail from Ducati’s CEO, Claudio Domenicali.  The email read:

This is a very special moment for Ducati and me.  Th moment I write you, I am inviting our most passionate customers to share something truly unique with us.  All the bikes we produce are a declaration of our desire for perfection.  But nothing is comparable with the Project 1708.  In this project, we have modeled the most advanced carbon fiber in the most futuristic forms.  We made our dreams come true as engineers, as motorcycle manufacturers, and as passionate motorcyclists.  Project 1708 is a true affirmation, it is the moment in which we draw a line between trying and doing.  It is our most pioneering creature.  And I am proud to present you this private website, which will introduce you step by step to every aspect of this bike.

Recipients of the email were then given a link to a private website where they could learn more about the new machine.

To seemingly confirm the rumors that the bike is a Panigale V4 Superleggera, a leaked spec sheet has surfaced on Project 1708, and the specs are quite impressive.  The machine features “advanced carbon fiber” according to Domenicali.  Exactly which components will be made of the material is not clear.  But with a feathery claimed dry weight of just 335 pounds, you can expect that more than bits and bobs will be made with the stuff. 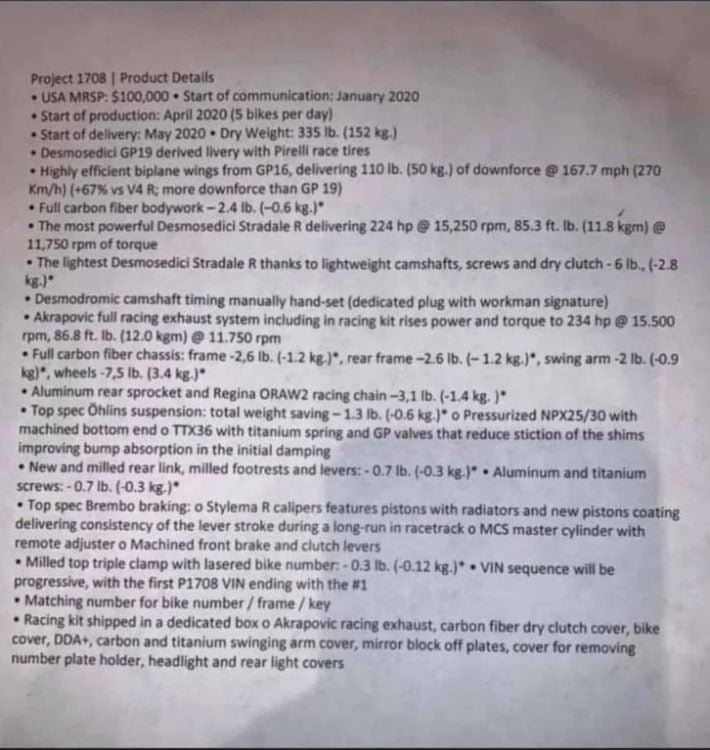 This spec sheet is claimed to be the specs for Ducati’s Project 1708. Photo credit: Asphalt & Rubber

The bike will also include top-spec Öhlins suspension and Brembo brakes, along with a lot of other high spec parts.  Not seen on Ducatis for quite a while, a dry clutch will make a return as well.

Exclusivity has its price

Deliveries will start in April 2020 at a rate of 5 bikes per day.