The British Motorcyclists Federation (BMF) is reporting that a study to ban motorcycles in Brussels has angered many motorists and motorcyclists.   The study is studying the effect of motorcycle emissions.

Brussels Environment is the official agency that is responsible for managing environmental and energy-related matters in Brussels.  The agency recently announced that it will study powered two-wheeler emissions through 2020.  Thereafter, it will issue a decision on whether to ban scooters and motorcycles in the city’s low emission zones. 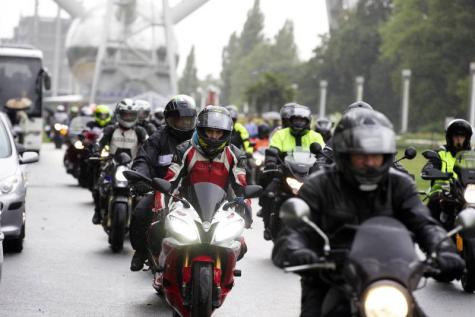 Belgian motorcyclists are angry about a possible ban in Brussels. Photo credit: lesoir.be

Many of Belgium’s motoring groups have expressed their displeasure with the study.  The Belgian Federation of Automobile and Cycle Industries (FEBIAC) called the ban “pure provocation”.

This kind of reasoning is simplistic because it targets a minority of the road users and because it has been proven that daily traffic jams could be reduced with [sic] 40% if only 10% of drivers would choose a motorcycle instead of a car. We invite the Region to look at mobility in a different way instead of announcing a ban.”

French newspaper La Dernière Heure added that motorcycles were responsible for just 6% of carbon dioxide emissions and 0.2% of nitrogen emissions.

At this point, Brussels will only study motorcycle emissions.  But depending on its conclusions, motorcyclists may be prohibited from entering Brussels’ low emission zones in the not too distant future.