The Ducati Multistrada, a street bike with upright, adventure bike-like styling, is about to add another tier to its lineup: the Multistrada V4. The company that has previously been known for its twin-cylinder engines, is further expanding their V4 range that started with the Panigale V4 in 2018, then migrated to the Streetfighter V4 this year. Ducati teased some information about a possible Multistrada V4 in a press release celebrating their 100,000th Multistrada made, but these spy shots are the most recent indication that the model is nearing production. 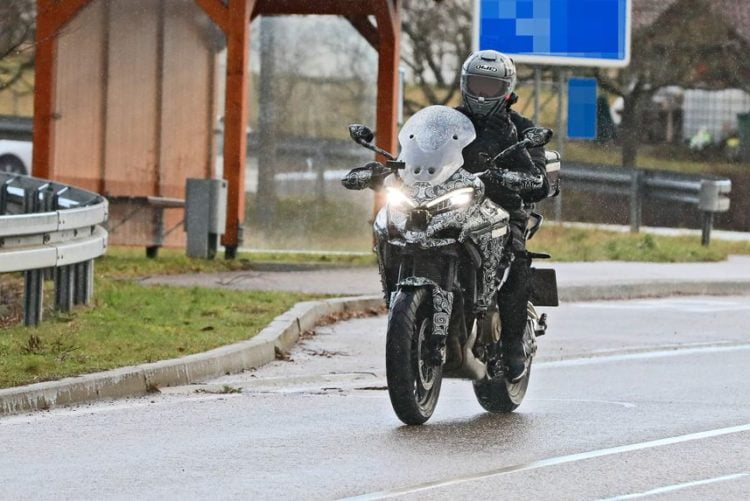 The camoflaged prototype features a dual-sided swingarm with what appears to be an offset single shock mounted directly to the frame, with no linkage to speak of. There is a trellis sub-frame, the typical but modified Multistrada beak, and a small flat panel in both the nose and tail reported to be radar sensors for smart cruise control and blindspot monitoring.

The rear suspension also appears to have electronic control, similar to Ducati’s existing Skyhook system. This might be one reason why the bike can get away without a linkage for the rear shock.

The engine looks similar to the Streetfighter V4 unit, with speculation that the Multistrada will feature more mid-range and bottom-end friendly tuning. That said, the Multistrada V4 should still put out big horsepower numbers in the 180 to 200 hp range.

Normally we would expect to see the production version of the Multistrada V4 in late 2020, but with the current state of affairs around the world, this could easily be delayed. When the Multistrada V4 does eventually appear, if too much is just enough, this might be the adventure tourer for you.