You may or may not have heard of Pursang.  Pursang was the motocross model from the Spanish motorcycle manufacturer Bultaco.  From 1967 to 1984 Pursang bikes did well in off-road competition.  Eventually, the Pursang’s abilities won the Bultaco model a sort of celebrity following.  The model gained even more fame when Peter Fonda rode one in the movie Easy Rider.

In a tough economy, Pursang met with financial difficulties and eventually folded.  That could have been the end of Pursang.  But in 2018, a Pursang concept motorcycle made an appearance at EICMA.  Then, in 2019, Pursang revealed a more advanced prototype model at the Barcelona Auto Show.

And now, Pursang is revealing its two new models.  The Pursang E-Track and the Pursang E-Street.  As you may have guessed, the “E” moniker at the beginning of each model signifies that both machines are electric.

The E-Track is Pursang’s scrambler model while the E-Street is obviously destined to street riding.  So let’s take a look at both models. 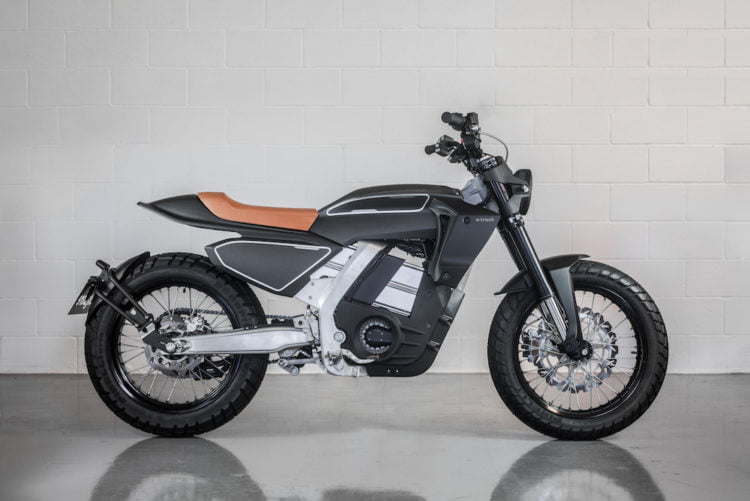 The Pursang E-Track is its electric scrambler model.

The first 60 E-Track bikes should be available by September of this year and you can now reserve your E-Track online.  You’ll have to fork out €13,700 ($14,800).  That’s not an insignificant chunk of change.  But the first 60 units get some unique features such as carbon fiber body panels.

The E-Street bike is somewhat less powerful than its sibling.  It has a smaller 8 kW motor and is powered by two removable 2.4 kWh batteries (4.8 kWh total).  That’s different than the E-Track whose batteries are not removable.

The E-Street is the more street-oriented version of the two bikes. The E-Street features removable batteries hidden in the bike’s tail section as seen in the picture below.

So soon, you will have two more electric motorcycle options.  What do you think of the new machines?  Let us know in the comments below.