Can you finish the biggest rally raid in Europe if you’re an IT tech with zero enduro or motocross training, aren’t a competitive person by nature, and your only motivation is to have ridiculous fun (and get your money’s worth for the entry)?

Tim Hewitt, also known as Dirt Bike Jesus, an adventure rider from Scotland, did just that. “I did a HU Mountain Madness event and had such a great time that I decided I wanted to try the Hellas Rally in Greece. I entered the Hellas Lite class, where riders were allowed to have a GPS next to the roadbook and do about 70% of the same route as the licensed rally racers, did a last minute navigation course to get a grip on the roadbook, installed a navigation tower on my Husqvarna 701 named Lenore, and off we went”, – Tim said. 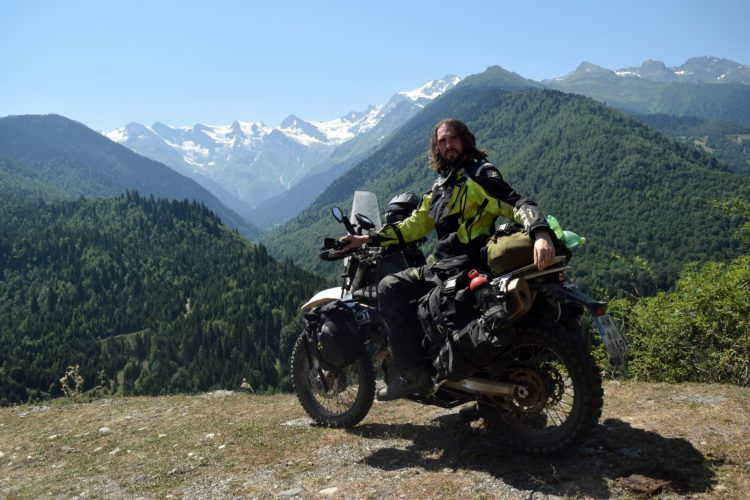 A detailed account of Tim’s rally experience can be found on his blog. As Tim is preparing for his next adventure – a ride across South America on a locally bought Honda XR150 – we had a chat about what it takes to finish a rally as a complete rookie.

On your blog, you said you were terrified before the rally?

The closest thing to a rally I’ve ever done was the Mountain Madness event at the Horizons Unlimited meeting in Spain. It’s not really a rally, it’s more like an orienteering event – you have to follow a given route and collect waypoints. The great thing was that you could go at your own pace. You could go nuts and collect all 500 waypoints in one day, like the serious army dudes, or you could be as chilled out and collect as little as the constantly drunk Irish dudes that were there. I loved it, it just was so much fun that I thought, well, why not do a rally next?

I always thought that rallies were super expensive, but then I saw that Hellas Rally entry fee was 600 euros, which didn’t sound too bad. I already had a rally-capable bike, so I thought, why not, I’ll give it a go.

I expected it to be really intimidating – I thought I’d meet these hardcore, super competitive, pro riders and it would be so tough. But on day one already, when I got there and started talking to people, I realized it wasn’t such a scary world after all, everybody was really chilled out and friendly. 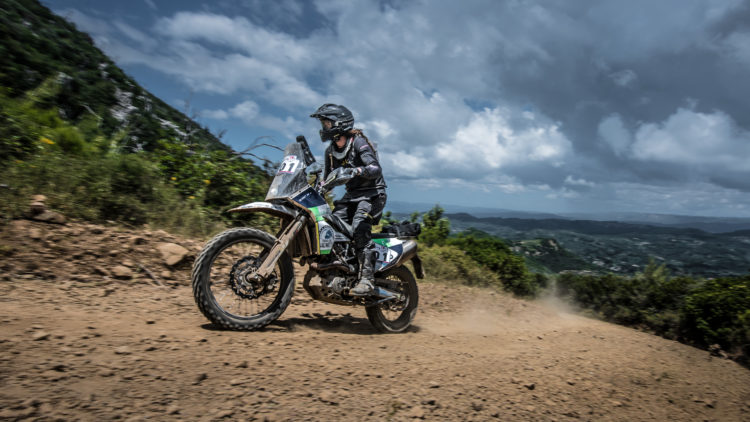 How did you prepare?

Hearing I wanted to do a rally, most people told me I would die. But then, people said I would die when I first started riding bikes, too.

I did a navigation course in Germany with a professional racer who ran a roadbook course for two days. You write out your roadbook and then follow it, and after that, swap with other riders’ roadbooks. I thought it was absolutely essential, it really helped me understand that kind of navigation. It was maybe 400 euros or so, and it was a really good experience.

In terms of riding training, I didn’t do much. I’d done off road trips and trail riding for the last few years, but that’s about it.

A week before the race, I did a bit of the Trans Euro Trail in Greece to get the feel of the terrain, and that was it. 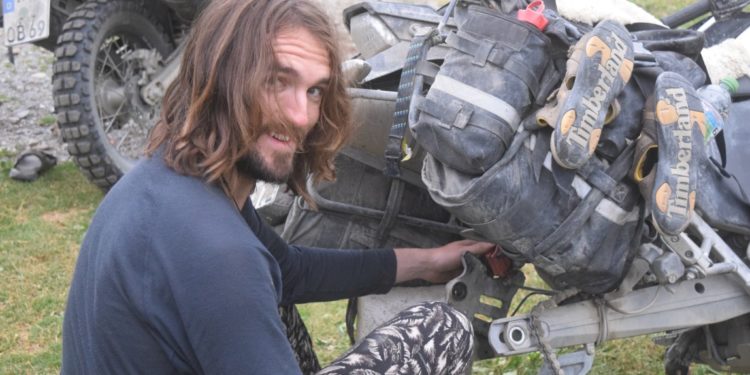 Frankly, I don’t feel like I lost out a lot by not doing rider training, but I definitely lost out on not going to the gym. That hurt! Being unprepared physically hurt, so that’s definitely something to work on.

I think, for an event like the Hellas Rally, if you’re a decent trail rider, you’re good to go. But you do need to be fit.

I expected it to be hard, and it was. I’m not a competitive person so I wasn’t going to race hard, I just wanted to challenge myself and have fun.

Stage 1 was probably one of the hardest stages in terms of terrain, but I made it through, and even my speed was OK because I’d taken that navigation course. I’m not a fast rider, I’m a cautious rider by nature but because I knew my navigation, I just plodded along and made very few navigation mistakes, and that helped me a lot. I saw lots of riders passing me, only to get lost and have to double back.

Sand, on the other hand, was something I couldn’t do. My tires were not fit for sand at all, and after the first stretch of the dunes, I was done. I crashed in double figures that day, it was every 2-300 meters that I went down. I just couldn’t do it.

Once I got back on the road my bike wouldn’t go faster than 80km an hour because I just incinerated my clutch plates. I didn’t finish the stage.

I didn’t get disqualified though, but I got massively penalized – minus two hours or so.

Still, I finished 7th out of 15 or 16, and I’m more that happy with the result. It’s mostly because people started dropping out, mainly from sheer exhaustion, and I just kept going, even though I wasn’t fast. 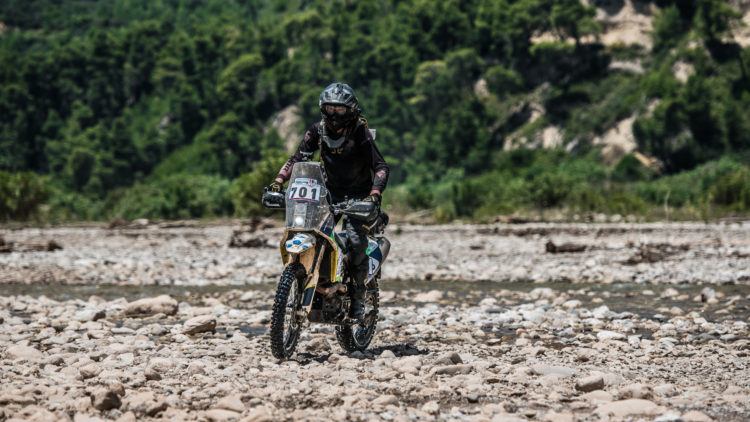 How did you find the strength to keep pushing on?

I spent a few years as a soldier, and I guess I picked up an attitude of “keep going beyond the point of where you can’t stand up anymore.” I’ve dragged myself on mountains on my hands and knees before.  During the rally, I just wouldn’t give up. I dragged myself on.

Besides, I’m Scottish. I paid a lot of money for this thing, so I couldn’t just give up!

How do you afford all this racing and traveling?

I’m an IT techie, I can work from anywhere, so I just travel a lot. I don’t live on the road, I usually go for rides for a couple weeks or months, then head back. Although now, I might spend a little more time on the road.

I’m a fairly new rider, too, I don’t come from a family of motorcyclists. My parents wouldn’t even let me ride a bicycle until I was maybe ten!

I started riding bikes because where I lived, the traffic was bad, so I got a little 125cc bike. I loved it and quickly moved on to a bigger bike, a street 600cc motorcycle.

Then, I bought a Triumph Tiger 800 complete with aluminum panniers and an expensive riding suit and started traveling. My girlfriend at the time had just gotten her license, and we did a motorcycle trip to the Balkans. She was on a smaller bike, and I realized how much more fun that thing was, so soon, I traded my big, heavy ADV bike for the Husqvarna 701 and started doing more and more off-road riding, doing parts of the Trans Euro Trail. Smaller, lighter enduro bikes are just so much more fun.

What’s next for you?

I’m now heading for South America and I hope I can do a few little rallies there, just simple, entry level stuff. It’s not my priority in South America, but racing an XR150 might be really fun! 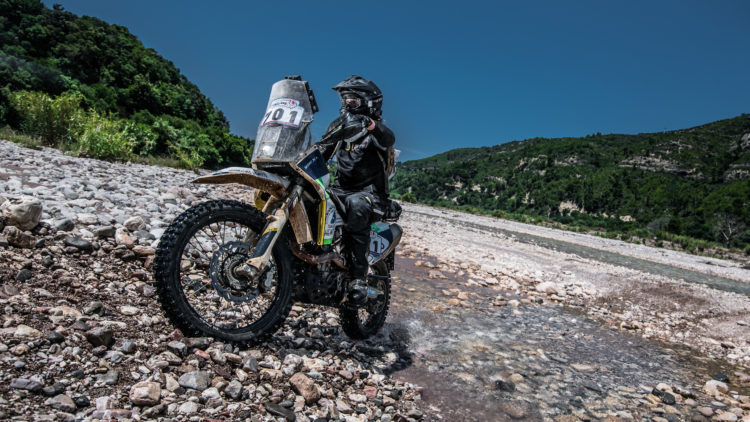 Feel inspired? According to Meletis Stamatis, organizer of the Hellas Rally, the event is the biggest of the kind in Europe – but it’s also the most inclusive. “We had 285 participants in the rally last year, and we expect over 300 entries in 2019. We only have one bivouac during the whole rally, which helps keep costs down and which is why entry fees are more than affordable. At Hellas, you will see the big names like Matthias Walkner, but you will also see amateurs who are doing their first rallies. I want the rally to be open to all riders, not just the elite, I want people to get involved in the rally world”, – Meletis told me.

This year, Hellas Rally will begin on the 20th of May. “A completely new area, 2,000 kilometers with the longest day being 520km, new tracking system, and two classes for those who are doing a rally for the first time – Hellas Lite, 70% km the same route as licensed competitors, and Adventure Raid where you have GPS navigation and can ride on any bike you like, including the big adventure machines. Both of these classes are license-free, so all you need is a bike and a personal insurance for injuries. You can race on anything between 250cc and 1200cc”, – Meletis explained.

“And if you want to practice first… Honestly? The best practice for a rally is a rally!”.