Rally season in North Africa is more or less year-round, whereas in Europe, it’s about to begin in three months: the first bigger European rally race, the Hispania Rally in Spain, kicks off in March 2020.

With so many rally races to choose from, which one should you go with as an amateur? While I’d already compared rally races and rally training camps, I was wondering which rallies are the most noteworthy yet achievable for riders who aren’t racing pros but want to give rallies a go.

To find out, I chatted with Meletis Stamatis, the mastermind behind the largest European rally race, the Hellas Rally Raid, among others. 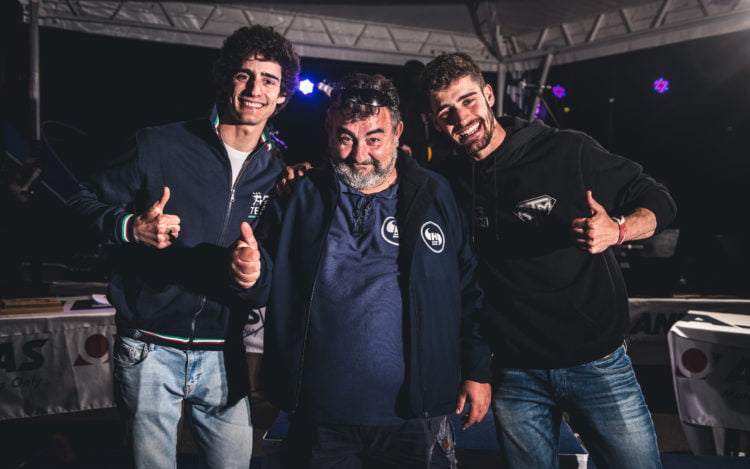 With rally racing becoming more and more popular and accessible to amateur riders, what should rally beginners look for when choosing their first rally?

Complete beginners need to participate in events that have clear regulations and ensure safety. Things like awesome terrain, decent roadbook, good hotels and great food is what most people are looking for, but let’s face it, nobody would organize events with boring scenery or crappy accommodation. The stunning landscapes, the roadbook navigation and good food and hotel options are more or less a given. Safety, on the other hand, is something that people simply forget to look into. So I would say, always find out about regulations and safety measures. How many track marshalls, medical teams, ambulances do the organizers have? Will there be a paramedics’ helicopter on standby? Rally racing is great fun, but the fun ends when you have an accident and there’s no one to help you, so always make sure that the rally organizers know what they’re doing in terms of safety and medical assistance. 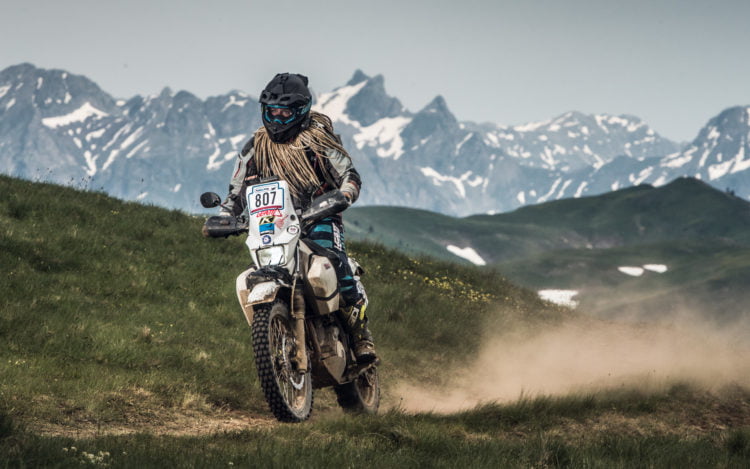 Awesome scenery is a given during rally races

Another thing to check is whether the rally you’re interested in is FIM-licensed. Official, FIM-sanctioned races will have tighter safety standards and regulations in place, ensuring that competitors are being looked after. Unofficial, unregulated races or events that mimick rally races are not FIM-licensed, there are no regulations, so it’s up to the organizers to decide what sort of safety measures are put into place.

Plenty of large, official rally races in Europe are open to amateurs, and I always say that the best practice for a rally is a rally. As a complete beginner, you might make more mistakes, you won’t be as prepared as professional racers, so it’s really important to make sure you will be safe first and foremost. 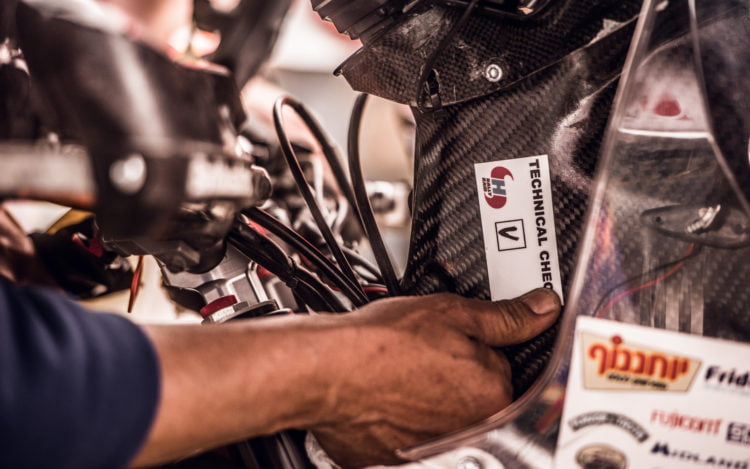 What else should riders pay attention to when picking their first rally?

Insurance. Often, people assume that their travel insurance will cover them in case of an accident during a rally, but that’s usually not the case. At Hellas, for example, we require competitors to have racing insurance to make sure they’re covered. Most rally organizers have partnerships with insurance companies and can offer racing insurance during the scrutineering day; otherwise, you can always shop around and find the best option for you. Just make sure it covers motorsports and racing and provides things like repatriation in case of an accident. 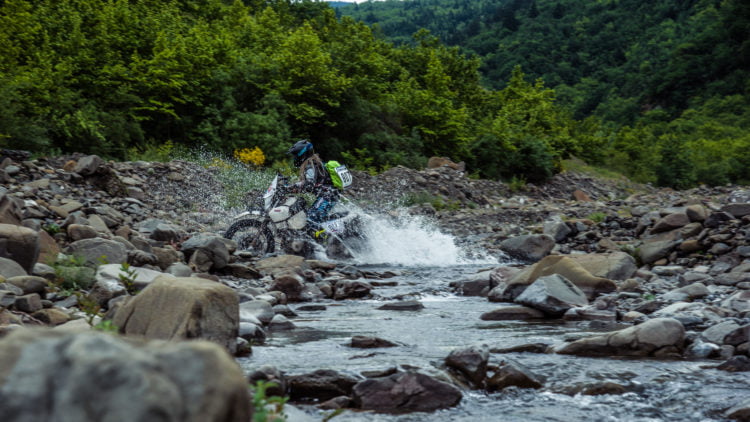 Which European rallies are most amateur-friendly?

I think most larger European rallies are open to amateurs and most even have an adventure or similar class where people can ride large capacity motorcycles if they so choose. Hispania Rally, Hellas Rally, Trans-Carpathic, Iberian – all of these rallies are large, FIM-licensed events which are amateur-friendly and they are all great as a first rally for a complete beginner. The entry fees are similar, around 700 euros, as is the race format; the only difference is terrain, and the duration may vary slightly.

What about desert rallies in North Africa?

Frankly, if you’ve never raced in a rally before, doing a desert rally as your first isn’t something I would recommend. You just won’t have any fun – roadbook navigation in a desert is very different, there are no visual references in the dunes and you’ll have to use several navigation devices such as a compass and the GPS system from the organizers. Typically, there are waypoints that you have to validate – something that doesn’t happen in European rallies. 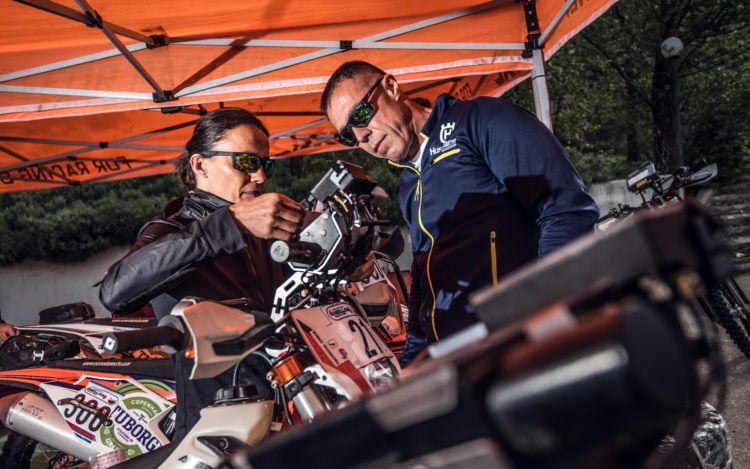 In addition, desert conditions are much tougher: you may start in the morning when the temperature is 6 degrees Celsius and then during mid-day, it will rise to 40 C. Most amateur riders do not have a proper motorcycle for a desert rally, either. So I would say, do 2-3 rally races in Europe first, then go for a desert rally. Otherwise, it might simply be too difficult.

Budget-wise, desert rallies are typically more expensive than European rallies. Panafrica Rally in Merzouga, Morocco, is the cheapest among them all with the entry fee being below 2,000 euros. Most desert rallies charge at least a 3-5,000 euro entry fee. Panafrica is also very amateur-friendly because the bivouac doesn’t move which makes it easier, and you have plenty of refueling stops during each stage. Still, it’s a very tough rally for complete beginners because of the terrain, high temperature, and difficult navigation.

For non-European riders, what’s the easiest way to get a rally motorcycle?

It depends on how many rallies you want to do. The easiest option is to rent a rally motorcycle locally. Most rally bike rentals include mechanical assistance throughout the race, which makes life much easier. Typically, renting a motorcycle and having mechanical support during the race costs around 1,500 – 2,000 euros on average.

At Hellas, we’ve seen an increase in Australian riders and what some of them do is, they buy a motorcycle in Europe and just leave it there for their next race. If you’re going to do more than 2-3 rallies per season, this makes sense because the cost of rent times three pretty much equals a new bike. Of course if you simply want to try one rally, renting is probably best. On the other hand, if you buy a bike in Europe, you can also take part in North African rallies as it’s such a short distance to get there. so it’s really about what you want to do.

Ready to race? Here’s a complete list of rally races around the world if you still haven’t decided where to go.