Sometimes little things make a big difference.  I found one of those things at AIMExpo this year in the form of the RAM Quick-Grip XL phone mount.

For many, a smartphone has become the number one device on the bike.  From music to navigation, lots of people have ditched their GPSs for their phones.  And I am one of them.

I do most of my navigation with the phone and google maps or other similar navigation tools. My long-serving GPS is now mostly relegated to finding POIs (like fuel, food, lodging) when I am out of cell coverage.  I only occasionally use it for navigation when I forgot to download the route to my phone.

So with the phone now important, it is even more critical to have a mount that securely carries it.  Up until now, I used both an X-type mount and a rubber band to secure four corners of the phone.  For pavement, the X-mount is OK, but anytime you venture off-road, you need the rubber band. 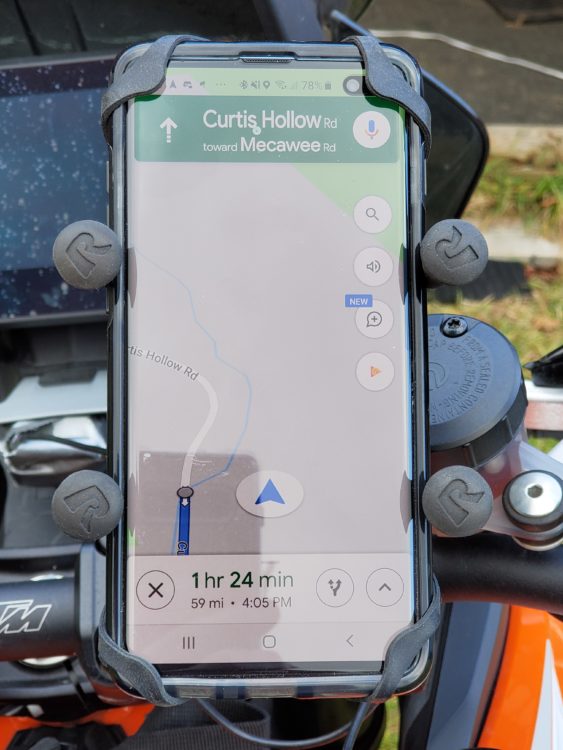 An X-mount with the rubber band attached to the four corners of the phone. On pavement, the X-mount works fine. But if you venture off road, you need to use the rubber band.

Need to take a quick picture?  Forget about it; it’s going to take you time to unhook the rubber band and remove the phone from the mount.  Once you’ve missed the picture you wanted, you then have to put the rubber band back on.  You might even have to put your gloves back on afterward.  Ugh.

And, that’s where the little things like the RAM Quick-Grip XL phone mount come into play.  While at AIMExpo this year, RAM was introducing its new RAM Quick-Grip XL phone mount.  RAM already had a smaller version of the Quick Grip.  But they decided they needed a way to hold larger format phones like a Samsung S10.  It just so happens that’s the phone I carry.  RAM offered to send me the new XL to test, and I happily accepted. 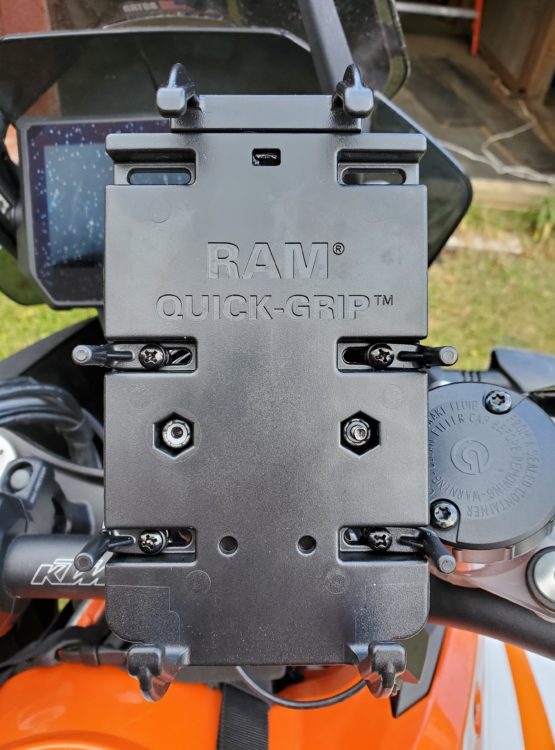 The RAM Quick-Grip XL mount without a phone attached.

The RAM Quick-Grip XL mount features a flat base with two finger-like curved hooks at the top and the bottom of the mount.  The top finger hooks are spring-loaded and exert downward pressure on your phone to hold it in place.  As additional protection, RAM includes four manually adjustable fingers that you can place in any of six different locations at the side of the phone.  These fingers ensure that the phone can not slide out of the side of the mount.

To insert or remove your phone, all you do is place the top portion of your phone under the top fingers and push up.  The spring will then allow you to insert the phone into the mount.  Once the phone is in its appropriate location, it is firmly held in place.  The top fingers always exert downward pressure on the phone, And the fingers at the side of the phone ensure that it does not slide out of the mount. 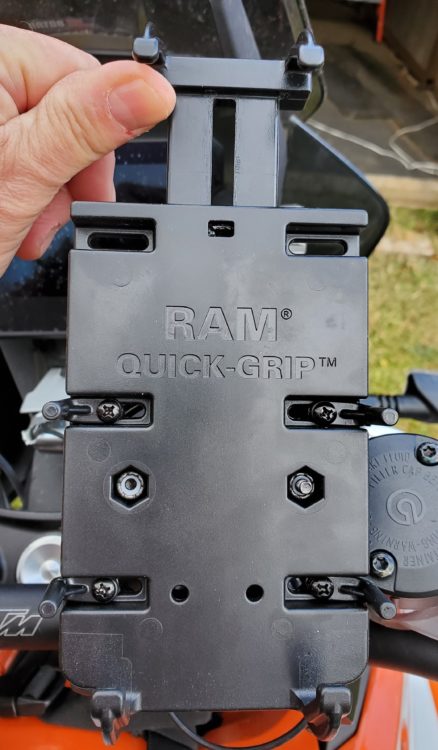 To remove the phone, all you need to do is grab the phone’s sides and lift upward against the spring tension.  Once the bottom of the phone is past the curved bottom fingers, you pull the phone outward and remove the phone.  Both inserting and removing the phone are a one-handed operation without having to remove your gloves.  Getting those quick pictures is now a simple operation, and all of your phone’s screen is available.

But ease of use is only one part of a phone mount solution.  The other and probably the most important thing is the retention of your expensive phone.  So I decided to give the RAM Quick-Grip XL mount a bit of a workout on Vermont’s twisty and bumpy paved roads as well as our pothole-filled and sometimes washed out dirt roads.

To get to those paved roads, I have to first traverse about 3 miles of steep, potholed, dirt road.  Even my driveway is a nine-degree incline.  On the way down the mountain, I took it easy and purposely ran through as many potholes as I could find.  The Quick Grip held my phone without issue. 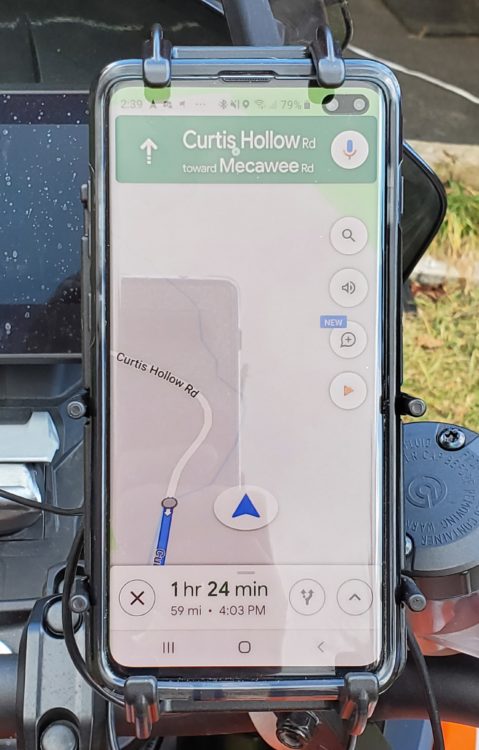 A Samsung S10 securely held in place without the need for a rubber band making it easy to quickly remove.

Once on the paved bits, I wicked the speed up a bit. Running around many corners and bumps, the mount held the phone securely without any sign of movement.  Finally, I rode back up the mountain at a much faster pace and once again concentrated on hitting as many potholes as possible. The bike bounced around somewhat, but the phone stayed entirely secure.  I am a happy camper.

Frankly, I was a bit concerned about using my phone as a test dummy.  But luckily for me, the RAM Quick-Grip XL did its job and did it well.

The Quick Grip XL  with a single ball retails for $22.99.  If you need the complete setup that includes the RAM Quick-Grip XL Phone Mount with a ball, a short extension arm, and a U-Bolt base, it will set you back $54.99.

In my mind, it’s money well spent on convenience and security.