Quick, what’s the most successful Japanese V-twin naked bike, ever? If you answered the Suzuki SV650, you’d be correct. The SV650 has been in production, more or less, since 1999, along with its derivatives (the Gladius, the V-Strom 650 and now the SV650X). Really, it could be the most successful naked V-twin of all time, with only the Ducati Monster series as real competition (unless you count the Harley-Davidson Sportster line as nakeds, not cruisers—that’s an argument for another day).

However, it wasn’t all sunshine and roses for Suzuki in this market. Its first attempt to sell a naked V-twin was met with very mixed results. That bike was the VX800. It’s an interesting machine that still has a good reputation today, among the small minority of motorcyclists who actually bought one.

The VX800 was built in Japan, but designed in the US in the mid-1980s. This was a thing back then; there was so much money to be made in the US, Canada and Europe that the Big Four leaned very heavily on their dealer network to tell them what was wanted, and the Japanese manufactures also had R&D and design centres in the US. Sadly, a lot of this is gone now, as our importance to the bottom line has diminished, but this was how we got machines like the FT500 and the KZ900 LTD. And, the VX800. 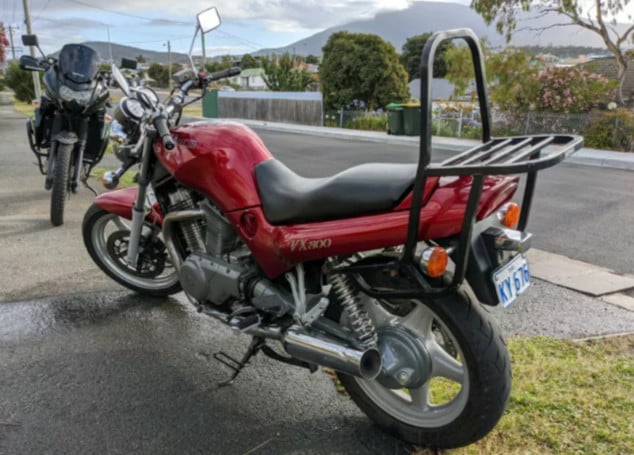 A naked bike, but definitely some hints of custom styling, like the earlier Yamaha Radian models. Photo: Gumtree

The VX800 engine was based very closely on the liquid-cooled V-twin used in the Intruder 750 cruiser. The VX had a 3 mm bigger bore, 36 mm carbs instead of the Intruder’s 34 mm carbs, and a slipper clutch, as Suzuki expected this naked bike to be banged through the gears more aggressively than the Intruder cruiser. That was a rare feature in 1990, the year the VX was released. The engine was rated for 61 hp at the crank, and 72 Nm of torque.

Like the Intruder, the VX800 had a shaft drive and five-speed gearbox. At 525 lb wet weight, it’d be on the porky side by today’s standards, but that wasn’t so bad for a shaft-drive middleweight in 1990, especially when you consider the bike’s 5.2-gallon (19.5-litre) fuel tank. Fully loaded, this machine would have a decent range, and even though it didn’t come from the factory equipped as a touring bike, it worked well in that role, if you added some bits. In that respect, it was actually very similar to Suzuki’s GS850 of a decade earlier: not terribly light, but a well-built machine with everything a touring enthusiast needed except windshield and baggage. However, talking to former owners and journos, it seems most of the VXs sold didn’t end up as long-haul machines, but were instead flogged through back roads, especially since aftermarket add-ons like luggage racks were basically impossible to find.

The naked bike styling meant many of these went to riders who were a little more serious about their two-wheeled endeavours than the Average Hairy Biker—those guys and girls were buying the Intruder version. And, if you talk to people who had the VX800, they typically were very happy. It was heavy, but the weight was down low, so handling wasn’t so bad. The suspension and brakes were a bit crap, but it wasn’t a race bike, so what did you expect? Reliability was generally held to be excellent. And the down-low torque was excellent, a big difference from the high-revving fours and parallel twins that were usually sold in this bracket. As it was a naked bike, the windblast eventually slowed you down, but up until you hit the ton, this was reckoned a very fun machine. 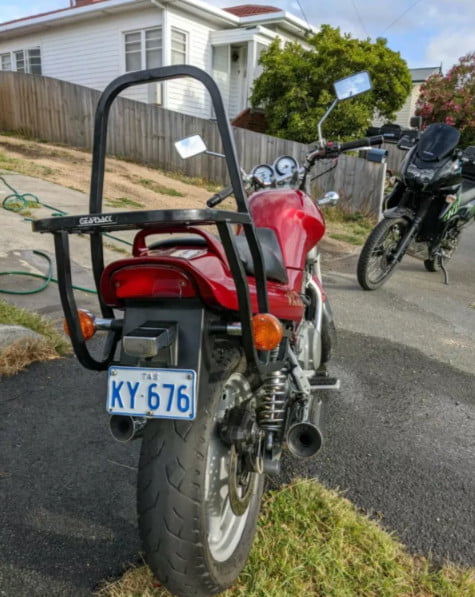 That’s a properly beefy-looking rear rack, a hard thing to find for these machines. Photo: Gumtree

But despite the positive feedback from writers and riders (there’s still an enthusiasts’ forum online today), the VX800 didn’t last long in the US market. It was discontinued in 1993. Even though it had been designed by Americans, for Americans, it actually had a longer lifespan in Europe, where it was cancelled in 1997. No doubt some lessons on the discerning choices of American riders vs. Euro riders could be learned here.

There were a few niggles with the VX; besides the weight, the bike was known to be a bit tricky to work on. The parts were all very accessible, but there wasn’t much room to fit your fingers in for things like spark plug changes and valve adjustment work. It did have a higher seat than many riders were used to, limiting cross-over sales from former cruiser riders, who preferred to have their glutes as close to the pavement as possible.

But most of all, it was a classic case of the right idea at the wrong time. Suzuki got the formula right in 1999 with the SV, and for better or worse, has never looked back since. 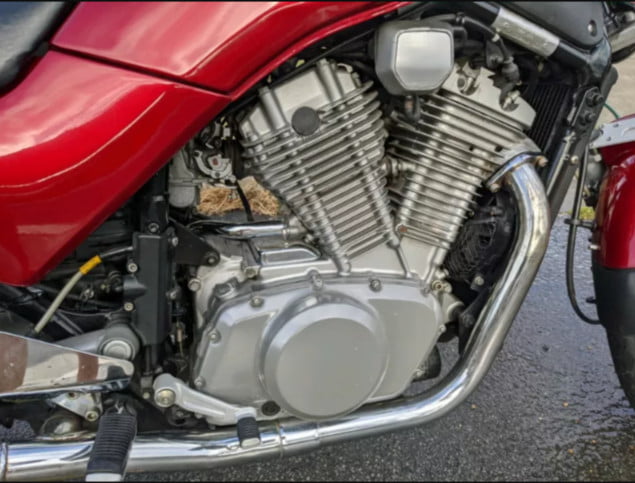 That’s a cruiser engine, for sure, but plenty of fun in the VX chassis. There were slight variations of the VX between the Euro, Japanese and American markets, including crankpin angle. Photo: Gumtree

Now, this here 1990 model, for sale in Lutana, Australia, isn’t exactly being given away, with a $2,700 AUD asking price. However, it’s one of those classic “selling it for my dad” deals, so maybe you could knock the price down a fair bit after some in-person haggling. It does appear to be in pretty decent shape, and has a hard-to-find luggage rack (it looks fairly sturdy). Add in a generic handlebar-mount windshield, and you’d have a low-cost tourer. Or you could just use it to strafe the back roads of Australia, like the original designers intended.

It’s Always Been A Good Idea To Wear A Helmet”