So you want to ride the Trans-Labrador Highway, the most accessible wilderness adventure ride on North America’s eastern seaboard. What do you need to do to prep your bike?

First, you need to think about what you’re going to tackle: a long highway that’s mostly paved, with three extended gravel sections (if you count the two sections on Quebec’s Rt. 389). You can ride for hundreds of miles without seeing a town or gas station, and you’ll almost certainly hit crappy weather.

In reality, you could take plenty of street motorcycles across the Trans-Lab with minimal modification. A sportbike, maybe not, but a standard motorcycle like a Triumph Bonneville or Honda CB500 or similar could do it, as long as you used the knobbiest tires you could find, and took it easy (or took the day off) if you encountered greasy gravel due to rain. I’ve heard of a KZ1000 doing the trip, which is about as far from an adventure bike as you can get.

But it wouldn’t be much fun banging through the bumpy parts with limited suspension—the increased vibration and shock means stuff is going to break or fall off. Instead, most sensible people are going to take a dual sport or an adventure bike. Here’s how you want to set it up: 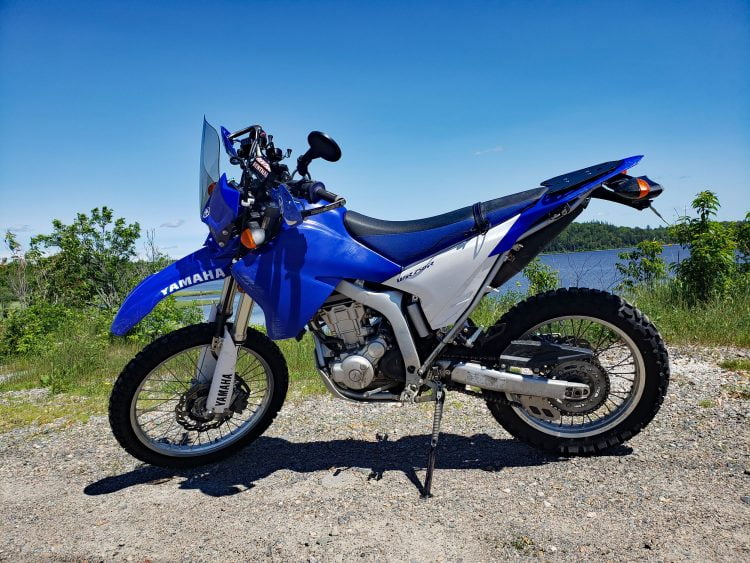 I didn’t fuss too much about getting super-knobby tires, but I did make sure I had new rubber on before I left. I made sure the rims were straight and the spokes were tight, too. Photo: Zac Kurylyk

You don’t need earth-shredding knobbies to do the Trans-Lab, but you want a set of tires that can handle soupy gravel—a 90/10 tire at a minimum. Something like a big block tire will work; a 50/50 tire like a Kenda K270 or Shinko 244 will offer you some peace of mind if the rain makes a big mess of the unpaved sections. Last summer, I ran Dunlop D605s, and only found them wanting in areas where road dust had turned to deep, fine sand. Just make sure they’re new when you leave, because you won’t find easy replacements in Churchill Falls.

Because you aren’t bashing along tree-filled trails, you don’t need hardcore handguards or rally-style footpegs. Having said that, handguards are always a good idea on an ADV bike or duallie anyway, in case a tipover far from home breaks a lever. A sensible person would bring a spare clutch and throttle cable (I didn’t), because breaking a cable in the middle of Labrador is going to ruin any timetable you have planned. And you definitely will want heated grips if you start riding in the rain in Labrador. Even a set of wrap-around grips, like the ones Oxford offers, are better than nothing (and much easier to install).

The meekest, mildest dual sport will handle the Trans Lab just fine—no need to upgrade shocks or springs. However, if you’re going to be strapping on lots of luggage, you should jack up the preload on your rear shock. 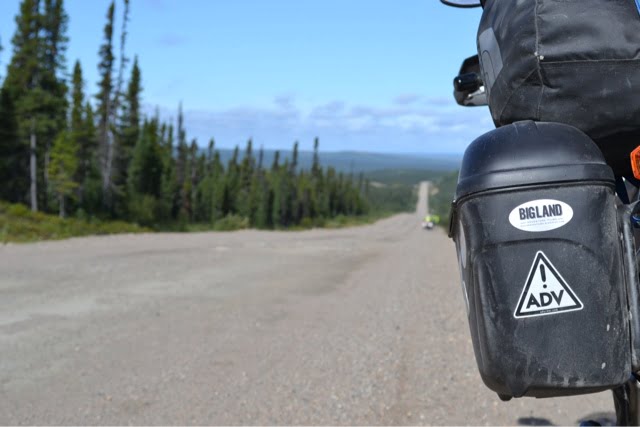 Speaking of luggage, the Trans Lab isn’t terribly rugged, so a set of hard bags will work fine, although the constant vibration may weaken hard luggage mounts (check them regularly). But, match your luggage to your bike. When I rode the Trans Lab last summer, I was on a small-capacity Yamaha WR250R, and didn’t want the added weight of heavy panniers. For that reason, I used Giant Loop’s Coyote tailbag, Tillamook dry bag, Diablo tank bag and Possibles pouch to haul all my clothes, camping gear, cooking kit, tools and other assorted gear. While I suppose you can be robbed anywhere in the world, you barely meet anyone on the Trans Lab, and the people you do meet are invariably super-friendly, so the chances of someone cutting into your soft luggage are basically nil. So, you’re probably better off with soft luggage, as the road isn’t as hard on it, and it’s less expensive.

This is a long trip along public roads, not an enduro ride. A windscreen will keep the weather off you, and if your bike doesn’t have one, look into adding one. 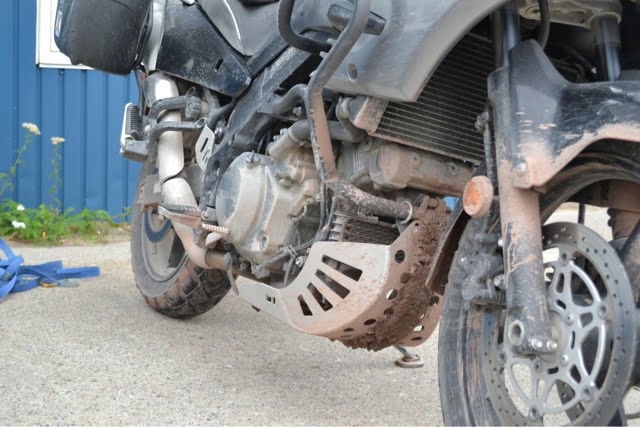 You might not need a skid plate, but on a bike like a V-Strom, with those breakable bits hanging in the breeze, armour like this will give you peace of mind. Photo: Terry Burt

If you’re close to that 450 mark, then you can just buy a small jerry can en route and use it to augment your bike’s gas tank in the extended sections. But once you’re done with it, don’t keep it filled up. Having excess fuel sloshing around, poorly secured, is asking for trouble.

If your bike doesn’t have anywhere close to 450 km of range, you should consider a larger fuel tank. Sure, you could use a five-gallon jerry can, but it’s an awfully cumbersome thing to strap to your rear seat. A proper aftermarket fuel tank will be much more handy. For my ride, I installed a used 4.7-gallon IMS tank on my WR250R, giving me a range over 400 kilometers (and I still bought a small jerry can in Happy Valley-Goose Bay, just in case).

Go over the bike to make sure the bearings and cables are good, the fork seals aren’t leaky, the spokes are tight, and so on. Anything that can go wrong at home is much more likely to go wrong when you’re a thousand miles from home on a rutted dirt road. Make sure your bike is tight and squared away before leaving. A missing 25-cent bolt can cost you a day in Labrador, or worse. Loctite is your friend here.

You don’t need enduro riding gear to tackle the Trans Lab, but you do need a good rainsuit, and a couple of pairs of riding gloves (so you’ll have a dry pair to wear after it rains). A full-face helmet is preferable to an enduro helmet with goggles; the face shield will not only be welcome when you’re looking at a day’s ride in the rain, but it will also keep more bugs out. Sturdy riding boots, preferably waterproof or with waterproof rain covers, are a good idea as well. Don’t ride this route in a pair of old sneakers.

Whatever you decide to do regarding camping versus staying at hotels, that’s your choice, and bring the gear that suits. However, you should have the capability to survive a night in the woods, if necessary (an emergency poncho, or something like that), even if you aren’t camping. And whatever you do, don’t forget to bring a bug net. You can go with the simple head net, but a full body suit is even better, especially if it has a mesh hood. Wear it under your riding gear, and when you remove your helmet at a stop, slip the hood over your head quickly.