Having had a few different adventure-style helmets over the years, I wanted to go a different route for my 2020 trip across Labrador. Instead of the typical enduro-style lid, I wore an open-face helmet, the Arai Ram-X.

The Ram-X is a new helmet, released to much ballyhoo earlier this year. Arai wants to position the Ram-X as its top-tier open-face. It replaces the CT-Z and XC helmets; the XC-W seems to be available still, but isn’t something Arai is pushing.

What makes the Ram-X special? Basically, Arai took the Corsair, one of its top full-face street helmets, and cut it down into a three-quarters helmet. That means you’re giving up the protection of the chinbar, but you’ve got the other stuff that makes Arai’s full-faces great: a stiff composite shell (developed from the Quantum-X and Signet-X ), multi-density EPS liner, an efficient ventilation system, great visibility, high-end fit and finish, and the Pro Shade visor system. The Ram-X also uses Arai’s new VAS-Z face shield system, which sounds like a medical procedure for men but is actually a (theoretically) smoother-operating opening system, and supposed to be superior to hinky Arai face shields of old. And, the Ram-X carries a Snell safety rating.

In other words, this isn’t one of the ’70s-inspired three-quarters helmets that other manufacturers are flogging to cafe racer “builders,” whose main criteria is that their helmet fit over a pair of Wayfarers.

Nevertheless, despite the engineering and high-end materials, riders using this helmet must be willing to risk riding with less protection than a full-face helmet. Depending who you ask, there’s about a 15 per cent chance of landing on your jaw when you crash a bike. That’s a roughly one-in-six chance that a crack-up could leave you with nasty facial disfiguration in an open-faced helmet.

That’s one way of looking at it. The other way of looking at it is, every time you get on a bike, you run the risk of getting run over by a soccer mom. Everyone has to decide their own acceptable level of risk, and in my case, I decided to try the Ram-X for the summer. I hadn’t worn an open-face helmet extensively since my college days, and I wanted to see if it was more comfortable for slow-paced adventures. Short answer: Yes, it’s great.

I took the risk because I wanted a lid that made it easy to meet people on the road. Instead of being jammed into a full-face helmet where people could only see my eyes, I’d be able to talk to them easily without removing my helmet. It would also be nice to be able to breathe a little more easily, and eat or drink without having to open my helmet. And yes, a modular helmet can do some of this stuff as well, but I mostly wanted the “openness” of an open face. 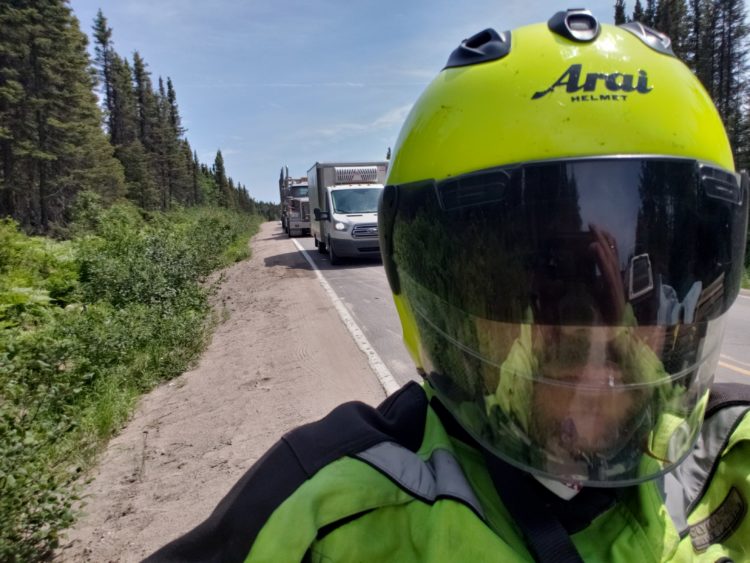 A roadside selfie in northern Quebec, with the Pro Shade shield flipped down. I found this shield worked extremely well, although its exposed position on the outside of the helmet means you now have two shields to clean. This is a problem for some riders, who prefer internal sun shields. Photo: Zac Kurylyk

Other than vulnerability in a crash, my main concern was insects: the open design would pose little barrier to black flies and the other ravenous bugs along the Trans Labrador Highway.

In the end, it turned out I never tested the helmet’s crashability (thankfully), and the bugs weren’t any more of a problem than they would have been in a full-face helmet. Maybe they were less of a problem—with the open face design, it was easy to flip up the shield and blow them away with the bike’s windblast at speed, instead of having a horde of flies hiding inside the chinbar.

Amongst professional motojournos, there’s considerable antipathy towards Arai’s Pro Shade system, which is an exterior-mounted drop-down sunshade. Well, I understand some of their complaining, but I must say I found the Pro Shade was much easier to work than some of the fidgety internal sunshades on other helmets. And, if the Pro Shade gets dirty, it’s easy to clean. I don’t know that I’d trust it for days of riding in sand and dust, but for a semi-civilized rip around Labrador, it more than did the trick. 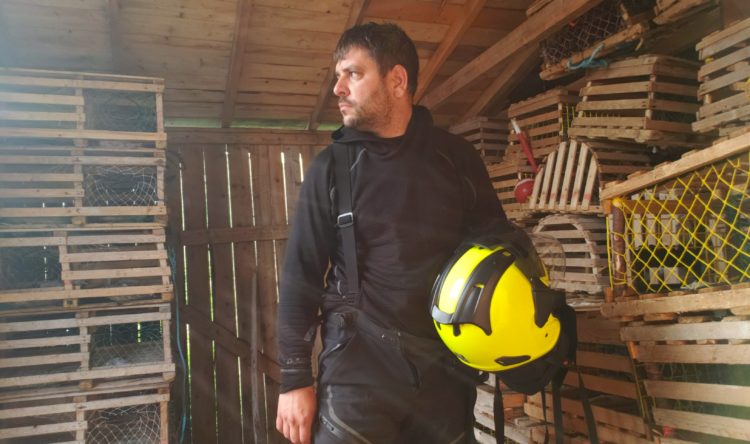 The Arai Ram-X proved to be a pretty decent touring helmet, as it made chatting with other travelers easy. If you want to ask someone if you can sleep in their shed, it helps if they can see your face, even if it’s a face as grim-looking as this. Photo: Zac Kurylyk

Generally speaking, Labrador isn’t a great place to test how well a helmet works in heat, but in my more southerly adventures this year I found the Ram-X vented air extremely well (with four vents, it should!), and the open-face design made for excellent summer comfort. The design also prevents some of the funk that tends to build up in helmets worn over long hours in warm temperatures (the lining is removable for washing if it starts to get stinky). At speed, Arai’s round exterior design minimizes unpleasant buffeting. Overall, it’s a helmet that’s easy to wear all day, every day.

As the miles went by, I was falling more and more in love with this helmet, and then things took a sharp turn sideways. On the road in Labrador, I went to flip the shield up to catch a breath of fresh air … and one side of the shield detached. It’s never good if your helmet falls apart while riding, and even worse if it happens in the middle of absolutely nowhere. 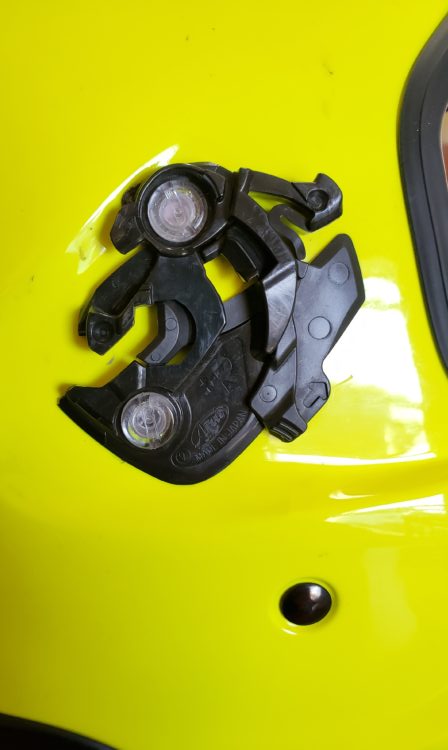 While I never got a straight answer about the helmet malfunction, I believe the screws holding this plate were backed off enough that it wiggled around too much, causing the problem. My replacement helmet appeared to have Loctite here. The problem could have simply arisen because I may have originally been sent a pre-production version. Such issues are not unheard of in the motojournalism world. Photo: Zac Kurylyk

Arai has a reputation for hard-to-assemble helmets, but I managed to get it figured out in the hotel parking lot in Churchill Falls, and went on my way. The visor continued to pop out of place occasionally, but I was able to finish my trip. Only a few days after I got home, the other side let go, and I ended up sending the helmet back to Arai for investigation.

I never got a definite answer as to what caused the helmet’s problems, but I believe the screws that held the shield attachment hardware to the side of the helmet had backed off. Arai sent me a replacement helmet, and on that replacement helmet, those screws had been reinforced with Loctite—or so it appears.

I wasn’t the only motojourno who had this problem with a Ram-X (The problem may have arisen because we were shipped pre-production units). However, I would say from my observation of the replacement helmet, and my experience with it, the issue appears to have been fixed. I wouldn’t worry about it at all, if I was looking to buy a Ram-X at this point. 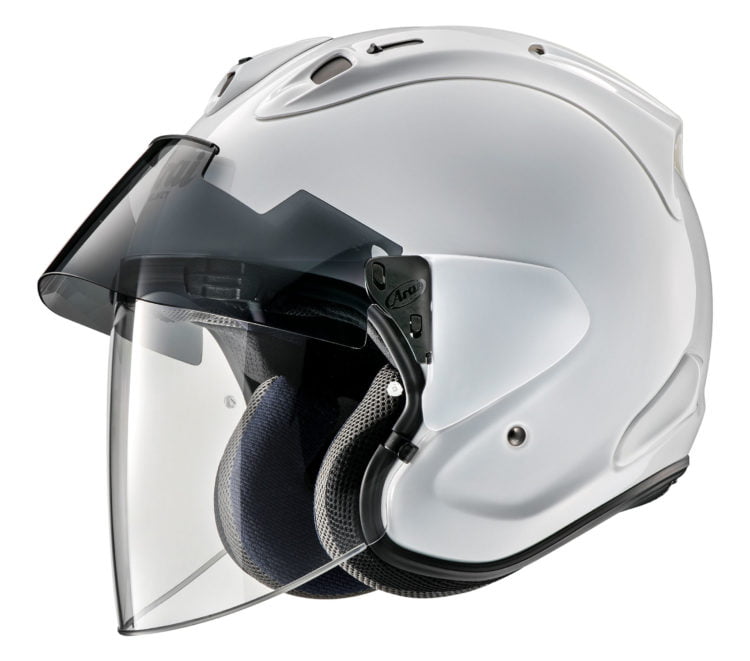 I loved the hi-viz helmet I originally got from Arai, because it was extremely noticeable. When they shipped me a replacement, I asked for this Diamond White version instead, as it is a little less garish for photography purposes. It has a gorgeous metallic white paint job, and appears to have the face shield problems fixed. Photo: Arai

Instead, I’d only really be worried about potential facial injury in a crash, and the price tag. The MSRP (in the $620 US range right now) is pretty high; equivalent helmets from Shoei or Schuberth can be had for at least $200 less. If you’re willing to go with HJC or a Chinese no-name open-face helmet, you can save even more.

Arai has many fans, though, thanks to its quality construction, gorgeous finishes and comfort. If that’s what you want, then the Ram-X is worth a look. For more details, including sizing information, visit the Arai website.